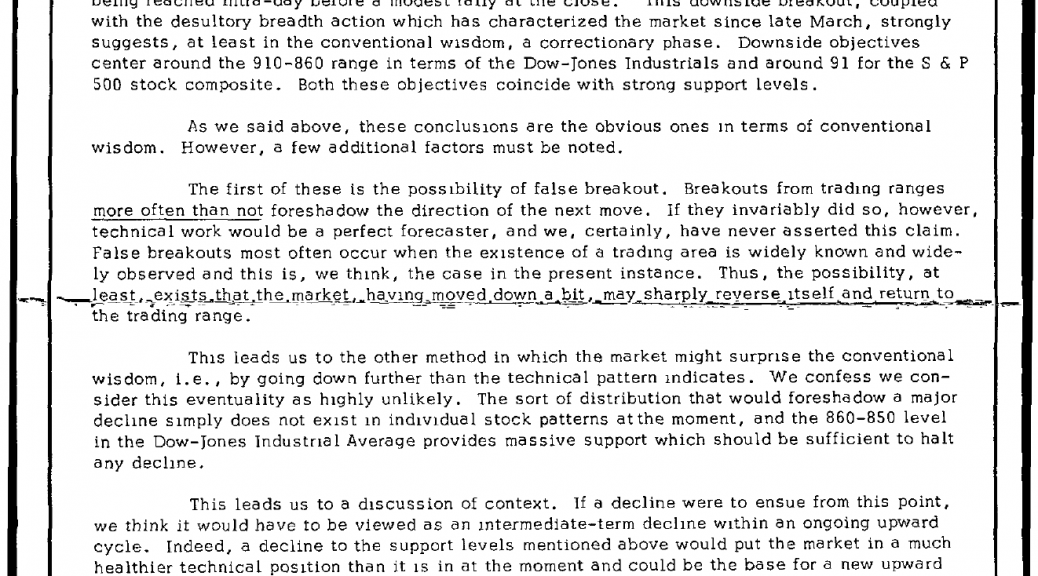 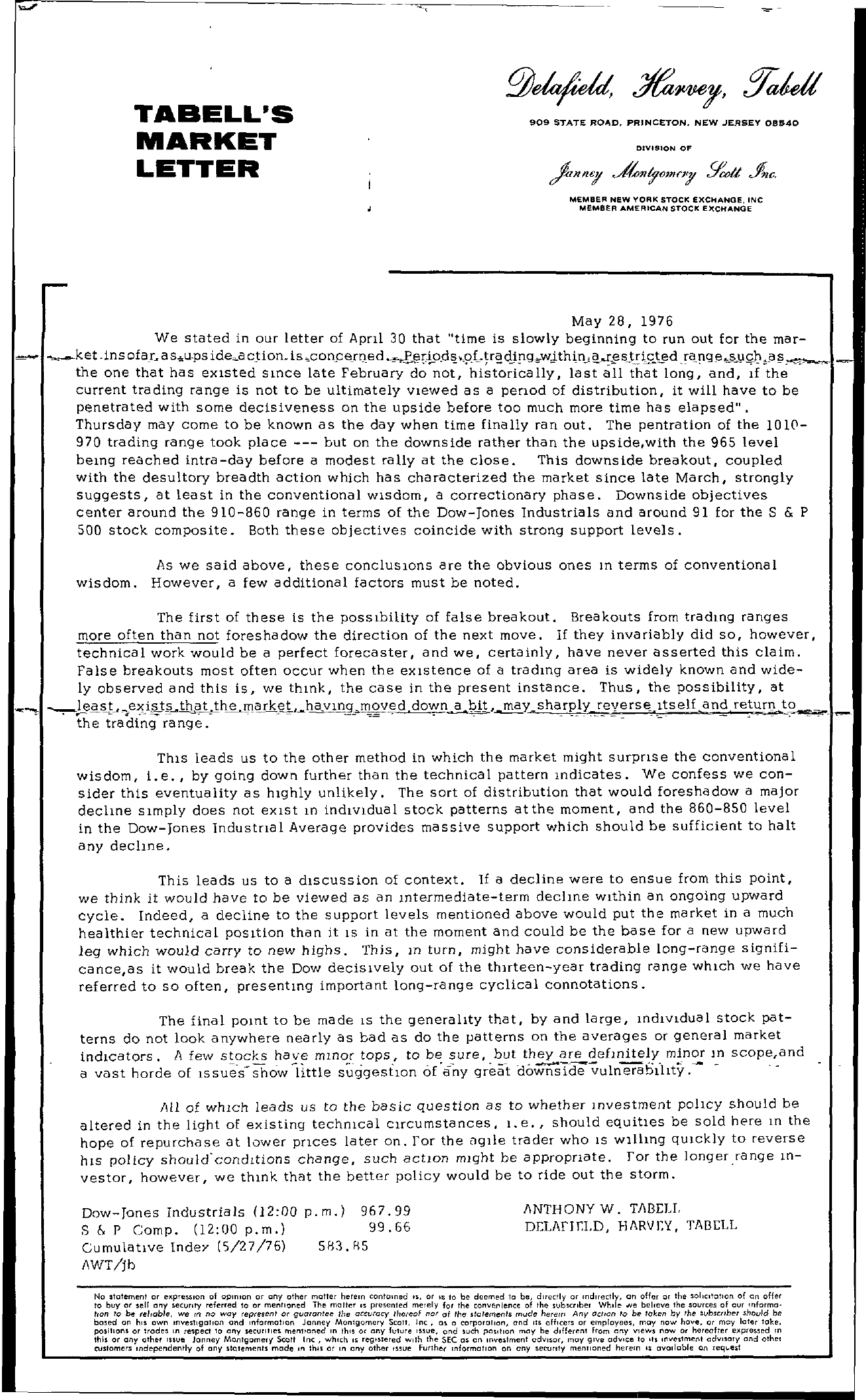 TABELL'S MARKET LETTER 909 STATE ROAD, PRINCETON. NEW JERSEY 08540 DIVISION OF MEMBER NEW YORK STOCK EXCHANGE, INC MEMBER AMERICAN STOCK EXCHANGE May 28, 1976 We stated in our letter of AprIl 30 that time is slowly beginning to run out for the mar- ket ins ofar a sups idea cJion.is ,con.cerDed …,.,l'!r-9dE; ,.pt.!r,! dJ!1g..wJthin-,.rsJrif.t.ed rngl'l.s\IQ1,.a I the one that has eXIsted swce late February do not, historically, last all that long, and, If the current trading range is not to be ultimately VIewed as a penod of distribution, it will have to be penetrated with some decisiveness on the upside before too much more time has elapsed. Thursday may come to be known as the day when time finally ran out. The pentration of the 1010970 trading range took place — but on the downSide rather than the upside,with the 965 level bewg reached intra-day before a modest rally at the close. This downSide breakout, coupled with the desultory breadth action which has characterized the market Since late March, strongly suggests, at least in the conventional wIsdom, a correctionary phase. Downside objectives center around the 910-860 range in terms of the Dow-Tones Industrials and around 91 for the S & p 500 stock composite. Both these objectives coincide with strong support levels. As we said above, these conclusIOns are the obvious ones m terms of conventional wisdom. However, a few additional factors must be noted. The first of these is the pOSSIbility of false breakout. Breakouts from tradwg ranges more often than not foreshadow the direction of the next move. If they invariably did so, however, technical work would be a perfect forecaster, and we, certainly, have never asserted this claim. False breakouts most often occur when the eXIstence of a tradwg area is widely known and wide- ly observed and this is, we thInk, the case in the present instance. Thus, the possibility, at l';j.,e)(t't;;th.atth.rT1ket,haym(L n.cved down…9…pJt,.may sharply reverse Itself and returnt the trading range. — – – — – ThIS leads us to the other method in which the market might surprIse the conventional wisdom, i.e., by going down further than the technical pattern mdicates. We confess we consider this eventuality as hIghly unlikely. The sort of distribution that would foreshadow a major declIne sImply does not eXIst w ind,v,dual stock patterns at the moment, and the 860-850 level in the Dow-Jones IndustrIal Average provides massive support which should be sufficient to halt a ny declIne. This leads us to a dIScussion of context. If a decline were to ensue from this point, we think it would have to be viewed as an wtermedlate-term declIne WIthin an ongoing upward cycle. Indeed, a decline to the support levels mentioned above would put the market in a much healthier technical pOSItion than it IS in at the moment and could be the base for a new upward leg which would carry to new highs. This, m turn, might have considerable long-range significance,as it would break the Dow deciSIvely out of the thIrteen-year trading range WhICh we have referred to so often, presentwg important long-range cyclical connotations. The final powt to be made IS the generalIty that, by and large, Wdlvldual stock patterns do not look anywhere nearly as bad as do the patterns on the averages or general market ind,cators. 1\ few stocks have mInor tops, to be sure, but they are defmitely minor In scope,and a vast horde of ISSUe-S show -little s;;ggestlOn 6rany great downsicte-';ulneraSllItY. – 1\11 of whIch leads uS to the basic question as to whether Investment polIcy should be altered in the light of existing techmcal cIrcumstances, 1. e., should equitIes be sold here In the hope of repurchase at lower prIces later on. ror the ogIle trader who IS WIllIng qUIckly to reverse h,S policy should' conditions change, such actIOn mIght be appropnate. ror the longerrange In- vestor, however, we thInk that the better policy would be to ride out the storm. Dow-Jones Industrials (1200 p. m.) 967.99 S & P Compo (1200 p.m.) 99.66 Cumulat,ve lnde)' (5/27/76) 5fl3.fl5 I\WT/jb I\NTHONY W. TI\!lLLI. DJLllrIrl.D, HI\RVI;Y, TI\!lJLL No ,Iolemenl or expreston of optnlon or any olher moiler herein conlalned IS. or ! to be deemed to be, dtrectly or Indtrectly, an offer or Ihe soltltotton of on offer to buy or sell any eunty referred 10 or menttoned The matter tS presented merely for Ihe converdenct of the subscrtber WhIle oNe bel(cve the soures of our (nforma lIon to be feltable. we In no way represent or glJarantee Ihe acclJ(ocy thereof nor of the stotements mude herem Any octlcn to Iw token by the lJb5cnber sholJld be based on hiS own tnVesligotton and tnformotlon Janney Montgomery SCali. Inc. as 0 corporation, and lIS officers or employees, may now have. or may later toke. paslhaM or trades In respect to any securities mentIoned In thIS or any future Issue, and such posillon may be different from any views now or hereofter expressed In this or any other Issue Jonney Montgomery Scott Inc, whlh IS regISTered With the SEC as on Investment adVisor, may give adVIce to .t Ivestment adVisory and olhel customers Independently of ony statements modc In thu or In any olher Issue Further information on any setuflly menlloned herein IS available on req\..est