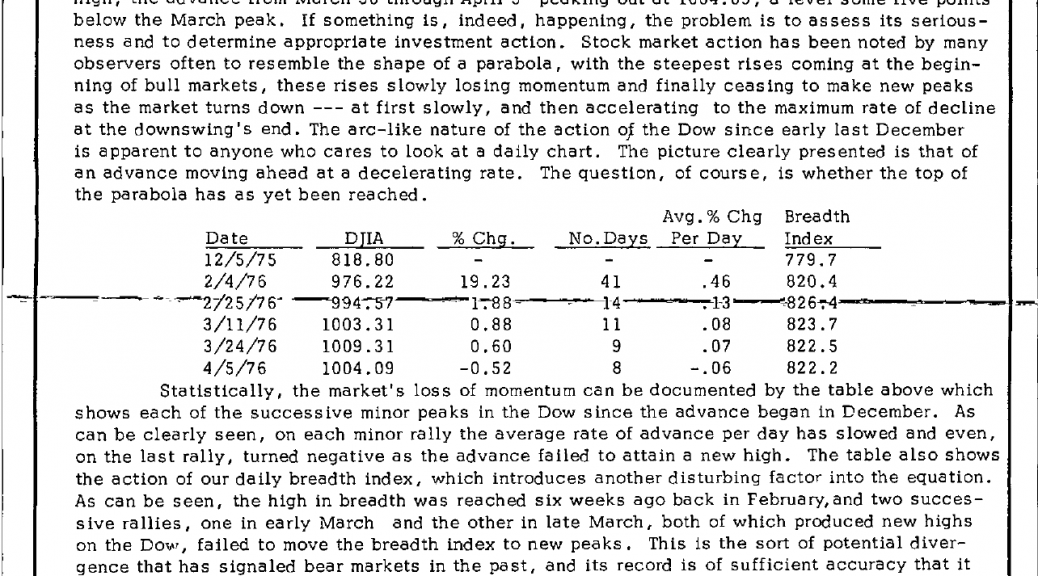 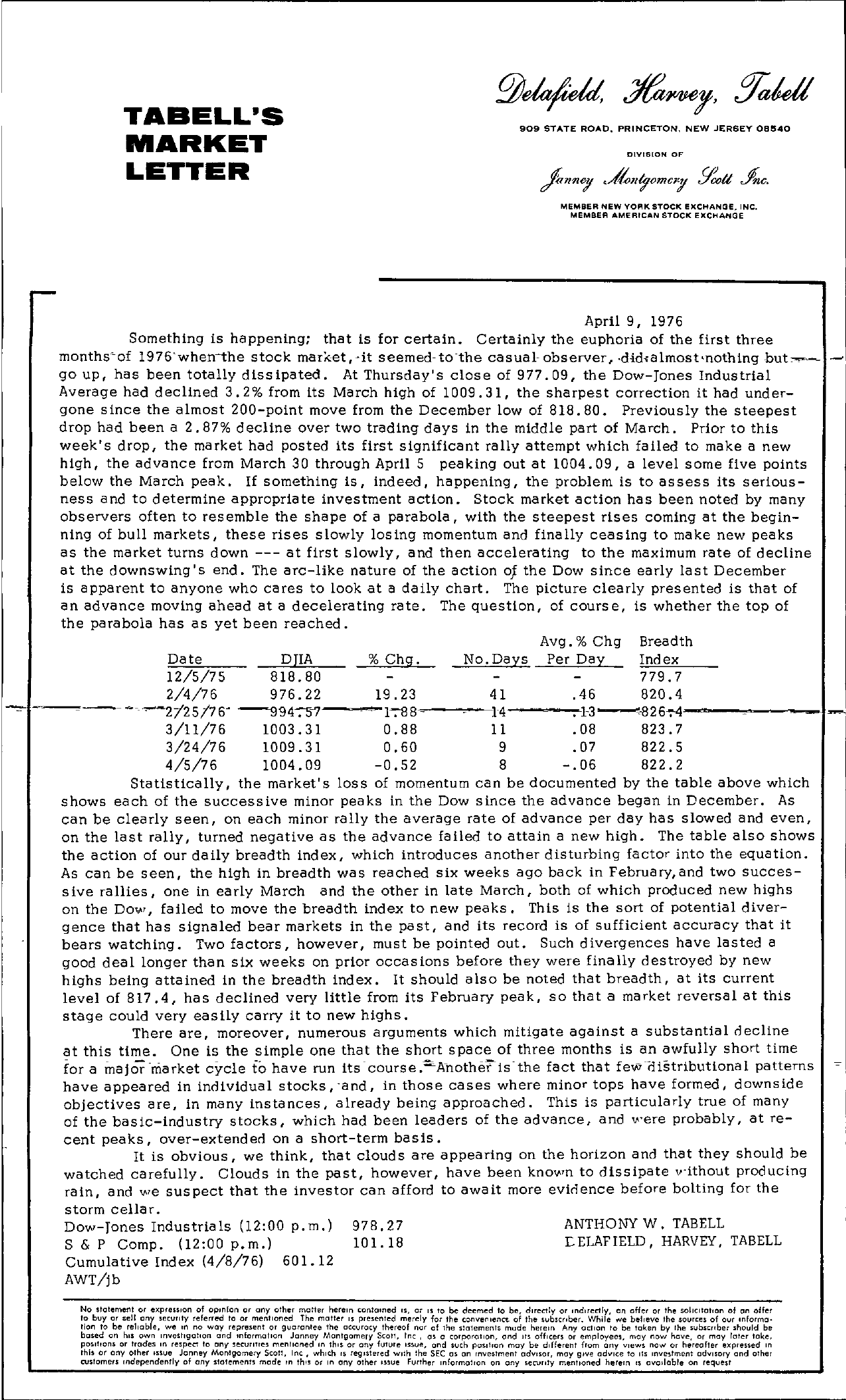 TABELL'S MARKET LETTER 909 STATE ROAD. PRINCETON, NEW JERSEY 08540 DIVISION OF MEMBER NEW VOAK STOCK EXCHANGE, INC. MEMBEFI AMERICAN STOCK EXCHANGE April 9, 1976 Something is happening; that is for certain. Certainly the euphoria of the first three monthscof 1976'whenthe stock maret, it seemed- to-the casual- observer, -d-id,almost'nothing -bub.– go up, has been totally dissipated. At Thursday's close of 977.09, the Dow-Jones Industrial Average had declined 3.2 from its March high of 1009.31, the sharpest correction it had under- gone since the almost 200-point move from the December low of 818.80. Previously the steepest drop had been a 2.87 decline over two trading days in the middle part of Ma rch. Prior to this week's drop, the market had posted its first significant rally attempt which failed to make a new high, the advance from March 30 through April 5 peaking out at 1004.09, a level some five points below the March peak. If something is, indeed, happening, the problem is to assess its serious- ness and to determine appropriate investment action. Stock market action has been noted by many observers often to resemble the shape of a parabola, with the steepest rises coming at the begin- ning of bull markets, these rises slowly losing momentum and finally ceasing to make new peaks as the market turns down — at first slowly, and then accelerating to the maximum rate of decline at the downswing's end. The arc-like nature of the action oj the Dow since early last December is apparent to anyone who cares to look at a daily chart. The picture clearly presented is that of an advance moving ahead at a decelerating rate. The question, of course, is whether the top of the parabola has as yet been reached. Avg. Chg Breadth Date 12/5/75 D!IA 818.80 Chg. No.Days Per Day Index 779.7 – 2/4/76 976.22 — –Z125!76 94707 19.23 1788 41 .46 820.4 14 .1-3-826,,4 3/11/76 3/24/76 1003.31 1009.31 0.88 0.60 11 .08 823.7 9 .07 822.5 4/5/76 1004.09 -0.52 8 -.06 822.2 Statistically, the market's loss of momentum can be documented by the table above which shows each of the successive minor peaks in the Dow since the advance began in December. As can be clearly seen, on each minor rally the average rate of advance per day has slowed and even, on the last rally, turned negative as the advance failed to attain a new high. The table also shows the action of our daily breadth index, which introduces another disturbing factor into the equation. As can be seen, the high in breadth was reached six weeks ago back in February, and two succes- s ive rallies, one in early March and the other in late March, both of which produced new highs on the Dow, failed to move the breadth index to new peaks. This is the sort of potential diver- gence that has signaled bear markets in the past, and its record is of sufficient accuracy that it bears watching. Two factors, however, must be pOinted out. Such divergences have lasted a good deal longer than six weeks on prior occasions before they were finally destroyed by new highs being attained in the breadth index. It should also be noted that breadth, at its current level of 817.4, has declined very little from its February peak, so that a market reversal at this stage could very easily carry it to new highs. There are, moreover, numerous arguments which mitigate against a substantial decline at this time. One is the simple one that the short space of three months is an awfully short time tofor a major-market cycle have run its-course.CCAnotheris-the fact that few-oistributional patterns have appeared in individual stocks, -and, in those cases where minor tops have formed, downside objectives are, in many instances, already being approached. This is particularly true of many of the basic-industry stocks, which had been leaders of the advance, and V'ere probably. at re- cent peaks, over-extended on a short-term basis. It is obvious, we think, that clouds are appearing on the horizon and that they should be watched carefully. Clouds in the past, however, have been knovm to dissipate 'ithout producing rain, and we suspect that the investor can afford to await more evidence before bolting for the storm cellar. Dow-Jones Industrials (1200 p.m.) S & P Compo (1200 p.m.) 978.27 101.18 ANTHONY W. TAB ELL r; ELAF IELD, HARVEY. TABELL Cumulative Index (4/8/76) 601.12 AWT/jb No statement or expreulon of opinion or any olher matter herein contolned IS, or IS 10 be deemed 10 be, directly or indirectly, on offer or Ihe SOllCllollon of on offer to buy or sell C1ny security referred 10 or mentioned The moiler IS presented merely for the converlenC'EO of the subscrober. While e beheve the sources of our mformo- tlon to be reliable, we In no way represent or guarantee the accuracy thereof nor of the slolements mude herein Any action to be token by the subscriber should be based on hiS own Investigation and mformatlon Janney Montgomery Scoll, Inc, os a corporation, ond Its officers or employees, moy now hove, or may loter toke, poslhon, or trades In respect to any seC1.Jrllles mentioned In thiS or any future Issue, and such poslhon may be different from any Views now or hereafter expressed In this or any other asue Janney Montgomery Scolt, Inc, which IS registered With the SEC as on Investment adVisor, may gIVe adVice 10 Its Investment adVisory and other customers Independently of any statements mode In thiS or In ony other Issue Further Informal Ion on any security mentioned herern IS available on request