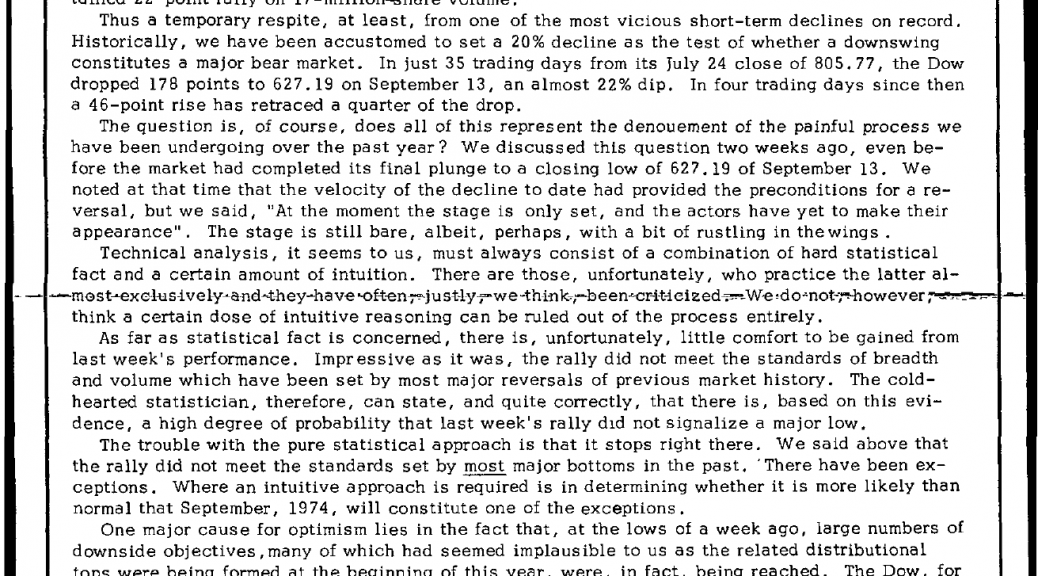 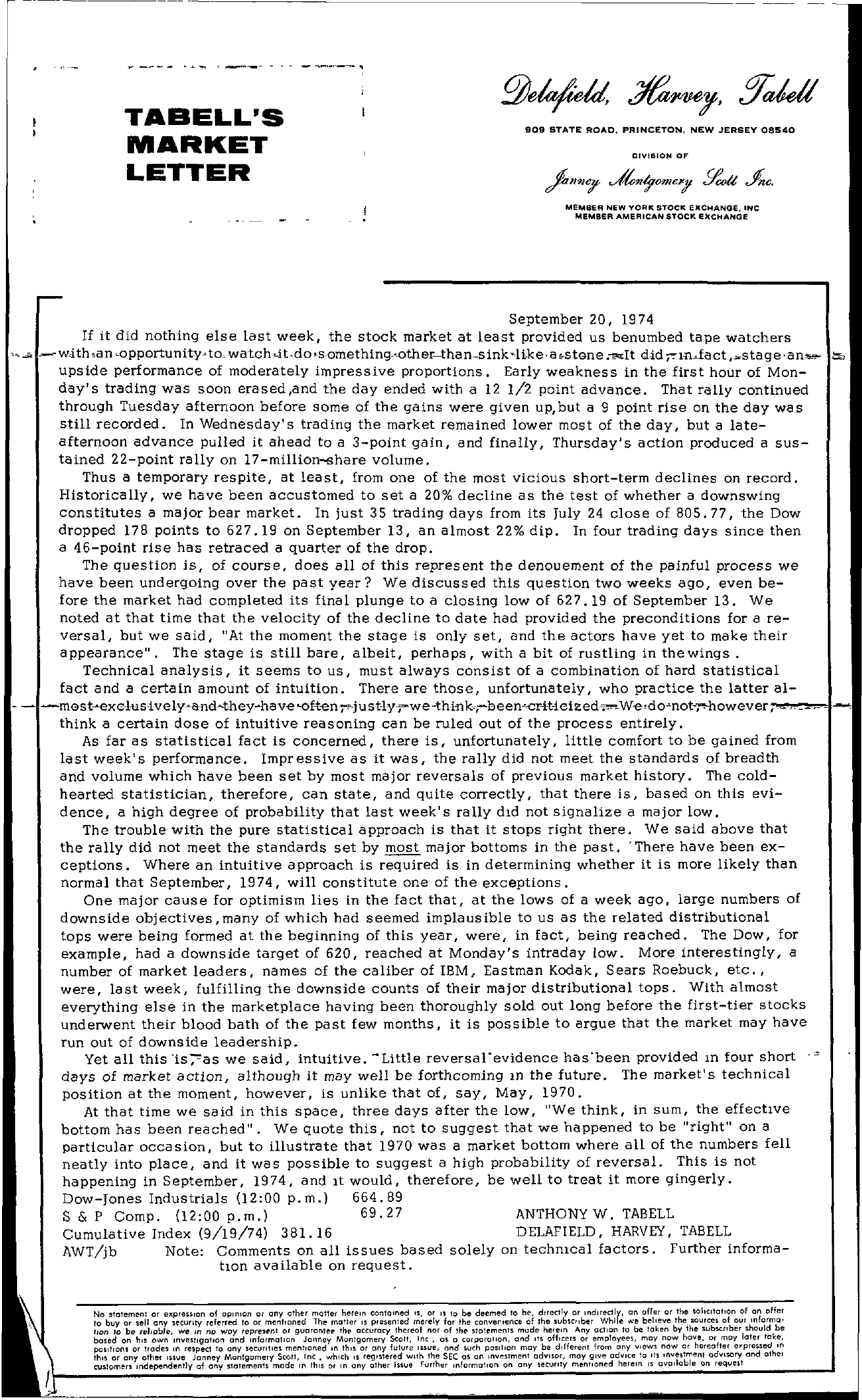 ————– ————————————– —-, TABELL'S MARKET LETTER 909 STATE ROAD, PRINCETON, NEW JERSEY 08540 DtVISION OF MEMBER NEW VORl( STOCI( eXCHANGE, INC 'EMBER AMERICAN STOCI( E)cCHANGE September 20, 1974 If it did nothing else last week, the stock market at least provided us benumbed tape watchers opportunitytoo watchit-do .s-omething–other-thansink,like, a.stone .-It did ,.,-m,fact ,stage' an upside performance of moderately impressive proportions. Early weakness in the first hour of Mon- day's trading was soon erased,and the day ended with a 12 1/2 point advance. That rally continued through Tuesday afternoon before some of the gains were given up,but a 9 point rise on the day was still recorded. In Wednesday's trading the market remained lower most of the day, but a late- afternoon advance pulled it ahead to a 3-point gain, and finally, Thursday's action produced a sus- tained 22-point rally on 17-milliol1-hare volume. Thus a temporary respite, at least, from one of the most vicious short-term declines on record. Historically, we have been accustomed to set a 20 decline as the test of whether a downswing constitutes a major bear market. In just 35 trading days from its fuly 24 close of 805.77, the Dow dropped 178 pOints to 627.19 on September 13, an almost 22 dip. In four trading days since then a 46-point rise has retraced a quarter of the drop. The question is, of course, does all of this represent the denouement of the painful process we have been undergoing over the past year We discussed this question two weeks ago, even be- fore the market had completed its final plunge to a closing low of 627.19 of September 13. We noted at that time that the velocity of the decline to date had provided the preconditions for a re- versal, but we said, At the moment the stage is only set, and the actors have yet to make their appearance. The stage is still bare, albeit, perhaps, with a bit of rustling in the wings . Technical analysis, it seems to us, must always consist of a combination of hard statistical fact and a certain amount of intuition. There are those, unfortunately, who practice the latter al- 'W,'-1-rrlO!; teJ0-ltls';ve l-yand4hey-ha ve -oHenrju st-l-y-;-we -thl-i-nk.,-beE!ncI'i-Heized,,,,,- cl onc)t-o,,o,,e'ver ,,,,,,,,…,.I-, think a certain dose of intuitive reasoning can be ruled out of the process entirely. As far as statistical fact is concerned, there is, unfortunately, little comfort to be gained from last week's performance. Impressive as it was, the rally did not meet the standards of breadth and volume which have been set by most major reversals of previous market history. The cold- hearted statistician, therefore, can state, and quite correctly, that there is, based on this evi- dence, a high degree of probability that last week's rally dId not Signalize a major low. The trouble with the pure statistical approach is that it stops right there. We said above that the rally did not meet the standards set by most major bottoms in the past. 'There have been ex- ceptions. Where an intuitive approach is required is in determining whether it is more likely than normal that September, 1974, will constitute one of the exceptions. One major cause for optimism lies in the fact that, at the lows of a week ago, large numbers of downside objectives, many of which had seemed implausible to us as the related distributional tops were being formed at the beginning of this year, were, in fact, being reached. The Dow, for example, had a downside target of 620, reached at Monday's intraday low. More interestingly, a number of market leaders, names of the caliber of IBM, Eastman Kodak, Sears Roebuck, etc., were, last week, fulfilling the downside counts of their major distributional tops. With almost everything else in the marketplace having been thoroughly sold out long before the first-tier stocks underwent their blood bath of the past few months, it is possible to argue that the market may have run out of downside leadership. Yet all this -is;'as we said, intuitive. -Little reversalevidence has'been provided In four short — days of market action, although it may well be forthcoming In the future. The market's technical position at the moment, however, is unlike that of, say, May, 1970. At that time we said in this space, three days after the low, We think, in sum, the effechve bottom has been reached. We quote this, not to suggest that we happened to be right on a particular occasion, but to illustrate that 1970 was a market bottom where all of the numbers fell neatly into place, and it was possible to suggest a high probability of reversal. This is not happening in September, 1974, and It would, therefore, be well to treat it more gingerly. Dow-fones Industrials (1200 p.m.) 664.89 S & P Compo (1200 p.m.) 69.27 ANTHONYW. TAB ELL Cumulative Index (9/19/74) 381.16 DELAFIELD, HARVEY, TAB ELL AWT/jb Note Comments on all issues based solely on techmcal factors. Further informa- hon available on request. No stalement or e)(pr&SSlon of opinion or ony other matter herein contained IS, or IS 10 be deemed 10 be, directly or Indirectly, on offer or the sol,cltotlon of on offer to buy or sell ony security referred 10 or menhoned The motter IS presented merely for the converumce of the subscriber While -Ne believe the sources of OUf Informo- tlon '0 be ,el,oble, we In no way represent Of guorontee Ihe accuracy thereof nor of the Maternenls mude herem A.ny ocllon 10 be token by Ihe subSCriber should be bosed on hiS own Investlgot,on ond information Janney Montgomery SCali, Inc, as 0 corporation, ond I officers or employees, may now have, or may later lake, POSitiOns or trodes In repecl loony securities mentioned In th,s or ony future Issue, and such pOSition dlffcrent from Clny views now or hereafter eypressed If! thiS or ony other Issue Janney Montgomery Scoll, Inc, which IS registered wllh Ihe SEC os on may give advl;e to liS Investment adVisory and othel customers mdependently of any statements mode In thiS or In ony other Issue further mformollon on mentioned herem IS available on requet