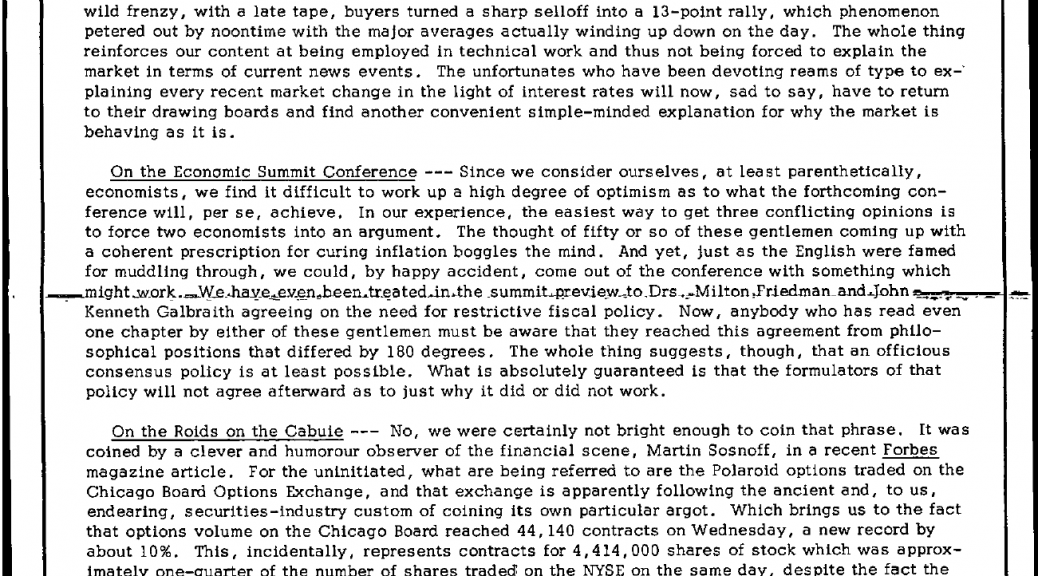 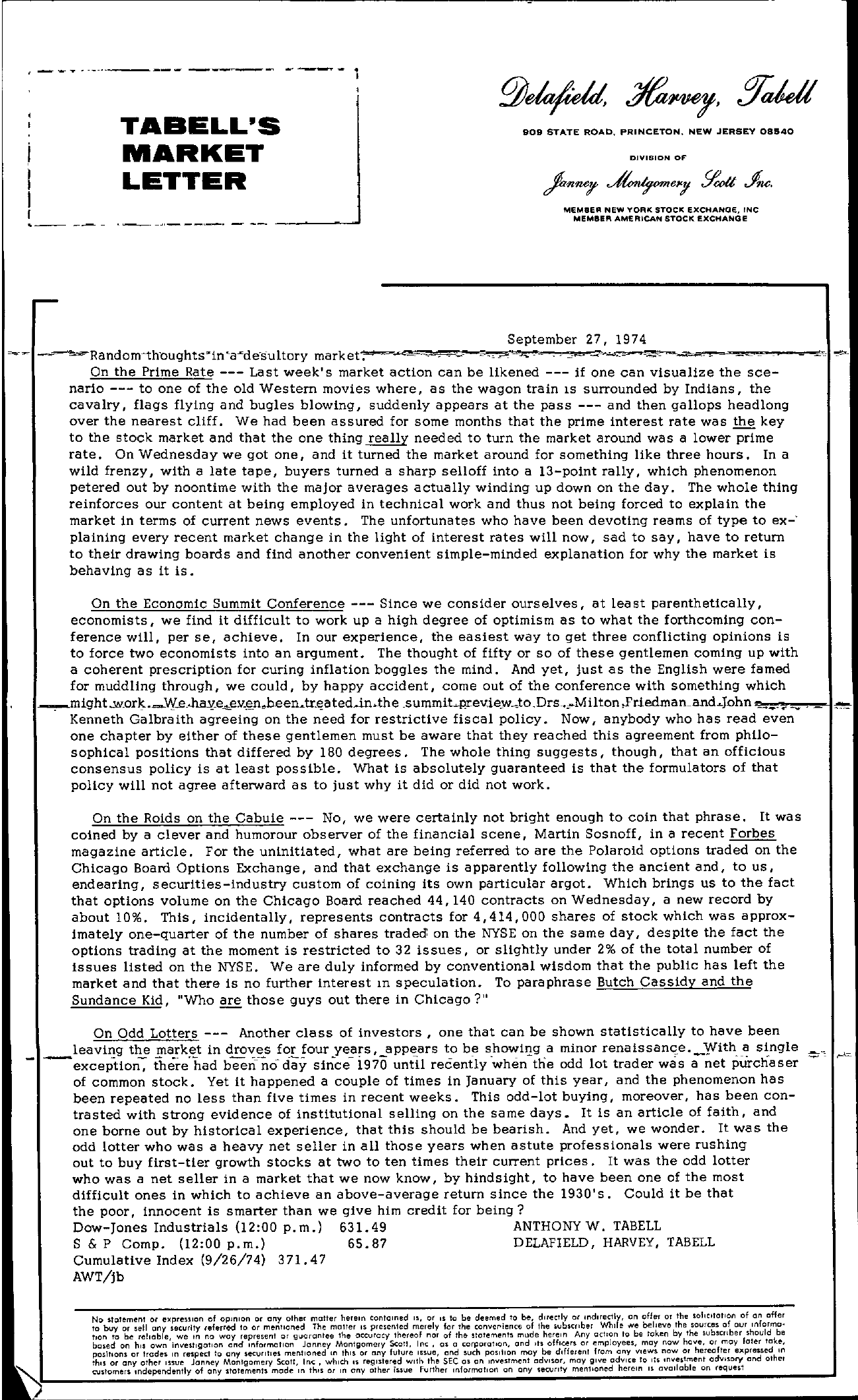 , , c , , , , i I I ( TABELL'S MARKET LETTER . . . jc c 909 STATE ROAD. PRINCETON. NEW JERSEY 08540 DIVISION OF MEMBER NEW VOAK STOCK EXCHANGe, tNC MEMBER AMERICAN STOCK EXCHANGE no du ' September 27, 1974 ' 'azd eou Itory mark ,et–''''''-''''''''''''''''…….,..,..,.,.,,,,,,,,-…,.,,,,…–,…,…………-,……'Ii .,.,.. On the Prime Rate — Last week's market action can be likened — if one can visuallze the sce- nario — to one of the old Western movies where, as the wagon train 1S surrounded by Indians, the cavalry, flags flying and bugles blowing, suddenly appears at the pass — and then gallops headlong over the nearest cliff. We had been assured for some months that the prime interest rate was the key to the stock market and that the one thing really needed to turn the market around was a lower prime rate. On Wednesday we got one, and it turned the market around for something like three hours. In a wild frenzy, with a late tape, buyers turned a sharp selloff into a 13-point rally, which phenomenon petered out by noontime with the major averages actually winding up down on the day. The whole thing reinforces our content at being employed in technical work and thus not being forced to explain the market in terms of current news events. The unfortunates who have been devoting reams of type to exC plaining every recent market change in the light of interest rates will now, sad to say, have to return to their drawing boards and find another convenient simple-minded explanation for why the market is behaving as it is. On the Economic Summit Conference — Since we consider ourselves, at least parenthetically, economists, we find it difficult to work up a high degree of optimism as to what the forthcoming conference will, per se, achieve. In our experience, the easiest way to get three conflicting opinions is to force two economists into an argument. The thought of fifty or so of these gentlemen coming up with a coherent prescription for curing inflation boggles the mind. And yet, just as the English were famed for muddling through, we could, by happy accident, come out of the conference with something which '…..,….'c.1..,..m1.1(aghcmt work .W..e.ha'ee,,en.heen.tr.a ted.in.th e summiLprev'ie.wto Drs.,M ilton ,Fdedmanand.John Kenneth Galbraith agreeing on the need for restrictive fiscal policy. Now, anybody who has read even one chapter by either of these gentlemen must be aware that they reached this agreement from philosophical positions that differed by 180 degrees, The whole thing suggests, though, that an officious consensus policy is at least possible. What is absolutely guaranteed is that the formulators of that pollcy will not agree afterward a s to just why it did or did not work. On the Roids on the Cabuie — No, we were certainly not bright enough to coin that phrase. It was coined by a clever and humorour observer of the financial scene, Martin Sosnoff, in a recent Forbes magazine article. For the uninitiated, what are being referred to are the Polaroid options traded on the Chicago Board Options Exchange, and that exchange is apparently following the ancient and, to us, endearing, securities-industry custom of coining its own particular argot. Which brings us to the fact that options volume on the Chicago Board reached 44,140 contracts on Wednesday, a new record by about 10. This, incidentally, represents contracts for 4,414,000 shares of stock which was approximately one-quarter of the number of shares traded on the NYSE on the same day, despite the fact the options trading at the moment is restricted to 32 issues, or slightly under 2 of the total number of issues listed on the NYSE. We are duly informed by conventional wisdom that the publlc has left the market and that there is no further interest 10 speculation. To paraphrase Butch Cassidy and the Sundance Kid, Who those guys out there in Chicago On Odd Lotters — Another class of investors, one that can be shown statistically to have been – leaving the market in droves for four years, appears to be showil)H a minor renaissane.With a single – exception-;- therechad beer(ilci day since i970 until recently 'when the odd lot trader was a net purchaser of common stock. Yet it happened a couple of times in January of this year, and the phenomenon has been repeated no less than five times in recent weeks. This odd-lot buying, moreover, has been con- trasted with strong evidence of institutional seillng on the same days. It is an article of faith, and one borne out by historical experience, that this should be bearish. And yet, we wonder. It was the odd lotter who was a heavy net seller in all those years when astute professionals were rushing out to buy first-tier growth stocks at two to ten times their current prices. It was the odd lotter who was a net seller in a market that we now know, by hindsight, to have been one of the most difficult ones in which to achieve an above-average return since the 1930's. Could it be that the poor, innocent is smarter than we give him credit for being Dow-Jones Industrials (1200 p.m.) 631.49 ANTHONY W. TABELL S & P Compo (1200 p.m.) 65.87 DELAFIELD, HARVEY, TABELL Cumulative Index (9/26/74) 371.47 AWT/jb I NQ stotemenl or expreulon of opinion or any other matter herein contained 15, or IS 10 be deemed to be, directly or IndHectly, on offer Of the soliCitation of on offer to buy or sell ony security referred 10 or mentioned The moiler IS presented merely for Ihe convellence of Ihe subScriber While 'He belteve the sources of our tnformo tlon to be reliable, we In no way represent or guarantee Ihe accuracy thereof nor of Ihe stolements mude herein Any oellon to be token by the subscriber should be bosed on hiS own investigation ond Informotlon Jonney Montgomery Scott, Inc, os a corporotlon, and Its officers or employees, may now hove, or moy later toke, posItions or trades In respect to any securilles mentioned In thiS or any future Issue, and such position may be different from any views now or hereafter e)pressed In L. t,h,nomor'anmydo'theOrd'IsOsueYOfJaOnOnYey''MOonmtg.om,e'rmyoSdc.omll,'hIn,;,,ow'hmuohoy.sor'ehg.i'stier,e,d.WFithhth.e'SmEfCoo'smoo'n,oInovoesotmoeonyt,ad.V'isotr, ymma.y,gi'voeoa'ddVh.ic,.e.too,,ItsovInovesotmbe',ntoood,v,lqsor.y,o,nd othe. . J