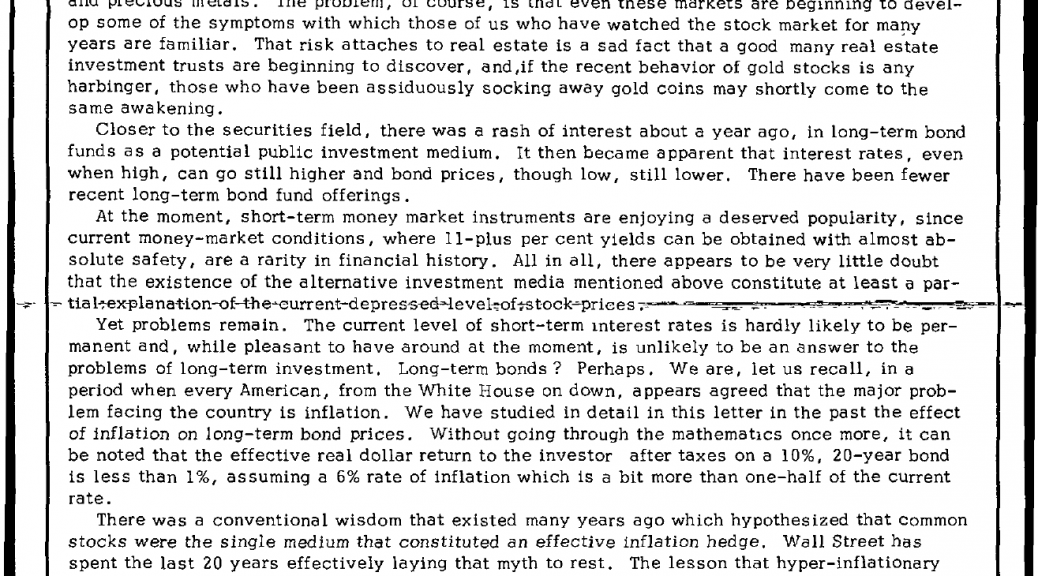 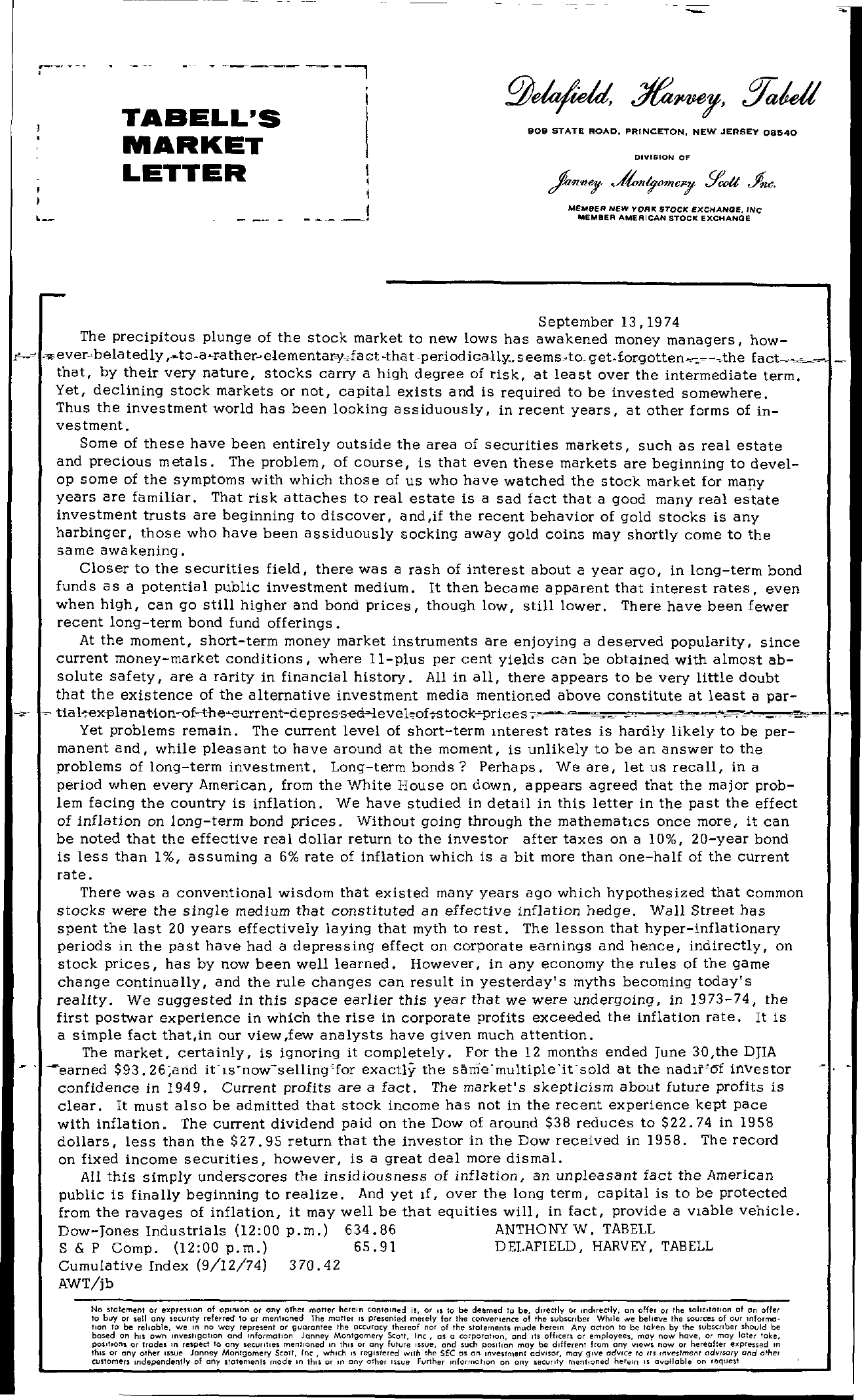 . – – – I–'– TABELL'S MARKET LETTER t, t –,- – –'I …… – 909 STATE ROAD, PRINCETON, NEW JERSEY 08540 DIVISION OF MEMSER New YORI( STOCK EXCHANQE. INC MEMBER AMERICAN STOCK EXCHANGE September 13,1974 The precipitous plunge of the stock market to new lows has awakened money managers, how– -,everbelatedly ,-tQ-afatherelementaryfact -that ,peiodica-lly.s eemsAo, get.focgotten,-.-,-the fact that, by their very nature, stocks carry a high degree of risk, at least over the intermediate term. Yet, declining stock markets or not, capital exists and is required to be invested somewhere. Thus the investment world has been looking assiduously, in recent years, at other forms of investment. Some of these have been entirely outside the area of securities markets, such as real estate and precious metals. The problem, of course, is that even these markets are beginning to devel- op some of the symptoms with which those of us who have watched the stock market for many years are familiar. That risk attaches to real estate is a sad fact that a good many real estate investment trusts are beginning to discover, and ,if the recent behavior of gold stocks is any harbinger, those who have been assiduously socking away gold coins may shortly come to the same awakening. Closer to the securities field, there was a rash of interest about a year ago, in long-term bond funds as a potential public investment medium. It then became apparent that interest rates, even when high, can go still higher and bond prices, though low, still lower. There have been fewer recent long-term bond fund offerings. At the moment, short-term money market instruments are enjoying a deserved popularity, since current money-market conditions, where II-plus per cent yields can be obtained with almost ab- solute safety, are a rarity in financial history. All in all, there appears to be very little doubt that the existence of the alternative investment media mentioned above constitute at least a par- tia l-ex-plana-t-ion-of-the-eurrent-depres's-ecllevehof-stockpriees – – ' ' -, – – – , . . – — ., – – Yet problems remain. The current level of short-term mterest rates is hardly likely to be per- manent and, while pleasant to have around at the moment, is unlikely to be an answer to the problems of long-term investment. Long-term bonds Perhaps. We are, let us recall, in a period when every American, from the White House on down, appears agreed that the major prob- lem facing the country is inflation. We have studied in detail in this letter in the past the effect of inflation on long-term bond prices. Without going through the mathematIcs once more, it can be noted that the effective real dollar return to the investor after taxes on a 10, 20-year bond is less than 1, assuming a 6 rate of inflation which is a bit more than one-half of the current rate. There was a conventional wisdom that existed many years ago which hypothesized that Common stocks were the single medium that constituted an effective inflation hedge. Wall Street has spent the last 20 years effectively laying that myth to rest. The lesson that hyper-inflationary periods in the past have had a depressing effect on corporate earnings and hence, indirectly, on stock prices, has by now been well learned. However, in any economy the rules of the game change continually, and the rule changes can result in yesterday's myths becoming today's reality. We suggested in this space earlier this year that we were undergoing, in 1973-74, the first postwar experience in which the rise in corporate profits exceeded the inflation rate. It is a simple fact that,in our view,few analysts have given much attention. The market, certainly, is ignoring it completely. For the 12 months ended June 30,the DJIA -earned 93. 26;and it'ls'now-selling'for exactly the same'multiple'it'sold at the nadliof inVestor confidence in 1949. Current profits are a fact. The market's skepticism about future profits is clear. It must also be admitted that stock income has not in the recent experience kept pace with inflation. The current dividend paid on the Dow of around 38 reduces to 22.74 in 1958 dollars, less than the 27.95 return that the investor in the Dow received in 1958. The record on fixed income securities, however, is a great deal more dismal. All this simply underscores the insidiousness of inflation, an unpleasant fact the American public is finally beginning to realize. And yet lf, over the long term, capital is to be protected from the ravages of inflation, it may well be that equities will, in fact, provide a vlable vehicle. Dow-Jones Industrials (1200 p.m.) 634.86 ANTHONYW. TABELL S & P Compo (1200 p.m.) 65.91 DELAFIELD, HARVEY, TAB ELL Cumulative Index (9/12/74) 370.42 AWT/jb No statement or expression of oplnton or (Iny other matter herein onlolned I or 15 10 be deemed 10 be, directly or indirectly, on offer or the solicitation of on offer 10 buy or sell ony security referred 10 or menlloned The motter IS presented merely for Ihe converlena of the subscriber While we believe Ihe sources of our information to be reliable, we In no way represent or guarantee Ihe accuracy thereof nor of the stotements mude herein Any actIOn to be taen by Ihe subscriber should be based on hiS own Investlgollon and Information Janney Montgomery Scott, Inc, as a corporalton, and Its offlcer or employees, may now have, or may later toke, poslhons or trades In respect to ony securities mentioned In this or any future Issue, and such posl\ion may be different from ony views now or hereafter expressed In this or ony other Issue Janney Montgomery 5col1, Inc, which IS registered wllh Ine SEC as on Inveslmenl advl5ar, may give adVICe to .ts Investment adVISOry and othel customers Independently of any statements mode In thiS or ' any olher luue Further infOrmation on ony secur,ly mentioned herem IS ovallable on request