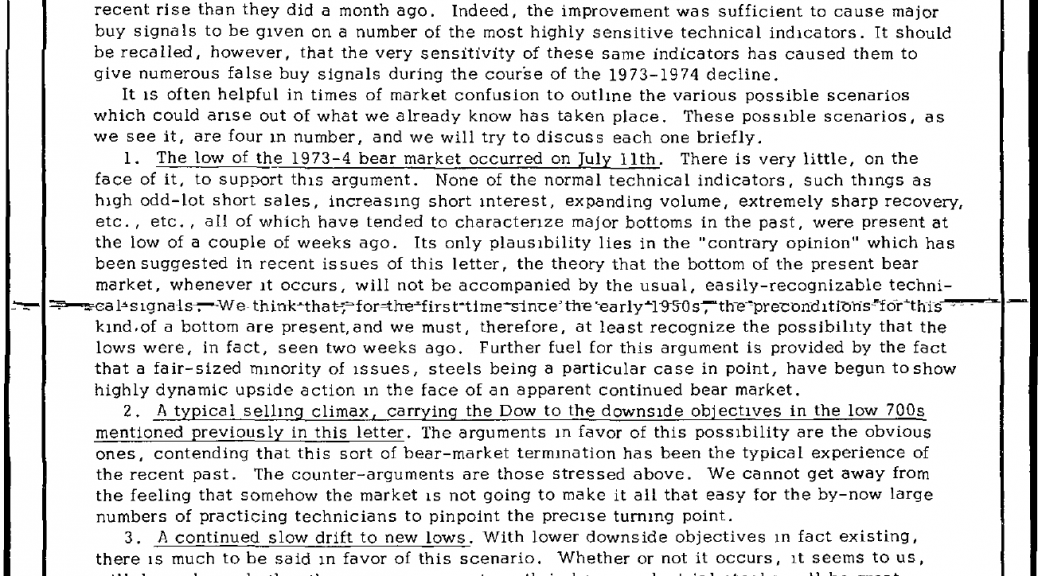 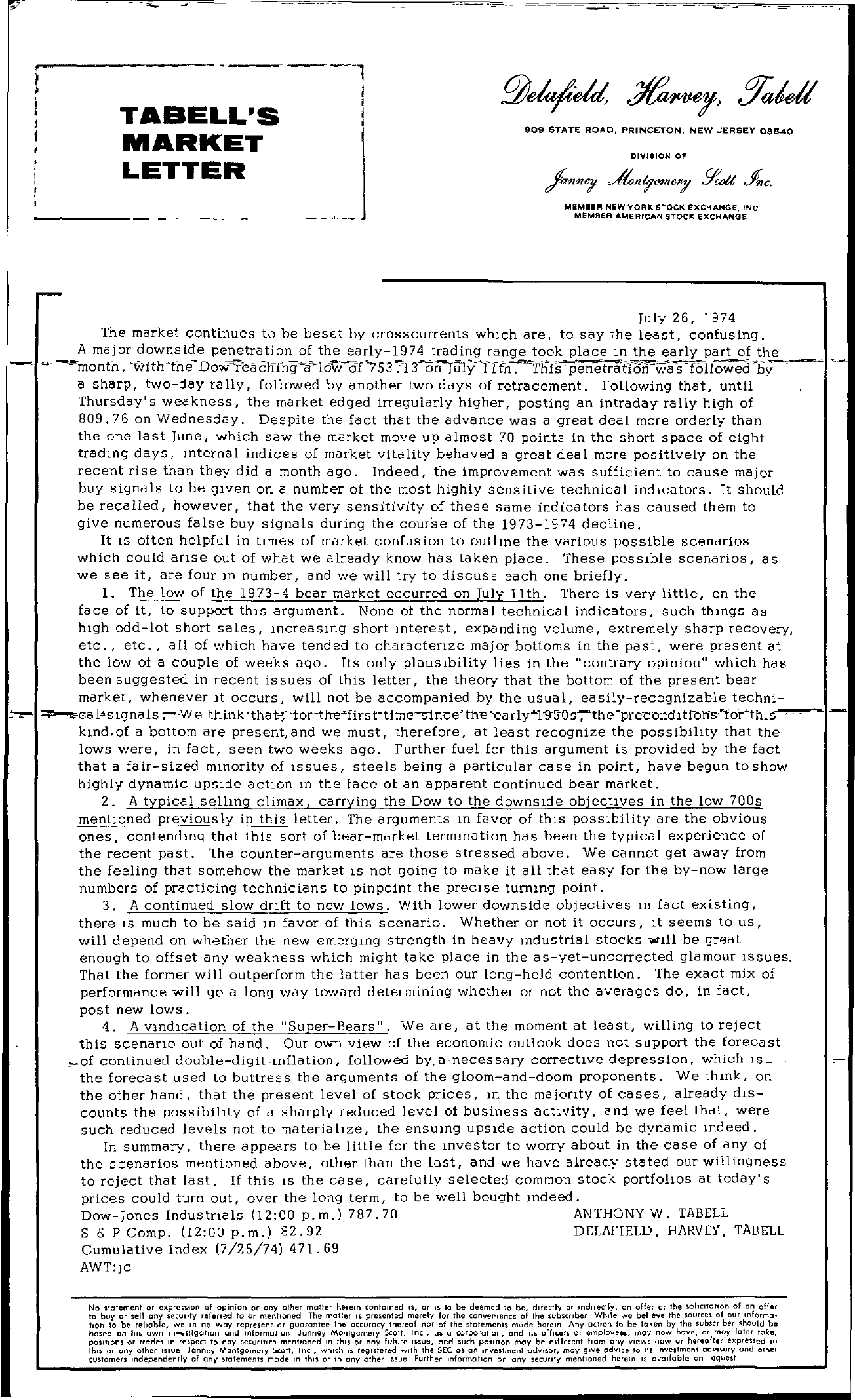 — — —, TABELL'S MARKET LETTER —— – – —- —- —- – 909 STATE ROAD, PRINCETON, NEW JERSEY 08540 DIVI910N OF MEMBER NEW YORK STOCK EXCHANGE, INC MEMBER AMERICAN STOCK eXCHANGE July 26, 1974 The market continues to be beset by crosscurrents whlCh are, to say the least, confusing. A major downside penetration of the early-1974 trading range took place in the early part of the – month, 'wi th 'the DoW'rea cnTnga'low' of '7 53 13oiijulY-'rf th-Thi'i;- penetrat16fi-W'a s -fflowed b2y—1 a sharp, two-day rally, followed by another two days of retracement. Following that, until Thursday's weakness, the market edged irregularly higher, posting an intraday rally high of 809.76 on Wednesday. Despite the fact that the advance was a great deal more orderly than the one last June, which saw the market move up almost 70 points in the short space of eight trading days, Internal indices of market vitality behaved a great deal more positively on the recent rise than they did a month ago. Indeed, the improvement was sufficient to cause major buy signals to be glven on a number of the most highly sensitive technical ind1cators. It should be recalled, however, that the very sensitivity of these same indicators has caused them to give numerous false buy signals during the cour'se of the 1973-1974 decline. It 1S often helpful in times of market confusion to outlIne the various possible scenarios which could anse out of what we already know has taken place, These poss1ble scenarios, as we see it, are four In number, and we will try to discuss each one briefly. 1. The low of the 1973-4 bear market occurred on July 11th. There is very little, on the face of it, to support th1s argument. None of the normal technical indicators, such thIngs as h1gh odd-lot short sales, increaSIng short Interest, expanding volume, extremely sharp recovery, etc., etc., all of which have tended to charactenze major bottoms in the past, were present at the low of a couple of weeks ago. Its only plaus1bility lies in the contrary opinion which has been suggested in recent issues of this letter, the theory that the bottom of the present bear market, whenever 1t occurs. will not be accompanied by the usual. easily-recognizable techni- ,.,.. ea l's 19na-lsWe- thin-kthat-;fortlrefirs tti meSince' th'e '-ea rlyl9-S-0 s7th-e-precnnd1tiCYrisf6rthYs–,'-I kInd.of a bottom are present. and we must, therefore. at least recognize the possibihty that the lows were, in fact, seen two weeks ago. Further fuel for this argument is provided by the fact that a fair-sized mInority of 1ssues. steels being a particular case in pOint, have begun to show highly dynamic upside action In the face of an apparent continued bear market. 2. A typical selhng climax, carrying the Dow to the downs1de objectives in the low 700s mentioned previously in this letter. The arguments In favor of this poss1bility are the obviOUS ones. contending that this sort of bear-market termInation has been the typical experience of the recent past. The counter-arguments are those stressed above. We cannot get away from the feeling that somehow the market 1S not going to make it all that easy for the by-now large numbers of practicing technicians to pinpoint the preC1se turnIng point. 3. A continued slow drift to new lows. With lower downside objectives In fact existing. there 1S much to be said In favor of this scenario. Whether or not it occurs. 1t seems to us. will depend on whether the new emergIng strength in heavy Industrial stocks will be great enough to offset any weakness which might take place in the as-yet-uncorrected glamour 1ssues. That the former will outperform the latter has been our 10ng-heJd contention. The exact mix of performance will go a long way toward determining whether or not the averages do, in fact, post new lows. 4. A vInd1cation of the Super-Bears. We are. at the moment at least. willing to reject this scenano out of hand. Our own view of the economic outlook does not support the forecast of continued double-digit-Inflation. followed bY,a-necessary corrective depression. which 1S the forecast used to buttress the arguments of the gloom-and-doom proponents. We thInk, on the other hand, that the present level of stock prices, In the majonty of cases. already d1S- counts the possibihty of a sharply reduced level of bUSiness activity. and we feel that. were such reduced levels not to materiahze. the enSUIng ups1de action could be dynamic Indeed. In summary, there appears to be little for the Investor to worry about in the case of any of the scenarios mentioned above. other than the last. and we have already stated our willingness to reject that last. If this 1S the case, carefully selected common stock portfohos at today's prices could tum out, over the long term. to be well bought Indeed. Dow-Jones Industnals (1200 p.m.) 787.70 ANTHONYW. TABELL S & P Compo (1200 p.m.) 82.92 DBLArrELD, HARVLY, TAB ELL Cumulative Index (7/25/74) 471.69 AWTJc No sfatement or e)(prenlon of opinion or any other motter herem contained IS, or I to be deemed to be, dlrectly or indirectly, on offer or the sol1Cllollon of on offer to buy or sell any security referred to Or mentioned The mailer IS presented merely for the converlenCE of the subscriber While we believe the sources of our Info rma han to be reliable, we In no way represent or guarantee the accuracy thereof nor of the statf!ments mude herein Any action to be token by the subscriber shOUld be based an hiS awn investigation ond information Janney Montgomery Scott, Inc, as 0 corporation, and lIs officers or employees, may now have, or may lofer toke, poslhons or trodes In respect to any securilies mentioned In thiS or any future Issue, and such position lI'OCIy be different from any views now or hereafter expressed In thiS or ony other Issue Janney Montgomery Scali, Inc, which IS registered With the SEC os on onvestment adVisor, may gIVe odvlce to liS mvestment adVISOry and athel customers Independently of ony stotements mode In thiS or In any other Issue Further Informotlon on ony secullty mentioned herein IS ovollable on request