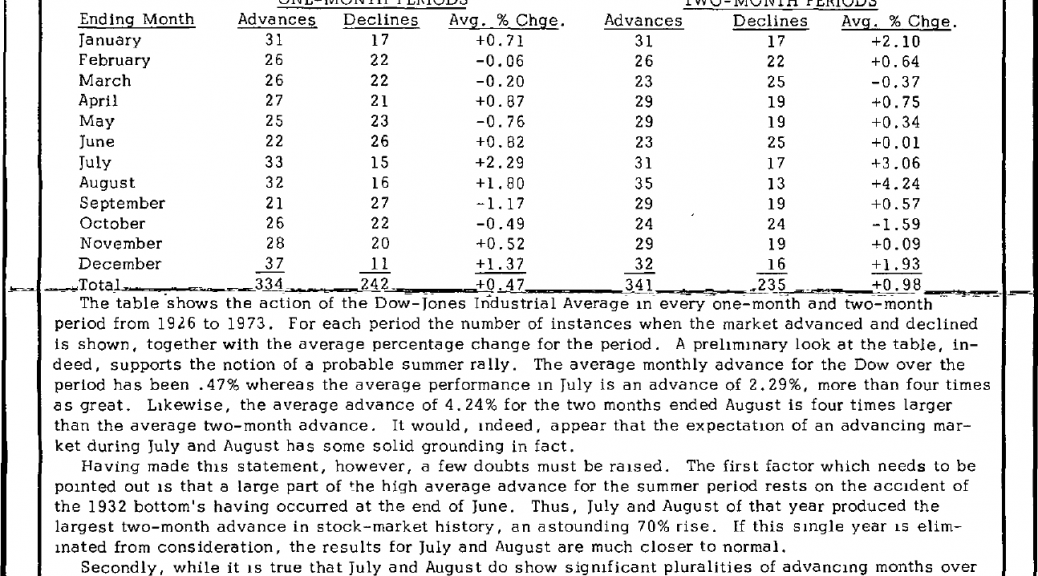 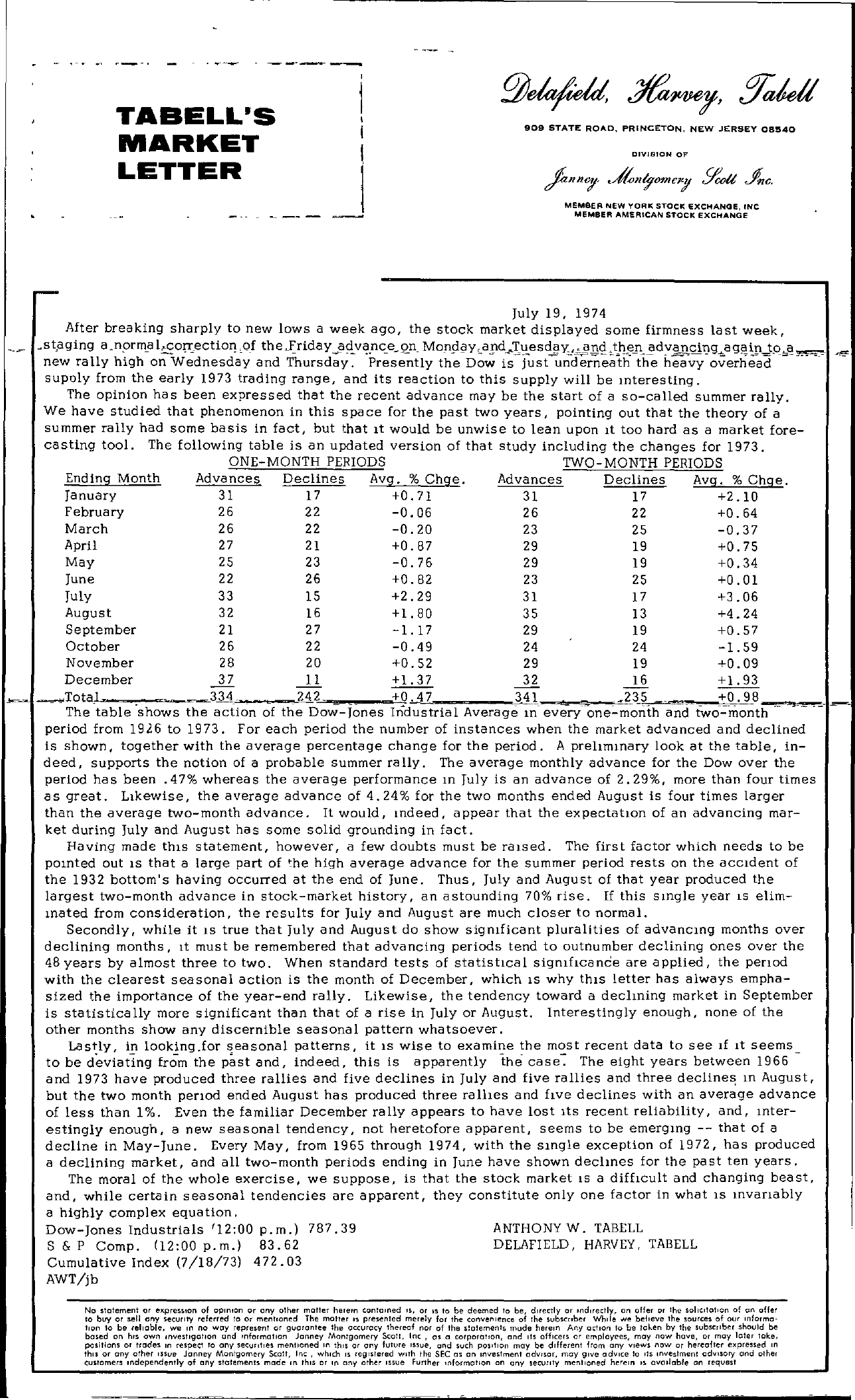 TABELL'S MARKET LETTER , ( \ \- – – – ………–…- 909 STATE ROA.D, PRINCETON. NEW JERSEY 08S40 DIVISION OF MEMBER NEW YORK STOCK EXCHANoe, INC MEMBER AMERICAN STOCK eXCHANGE July 19, 1974 After breaking sharply to new lows a week ago, the stock market displayed some firmness last week, staging a normal,.,,o!lectiol! ,of the,Fridayadv.nc.e.Q.n MonpilY caJ1d1uesdgY;!J;lcU,hen.dvancjTlg,ag!1J.o new rally high on Wednesday and Thursday. Presently the Dow is just underneath the heavy overhead . supoly from the early 1973 trading range, and its reaction to this supply will be mteresting. The opinion has been expressed that the recent advance may be the start of a so-called summer rally. We have studied that phenomenon in this space for the past two years, pointing out that the theory of a summer rally had some basis in fact, but that It would be unwise to lean upon It too hard as a market fore- casting tooL The following table is an updated version of that study including the changes for 1973. ONE-MONTH PERIODS TWO-MONTH PERIODS Ending Month Advances Declines Avg. Chge. Advances Declines Avg. Chge. January 31 17 0.71 31 17 2.10 February 26 22 -0.06 26 22 0.64 March 26 22 -0.20 23 25 -0.37 April 27 21 0.87 29 19 0.75 May 25 23 -0.76 29 19 0.34 June 22 26 0.82 23 25 0.01 July 33 15 2.29 31 17 3.06 August 32 16 1.80 35 13 4.24 September 21 27 -I. 17 29 19 0.57 October 26 22 -0.49 24 24 -1.59 November 28 20 0.52 29 19 0.09 December 37 II 1.37 32 16 1.93 Total . 334. 242 9.47 341 n' . 23.5 . 0..98 .. The table shows the action of the Dow- Jones Industrial Average m everyone-month and two-month period from 1926 to 1973. For each period the number of instances when the market advanced and declined is shown, together with the average percentage change for the period. A prehmmary look at the table, in- deed, supports the notion of a probable summer ra lly. The average monthly advance for the Dow over the period has been .47 whereas the average performance m July is an advance of 2.29, more than four times as great. LIkewise, the average advance of 4.24 for the two months ended August is four times larger than the average two-month advance. It would, mdeed, appear that the expectatIOn of an advancing mar- ket during July and August has some solid grounding in fact. laving made th,S statement, however, a few doubts must be raIsed. The first factor which needs to be pomted out IS that a large part of 'he high average advance for the summer period rests on the aCCIdent of the 1932 bottom's having occurred at the end of June. Thus, July and August of that year produced the largest two-month advance in stock-market history, an astounding 70 rise. If this smgle year IS elim- mated from consideration, the results for July and August are much closer to normaL Secondly, while it IS true that July and August do show sigmficant pluralities of advancmg months over declining months, 1t must be remembered that advancing periods tend to outnumber declining ones over the 48 years by almost three to two. When standard tests of statist1cal sigmfIcance are applied, the penod with the clearest seasonal action is the month of December, which 1S why th,S letter has always empha- sized the importance of the year-end rally. Likewise, the tendency toward a declming market in September is statistically more significant than that of a rise in July or August. Interestingly enough, none of the other months show any discernible seasonal pattern whatsoever. Lastly, in lookingJor seasonal patterns, it IS wise to examine the most recent data to see If It seems to be deviating from the pst and, indeed, this is apparently the case The eight years between 1966 and 1973 have produced three rallies and five declines in July and five rallies and three decline m August, but the two month penod ended August has produced three ralhes and fIve declines with an average advance of less than 1. Even the familiar December rally appears to have lost ItS recent reliability, and, mter- estingly enough, a new seasonal tendency, not heretofore apparent, seems to be emergmg — that of a decline in May-June. Every May, from 1965 through 1974, with the smgle exception of 1972, has produced a declining market, and all two-month periods ending in June have shown declmes for the past ten years. The moral of the whole exercise, we suppose, is that the stock market IS a difficult and changing beast, and, while certain seasonal tendencies are apparent, they constitute only one factor in what IS mvanably a highly complex equation. Dow-Jones Industrials '1200 p.m.) 787.39 S & P Camp. (J200 p. m.) 83.62 ANTHONY W. TABELL DELAFIELD, HARVEY, TABELL Cumulative Index (7/18/73) 472.03 AWT/jb No stctement or expressIon of opinion or any other matter herein tonlClined IS, or ,s to be deemed to be, directly or Ind,rectly, on offer or Ihe sol,c,tot,on of on offer to bvy or sell any setullly referred to or menhoned The molter 1 presented merely for the COl'wef'lence of the subscrober While -He beheve Ihe sources of our Information to be reliable, we In no way represent or guarantee Ihe accuracy thereof nor of the sotements mode herein Any ac;tlan to be talen by the subSCTlber should be based on tliS own mveslllallan and mformatlon Janney Montgomery Scoll, Inc, as 0 corporat,on, and lis officers or employees, moy now have, or may iater lake, posillons or Irades In respec;t to any securities mentioned In thiS or any future Issue, and such position may be different from any views now or hereafter expressed In th or ony other Issue Janney Montgomery Scali, Inc, which IS registered WITh Ihe SEC as on investment adVISor, may give adVice to Its Investment adVISOry and othel customers mdependently of any stotements made m thiS or In any other Issue Further ,nformatlon on any security mentioned herem 1 available on request