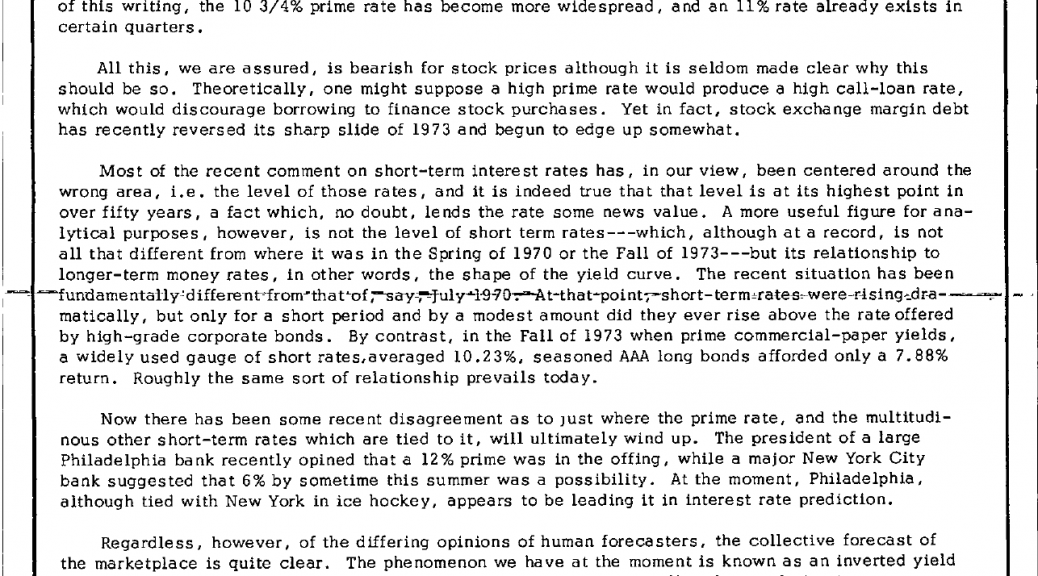 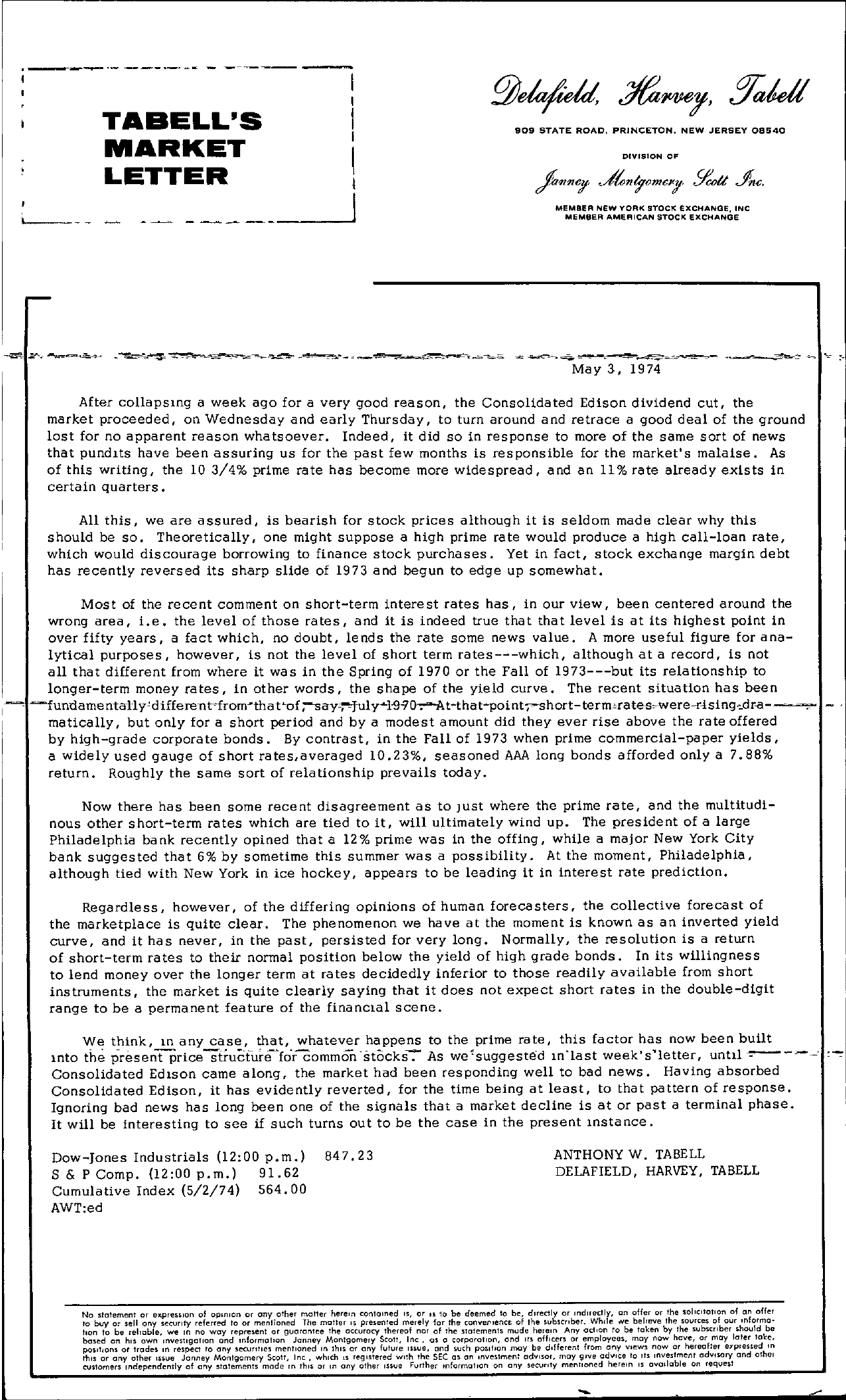 .———- – ——- I TABELL'S I MARKET LETTER I I 1 —-'1 909 STATE ROAD, PRINCETON, NEW JERSEY 08540 DIVISION OF MEMBER NEW YORK STOCK EXCHANGE, INC MEMBER AMERICAN STOCK eXCHANGE May 3, 1974 After collapsIng a week ago for a very good reason, the Consolidated Edison dividend cut, the market proceeded, on Wednesday and early Thursday, to turn around and retrace a good deal of the ground lost for no apparent reason whatsoever. Indeed, it did so in response to more of the same sort of news that pundlls have been assuring us for the past few months is responsible for the market's malaise. As of this writing, the 10 3/4 prime rate has become more widespread, and an 11 rate already exists in certain quarters. All this, we are assured, is bearish for stock prices although it is seldom made clear why this should be so. Theoretically, one might suppose a high prime rate would produce a high call-loan rate, which would discourage borrowing to finance stock purchases. Yet in fact, stock exchange margin debt has recently reversed its sharp slide of 1973 and begun to edge up somewhat. Most of the recent comment on short-term interest rates has, in our view, been centered around the wrong area, i.e. the level of those rates, and it is indeed true that that level is at its highest point in over fifty years, a fact which, no doubt, lends the rate some news value. A more useful figure for analytical purposes, however, is not the level of short term rates—which, although at a record, is not all that different from where it was in the Spring of 1970 or the Fall of 1973—but its relationship to longer-term money rates, in other words, the shape of the yield curve. The recent situation has been ,- fundame ntatl y d ifferent-from'tha t'of ;-sayc;-luly19-70'-'\ t-thatpoi nt,short- te rmorates7were-r4 si ngdra – –,-1 matically, but only for a short period and by a modest amount did they ever rise above the rate offered by high-grade corporate bonds. By contrast, in the Fall of 1973 when prime commerCial-paper yields, a widely used gauge of short rates,averaged 10.23, seasoned AAA long bonds afforded only a 7.88 return. Roughly the same sort of relationship prevails today. Now there has been some recent disagreement as to Just where the prime rate, and the multitudinous other short-term rates which are tied to it, will ultimately wind up. The president of a large Philadelphia ba nk recently opined that a 12 prime was in the offing, while a major New York City bank suggested that 6 by sometime this summer was a possibility. At the moment, Philadelphia, although tied with New York in ice hockey. appears to be leading it in interest rate prediction. Regardless, however, of the differing opinions of human forecasters, the collective forecast of the marketplace is quite clear. The phenomenon we have at the moment is known as an inverted yield curve, and it has never, in the past, persisted for very long. Normally, the resolution is a return of short-term rates to their normal position below the yield of high grade bonds. In its willingness to lend money over the longer term at rates decidedly inferior to those readily available from short instruments, the market is quite clearly saying that it does not expect short rates in the double-digit range to be a permanent feature of the finanCIal scene. –IInto We the think, lA any case, that, whatever happens present pricestrucfureforcommoostocks– to As the we prime rate, 'suggested this factor has now lA'last week's'letter, beuennlllbui-lt–' Consolidated EdIson came along, the market had been responding well to bad news. Having absorbed Consolidated Edison, it has evidently reverted, for the time being at least, to that pattern of response. Ignoring bad news has long been one of the signals that a market decline is at or past a terminal phase. It will be interesting to see if such turns out to be the case in the present Instance. Dow-Jones Industrials (1200 p.m.) S & P Compo (1200 p.m.) 91.62 Cumulative Index (5/2/74) 564.00 AWTed 847.23 ANTHONY W. TABELL DELAFIELD, HARVEY, TABELL No statement or e)(preSSlon of opinion or any other matter herein contained IS, or IS 10 be deemed to be, directly or indirectly, on offer or Ihe sollCltoTlon of an offer to buy or sell any seCUrity referred to or mentioned The mailer IS presented merely for Ihe convel'ence of the subSCriber. While -lie believe the sources of our mformo han to be rellable, we In no way represent or guarantee the accuracy thereof nor of the statements mude herem Any action to be taken by the subscriber should be based on hiS own Investigation ond mformallon Janney Montgomery Scoll, Inc. 0 a corporation, and Its officers or employees, may now have, or may later toke, poSitions or trades In respect to any secUrities mentioned In Ihls or any future ISUe, and such pOSition may be different from any views now or hereafter el'pressed In thiS or any other Issue Janney Montgomery Scali, Inc, which IS registered With the SEC as an Investment adVisor, may gIVe adVice to Its Investment advlwry and othel customers Independently of any statements made rn thiS or In any other Issue Further mformatlon on any security mentioned herem IS available on request