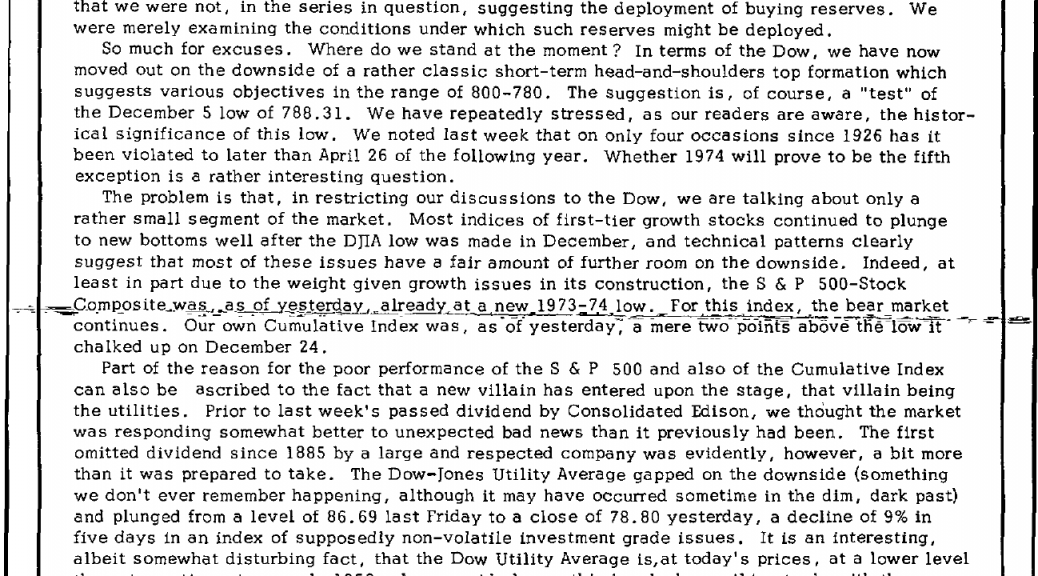 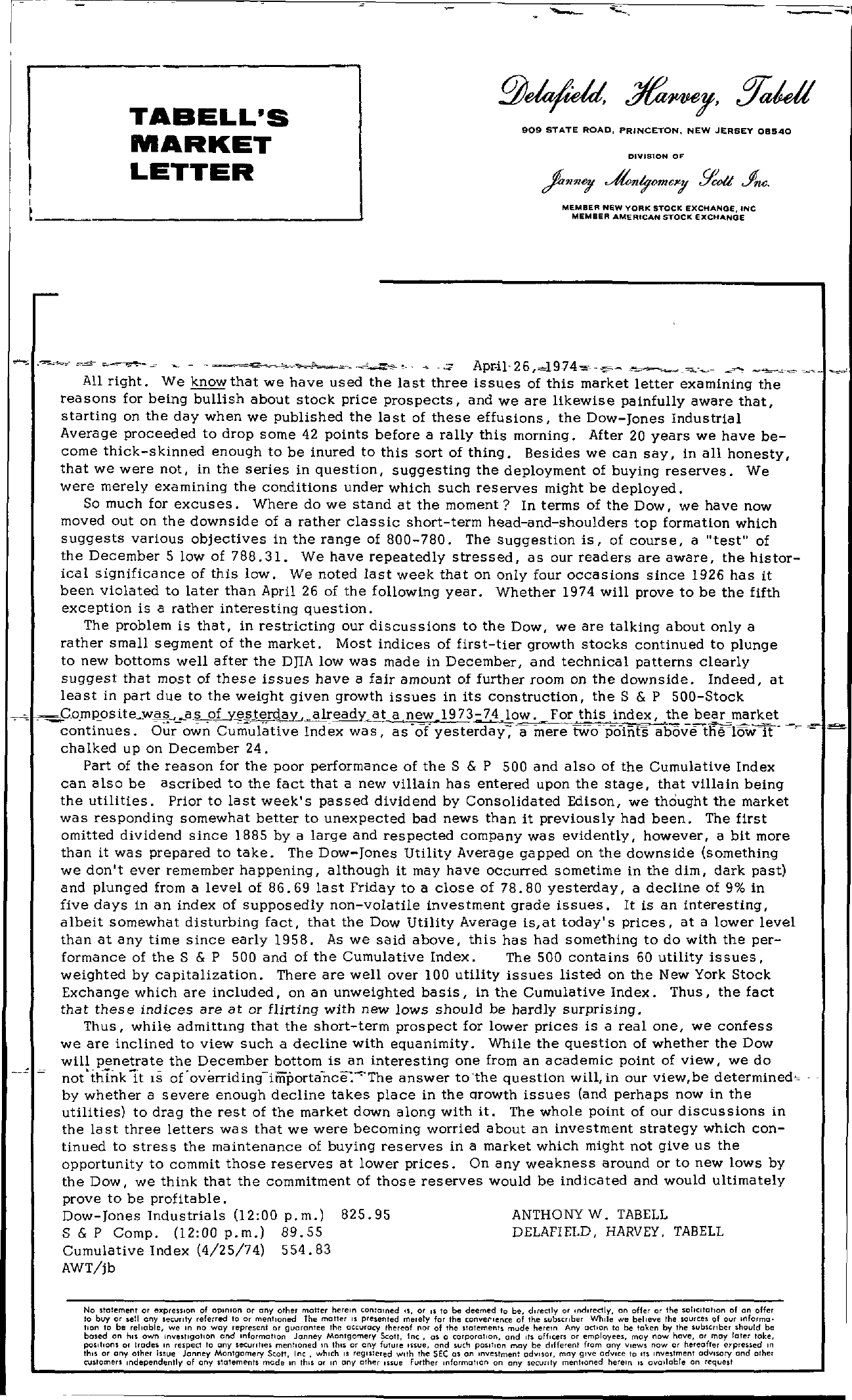 1- TABELL-S MARKET LETTER — 909 STATE ROAD, PRINCETON, NEW JERSEY 08540 DIVISION OF MEMBER New YORK STOCK EXCHANGE, INC MEMBER AMERICAN STOCI( EXCHANGE .-.' – ,,–,',- 'd '' . Apr,il'26,1974,.–w- – All right. We know that we have used the last three issues of this market letter examining the reasons for being bullish about stock price prospects, and we are likewise painfully aware that, starting on the day when we published the last of these effusions, the Dow-Jones Industrial Average proceeded to drop some 42 points before a rally this morning. After 20 years we have be- come thick-skinned enough to be inured to this sort of thing. Besides we can say, in all honesty, that we were not, in the series in question, suggesting the deployment of buying reserves. We were merely examining the conditions under which such reserves might be deployed. So much for excuses. Where do we stand at the moment In terms of the Dow, we have now moved out on the downside of a rather classic short-term head-and-shoulders top formation which suggests various objectives in the range of 800-780. The suggestion is, of course, a test of the December 5 low of 788.31. We have repeatedly stressed, as our readers are aware, the histor- ical significance of this low. We noted last week that on only four occasions since 1926 has it been violated to later than April 26 of the following year. Whether 1974 will prove to be the fifth exception is a rather interesting question. The problem is that, in restricting our discussions to the Dow, we are talking about only a rather small segment of the market. Most indices of first-tier growth stocks continued to plunge to new bottoms well after the DJIA low was made in December, and technical patterns clearly suggest that most of these issues have a fair amount of further room on the downside. Indeed, at least in part due to the weight given growth issues in its construction, the S & P SOO-Stock Gompositewa,a oi..Yg.tElrkY, already at a new 1973-74 low. For this index, ,the bearmart continues. Our own Cumulative Index was, as 'of yesterday 'a mere tWo'points ab6vetfi'e -low….it' – … chalked up on December 24. Part of the reason for the poor performance of the S & P 500 and also of the Cumulative Index can also be ascribed to the fact that a new villain has entered upon the stage, that villain being the utilities. Prior to last week's passed dividend by Consolidated Edison, we thought the market was responding somewhat better to unexpected bad news than it previously had been. The first omitted dividend since 1885 by a large and respected company was evidently, however, a bit more than it was prepared to take. The Dow-Jones Utility Average gapped on the downSide (something we don't ever remember happening, although it may have occurred sometime in the dim, dark past) and plunged from a level of 86.69 last Friday to a close of 78.80 yesterday, a decline of 9 in five days in an index of supposedly non-volatile investment grade issues. It is an interesting, albeit somewhat disturbing fact, that the Dow Utility Average is,at today's prices, at a lower level than at any time since early 1958. As we said above, this has had something to do with the per- formance of the S & P 500 and of the Cumulative Index. The 500 contains 60 utility issues, weighted by capitalization. There are well over 100 utility issues listed on the New York Stock Exchange which are included, on an unweighted basis, in the Cumulative Index. Thus, the fact that these indices are at or flirting with new lows should be hardly surprising. Thus, while admittmg that the short-term prospect for lower prices is a real one, we confess we are inclined to view such a decline with equanimity. While the question of whether the Dow will penetrate the December bottom is an interesting one from an academic point of view, we do not'tlililklt 15 o(overriding-importa-nce–The answer tothe question will,in our view,be determined by whether a severe enough decline takes place in the qrowth issues (and perhaps now in the utilities) to drag the rest of the market down along with it. The whole pOint of our discussions in the last three letters was that we were becoming worried about an investment strategy which con- tinued to stress the maintenance of buying reserves in a market which might not give us the opportunity to commit those reserves at lower prices. On any weakness around or to new lows by the Dow, we think that the commitment of those reserves would be indicated and would ultimately prove to be profitable. Dow-Jones Industrials (1200 p.m.) 825.95 ANTHONY W. TABELL S & P Compo (1200 p.m.) 89.55 DELAFIELD, HARVEY. TABELL Cumulative Index (4/25/74) 554.83 AWT/jb No stotement Qf expreSSion of OpinIon or ony other motter herein contaIned '5, or 1 to be deemed 10 be, dIrectly or 'ndlrectly. on offer or the OIICIIOl1on of on offer to buy or sell any security referred to or menhoned The mOiler IS presented merely for the converlence of the subscriber 'WhIle we believe the sources of our InfOrmolion TO be reliable, we ,n no way represent or guarantee The accuracy thereof nor of the lIatements mude herem Any ocllon To be token by The SubSCriber should be based on hiS own InveSTigaTion and information Janney Montgomery Seoll, Inc, as a corporaTion, and ITs officers or employees, may now have, or may laTer toke, posITIOns or trades In respect to any secUrities mentIOned 10 thiS or any future Issue, and such POSition may be different from ony Views now or hereafTer erpressed In thIS or any other Inue Janney Montgomery SCaN, Inc, which IS regisTered WITh the SEC as on investmenT adVisor, may give adVice to Its Investment adVISOry and olher customers Independently of any statements mode In thIS or In any other luue Further information on any security mentIOned herein IS available on request