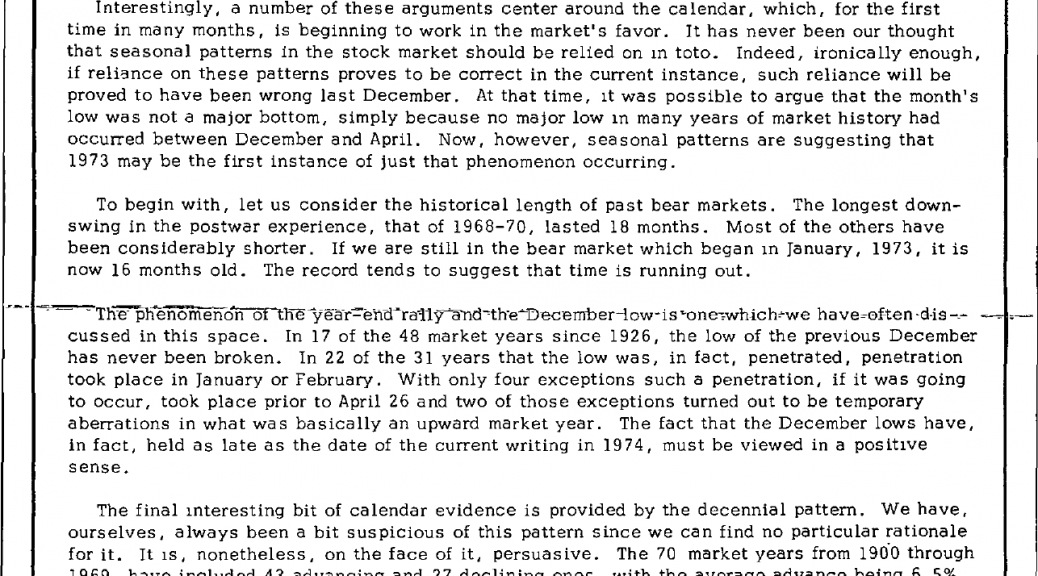 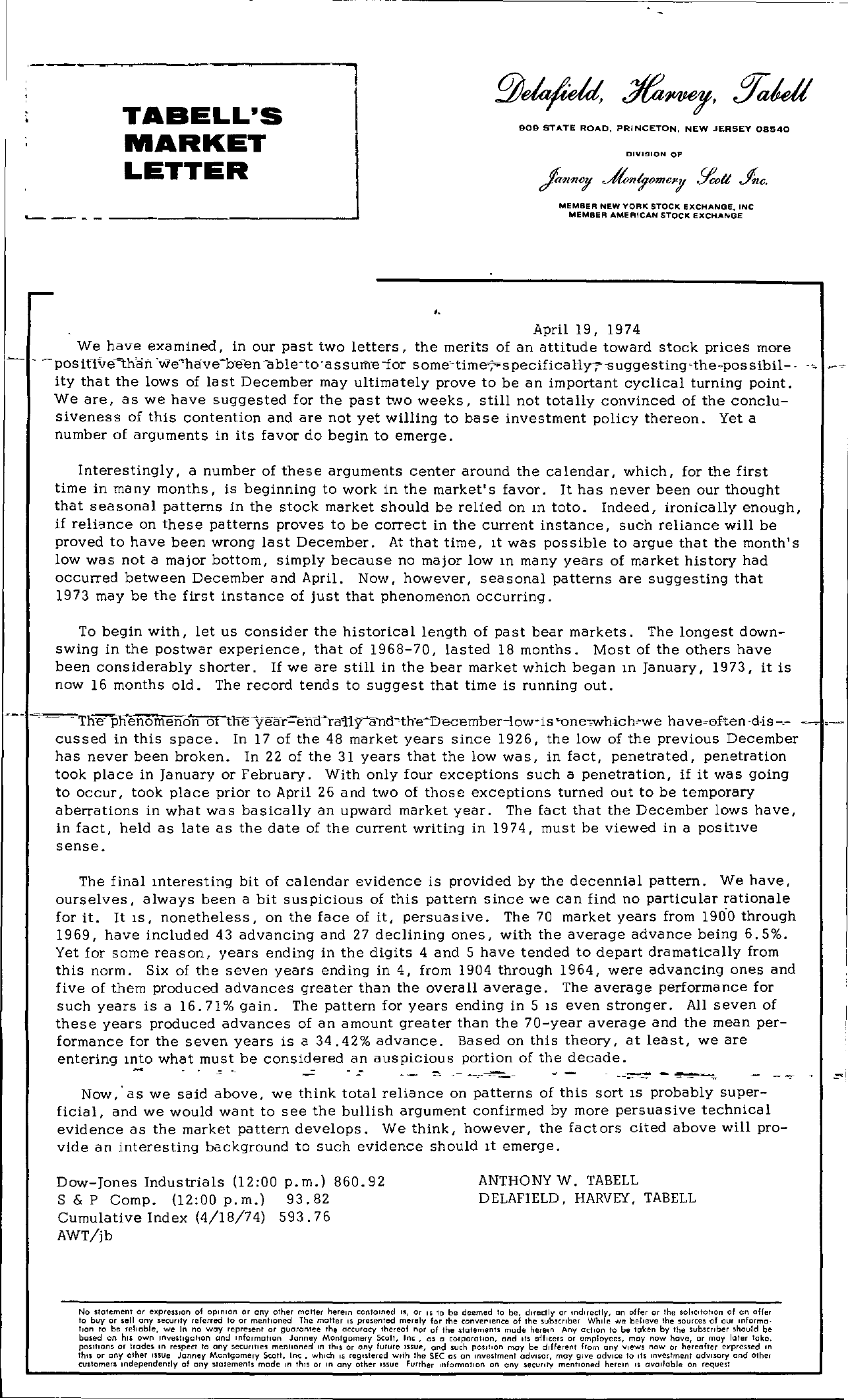 TABELL-S MARKET LETTER L – – , 909 STATE ROAD, PRINCETON, NEW .JERSEY 08540 DIVISION OF MEMBER NEW YORK STOCI( eXCHANGE, INC MEMBER AMERICAN STOCK EXCHANGE .. April 19, 1974 We have examined, in our past two letters, the merits of an attitude toward stock prices more , -posinvehall 'we-have-b'een 'able'to'assurrre-for sometime';-specificaHy;–suggesting,thepossibil-, – ity that the lows of last December may ultimately prove to be an important cyclical turning point. We are, as we have suggested for the past two weeks, still not totally convinced of the conclusiveness of this contention and are not yet willing to base investment policy thereon. Yet a number of arguments in its favor do begin to emerge. Interestingly, a number of these arguments center around the calendar, which, for the first time in many months, is beginning to work in the market's favor. It has never been our thought that seasonal patterns in the stock market should be relied on m toto. Indeed, ironically enough, if reliance on these patterns proves to be correct in the current instance, such reliance will be proved to have been wrong last December. At that time, It was possible to argue that the month's low was not a major bottom, simply because no major low m many years of market history had occurred between December and April. Now, however, seasonal patterns are suggesting that 1973 may be the first instance of just that phenomenon occurring. To begin with, let us consider the historical length of past bear markets. The longest downswing in the postwar experience, that of 1968-70, lasted 18 months. Most of the others have been considerably shorter. If we are still in the bear market which began m January, 1973, it is now 16 months old. The record tends to suggest that time is running out. , – Tn'e' pnenomenon oftfieyei,fterl(rrally,mdth'eDecemberlow-is 'one-;wh,ich'we haveoof-ten ,(lis-,cussed in this space. In 17 of the 48 market years since 1926, the low of the previous December has never been broken. In 22 of the 31 years that the low was, in fact, penetrated, penetration took place in January or February. With only four exceptions such a penetration, if it was going to occur, took place prior to April 26 and two of those exceptions turned out to be temporary aberrations in what was basically an upward market year. The fact that the December lows have, in fact, held as late as the date of the current writing in 1974, must be viewed in a positive sense. The final mteresting bit of calendar evidence is provided by the decennial pattern. We have, ourselves, always been a bit suspicious of this pattern since we can find no particular rationale for it. It IS, nonetheless, on the face of it, persuasive. The 70 market years from 190'0 through 1969, have included 43 advancing and 27 declining ones, with the average advance being 6.5. Yet for some reason, years ending in the digits 4 and 5 have tended to depart dramatically from this norm. Six of the seven years ending in 4, from 1904 through 1964, were advancing ones and five of them produced advances greater than the overall average. The average performance for such years is a 16.71 gain. The pattern for years ending in 5 IS even stronger. All seven of these years produced advances of an amount greater than the 70-year average and the mean performance for the seven years is a 34.42 advance. Based on this theory, at least, we are entering mto what must be conSidered an auspicious portion of the decade. Now,' as we said above, we think total reliance on patterns of this sort IS probably super ficial, and we would want to see the bullish argument confirmed by more persuasive technical evidence as the market pattern develops. We think, however, the factors cited above will provide an interesting background to such evidence should It emerge. i Dow-Jones Industrials (1200 p.m.) 860.92 S&P Compo (l200p.m.) 93.82 Cumulative Index (4/18/74) 593.76 AWT/jb ANTHONY W. TABELL DELAFIELD. HARVEY. TABELL No statement or eprCS510n of opInion or any other mOiler herein contolned IS, or 1510 be deemed 10 be, directly or tndlrectly, on offer or the sollc,totlon of on oHm to buy or sell ony security referred to or mentioned The moiler IS presented merely for the conllel'lence of the subscriber While we believe the sources of our mforma tlon to be reliable, we In no way represent or guarantee the accuracy ihereof nor of ihe siatements mude herein Any action to be taken by the subSCriber should be based on hiS own Investlgotlon and Information Jonney Montgomery Scoll, Inc, 0 a corporatIOn, and lIs officers or employees, may now have, or may loter toke, pOSlhons or trades In respect to any securities mentioned In Ih,s or any future ,ssue, and such pOSition may be different from any views now or hereafter e…pressed In thl or any other Issue Jonney Montgomery Scoll, Inc, whl;h IS registered with the SEC as on Investment adVisor, moy give adVice to liS Investment adVISOry and oth(!1 customers Independently of any statements mode In thiS 01 In any other ISsue Further Informollon on any seo;urlty mentioned herem IS aVailable on request