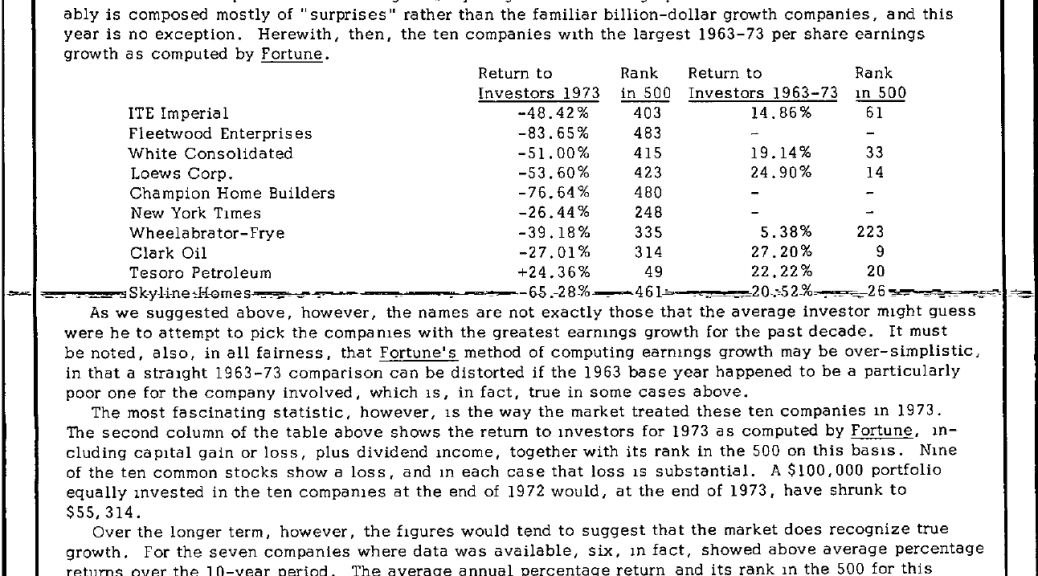 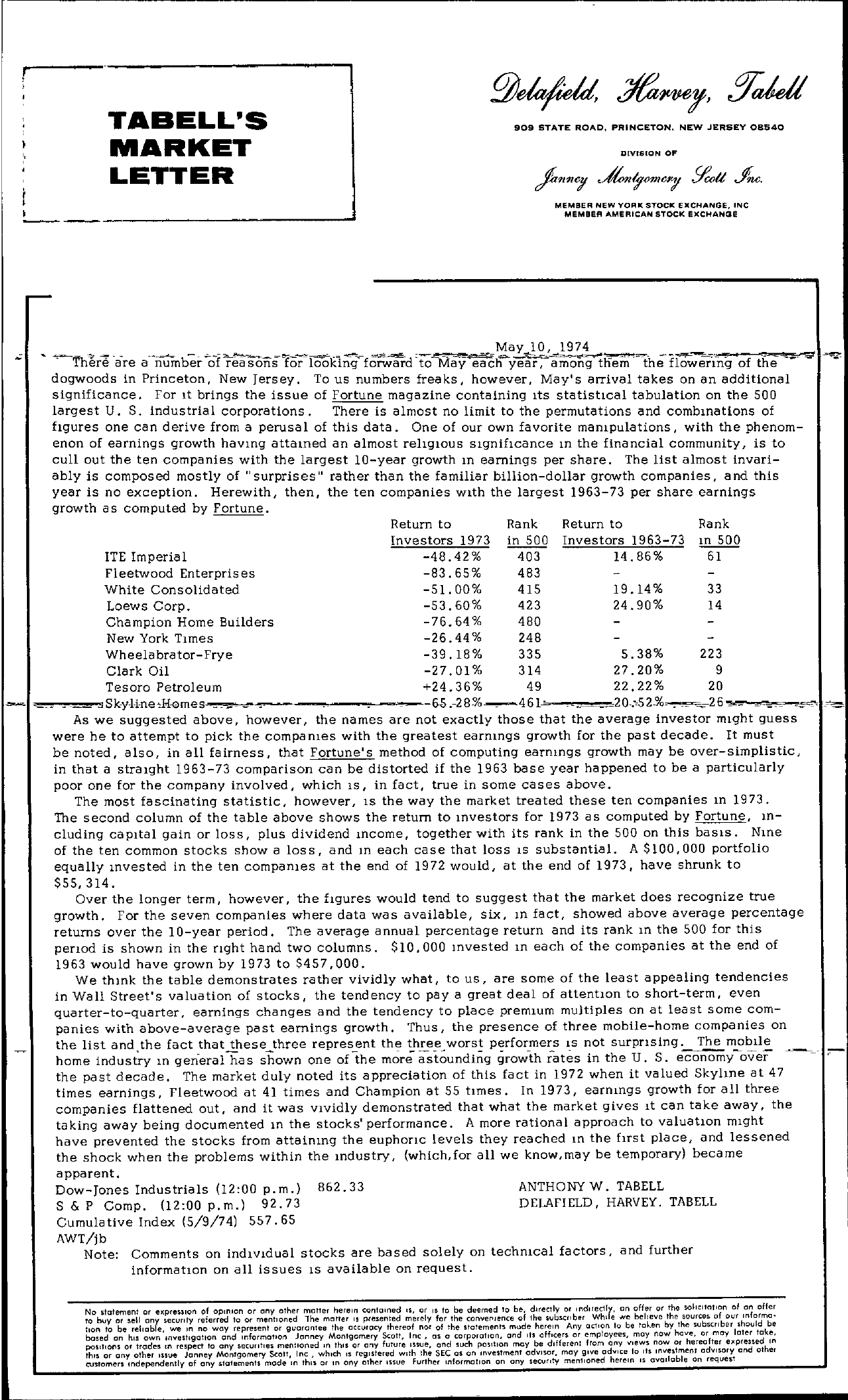 ,I TABELL'S MARKET LETTER 909 STATE ROAD, PRINCETON. NEW JERSEY 08540 DIVISION OF MEMBER NEW YORK STOCK EXCHANGE, INC MEMBER AMERICAN STOCK EXCHANGE . May 10, 1974 – .-Thre -a-re a–number o-fr sons1or-looti;g–f;rd to–Maychye a'mong'tliem '-thefwering of the — dogwoods in Princeton, New Jersey. To us numbers freaks, however, May's arrival takes on an additional significance. For It brings the issue of Fortune magazine containing ItS statistICal tabulation on the 500 largest U. S. industrial corporations. There is almost no limit to the permutations and combinations of lIgures one can derive from a perusal of this data. One of our own favorite mampulations, with the phenom- enon of earnings growth havmg attamed an almost rellgIOus SIgnifIcance m the financial community, is to cull out the ten companies with the largest 10-year growth In earnings per share. The list almost invari- ably is composed mostly of surprises rather than the familiar billion-dollar growth companies, and this year is no exception. Herewith, then, the ten companies WIth the largest 1963-73 per share earnings growth as computed by Fortune. Return to Rank Return to Rank Investors 1973 in 500 Investors 1963-73 In 500 ITE Imperial -48.42 403 14.86 61 Fleetwood Enterpris es -83.65 483 White Consolidated -51. 00 415 19.14 33 Loews Corp. -53.60 423 24.90 14 Champion Home Builders -76.64 480 New York TImes -26.44 248 Wheelabrator-Frye Clark Oil Tesoro Petroleum Sk-y-l-i-ne-H-omes -39.18 335 -27.01 314 24.36 49 -6-.5.-28-.—461- 5.38 223 27.20 9 22.22 20 20-52–. -..-26 – – As we suggested above, however, the names are not exactly those that the average investor mIght guess were he to attempt to pick the compames with the greatest earmngs growth for the past decade. It must be noted, also, in all fairness, that Fortune's method of computing earmngs growth may be over-simplistic, in that a straIght 1963-73 comparison can be distorted if the 1963 base year happened to be a particularly poor one for the company involved. which IS I in fact, true in some cases above. The most fascinating statistic, however, IS the way the market treated these ten companies m 1973. The second column of the table above shows the return to mvestors for 1973 as computed by Fortune, m- eluding capItal gain or loss, plus dividend mcome, together with its rank in the 500 on this baSIS. Nme of the ten common stocks show a loss, and In each case that loss IS substantial. A 100,000 portfolio equally mvested in the ten compames at the end of 1972 would, at the end of 1973, have shrunk to 55,314 . Over the longer term, however, the lIgures would tend to suggest that the market does recognize true growth. For the seven companies where data was available, six, In fact, showed above average percentage returns over the 10-year period. The average annual percentage return and its rank m the 500 for this perIod is shown in the rIght hand two columns. 10,000 mvested m each of the companies at the end of 1963 would have grown by 1973 to 457,000. We thmk the table demonstrates rather vividly what, to us, are some of the least appealing tendencies in Wall Street's valuation of stocks, the tendency to pay a great deal of attentIOn to short-term, even quarter-to-quarter, earnings changes and the tendency to place premIum multiples on at least some com- panies with above-average past earnings growth. Thus I the presence of three mobile-home companies on the list and the fact that these three represent the three worst performers IS not surprIsing. The mobIle home industy In gen-eralhas shown one of the more astounding grow-th rates in the U. S. economy-over —– the past decade. The market duly noted its appreciation of this fact in 1972 when it valued Skylme at 47 times earnings, Fleetwood at 41 times and Champion at 55 lImes. In 1973, earnmgs growth for all three companies flattened out, and it was VIvidly demonstrated that what the market gives It can take away, the taking away being documented In the stocks' performance. A more rational approach to valuation rmght have prevented the stocks from attainmg the euphOrIC levels they reached In the lIrst place, and lessened the shock when the problems within the mdustry, (which,for all we know,may be temporary) became apparent. Dow-Jones Industrials (200 p.m.) 862.33 S&PComp. (200p.m.) 92.73 ANTHONY W. TABELL DELAFIELD, HARVEY. TABELL Cumulative Index (5/9/74) 557.65 AWT/jb Note Comments on indIVIdual stocks are based solely on techmcal factors, and further informatIon on all issues IS available on request. No statement 10 buy or sell or expression of opInion or any other any security referred to or mentioned motler herein lhe motter IS contained presented '5, or IS to be metely for the cdoenevmee'JdI1n0CEboef, directly or mdlleclly, the subsCtlber While on we offer or the soliCitation of believe the sources of our on offer Informa- 110n to be reliable, we In no way represent or guatantee the occl,Irocy thereof nor of the statements mode herein Any Oellon to be tolen by the subscriber should be based on hiS own pos,tlons or trades Inveshgollon and Informallon Janney Montgomery In respect to ony seCUrities mentioned 10 thiS or any Scott, future Inc, as a Issue, and csourcphorpaOtilotnl,onanmdoyItsbeoffdicifefersreonrt employees, moy from any views now now have, or may later lake, or hereafter elCpressed In thIS or any other Iue Janney Montgomery Scali, Inc, which IS registered With the SEC 05 on Investment adVisor, may g,ve adVice to lIs IIwestmenl adVisory ond olhel customers mdependently of ony slo/ements made 10 Ih,s or 10 any olher ,Sl,Ie Further Informollon on any secutlty menlloned herein 1 aVailable on request