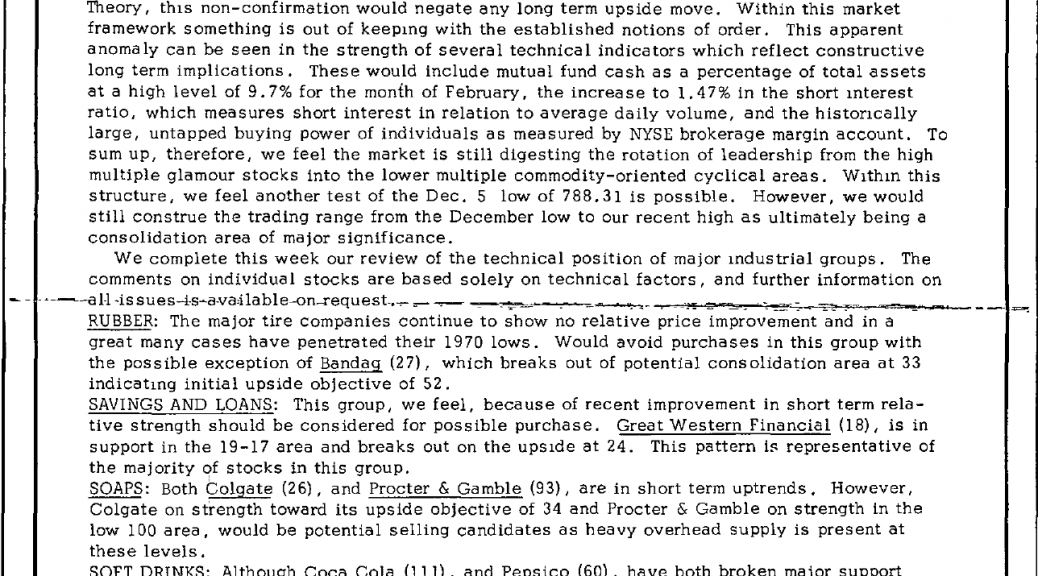 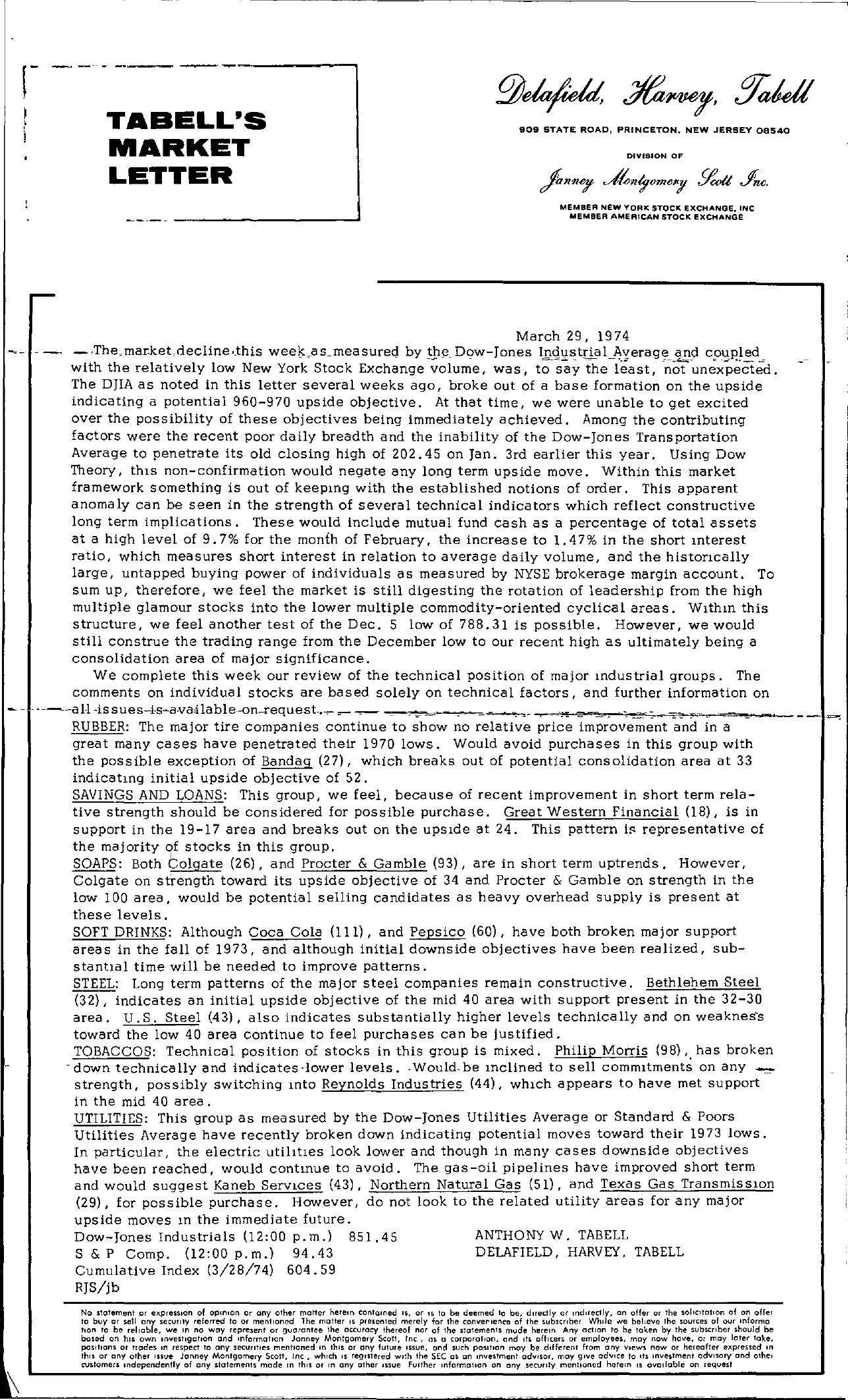 -. – – —- ———, TABELL'S MARKET LETTER –,– ——–' 909 STATE ROAD, PRINCETON. NEW JERSEY 08540 DIVISION OF MEMBER NEW YORK STOCK EXCHANGE,INC MEMBER AMERICAN STOCK eXCHANGE March 29, 1974 — – – – .Themar,ketdecline,.this weeLasmeasured by tlw Dow-Jones I!gustrialAerage gn(l cDuJlled with the relatively low New York Stock Exchange volume, was, tosay the least,not-une,;pect;d. The DJIA as noted in this letter several weeks ago, broke out of a base formation on the upside indicating a potential 960-970 upside objective. At that time, we were unable to get excited over the possibility of these objectives being immediately achieved. Among the contributing factors were the recent poor daily breadth and the inability of the Dow-Jones Transportation Average to penetrate its old closing high of 202.45 on Jan. 3rd earlier this year. Using Dow Theory, thIS non-confirmation would negate any long term upside move. Within this market framework something is out of keepmg with the established notions of order. This apparent anomaly can be seen in the strength of several technical indicators which reflect constructive long term implications. These would include mutual fund cash as a percentage of total assets at a high level of 9.7 for the month of February, the increase to 1.47 in the short mterest ratio, which measures short interest in relation to average daily volume, and the historically large, untapped buying power of individuals as measured by NYSE brokerage margin account. To sum up, therefore, we feel the market is still digesting the rotation of leadership from the high multiple glamour stocks into the lower multiple commodity-oriented cyclical areas. Withm this structure, we feel another test of the Dec. 5 low of 788.31 is possible. However, we would still construe the trading range from the December low to our recent high as ultimately being a consolidation area of major significance. We complete this week our review of the technical position of major mdustrial groups. The comments on individual stocks are based solely on technical factors, and further information on – – —aU-issues-i,s-avanable-on-request,. – , – –,…,…. ,,. u , – – RUBBER The major tire companies continue to show no relative price improvement and in a great many cases have penetrated their 1970 lows. Would avoid purchases in this group with the possible exception of Bandag (27), which breaks out of potential consolidation area at 33 indicatmg initial upside objective of 52. SAVINGS AND LOANS This group, we feel, because of recent improvement in short term rela- tive strength should be considered for possible purchase. Great Western Financial (18), is in support in the 19-17 area and breaks out on the upsIde at 24. This pattern ig representative of the majority of stocks in this group. SOAPS Both Colgate (26), and Procter & Gamble (93), are in short term uptrends. However, Colgate on strength toward its upside objective of 34 and Procter & Gamble on strength in the low 100 area, would be potential selling candidates as heavy overhead supply is present at these levels. SOFT DRINKS Although Coca Cola (111), and Pepsico (60), have both broken major support areas in the fall of 1973, and although initial downside objectives have been realized, sub- stanhal time will be needed to improve patterns. STEEL Long term patterns of the major steel companies remain constructive. Bethlehem Steel (32), indicates an initial upside objective of the mid 40 area with support present in the 32-30 area. U. S. Steel (43), also indicates substantially higher levels technically and on weaknes-s toward the low 40 area continue to feel purchases can be justified. TOBACCOS Technical position of stocks in this group is mixed. Philip Morris (98) '. has broken -down technically and indicates ,lower -levels. -Would,be mclined to sell commItments on any strength, possibly switching mto Reynolds Industries (44), WhICh appears to have met support in the mid 40 area. UTILITIES This group as measured by the Dow-Jones Utilities Average or Standard & Poors Utilities Average have recently broken down indicating potential moves toward their 1973 lows. In particular, the electric utillhes look lower and though in many cases downside objectives have been reached, would contmue to avoid. The gas-oil pipelines have improved short term and would suggest Kaneb ServlCes (43), Northern Natural Gas (51), and Texas Gas TransmisSlOn (29), for possible purchase. However, do not look to the related utility areas for any major upside moves m the immediate future. Dow-Jones Industrials (1200 p.m.) 851.45 ANTHONY W. TABELL S & P Compo (1200 p.m.) 94.43 DELAFIELD, HARVEY, TABELL Cumulative Index (3/28/74) 604.59 RJS/jb No slotement or expression of opinion or ony other mottcr herem contolned IS, or IS 10 be deemed 10 he, directly or indirectly, on offer or the SOllcltallon of on Qffer 10 buy or sell ony security referred 10 or mentioned The moiler IS presenled merely for the conver'lenco of the subSCriber While oNe belIeve the sources of our Informo lIOn to be relloble, we In no woy represent or guorantee the accuracy thereof nor of the statements mude herein Any action to be token by the subscnber should be based on hIS own investigation and Information Janney Montgomery Scoft, Inc, as a corporation, and Its officers or employees, may now have, or may 10 IeI' lake, posItions or trades In respect to any securities mentioned In Ihls or any future Issue, and such poslhon moy be different from any views now or hereafter e)(pressed In Ihls or any other Issue Janney Montgomery Scott, Inc, whtch IS registered With Ihe SEC as on Investment adVIsor, may give adVIce 10 lIs Inveslmenl adVISOry and othel cvstomen Independenlly of any stalemeflls made In thiS or In any other ISsue Further Informahon on any security mentIoned herein IS available on request —-