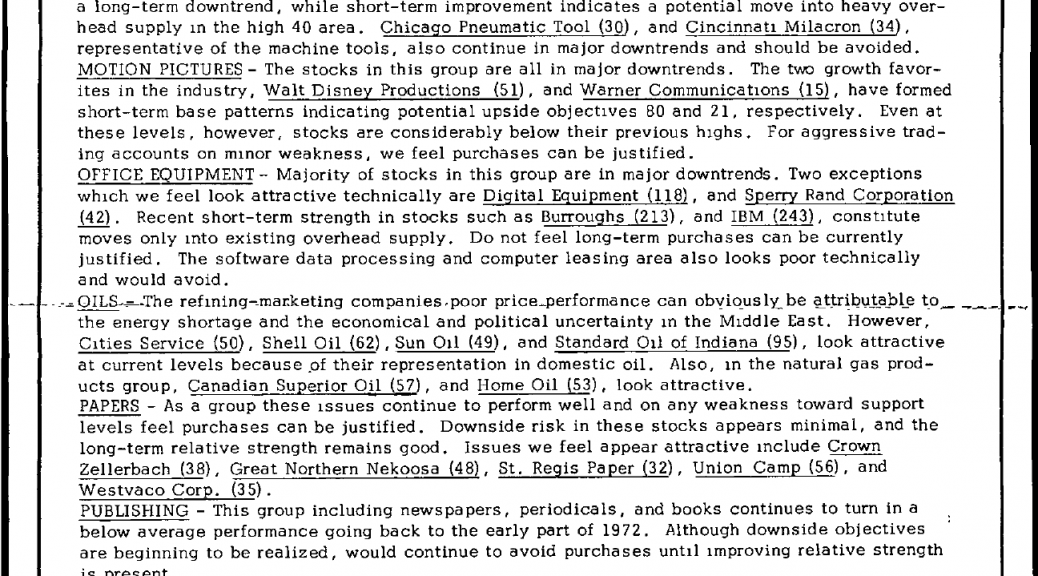 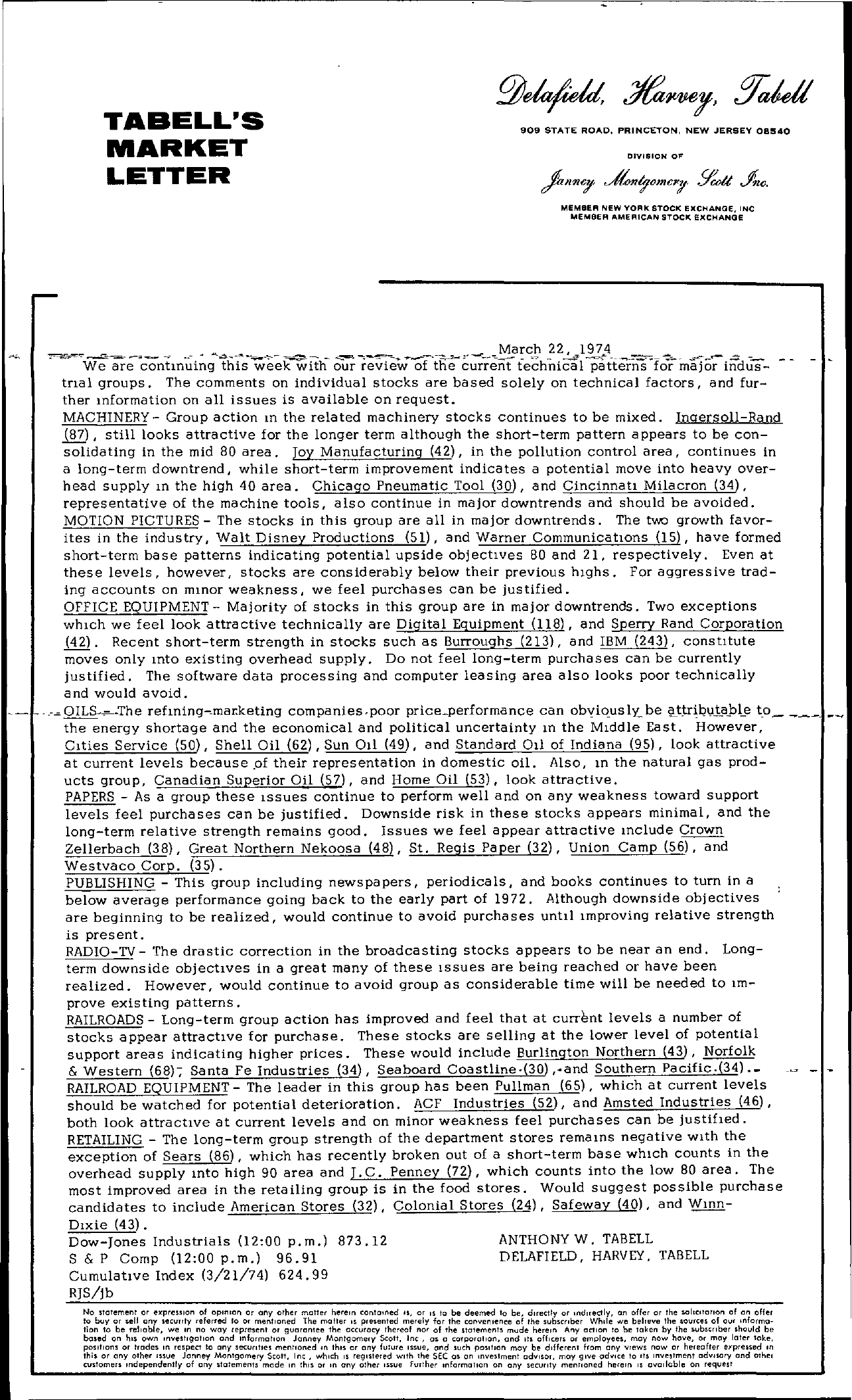 TABELL'S MARKET LETTER 909 STATE ROAD, PRINCETON, NEW JERSEY 08!i40 DIVISION OF MEMBER NEW YORK STOCI( EXCHANGE, INC MEMBER AMERICAN STOCK EXCHANGe March 22 1974- – – ; ; -……….. — ..- —-..-..;. -……..-.– – -.— … ,-…..-'— –.- ——…o.. We are contmuing this week with our review of the current technical patterns for major indus- tnal groups. The comments on individual stocks are based solely on technical factors, and fur- ther mformation on all issues is available on request. MACHINERY – Group action m the related machinery stocks continues to be mixed. Ingersoll-Rand (87), still looks attractive for the longer term although the short-term pattern appears to be con- solidating in the mid 80 area. Joy Manufacturing (42), in the pollution control area, continues in a long-term downtrend, while short-term improvement indicates a potential move into heavy over- head supply m the high 40 area. Chicago Pneumatic Tool (30), and Cincinnat1 Milacron (34), representative of the machine tools, also continue in major downtrends and should be avoided. MOTION PICTURES – The stocks in this group are all in major downtrends. The two growth favorites in the industry, Walt Disney Productions (51), and Warner CommunicatlOns (15), have formed short-term base patterns indicating potential upside objectlves 80 and 21, respectively. Even at these levels, however, stocks are considerably below their previous h1ghs. For aggressive trading accounts on mmor weakness, we feel purchases can be justified. OFFICE EQUIPMENT – Majority of stocks in this group are in major downtrends. Two exceptions wh1ch we feel look attractive technically are Digital Equipment (ll8) , and Sperry Rand Corporation (42). Recent short-term strength in stocks such as Burroughs (213), and IBM (243), constitute moves only mto existing overhead supply. Do not feel long-term purchases can be currently justified. The software data processing and computer leasing area also looks poor technically and would avoid. . OILS-.The rehning-.maIketing companies. poor priceperformance can obvious ly be ttriQutabte to the energy shortage and the economical and political uncertainty m the Middle East. However, C1ties Service (50), Shell Oil (62) , Sun 0,1 (49), and Standard 0,1 of Indiana (95), look attractive at current levels because .of their representation in domestic oil. Also, 10 the natural gas products group, Canadian Superior Oil (57), and Home Oil (53), look attractive. PAPERS – As a group these 1ssues continue to perform well and on any weakness toward support levels feel purchases can be justified. Downside risk in these stocks appears minimal, and the long-term relative strength remains good. Issues we feel appear attractive mclude Crown Zellerbach (38), Great Northern Nekoosa (48), St. Regis Paper (32), Union Camp (56), and Westvaco Corp. (35). PUBLISHING – This group including newspapers, periodicals, and books continues to turn in a below average performance going back to the early part of 1972. Although downside objectives are beginning to be realized, would continue to avoid purchases untll 1mproving relative strength is present. RADIO-TV – The drastic correction in the broadcasting stocks appears to be near an end. Longterm downside objectlves in a great many of these 1ssues are being reached or have been realized. However, would continue to avoid group as considerable time will be needed to 1m- prove existing patterns. RAILROADS – Long-term group action has improved and feel that at current levels a number of stocks appear attractlve for purchase. These stocks are selling at the lower level of potentlal support areas indicating higher prices. These would include Burlington Northern (43), Norfolk & Western (68) Santa Fe Industries (34), Seaboard Coastline(30) ,-and Southern Pacific.(34). RAILROAD EQUIPMENT – The leader in this group has been Pullman (65), which at current levels should be watched for potential deterioration. ACF Industries (52), and Amsted Industries (46), both look attract1ve at current levels and on minor weakness feel purchases can be justified. RETAILING – The long-term group strength of the department stores remams negative With the exception of Sears (86), which has recently broken out of a short-term base Wh1Ch counts in the overhead supply mto high 90 area and J. C. Penney (72), which counts into the low 80 area. The most improved area in the retailing group is in the food stores. Would suggest possible purchase candidates to include American Stores (32), Colonial Stores (24), Safewav (40), and Wmn- Dixie (43) . Dow-Jones Industrials (1200 p. m.) 873.12 S & P Comp (1200 p.m.) 96.91 Cumulatlve Index (3/21/74) 624.99 ANTHONY W. TABELL DELAFIELD. HARVEY. TAB ELL RJS/jb No statement or eXpreSSion of OpInion or any other motter herein tonte.ned IS, or 15 to be deemed 10 be, directly or Indirectly, on offer or the hc,'otlon of on offer 10 buy or sell cny securtty referred 10 or merotloned The molter IS presented merely for the convenience of the subSCriber WI'IIle oNe beheve the sources of our Information to be reliable, we In no way represent or guorontee the accuracy thereof nor of the statements mude here!n Any action to be taen by the subSCriber should be Ixued on hiS own !nvestlgatlon and Information Janney Montgomery Scott, Inc, as a corporation, and ItI officers or employees, may now have, or may later lake, positions or trades In respect 10 any secUrities mentioned In thiS or any future Issue, and such POSition may be different from any views now Or hereafter eypressed In Ihis or any other ISsue Janney Montgomery Scott, Inc, which IS registered With the SEC as on Investment adVisor, may give adVice to tts Investment adVISory and olhel customers !ndependently of any statements made !n thiS or In any other Issue Further !nformatlOn on any security mentioned heHlIn IS available on request