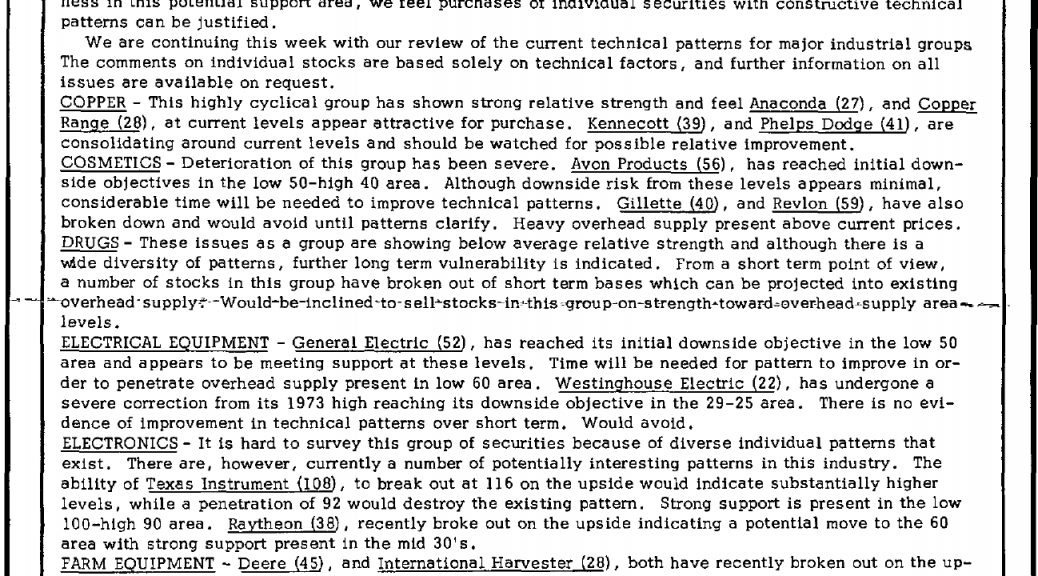 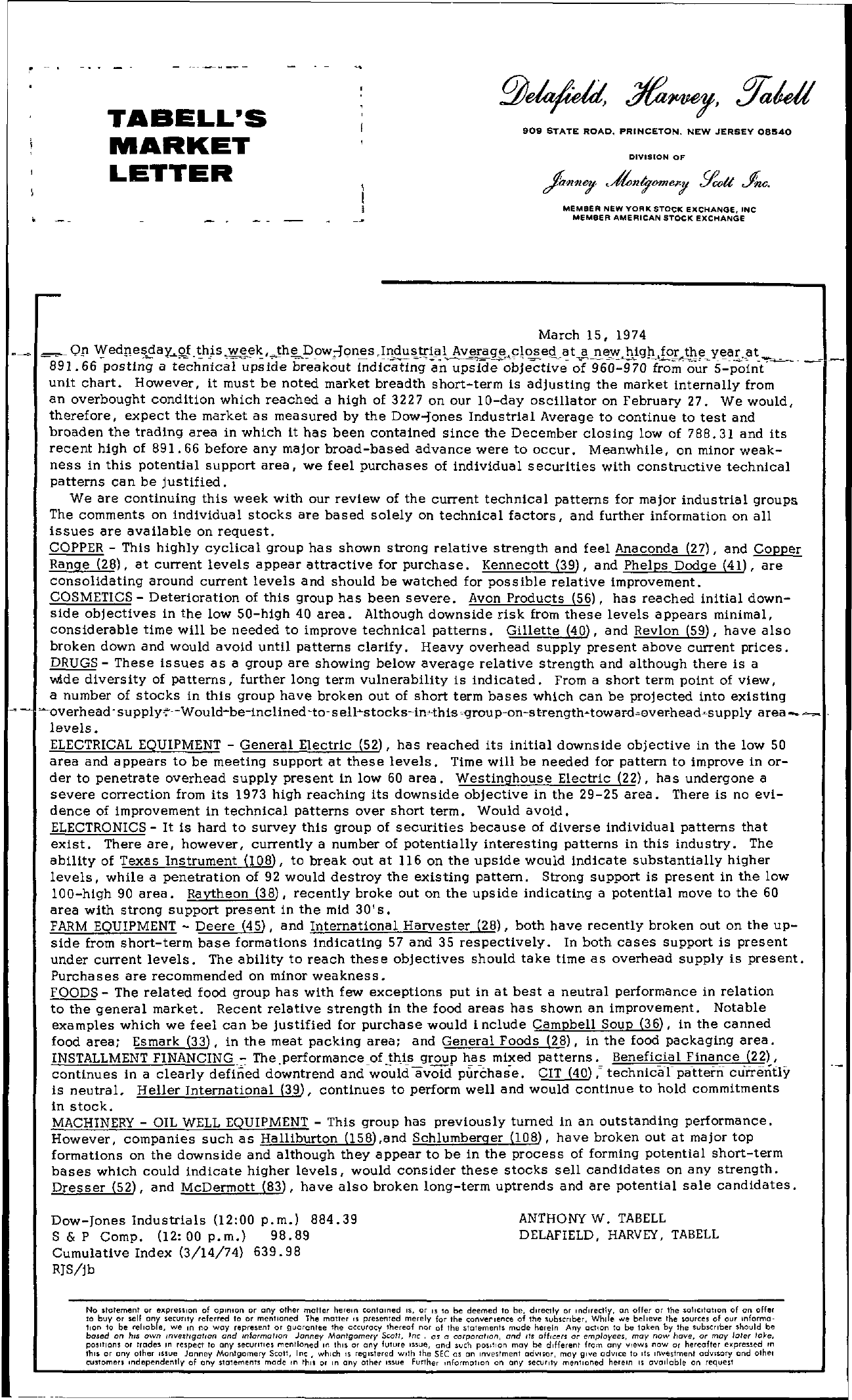 TABELL'S MARKET LETTER 909 STATE ROAD, PRINCETON. NEW JERSEY 08540 DIVISION OF MEMBER NEW YORK STOCK eXCHANGE, INC MEMBER AMERICAN STOCK EXCHANGE March 15, 1974 – 011 V! ednesjaYRJ ,thJs ,,.e ,.th.Dow;fons .Indu'l.l!.lJ\ve(I,c!ose(La t.Lnv;J1J.gh.Il'yeaa, 891. 66 posting a technical upside breakout indicating an upside objective of 960-970 from our 5-point unit chart. However, it must be noted market breadth short-term is adjusting the market internally from an overbought condition which reached a high of 3227 on our IO-day oscillator on February 27. We would, therefore, expect the market as measured by the Dow-fones Industrial Average to continue to test and broaden the trading area in which it has been contained since the December closing low of 788.31 and its recent high of 891.66 before any major broad-based advance were to occur. Meanwhile, on minor weakness in this potential support area, we feel purchases of individual securities with constructive technical patterns ca n be Justified. We are continuing this week with our review of the current technical patterns for major industrial groups The comments on individual stocks are based solely on technical factors, and further information on all issues are available on request. COPPER – This highly cyclical group has shown strong relative strength and feel Anaconda (27), and Copper Range (28), at current levels appear attractive for purchase. Kennecott (39), and Phelps Dodge (41), are consolidating around current levels and should be watched for possible relative improvement. COSMETICS – Deterioration of this group has been severe. Avon Products (56), has reached initial downside objectives in the low 50-high 40 area. Although downside risk from these levels appears minimal, considerable time will be needed to improve technical patterns. Gillette (40), and Revlon (59), have also broken down and would avoid until patterns clarify. Heavy overhead supply present above current prices. DRUGS – These issues as a group are showing below average relative strength and although there is a wide diversity of patterns, further long term vulnerability is indicated. From a short term point of view, a number of stocks in this group have broken out of short term bases which can be projected into existing – – overhead' supplyo—Would-be-inclined -to' s ell-stocks-in'-this -group-on- trengthtowari0veheadsupply area levels. ELECTRICAL EQUIPMENT – General Electric (52), has reached its initial downside objective in the low 50 area and appears to be meeting support at these levels. Time will be needed for pattern to improve in order to penetrate overhead supply present in low 60 area. Westinghouse Electric (22), has undergone a severe correction from its 1973 high reaching its downside objective in the 29-25 area. There is no evidence of improvement in technical patterns over short term. Would avoid. ELECTRONICS – It is hard to survey this group of securities because of diverse individual patterns that exist. There are, however, currently a number of potentially interesting patterns in this industry. The ability of Texas Instrument (108), to break out at 116 on the upside would indicate substantially higher levels, while a penetration of 92 would destroy the existing pattern. Strong support is present in the low lOa-high 90 area. Raytheon (38), recently broke out on the upside indicating a potential move to the 60 area with strong support present in the mid 30' s. FARM EQUIPMENT – Deere (45), and International Harvester (28), both have recently broken out on the upside from short-term base formations indicating 57 and 35 respectively. In both cases support is present under current levels. The ability to reach these objectives should take time as overhead supply is present. Purchases are recommended on minor weakness. FOODS – The related food group has with few exceptions put in at best a neutral performance in relation to the general market. Recent relative strength in the food areas has shown an improvement. Notable examples which we feel can be justified for purchase would include Campbell Soup (36), in the canned food area; Esmark (33), in the meat packing area; and General Foods (28), in the food packaging area. INSTALLMENT FINANCING – The,performance of this group has mixed patterns. Beneficial Finance (22), continues in a clearly defi;)'ed downtrend and 'wotildavoid purchase. CIT (40) ,0 technica-l patterll currently is neutral. Heller International (39), continues to perform well and would continue to hold commitments in stock. MACHINERY – OIL WELL EQUIPMENT – This group has previously turned in an outstanding performance. However, companies such as Halliburton (1581.and Schlumberger (108), have broken out at major top formations on the downside and although they appear to be in the process of forming potential short-term bases which could indicate higher levels, would consider these stocks sell candidates on any strength. Dresser (52), and McDermott (83), have also broken long-term uptrends and are potential sale candidates. Dow-Jones Industrials (1200 p.m.) 884.39 S & P Compo (12 00 p.m.) 98.89 Cumulative Index (3/14/74) 639.98 RJS/jb ANTHONY W. TABELL DELAFIELD, HARVEY, TABELL No tolement or expression of op,rllon or any olner motter herein contolned IS, or 15 10 be deemed 10 be, dlret1IV or Indirectly. on offer or the sollCltollon of on offer to buy or sell any secuflty referred to or mentioned The maHer IS presented merely for the converlcnce of Ihe subSCriber, While we believe the sources of our Information to be reliable, we 10 no way represent or guarantee the accuracy thereof nor of the statements mode herein Any action fa be token by the subKrlber should be baJed on hl5 own IOVettlgotlon and mformallon Janney Montgomery Scott, Inc, as a corpora/Ion, and 1/5 off,cers or employees, may now have, or may later lo).-e, positions or trades In respect 10 any secu(l1les mentioned In Ihl or any future Issue, and such pOSition may be different from any views now or hereafter expressed In thiS or any other ISsue Janney Montgomery Scott, Inc, which IS registered With the SEC as on Investment adVisor, may give adVice to Its IOveslment adVISOry and olhel customers Independently of any statements mode In thiS or In any other luue Further mformollOn on any secuflly mentIOned herein IS available on request