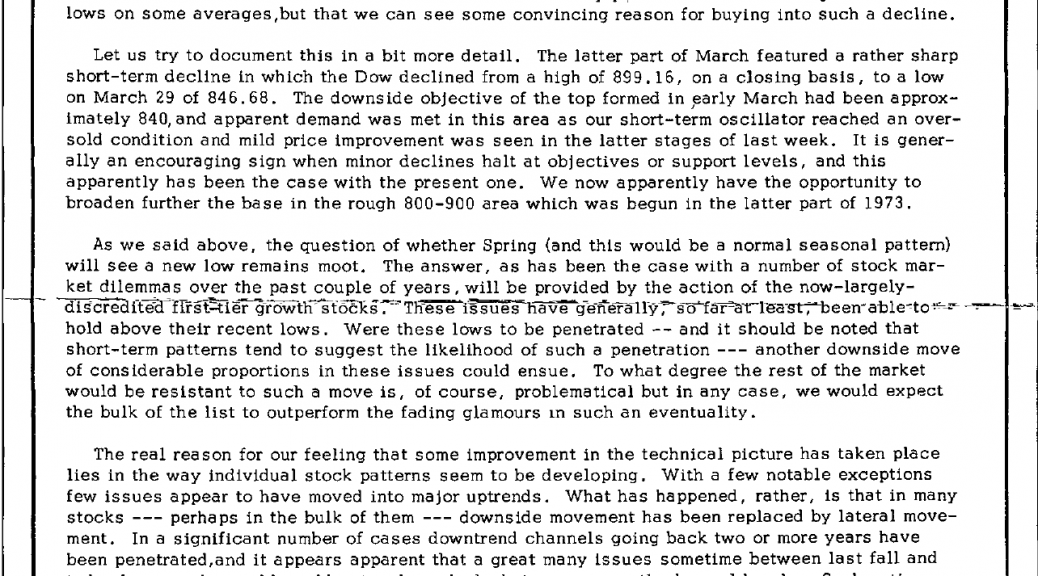 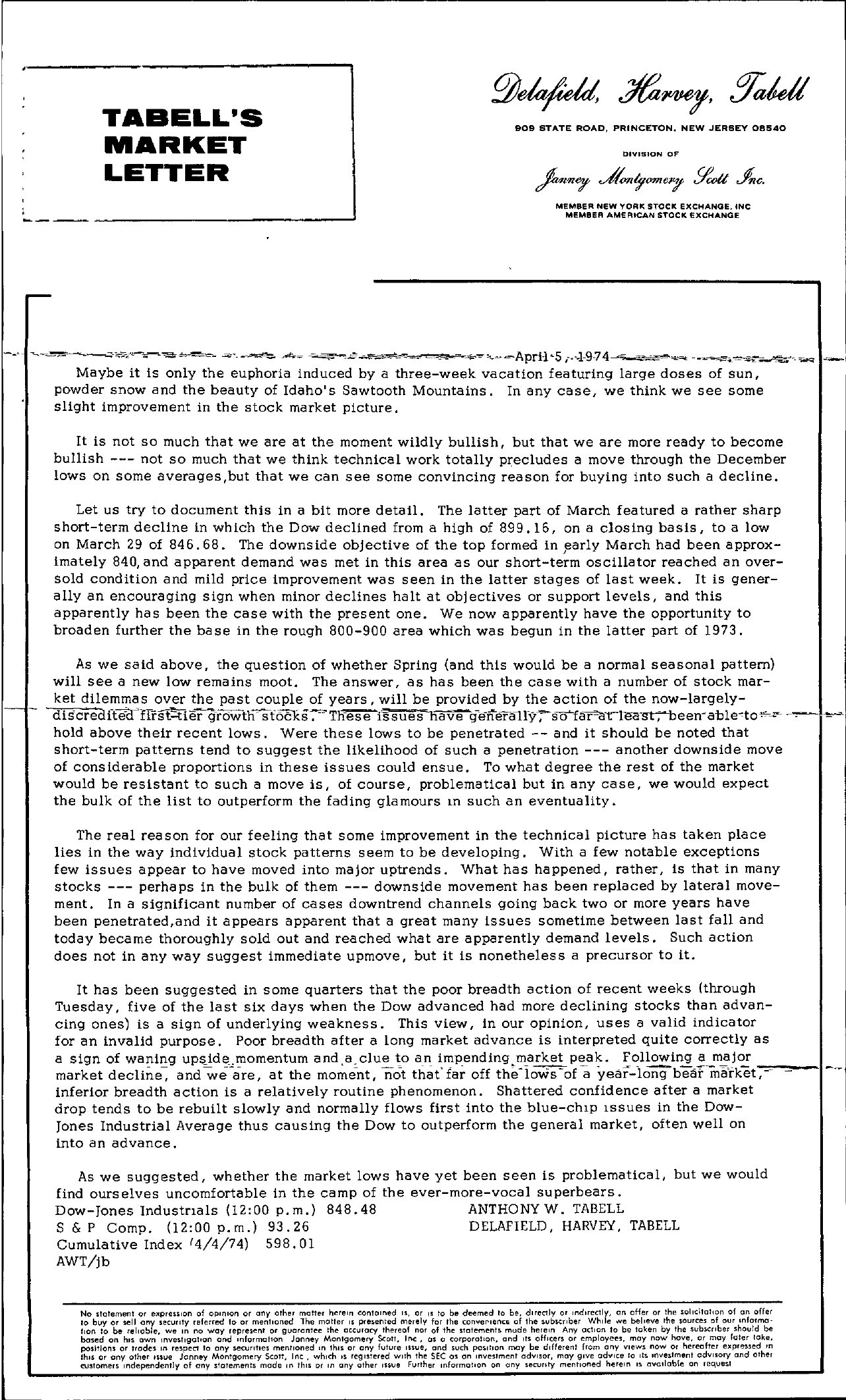 ————–, TABELL'S MARKET LETTER , ….l 909 STATE ROAD, PRINCETON. NEW JERSEY 08540 DIVISION OF MEMBER NEW YORK STOCK eXCHANGE, INC MEMBER AMERICAN STOCI( EXCHANGE – -c……;;;-.,-.- …4o;- — – '–!!'- '-…,…o-AprH . . 5r.–1-974 -…………- -..'i.–.-.;; I Maybe it is only the euphoria induced by a three-week vacation featuring large doses of sun, powder snow and the beauty of Idaho's Sawtooth Mountains. In any case, we think we see some slight improvement in the stock market picture. It is not so much that we are at the moment wildly bullish, but that we are more ready to become bullish — not so much that we think technical work totally p,ecludes a move through the December lows on some averages ,but that we can see some convincing reason for buying into such a decline. Let us try to document this in a bit more detail. The latter part of March featured a rather sharp short-term decline in which the Dow declined from a high of 899.16, on a cloSing basis, to a low on March 29 of 846.68. The downside objective of the top formed in early March had been approx- imately 840, and apparent demand was met in this area as our short-tem oscillator reached an over- sold condition and mild price improvement was seen in the latter stages of last week. It is generally an encouraging sign when minor declines halt at objectives or support levels, and this apparently has been the case with the present one. We now apparently have the opportunity to broaden further the base in the rough 800-900 area which was begun in the latter part of 1973. — As we said above, the question of whether Spring (and this would be a normal seasonal pattern) will see a new low remains moot. The answer, as has been the case with a number of stock market dilemmas over the past couple of years, will be provided by the action of the now-Iargelydiscredfte'drrj'stner g-rowtn'sl6cKs-TI1-ese Issues nave generollysofa-A3rl!a-sr,–been-able-to'– –,- – hold above their recent lows. Were these lows to be penetrated — and it should be noted that short-term patterns tend to suggest the likelihood of such a penetration — another downside move of considerable proportions in these issues could ensue. To what degree the rest of the market would be resistant to such a move is, of course, problematical but in any case, we would expect the bulk of the list to outperform the fading glamours In such an eventuality. The real reason for our feeling that some improvement in the technical picture has taken place lies in the way individual stock patterns seem to be developing. With a few notable exceptions few issues appear to have moved into major uptrends. What has happened, rather, is that in many stocks — perhaps in the bulk of them — downside movement has been replaced by lateral movement. In a significant number of cases downtrend channels going back two or more years have been penetrated,and it appears apparent that a great many issues sometime between last fall and today became thoroughly sold out and reached what are apparently demand levels. Such action does not in any way suggest immediate upmove, but it is nonetheless a precursor to it. It has been suggested in some quarters that the poor breadth action of recent weeks (through Tuesday, five of the last six days when the Dow advanced had more declining stocks than advan- cing ones) is a sign of underlying weakness. This view, in our opinion, uses a valid indicator for an invalid purpose. Poor breadth after a long market advance is interpreted quite correctly as a sign market odfecwlainneing upsIde,momentum andwe-are, at the and,a,clue to moment, not tahnati'mfapreonfdfintghm-arlketofpeaakY.earF-oilolnogwbienagrmaa-mrkaejot,r ,–,.-I- inferior breadth action is a relatively routine phenomenon. Shattered confidence after a market drop tends to be rebuilt slowly and normally flows first into the blue-chIp Issues in the Dow- Jones Industrial Average thus causing the Dow to outperform the general market, often well on into an advance. As we suggested, whether the market lows have yet been seen is problematical, but we would find ourselves uncomfortable in the camp of the ever-more-vocal superbears. Dow-Jones IndustrIals (1200 p. m.) 848.48 ANTHONY W. TABELL S & P Compo (1200 p.m.) 93.26 DELAFIELD, HARVEY, TABELL Cumulative Index '4/4/74) 598.01 AWT/jb No statement or epresslon of opinion or any OTher matter herein contolned IS, or IS to be deemed to be. directly or indirectly, on offer or the solicitatIOn of an offer to buy or sell onr, security referred to or mentioned The moiler IS presented merely for the converlenCE of the subKTlber While we believe the sources of our information to be rellob e, we In no way represent or guarantee the accurocy thereof nor of the statements mude herein Any ocllon to be token by the subs.crlber should be based on hiS own Investlgollon ond Informatron Jonney Montgomery Scoll, Inc, as 0 corporatron, and Its officers or employees, may now have, or may later lake, poslflofl5 or trades In respect to ony securities menlloned In thiS or ony future Issue, and such POSITion may be different from any views now or hereafter expressed In thu or ony other ISsue Janney Montgomery Scott, Inc, which IS registered With the SEC os on Investment adVisor, may give adVice 10 Its mvestment adVISOry and other customers Independently of any stoTements mode III thiS or In any other Issue Further information on any security mentioned herem IS available on request