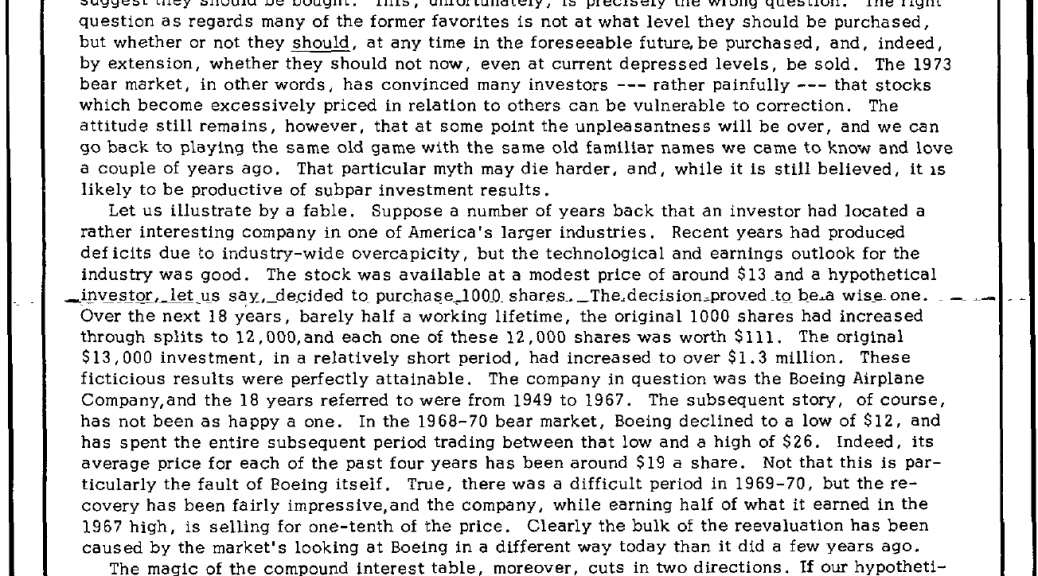 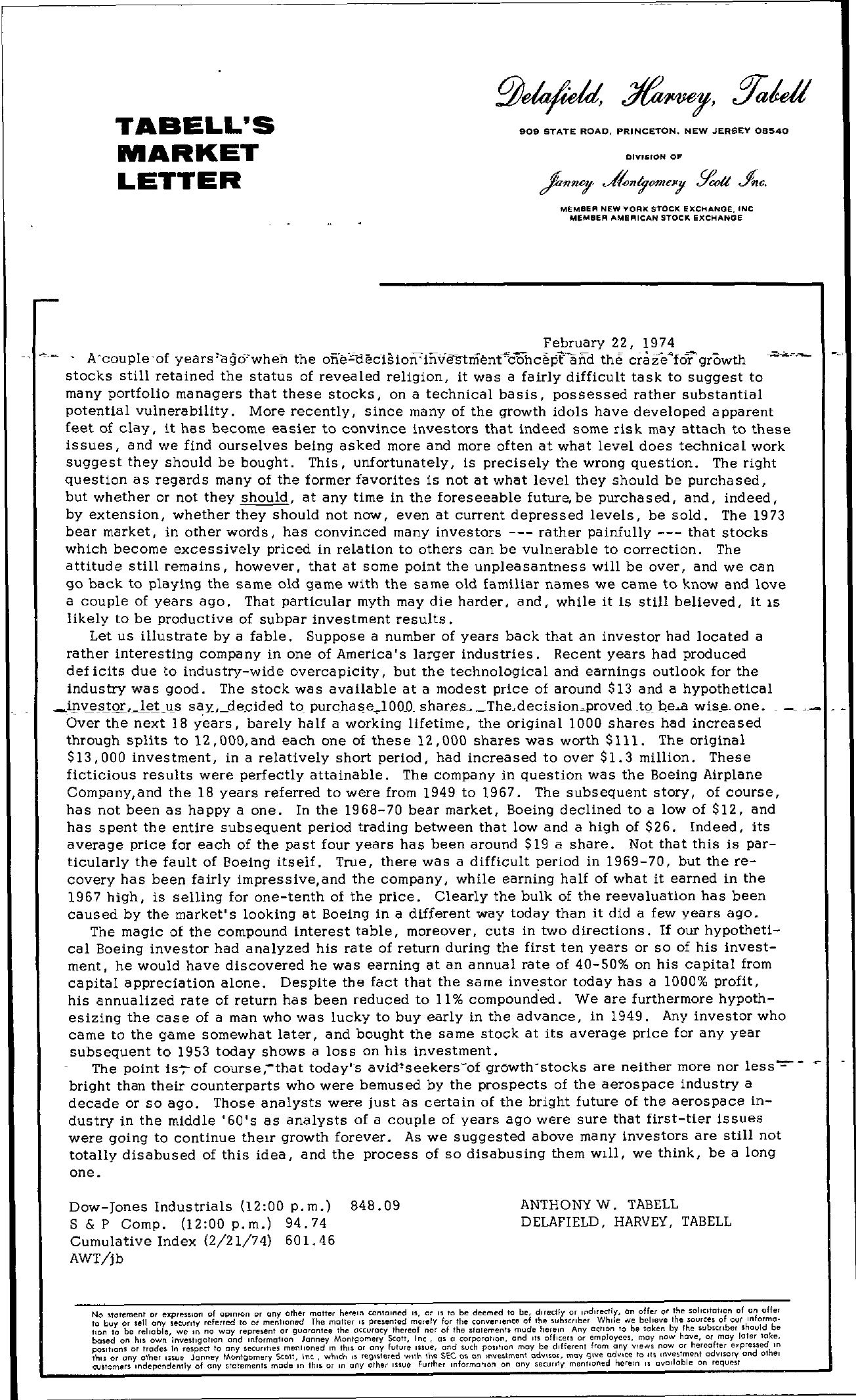 TABELL'S MARKET LETTER 909 STATE ROAD, PRINCETON. NEW JERSEY 08540 DIVISION OF MEMBER NEW YORK STOCK EXCHANGE, INC MEMBER AMERICAN STOCK EXCHANGE February 22, 1974 the craze- . ..-;– A 'couple'of yearsgcwheh the one;tleclsionnvErstmentCbhcepfand for growth -Zr-.;e;…. stocks still retained the status of revealed religion, it was a fairly difficult task to suggest to many portfolio managers that these stocks, on a technical basis, possessed rather substantial potential vulnerability. More recently, since many of the growth idols have developed apparent feet of clay, it has become easier to convince investors that indeed some risk may attach to these issues, and we find ourselves being asked more and more often at what level does technical work suggest they should be bought. This, unfortunately, is precisely the wrong question. The right question as regards many of the former favorites is not at what level they should be purchased, but whether or not they should, at any time in the foreseeable future, be purchased, and, indeed, by extenSion, whether they should not now, even at current depressed levels, be sold. The 1973 bear market, in other words, has convinced many investors — rather painfully — that stocks which become excessively priced in relation to others can be vulnerable to correction. The attitude still remains, however, that at some point the unpleasantness will be over, and we can go back to playing the same old game with the same old familiar names we came to know and love a couple of years ago. That particular myth may die harder, and, while it is still believed, it is likely to be productive of subpar investment results. Let us illustrate by a fable. Suppose a number of years back that an investor had located a rather interesting company in one of America's larger industries. Recent years had produced def icits due to industry-wide overcapicity, but the technological and earnings outlook for the industry was good. The stock was available at a modest price of around 13 and a hypothetical ilwJlsJor ,jllS sa',decided to purchaselOOO shaces. Thedecisionproved to pe.a wise one. – Over the next 18 y'ears, barely half a working lifetime, the original 1000 shares had increased through splits to 12,000,and each one of these 12,000 shares was worth 111. The original 13,000 investment, in a relatively short period, had increased to over 1.3 million. These flcticious results were perfectly attainable. The company in question was the Boeing Airplane Company,and the 18 years referred to were from 1949 to 1967. The subsequent story, of course, has not been as happy a one. In the 1968-70 bear market, Boeing declined to a low of 12, and has spent the entire subsequent period trading between that low and a high of 26. Indeed, its average price for each of the past four years has been around 19 a share. Not that this is par- ticularly the fault of Eoeing itself. True, there was a difficult period in 1969-70, but the re- covery has been fairly impresslve,and the company, while earning half of what it earned in the 1967 high, is selling for one-tenth of the price. Clearly the bulk of the reevaluation has been caused by the market's looking at Boeing in a different way today than it did a few years ago. The magic of the compound interest table, moreover, cuts in two directions. If our hypotheti- cal Eoeing investor had analyzed his rate of return during the first ten years or so of his invest- ment, he would have discovered he was earning at an annual rate of 40-50 on his capital from capital appreciation alone. Despite the fact that the same investor today has a 1000 profit, his annualized rate of return has been reduced to 11 compounded. We are furthermore hypoth- esizing the case of a man who was lucky to buy early in the advance, in 1949. Any investor who came to the game somewhat later, and bought the same stock at its average price for any year subsequent to 1953 today shows a loss on his Investment. The pOint Is–;- of course,-that todays avld'seekers-of growth'stocks are neither more nor less— bright than their counterparts who were bemused by the prospects of the aerospace industry a decade or so ago. Those analysts were just as certain of the bright future of the aerospace in- dustry in the middle '60's as analysts of a couple of years ago were sure that first-tier issues were going to continue their growth forever. As we suggested above many investors are still not totally disabused of this idea, and the process of so disabusing them Will, we think, be a long one. Dow-Jones Industrials (1200 p.m.) S & P Compo (1200 p.m.) 94.74 Cumulative Index (2/21/74) 601.46 AWT/jb 848.09 ANTHONY W. TABELL DELAFIELD, HARVEY, TABELL No statement or expreSlOI1 of op'nion or any other metter herein contolned IS, or IS 10 be deemed to be, directly or ,ndirectly, on offer or the sollclhJllon of on offer to buy or sell ony security referred to or menlloned The matter IS presented merely for the convellenCe of the subscriber While Ne believe the sources of our Informoflon to be reliable, we In no way represent or guorontee the accuracy thereof nof of the stotementt mude herein Any action to be token by the subscflber should be based on hiS own Investigation and mformollon Janney Montgomery Scott, Inc, as a corporation, ond Its officers or employees, may now have, or may later toke, positions or trades In respect to any securities mentioned In thiS or any future Issue, and such position may be different from any vle…,s now or hereafter el'pressedhln 1lIs or ony o'her ISSUII Janney Montgomery Scott, Inc, which l registered wlln Ine SEC os on Investment adVisor, may gl….e ad.. ,e.e to Its ((\vestmllnt adVISOry and ot III customers Hldepcndently of any statements mode Hl thIS or In any other Issue Further Informa'lon on ony securoty mentIoned herein IS ovodable on request