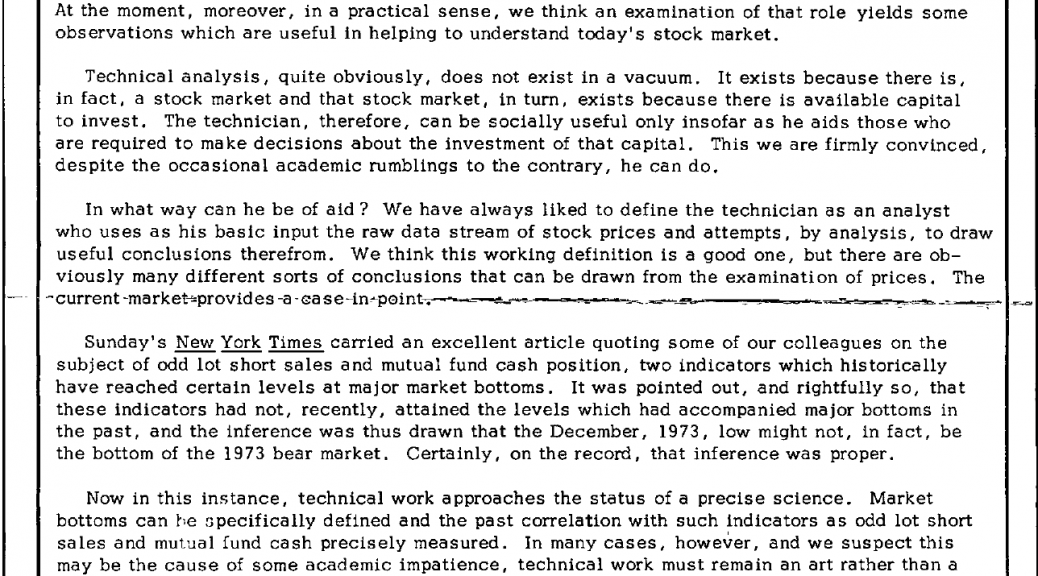 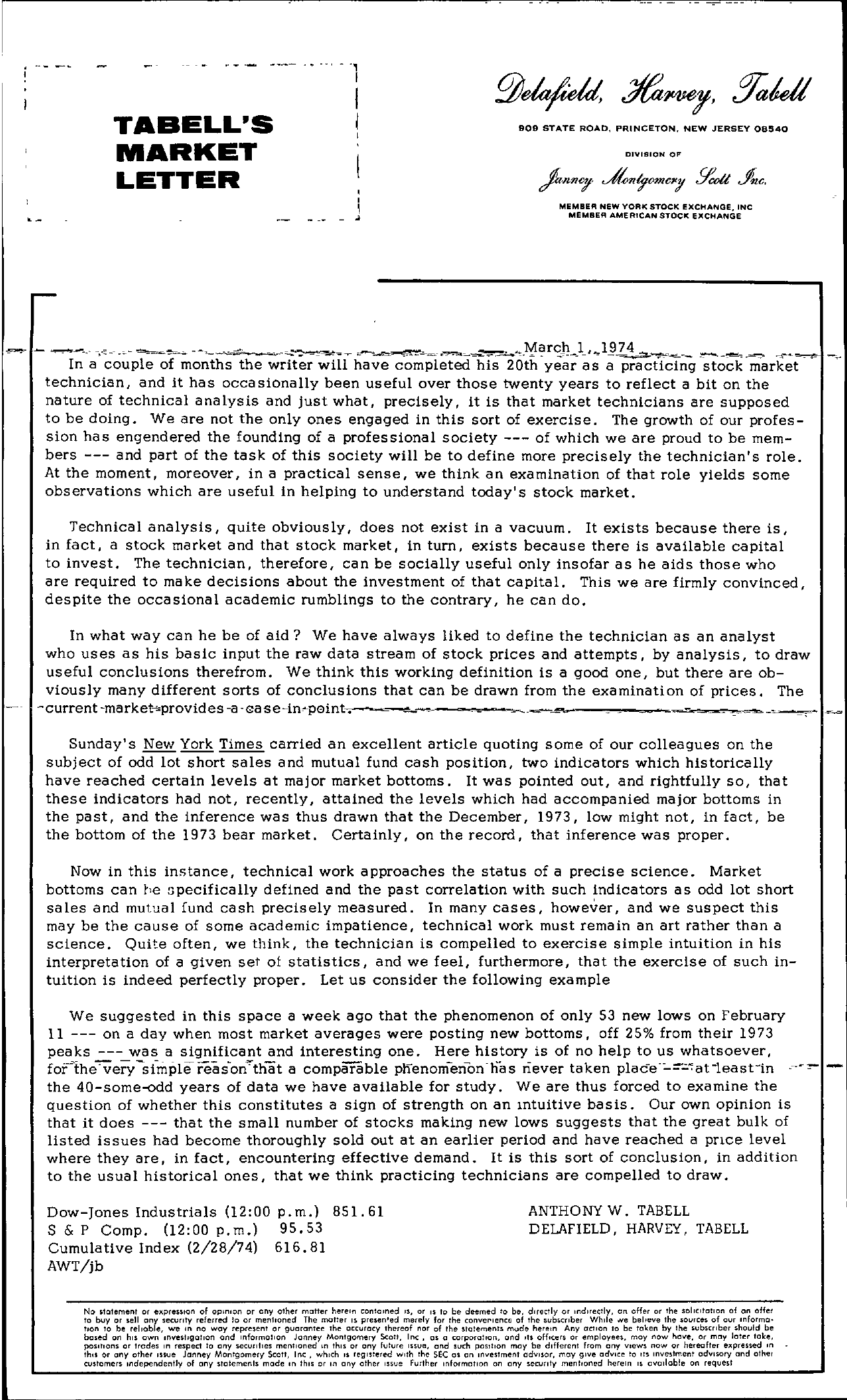 – -1 I TABELL'S MARKET 1 I I LETTER – ,, I 909 STATE ROAD, PRINCETON, NEW JERSEY 081540 DIVISION 01 MEMBER NEW YORK STOCK EXCHANGE, INC MEMBER AMERICAN STOCK EXCHANGE — .' -.'-.– — – –.-;. . rc..h-t,..,,1J)oI4 — ..,- In a couple of months the writer will have completed his 20th year a s a practicing stock market technician, and it has occasionally been useful over those twenty years to reflect a bit on the nature of technical analysis and just what, preCisely, it is that market technicians are supposed to be doing. We are not the only ones engaged in this sort of exercise. The growth of our profes- sion has engendered the founding of a professional society — of which we are proud to be mem- bers — and part of the task of this society will be to define more precisely the technician's role. At the moment, moreover, in a practical sense, we think an examination of that role yields some observations which are useful in helping to understand today's stock market. Technical analysis, quite obviously, does not exist in a vacuum. It exists because there is, in fact, a stock market and that stock market, in turn, exists because there is available capital to invest. The technician, therefore, can be socially useful only insofar as he aids those who are required to ma ke decisions about the investment of that capital. This we are firmly convinced, despite the occasional academic rumblings to the contrary, he can do. In what way can he be of aid We have always liked to define the technician as an analyst who uses as his basic input the raw data stream of stock prices and attempts, by analysis, to draw useful conclusions therefrom. We think this working definition is a good one, but there are ob- viously many different sorts of conclusions that can be drawn from the examination of prices. The -current-market,provides-a-case-inp0int. – …….,I Sunday's New York Times carried an excellent article quoting some of our colleagues on the subject of odd lot short sales and mutual fund cash position, two indicators which historically have reached certain levels at major market bottoms. It was pointed out, and rightfully so, that these indicators had not, recently, attained the levels which had accompanied major bottoms in the past, and the inference was thus drawn that the December, 1973, low might not, in fact, be the bottom of the 1973 bear market. Certainly, on the record, that inference was proper. Now in this instance, technical work approaches the status of a precise science. Market bottoms can be Gpecifically defined and the past correlation with such indicators as odd lot short sales and mutual fund cash precisely measured. In many cases, however, and we suspect this may be the cause of some academic impatience, technical work must remain an art rather than a science. Quite often, we think, the technician is compelled to exercise simple intuition in his interpretation of a given set 01 statistics, and we feel, furthermore, that the exercise of such intuition is indeed perfectly proper. Let us conSider the following example We suggested in this space a week ago that the phenomenon of only 53 new lows on February II — on a day when most market averages were posting new bottoms, off 25 from their 1973 peaks — was a significant and interesting one. Here history is of no help to us whatsoever, forthe'Verys1mpleriiason-that a comparable pnenom-enonnas never taken place-'–at-Ieast-in the 40-some-odd years of data we have available for study. We are thus forced to examine the question of whether this constitutes a sign of strength on an mtuitive basis. Our own opinion is that it does — that the small number of stocks making new lows suggests that the great bulk of listed issues had become thoroughly sold out at an earlier period and have reached a pnce level where they are, in fact, encountering effective demand. It is this sort of conclusion, in addition to the usual historical ones, that we think practicing technicians are compelled to draw. Dow-Jones Industrials (1200 p.m.) 851.61 S & P Compo (1200 p.m.) 95.53 Cumulative Index (2/28/74) 616.81 AWT/jb ANTHONY W. TABELL DELAFIELD, HARVEY, TABELL No statement or expressIon of opInion or any other motter herein contolned IS, or IS 10 be deemed to be, directly or indirectly, on offer or the sollcltotlon of on offer to b….y or sell ony security referred to or men1!oned The molter IS presen'ed merely for the convellenc of the subSCriber While He believe the sources of our Informa tlon to be rel,oble, we In no woy represent or guorontee The occurocy Ihereof nor of the stotements mode herem Any Oellon 10 be token by Ihe subscriber should be bosed on hiS own InVestlQotlon ond Informollon Jonney Montgomery Scol', Inc, os 0 corporation, ond 115 officers or employees, moy now hove, or moy loter toke, poSitions or trodes m respect loony si'!Curihes mentioned In thiS or ony future Issue, ond such position moy be different from ony views now or hereofrer epressed m HilS or ony other Issue Janney Montgomery Scoll, Inc, whICh IS registered With the SEC as on Investment adVisor, may give adVice to lIS Investment adVISOry and othel customers Independently of any stolements mode In Ih,s or In any other Issue Further Informotlon on any security menlloned herein IS available on request