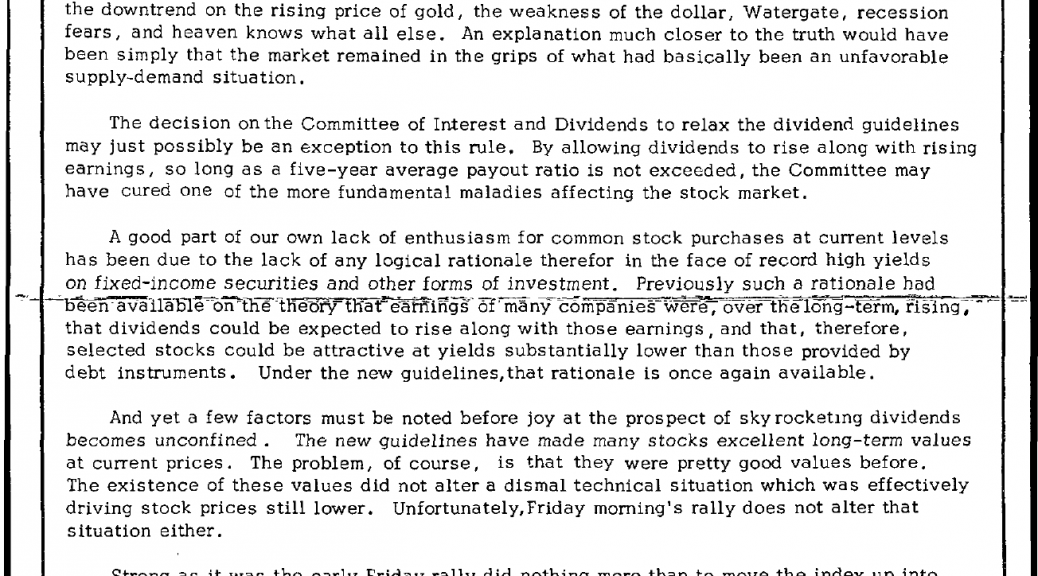 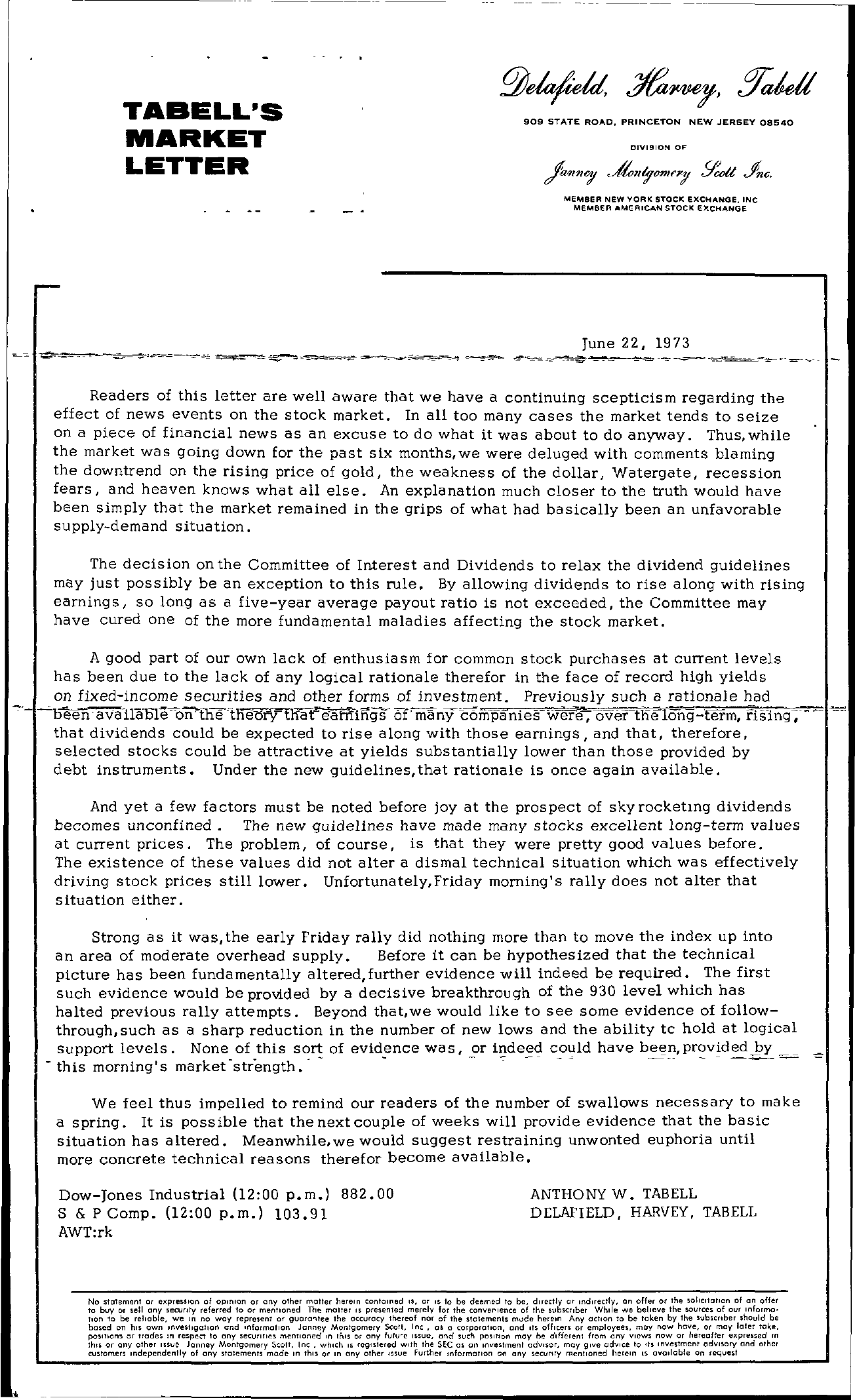 – – – ——– – – – – – – ———— TABELL'S MARKET LETTER 909 STATE ROAD, PRINCETON NEW JERSEY 08540 DIVISION OF MEMBER NEW VORK STOCK eXCHANGE, INC MEMBER AMERICAN STOCK EXCHANGE . . — June 22, 1973—-;o ——,,'';; ,…. .'…- T ' ..,.– '-;;;.. .,,.,.. – -. – — Readers of this letter are well aware that we have a continuing scepticism regarding the effect of news events on the stock market. In all too many cases the market tends to seize on a piece of financial news as an excuse to do what it was about to do anyway. Thus, while the market was gOing down for the past six months,we were deluged with comments blaming the downtrend on the rising price of gold, the weakness of the dollar, Watergate, recession fears, and heaven knows what all else. An explanation much closer to the truth would have been simply that the market remained in the grips of what had basically been an unfavorable supply-demand situation. The decision on the Committee of Interest and Dividends to relax the dividend guidelines may just possibly be an exception to this rule. By allowing dividends to rise along with rising earnings, so long as a five-year average payout ratio is not exceeded, the Committee may have cured one of the more fundamental maladies affecting the stock market. A good part of our own lack of enthusiasm for common stock purchases at current levels has been due to the lack of any logical rationale therefor in the face of record high yields on fixed-income securities and other forms of investment. Previously such a rationale had -'- lj'een 'aval1able–oil'111e lnebrrtRat'eaffiil1gr of' many companieinvere–;overtllelong-term, rislng– – '' that dividends could be expected to rise along with those earnings, and that, therefore, selected stocks could be attractive at yields substantially lower than those provided by debt instruments. Under the new guidelines, that rationale is once again available. And yet a few factors must be noted before joy at the prospect of sky rocketmg dividends becomes unconfined. The new guidelines have made many stocks excellent long-term values at current prices. The problem, of course, is that they were pretty good values before. The existence of these values did not alter a dismal technical situation which was effectively driving stock prices still lower. Unfortunately, Friday morning's rally does not alter that situation either. Strong as it was, the early Friday rally did nothing more than to move the index up into an area of moderate overhead supply. Before it can be hypothesized that the technical picture has been fundamentally altered,further evidence will indeed be required. The first such evidence would be provided by a decisive breakthrough of the 930 level which has halted previous rally attempts. Beyond that,we would like to see some evidence of follow- through, such as a sharp reduction in the number of new lows and the ability tc hold at logical support levels. None of this sort of evid!mce was, or indeed could have been,providedjy -this morning's market-strength.' – – – —– We feel thus impelled to remind our readers of the number of swallows necessary to make a spring. It is possible that the next couple of weeks will provide evidence that the baSic situation has altered. Meanwhile,we would suggest restraining unwonted euphoria until more concrete technical reasons therefor become available. Dow-Jones Industrial (1200 p.m.) 882.00 S & P Compo (1200 p.m.) 103.91 AWTrk ANTHONY W. TAB ELL DELAFIELD, HARVEY, TABELL No statement or expression of opinion or ony olher motter herein contolned IS, or IS to be deemed 10 be, directly or indirectly, an offer or the sollcltotlon of on offer to buy or sell ony security referred to or mentioned The molter IS presented merely for the convellcnCEI of the subscriber While oNe believe the sources of our Informohan 10 be reliable, we In no way repreent or guora'ltee The accuracy thereof nor of the statements m.lCe here, Any actIOn to be token by the subscriber should be based on hiS own Investigation ond .nformatlon Janney Montgomery Scott, Inc, as 0 corporation, and ITS officers or employees, may now have, or moy later Toke, poSitions or trades In reSpect to any SeCUrities mentioned In trlls or any futu'e Issue, and such pOSition may be different from any views now or hereafter expressed In thIS or any other Issue Janney Montgomery Scott, Inc, which IS registered With the SEC as on ,vestment adVisor, moy give adVice to ,ts Investment adVisory and othel customers ,dependently of any staTemenTS mode In thIS or ' any other Issue Further InformaTion on any secuflty mentIOned herein IS available on request