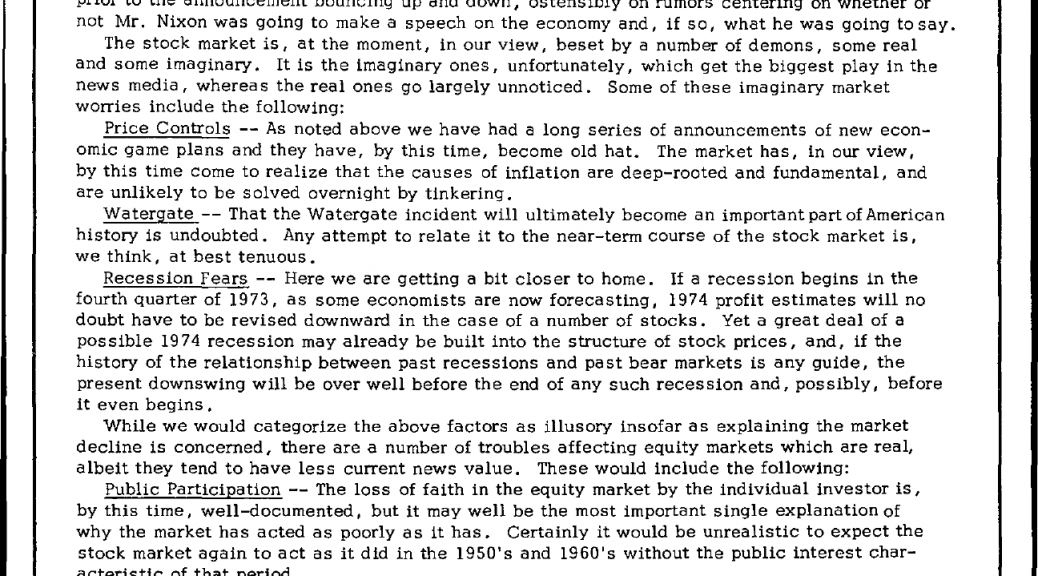 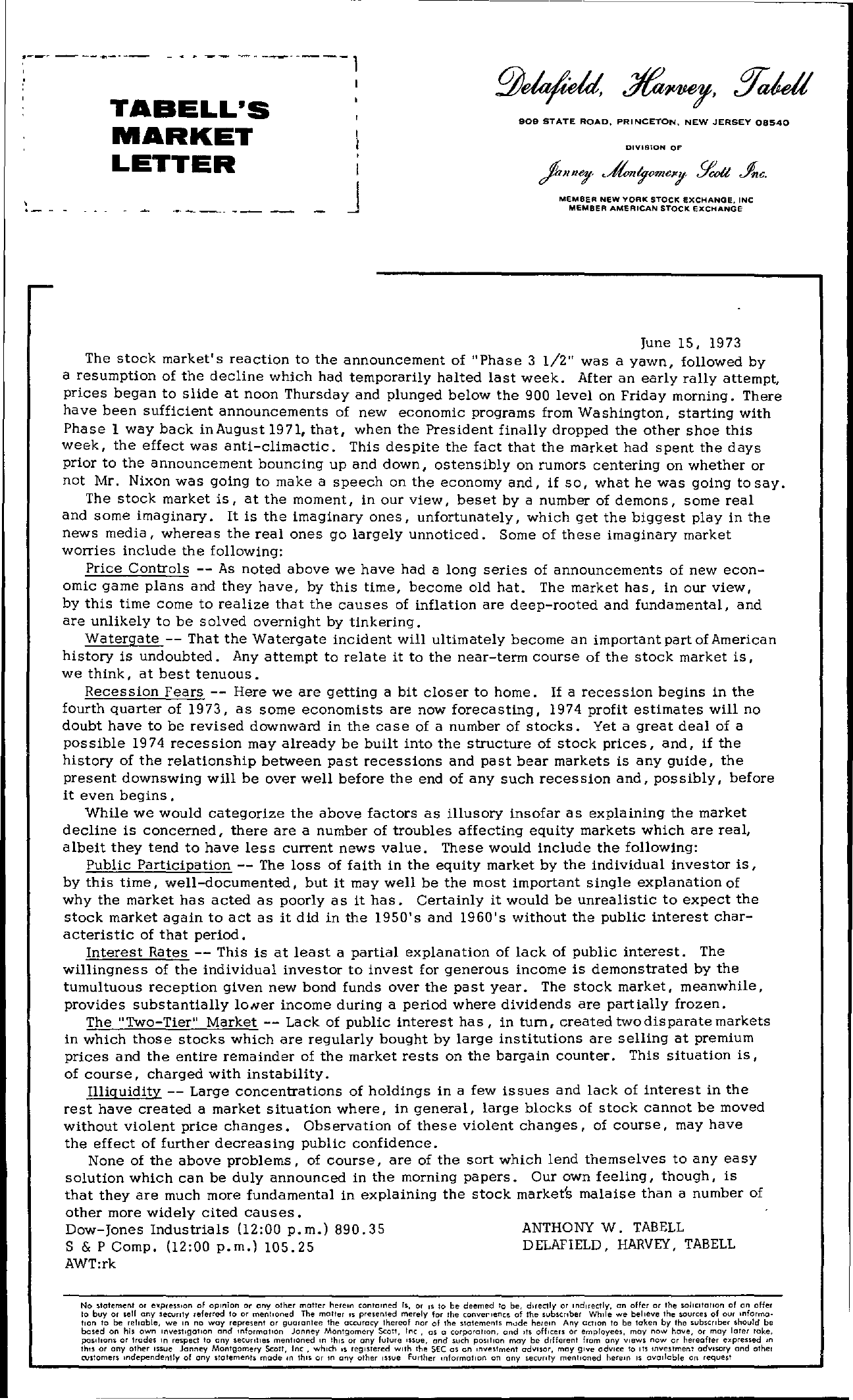 TABELL'S MARKET LETTER I J 909 STATE ROAD, PRINCETON. NEW JERSEY 08540 DIVISION OF MEMBSA NIEW VORK STOCK eXCHANGE, INC MEMBER AMERICAN STOCK eXCHANGE June 15, 1973 The stock market's reaction to the announcement of Phase 3 1/2 was a yawn, followed by a resumption of the decline which had temporarily halted last week. After an early rally attempt, prices began to slide at noon Thursday and plunged below the 900 level on Friday morning. There have been sufficient announcements of new economic programs from Washington, starting with Phase 1 way back in August 1971, that, when the President finally dropped the other shoe this week, the effect was anti-climactic. This despite the fact that the market had spent the days prior to the announcement bouncing up and down, ostensibly on rumors centering on whether or not Mr. Nixon was going to make a speech on the economy and, if so, what he was going tosay. The stock market is, at the moment, in our view, beset by a number of demons, some real and some imaginary. It is the imaginary ones, unfortunately, which get the biggest play in the news media, whereas the real ones go largely unnoticed. Some of these imaginary market worries include the following Price Controls — As noted above we have had a long series of announcements of new econ- omic game plans and they have, by this time, become old hat. The market has, in our view, by this time come to realize that the causes of inflation are deep-rooted and fundamental, and are unlikely to be solved overnight by tinkering. Watergate — That the Watergate incident will ultimately become an important part of American history is undoubted. Any attempt to relate it to the near-term course of the stock market is, we think, at best tenuous. Recession Fears — Here we are getting a bit closer to home. If a recession begins in the fourth quarter of 1973, as some economists are now forecaSting, 1974 profit estimates will no doubt have to be revised downward in the case of a number of stocks. Yet a great deal of a possible 1974 recession may already be built into the structure of stock prices, and, if the history of the relationship between past recessions and past bear markets is any guide, the present downswing will be over well before the end of any such recession and, possibly, before it even begins. While we would categorize the above factors as illusory insofar as explaining the market decline is concerned, there are a number of troubles affecting equity markets which are real, albeit they tend to have less current news value. These would include the following Public Participation — The loss of faith in the equity market by the individual investor is, by this time, well-documented, but it may well be the most important single explanation of why the market has acted as poorly as it has. Certainly it would be unrealistic to expect the stock market again to act as it did in the 1950's and 1960's without the public interest char- acteristic of that period. Interest Rates — This is at least a partial explanation of lack of public interest. The willingness of the individual investor to invest for generous income is demonstrated by the tumultuous reception given new bond funds over the past year. The stock market, meanwhile, provides substantially lONer income during a period where dividends are partially frozen. The Two-Tier Market — Lack of public interest has, in tum, created two disparate markets in which those stocks which are regularly bought by large institutions are selling at premium prices and the entire remainder of the market rests on the bargain counter. This situation is, of course, charged with instability. Illiquidity — Large concentrations of holdings in a few issues and lack of interest in the rest have created a market situation where, in general, large blocks of stock cannot be moved without violent price changes. Observation of these violent changes, of course, may have the effect of further decreasing public confidence. None of the above problems, of course, are of the sort which lend themselves to any easy solution which can be duly announced in the morning papers. Our own feeling, though, is that they are much more fundamental in explaining the stock markets malaise than a number of other more widely cited causes. Dow-Jones Industrials (1200 p.m.) 890.35 S & P Compo (1200 p.m.) 105.25 ANTHONY W. TABELL DELAFIELD, HARVEY, TABELL AWTrk No tatement or e-press,on of opinion or any other motler herem contolned 1, or IS to be deemed 10 be, directly or Indlrect'r,' on offer or the 501ICIIolion of on offer to buy or s.c1l any security referred to or mentioned The motter IS presented merely for the converlcncc of the subKnbcr Wh, e we believe the sources of our information 10 be relloble, we In no way represent or guarantee the accuracy thereof nor of the stotements mude herem Any action to be taken by the svbC(lber should be bosed on hIs own Investigation and mformahon Janney Montgomery Sco11, Inc , a a corporation, and ,Is officers or employees, moy now hove, or may later take, poslltons Of trades In respect to any seCUrttles mentioned m thiS or any future Issue, and such position may be dIfferent from any views now or hereafter expressed m thiS or ony other ISue Janney Montgomery Sco!t, Inc, which IS reglSlered With Ihe SEC a on mve!olmenl adVisor, may give adVice to Its Investment adVISOry and othel cvstomers mdependently of any stalements mode In thiS or In any other Issue Further ,nformotlOn on ony seClJllty mentioned herem IS available on request