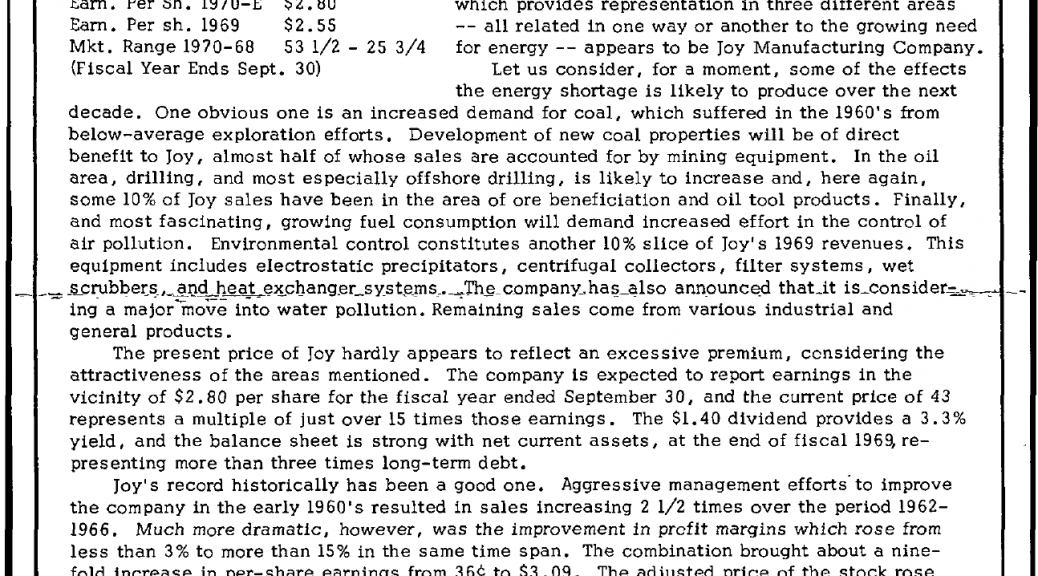 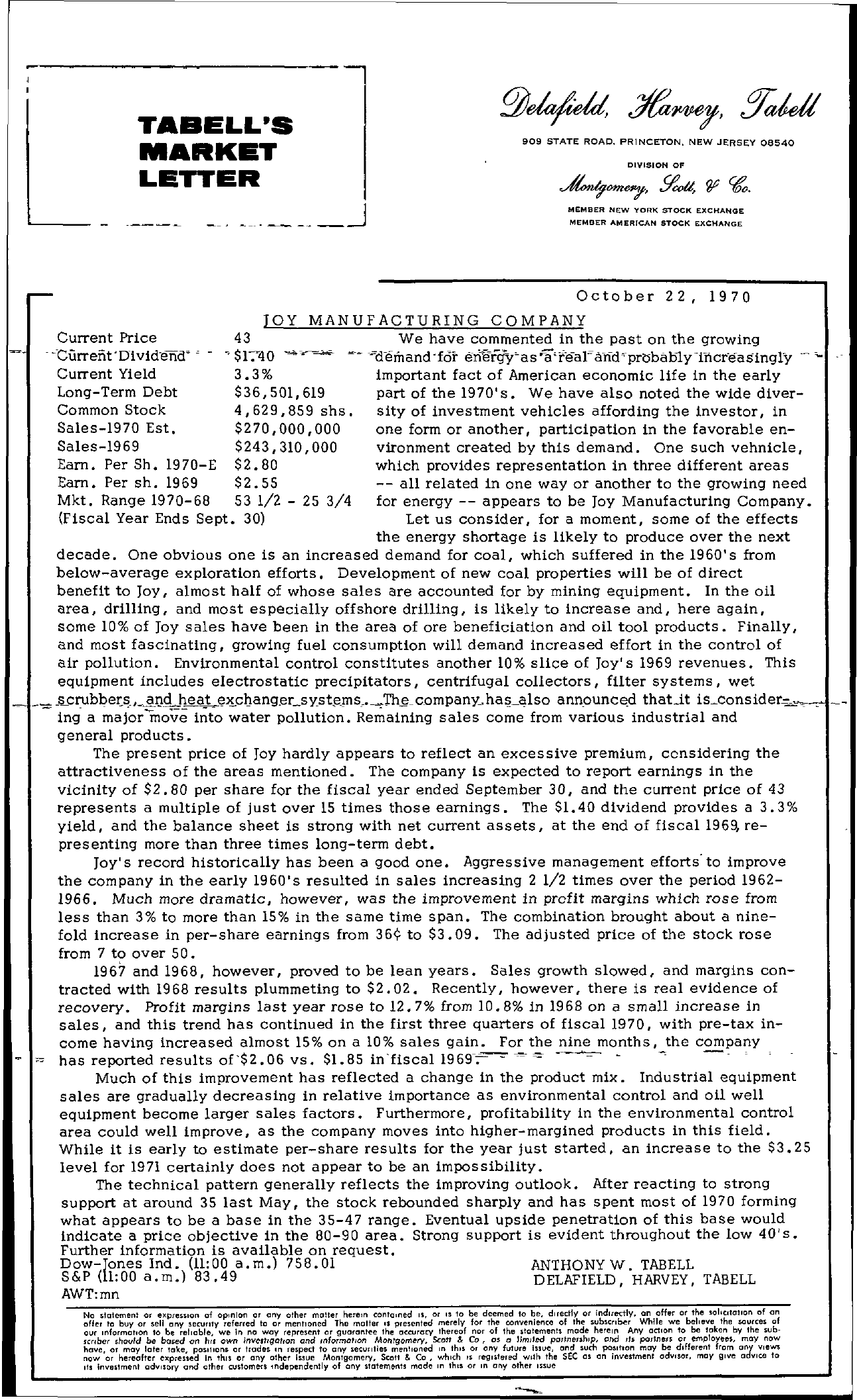 .—————————–,– TABELL'S MARKET LETTER , J 909 STATE ROAD. PRINCETON. NEW JERSEY 06540 DIVISION OF MEMBER NEW YORK STOCK EXCHANGE MEMBER AMERICAN STOCK EXCHANGE October 22, 1970 TOY MANUFACTURING COMPANY Current Price 43 We have commented in the past on the growing – -, 1-;40 -;demand'for — ' Current Yield 3.3 important fact of American economic life in the early Long-Term Debt 36,501,619 part of the 1970' s. We have also noted the wide diver- Common Stock 4,629,859 shs. sity of investment vehicles affording the investor, in Sales-1970 Est. 270,000,000 one form or another, participation in the favorable en- Sales-1969 243,310,000 vironment created by this demand. One such vehnicle, Earn. Per Sh. 1970-E 2.80 which provides representation in three different areas Earn. Per sh. 1969 2.55 — all related in one way or another to the growing need Mkt. Range 1970-68 53 1/2 – 25 3/4 for energy — appears to be Toy Manufacturing Company. (Fiscal Year Ends Sept. 30) Let us consider, for a moment, some of the effects the energy shortage is likely to produce over the next decade. One obvious one is an increased demand for coal, which suffered in the 1960's from below-average exploration efforts. Development of new coal properties will be of direct benefit to Toy, almost half of whose sales are accounted for by mining equipment. In the oil area, drilling, and most especially offshore drilling, is likely to increase and, here again, some 10 of Toy sales have been in the area of ore beneficiation and oil tool products. Finally, and most fascinating, growing fuel consumption will demand increased effort in the control of air pollution. Environmental control constitutes another 10 slice of Toy's 1969 revenues. This equipment includes electrostatic precipitators, centrifugal collectors, filter systems, wet .. Thcompanyhasalso announc.,d thaLit – – ing a maior-move water pollutio;. Remaining sales from various industrial and – general products. The present price of Toy hardly appears to reflect an excessive premium, considering the attractiveness of the areas mentioned. The company is expected to report earnings in the Vicinity of 2.80 per share for the fiscal year ended September 30, and the current price of 43 represents a multiple of Just over 15 times those earnings. The 1.40 dividend provides a 3.3 yield, and the balance sheet is strong with net current assets, at the end of fiscal 1969, re- presenting more than three times long-term debt. Toy's record historically has been a good one. Aggressive management efforts- to improve the company in the early 1960's resulted in sales increasing 2 1/2 times over the period 1962- 1966. Much more dramatic, however, was the improvement in profit margins which rose from less than 3 to more than 15 in the same time span. The combination brought about a nine- fold increase in per-share earnings from 36 to 3.09. The adjusted price of the stock rose from 7 to over 50. 1967 and 1968, however, proved to be lean years. Sales growth slowed, and margins con- tracted with 1968 results plummeting to 2.02. Recently, however, there is real evidence of recovery. Profit margins last year rose to 12.7 from 10.8 in 1968 on a small increase in sales, and this trend has continued in the first three quarters of fiscal 1970, with pre-tax in- come having increased almost 15 on a 10 sales gain. For the nine months, the company has reported results of'2.06 vs. 1.85 – – -. Much of this improvement has reflected a change in the product mix. Industrial equipment sales are gradually decreasing in relative importance as environmental control and oil well equipment become larger sales factors. Furthermore, profitability in the environmental control area could well improve, as the company moves into higher-margined products in this field. While it is early to estimate per-share results for the year just started, an increase to the 3.25 level for 1971 certainly does not appear to be an impossibility. The technical pattern generally reflects the improving outlook. After reacting to strong support at around 35 last May, the stock rebounded sharply and has spent most of 1970 forming what appears to be a base in the 35-47 range. Eventual upside penetration of this base would indicate a price objective in the 80-90 area. Strong support is eVident throughout the low 40's. Further information is available on request. Dow-Jones Ind. (1100 a.m.) 758.01 S&P (1100 a.m.) 83.49 ANTHONY W. TABELL DELAFIELD, HARVEY, TABELL AWTmn No statement or expreSSion of opmlon or any other moIler herem contained IS, or IS to be deemed to be, directly or an .offer or the soliCItation of an offer to buy or sell any security referred to or mentioned The moiler .s presented merely for the convenience of the subSCriber While we bel.eve the sources of our .nformotion to be rehoble, we In no way represent or guarantee the accuracy thereof nor of the statements made herein Any acllon to be token by the sub SCriber shovld be based on hiS own InvestigatIon and mformatlon Montgomery, ScaN 8. Co, as a llmlfed porlnenhlp, and Ih' partners or employees, may now hove Of may later toke posilions or trades .n respect to any securities mentioned In thiS or any future Inue, and such POSItion may be different from any views now 'or hereafter expres;ed In thiS or any other Issue Montgomery. Scolt & Co, whICh .s registered With the SEC as on investment adVisor, may give adVice to Its Investment adVISOry and other customers lOdependently of any statements made In th.s or In any other Issue