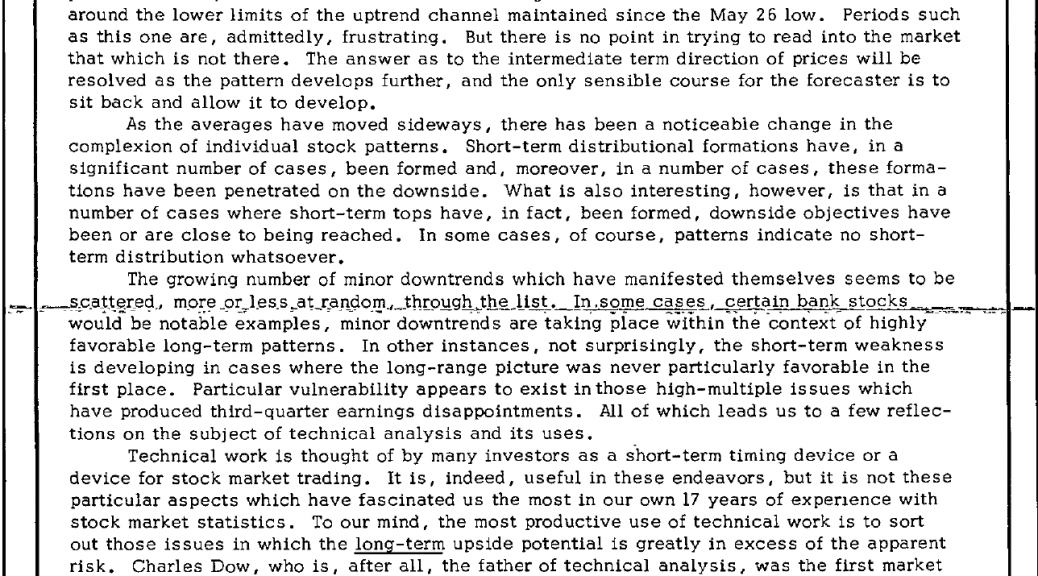 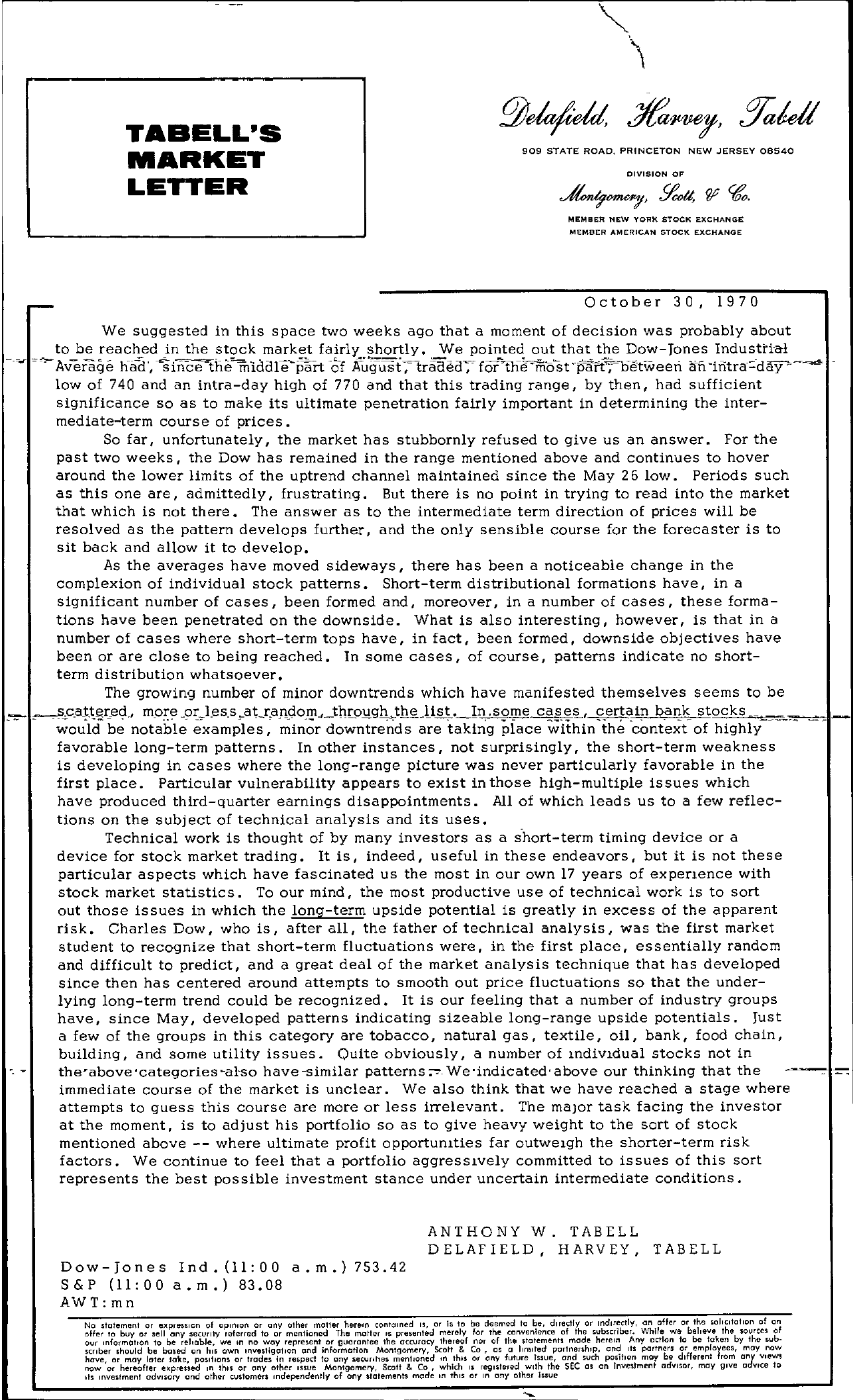 \ TABELL'S MARKET LETTER 909 STATE ROAD, PRINCETON NEW JERSEY 08540 DIVISION OF MEM6ER NEW YORK STOCK EXCHANGE MEMBER AMERICAN STOCK EXCHANGE October 30, 1970 We suggested in this space two weeks ago that a moment of decision was probably about to be reached in the stock market fairly shortly. Vie pointed out that the Dow-Jones Industrial Av-erage h-aC!', -of traaea7 for'tJ1host 'pilri';' oetweeri an -intraday'–' low of 740 and an intra-day high of 770 and that this trading range, by then, had sufficient significance so as to make its ultimate penetration fairly important in determining the inter- mediate-term course of prices. So far, unfortunately, the market has stubbornly refused to give us an answer. For the past two weeks, the Dow has remained in the range mentioned above and continues to hover around the lower limits of the uptrend channel maintained since the May 26 low. Periods such as this one are, admittedly, frustrating. But there is no point in trying to read into the market that which is not there. The answer as to the intermediate term direction of prices will be resolved as the pattern develops further, and the only sensible course for the forecaster is to sit back and allow it to develop. As the averages have moved sideways, there has been a noticeable change in the complexion of individual stock patterns. Short-term distributional formations have, in a significant number of cases, been formed and, moreover, in a number of cases, these forma- tions have been penetrated on the downside. What is also interesting, however, is that in a number of cases where short-term tops have, in fact, been formed, downside objectives have been or are close to being reached. In some cases, of course, patterns indicate no short- term distribution whatsoever. The growing number of minor downtrends which have manifested themselves seems to be s,cal1lr;ed, more orJess In, some cas es, certain bank stocks — wou'ld- be notable examples, minor downtrends are taking place within -the -ccmtext of n – favorable long-term patterns. In other instances, not surprisingly, the short-term weakness is developing in cases where the long-range picture was never particularly favorable in the first place. Particular vulnerability appears to exist in those high-multiple issues which have produced third-quarter earnings disappointments. All of which leads us to a few reflec- tions on the subject of technical analysis and its uses. Technical work is thought of by many investors as a s-hort-term timing device or a device for stock market trading. It is, indeed, useful in these endeavors, but it is not these particular aspects which have fascinated us the most in our own 17 years of expenence with stock market statistics. To our mind, the most productive use of technical work is to sort out those issues in which the long-term upside potential is greatly in excess of the apparent risk. Charles Dow, who is, after all, the father of technical analysis, was the first market student to recognize that short-term fluctuations were, in the first place, essentially random and difficult to predict, and a great deal of the market analysis technique that has developed since then has centered around attempts to smooth out price fluctuations so that the under- lying long-term trend could be recognized. It is our feeling that a number of industry groups have, since May, developed patterns indicating sizeable long-range upside potentials. Just a few of the groups in this category are tobacco, natural gas, textile, oil, bank, food chain, building, and some utility issues. Quite obviously, a number of mdivldual stocks not in the'above 'categories ai-so have -similar patterns We'indicated' above our thinking that the – immediate course of the market is unclear. We also think that we have reached a stage where attempts to guess this course are more or less irrelevant. The major task facing the investor at the moment, is to adjust his portfolio so as to give heavy weight to the sort of stock mentioned above — where ultimate profit opportunlties far outwelgh the shorter-term risk factors. We continue to feel that a portfolio aggresslvely committed to issues of this sort represents the best possible investment stance under uncertain intermediate conditions. Dow-Jones Ind.(lIOO a.m.)753.42 S & P (11 00 a. m .) 83.08 AWTmn ANTHQNY W, TAB ELL DELAFIELD, HARVEY, TAB ELL No statement or expr05s,on of opinion or Clny other matler herein contained IS, or Is to be deemed 10 be, directly or indirectly, an oHer or the soliCitation of an offer 10 buy or sell ony security referred to or mentioned The motter IS presented merely for the convenience of the subscriber. While we believe the sourct!s of our Informohon to be rehoble. we In no way represent or guarantee the accvracy thereof nor of the stotements made herein Any action to be token by the sub sCriber should be based on hiS own Investigation and information Montgomery, Scolt & Co, as a limited partnership, and Its partners or employees, may now have, or may later take, positions or trades In respect to any seCUrities mentioned In thiS or any future issue, and such po.sitlon may be different from any views now or hereafter expressed In thiS or any other Issue Montgomery. Scoll & Co, which 15 registered with the SEC as an Investment adVisor, may give adVice to liS Investment adVISOry and other customers Independently of any statements made In thiS or In any other Issue