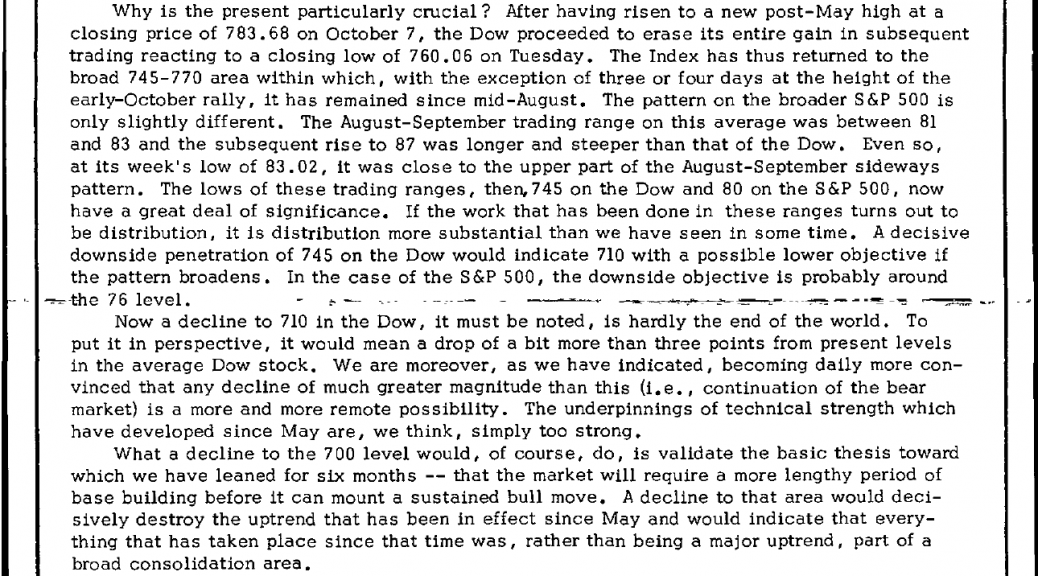 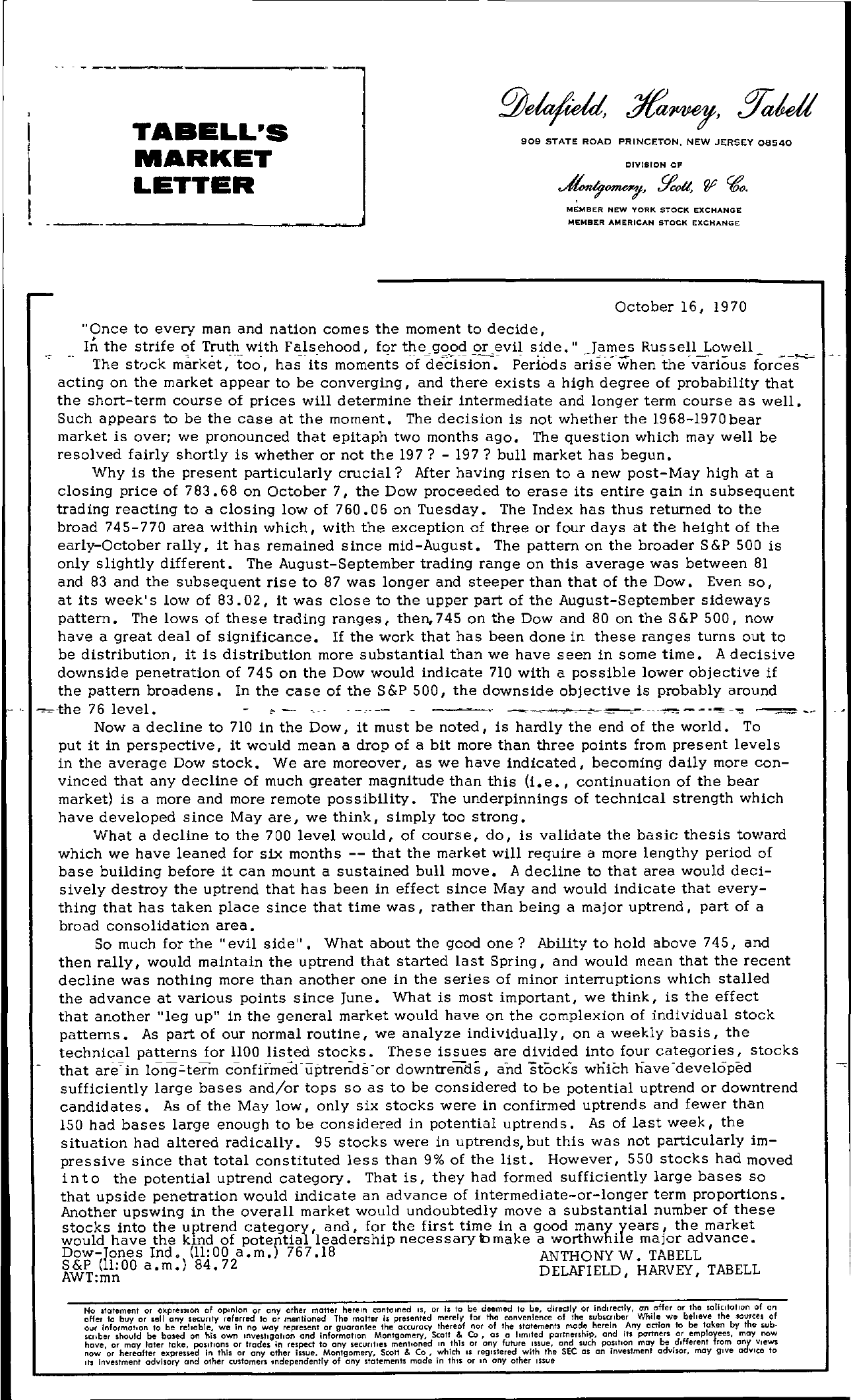 ,———————————————————- — – – – – – – – – – – – TABELL'S MARKET LETTER 909 STATE ROAD PRINCETON, NEW JERSEY 08540 DIVISION OF MEMBER NEW YORK STOCK EXCHANGE MEMBER AMERICAN STOCK EXCHANGE October 16, 1970 O, nce to every man and nation comes the moment to decide, In the strife of Truth with Falsehood, for the.good()r.evil- soi.de. James Ru-ssell L owell . The st')ck market, too, has its moments of decision. Periods arise when the various forces acting on the market appear to be converging, and there exists a high degree of probability that the short-term course of prices will determine their intermediate and longer term course as well. Such appears to be the case at the moment. The decision is not whether the 1968-1970 bear market is over; we pronounced that epitaph two months ago. The question which may well be resolved fairly shortly is whether or not the 197 – 197 bull market has begun. Why is the present particularly crucial After having risen to a new post-May high at a closing price of 783.68 on October 7, the Dow proceeded to erase its entire gain in subsequent trading reacting to a clOSing low of 760.06 on Tuesday. The Index has thus returned to the broad 745-770 area within which, with the exception of three or four days at the height of the early-October rally, it has remained since mid-August. The pattern on the broader S&P 500 is only slightly different. The August-September trading range on this average was between 81 and 83 and the subsequent rise to 87 was longer and steeper than that of the Dow. Even so, at its week's low of 83.02, it was close to the upper part of the August-September sideways pattern. The lows of these trading ranges, then, 745 on the Dow and 80 on the S&P 500, now have a great deal of significance. If the work that has been done in these ranges turns out to be distribution, it is distribution more substantial than we have seen in some time. A decisive downside penetration of 745 on the Dow would indicate 710 with a possible lower objective if the pattern broadens. In the case of the S&P 500, the downside objective is probably around 76 level. -.- – – – — — ….. …..- Now a decline to 710 in the Dow, it must be noted, is hardly the end of the world. To put it in perspective, it would mean a drop of a bit more than three points from present levels in the average Dow stock. We are moreover, as we have indicated, becoming daily more con- vinced that any decline of much greater magnitude than this (i. e., continuation of the bear market) is a more and more remote possibility. The underpinnings of technical strength which have developed since May are, we think, simply too strong. What a decline to the 700 level would, of course, do, is validate the basic thesis toward which we have leaned for six months — that the market will require a more lengthy period of base building before it can mount a sustained bull move. A decline to that area would deci- sively destroy the uptrend that has been in effect since May and would indicate that every- thing that has taken place since that time was, rather than being a major uptrend. part of a broad consolidation area. So much for the evil side. What about the good one Ability to hold above 745, and then rally, would maintain the uptrend that started last Spring, and would mean that the recent decline was nothing more than another one in the series of minor interruptions which stalled the advance at various points since June. What is most important, we think, is the effect that another leg up in the general market would have on the complexion of individual stock patterns. As part of our normal routine, we analyze individually, on a weekly basis, the technical patterns for llOO listed stocks. These issues are divided into four categories, stocks that are-in long.term confiimeciuptrendsor downtrend;;, and stocKS wnich navedeveloped sufficiently large bases and/or tops so as to be considered to be potential uptrend or downtrend candidates. As of the May low, only six stocks were in confirmed uptrends and fewer than 150 had bases large enough to be considered in potential uptrends. As of last week, the situation had altered radically. 95 stocks were in uptrends, but this was not particularly im- pressive since that total constituted less than 9 of the list. However, 550 stocks had moved in t 0 the potential uptrend category. That is, they had formed sufficiently large bases so that upside penetration would indicate an advance of intermediate-or-longer term proportions. Another upswing in the overall market would undoubtedly move a substantial number of these stocks into the uptrend category, and, for the first time in a good many years, the market would have the of poteptial leadership necessary1Dmake a worthwhile major advance. Dow-fones Ind. \1100 a.m.) 767.18 ANTHONYW. TAB ELL AS&WPT(m1n00 a.m.) 84.72 DELAFIELD ' HARVEY , TAB ELL No stafement or expression of OPInion or anv other matter herein confOlned IS, or Is to be deemed 10 be, directlv or indirectly, on .offer or the 50licltotlon of an offer to buy or sell any security referred to or mentioned The matter Is presented merely for the convenIence of the subSCflber While we believe the sources of our Information to be rehable we in no way represent or guarantee the accuracy thereof nor of the statements mode herein Any adlon to be taken by the sub- SCrIber should be bosed on his own mvest,gatlon and Information Montgomery, Scott & Co, as a limited partnership, and Its or employees, may now have, or may later take, poSitions or trades in respect to any seCUrities mentioned In this or any future lSue, and such pOSItion may be different from any views now or hereafter exprened in this or any other issue, Montgomery, Scott & Co, which IS registered wllh the SEC as on Investment adVisor, may give adVice to lIS Investment advIsory and other customers mdependently of any statements made in thiS or In any other Issue