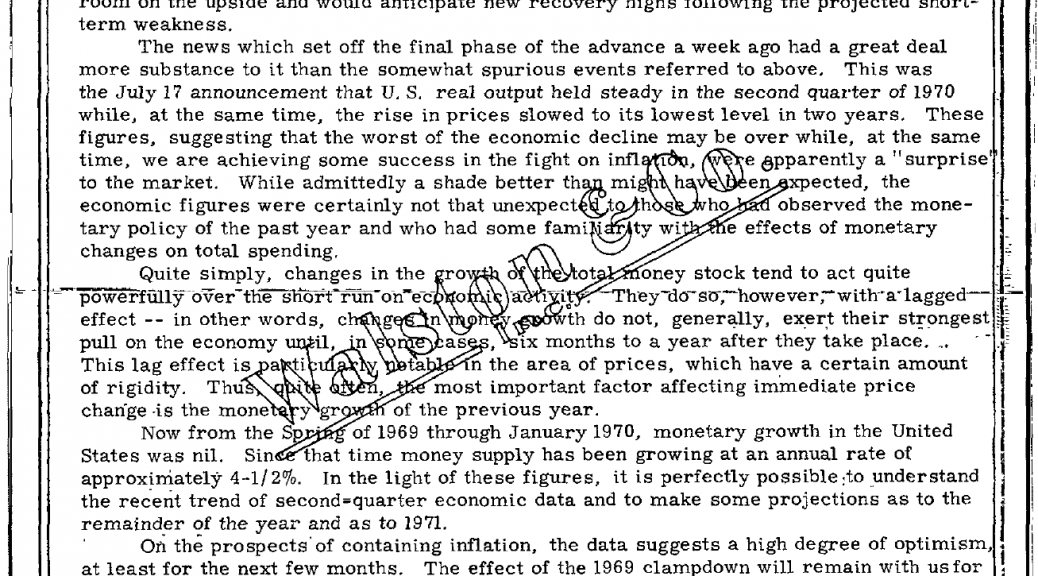 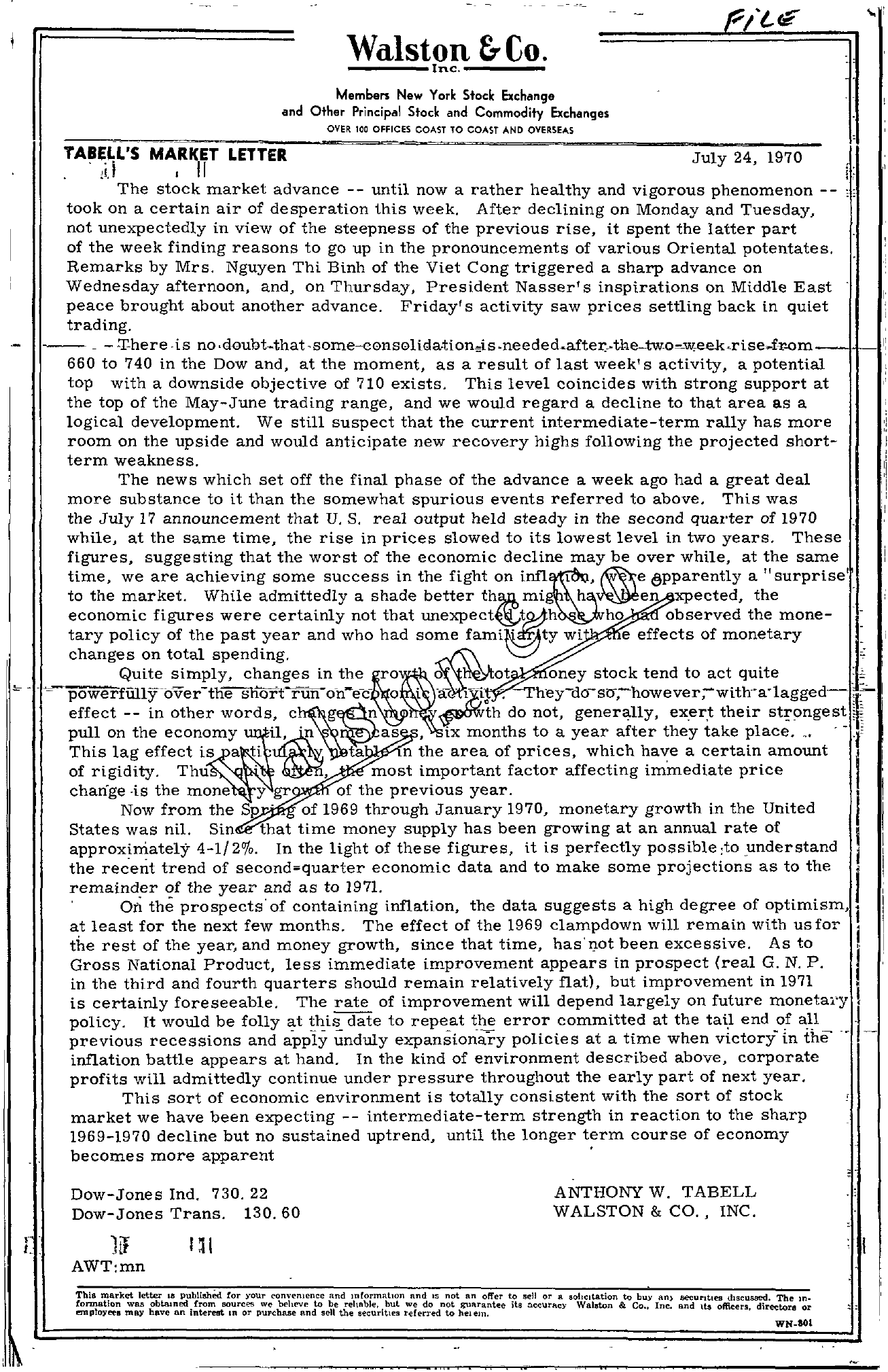 , Walston &Co. —.;..;; Inc. Members New York Stock Exchange and Other Principal Stock and Commodity Exchanges OVER 100 OFFICES COAST TO COAST AND OVERSEAS .TAB.EIiL.!L'S MARKET I II LETTER July 24, 1970 The stock market advance — until now a rather healthy and vigorous phenomenon — . took on a certain air of desperation ihis week. After declining on Monday and Tuesday, not unexpectedly in view of the steepness of the previous rise, it spent the latter part of the week finding reasons to go up in the pronouncements of various Oriental potentates. Remarks by Mrs. Nguyen Thi Binh of the Viet Cong triggered a sharp advance on Wednesday afternoon, and, on Thursday, President Nasser's inspirations on Middle East peace brought about another advance. Friday's activity saw prices settling back in quiet trading. . – !IChere -is no 660 to 740 in the Dow and, at the moment, as a result of last week's activity, a potential top with a downside objective of 710 exists. This level coincides with strong support at the top of the May-June trading range, and we would regard a decline to that area as a logical development. We still suspect that the current intermediate-term rally has more room on the upside and would anticipate new recovery highs following the projected short- term weakness. The news which set off the final phase of the advance a week ago had a great deal more substance to it than the somewhat spurious events referred to above. This was the July 17 announcement that U. S. real output held steady in the second quarter of 1970 ., while, at the same time, the rise in prices slowed to its lowest level in two years. These figures, suggesting that the worst of the economic decline may be over while, at the same time, we are achieving some success in the fight on I!!Pparently a surprise' to the market. While admittedly a shade better thm,mi h xpected, the economic figures were certainly not that ho observed the mone- . tary policy of the past year and who had some famiNcr.t;\ty wi e effects of monetary changes on total spending. '.;/ Quite simply, changes in the – powerfUll!' over-tne snort run on-e-c' a i at oney stock tend to act quite 'a'lagged- I effect — III other words, pull on the economy u This lag effect is a ti 'n ta do not, generally, exer,t thelr st!,ongest I, ix months to a year after they take place… – – .J n the area of prices, which have a certain amount of rigidity. Thu . change -is the mone y gr ,most important factor affecting immediate price of the previous year. I Now from the S of 1969 through January 1970, monetary growth in the United States was nil. Sin that time money supply has been growing at an annual rate of I approximately 4-1/2'70. In the light of these figures, it is perfectly possible ,to understand the recent trend of economic data and to make some projections as to the , Iremainder of the year and as to 1971. . On the prospects' of containing inflation, the data suggests a high degree of optimism, !at least for the next few months, The effect of the 1969 clampdown will remain with us for the rest of the year, and money growth, since that time, has' not been excessive. As to Gross National Product, less immediate improvement appears in prospect (real G. N. P. in the third and fourth quarters should remain relatively flat), but improvement in 1971 I,. I is certainly foreseeable. The rate of improvement will depend largely on future monetalY , policy. It would be folly at this date to repeat the error committed at the tai.l end of all -I previous recessions and apply unduly expansionary policies at a time when victory' in the -, – inflation battle appears at hand, In the kind of environment described above, corporate profits will admittedly continue under pressure throughout the early part of next year. This sort of economic environment is totally consistent with the sort of stock market we have been expecting — intermediate-term strength in reaction to the sharp 1969-1970 decline but no sustained uptrend, until the longer term course of economy becomes more apparent . Dow-Jones Ind. 730. 22 Dow-Jones Trans. 130.60 L. LJ I JI AWTmn ANTHONY W. TABELL WALSTON & CO., INC. This market letter III for yOUr convenience and mformatlOn and IS not an offer to sell or a soliCitation to buy an) diSCussed. The in- formation was obtained. (rom sources we behE'Ve to hi! reliable. but we do not guarantee its nccuracy Walston & Co Inc. and lts officers. direetora or employees may have an mterest In or purchase and sell the securltles referred to helem. WNIOI ;!