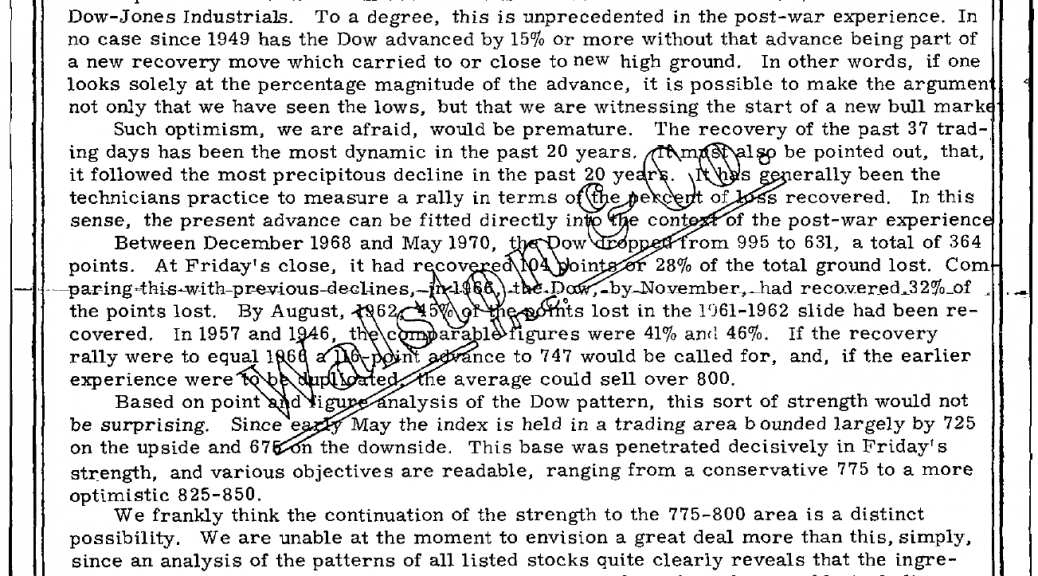 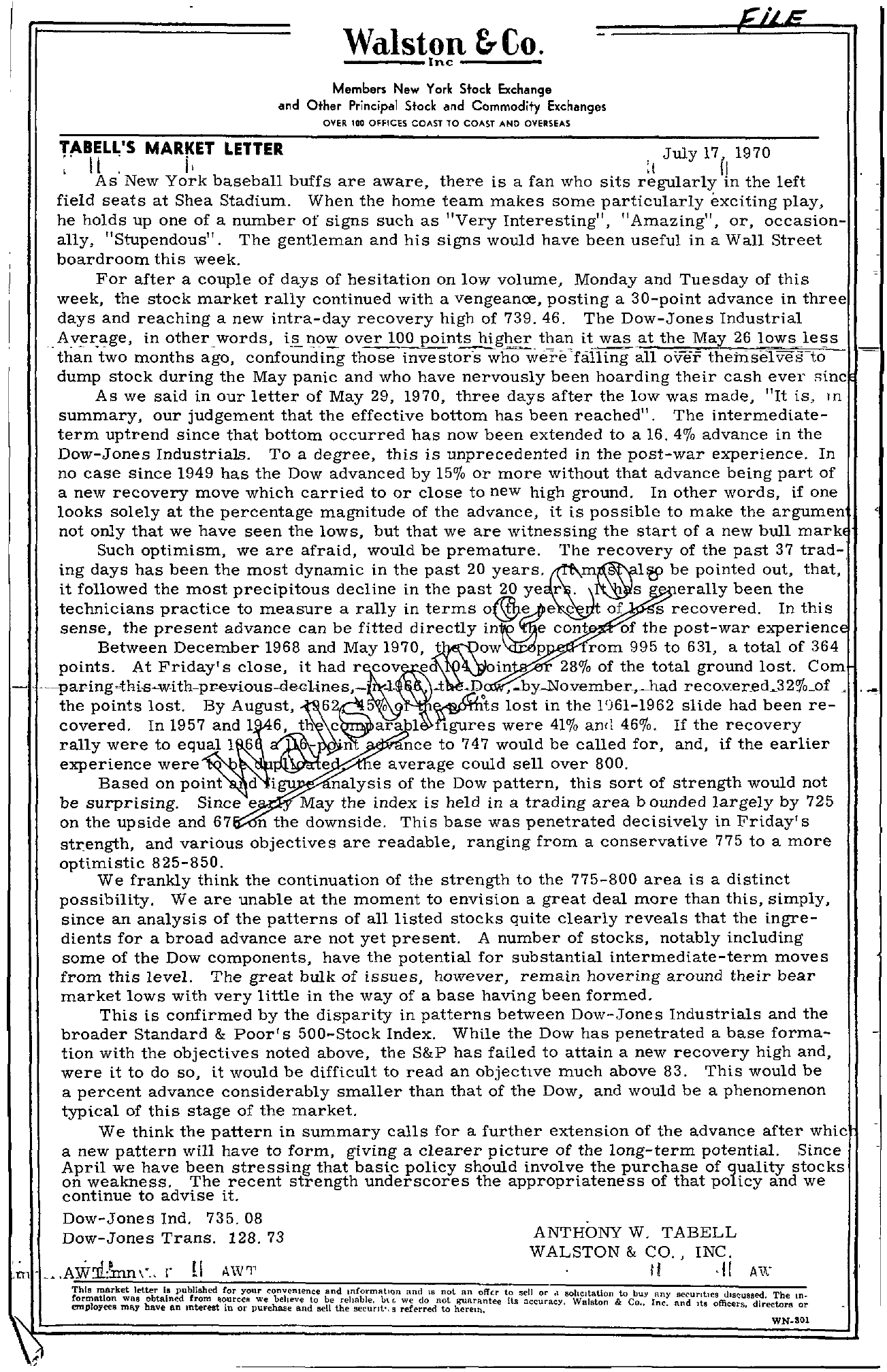 Walston &Co. Members New York Stock Exchange and Other Principal Stock and Commodity Exchanges OVER 100 OFFICES COAST TO COAST AND OVERSEAS MARrET LETTER 1 July 17(11970 As New York baseball buffs are aware, there is a fan who sits regularly in the left field seats at Shea Stadium. When the home team makes some particularly exciting play, he holds up one of a number of signs such as Very Interesting, Amazing, or, occasion- ally, Stupendous. The gentleman and his signs would have been useful in a Wall Street boardroom this week. For after a couple of days of hesitation on low volume, Monday and Tuesday of this week, the stock market rally continued with a vengeance, posting a 30-point advance in three days and reaching a new intra-day recovery high of 739.46. The Dow-Jones Industrial Average, in other words, is now over 100 pOints higher than it was at the May 26 lows less thai.two months ago, those investor;-who wereCfalling all over theiriselvei;-to dump stock during the May panic and who have nervously been hoarding their cash ever Rinc As we said in our letter of May 29, 1970, three days after the low was made, It is, 1ll summary, our judgement that the effective bottom has been reached. The intermediate- term uptrend since that bottom occurred has now been extended to a 16. 4 advance in the Dow-Jones Industrials. To a degree, this is unprecedented in the post-war experience. In no case since 1949 has the Dow advanced by 15 or more without that advance being part of a new recovery move which carried to or close to new high ground. In other words, if one looks solely at the percentage magnitude of the advance, it is possible to make the argumen not only that we have seen the lows, but that we are witnessing the start of a new bull mark Such optimism, we are afraid, would be premature. The recovery of the past 37 trad-' ing days has been the most dynamic in the past 20 be pOinted out, that,' it followed the most precipitous decline in the past 20 ye r. erally been the technicians practice to measure a rally in terms e c of s recovered. In this sense, the present advance can be fitted directly in e cont of the post-war experienc Between December 1968 and May 1970, p r o m 995 to 631, a total of 364 points. At Friday's close, it had in 28 of the total ground lost. Com t ,by-November,had , the points lost. By August, 0 lost in the 1')61-1962 slide had been re- covered. In 1957 and 1 6, tH c ara 1 Ftirures were 41 and 46. If the recovery rally were to equal 1 6 'n nce to 747 would be called for, and, if the earlier experience were e e average could sell over 800. Based on point d igg nalysis of the Dow pattern, this sort of strength would not be surprising. Since e May the index is held in a trading area bounded largely by 725 on the upside and 67 n the downside. This base was penetrated decisively in Friday's strength, and various objectives are readable, ranging from a conservative 775 to a more optimistic 825-850. We frankly think the continuation of the strength to the 775-800 area is a distinct possibility. We are unable at the moment to envision a great deal more than this, simply, since an analysis of the patterns of all listed stocks quite clearly reveals that the ingre- dients for a broad advance are not yet present. A number of stocks, notably including some of the Dow components, have the potential for substantial intermediate-term moves from this leveL The great bulk of issues, however, remain hovering around their bear market lows with very little in the way of a base having been formed. This is confirmed by the disparity in patterns between Dow-Jones Industrials and the broader Standard & Poor's 500-Stock Index. While the Dow has penetrated a base forma- tion with the objectives noted above, the S&P has failed to attain a new recovery high and, were it to do so, it would be difficult to read an objective much above 83. This would be a percent advance considerably smaller than that of the Dow, and would be a phenomenon typical of this stage of the market. We think the pattern in summary calls for a further extension of the advance after whic a new pattern will have to form, giving a clearer picture of the long-term potentiaL Since April we have been stressing that basic policy should involve the purchase of quality stocks on weakness. The recent strength underscores the appropriateness of that policy and we continue to advise it. Dow-Jones Ind. 735.08 Dow-Jones Trans. 128. 73 . ANTHONY W. TABELL WALSTON & CO., INC. II 11 This market letter III published for your convenience nnd Informnt1(m and 18 not nIl offer to sell or ,\ sohcltation to buy nny 8e('UrltJes ..hs ed Th formation was obtained from li!ourCeA we believe to be rellable. hi we do not guarantee employees may have an mterest in or pUFchase and sell the secunt., s refErrerl to hereal, its accuracy . Walston & Co .. I nco d nn t 1S ffi 0 ceerUs,99dl ,e rectors In or WNSOl