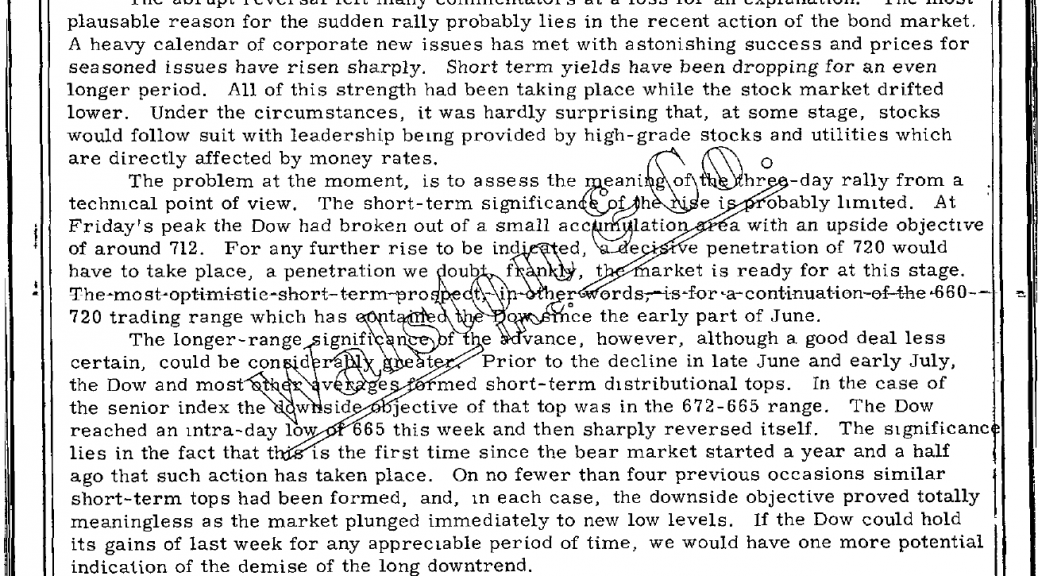 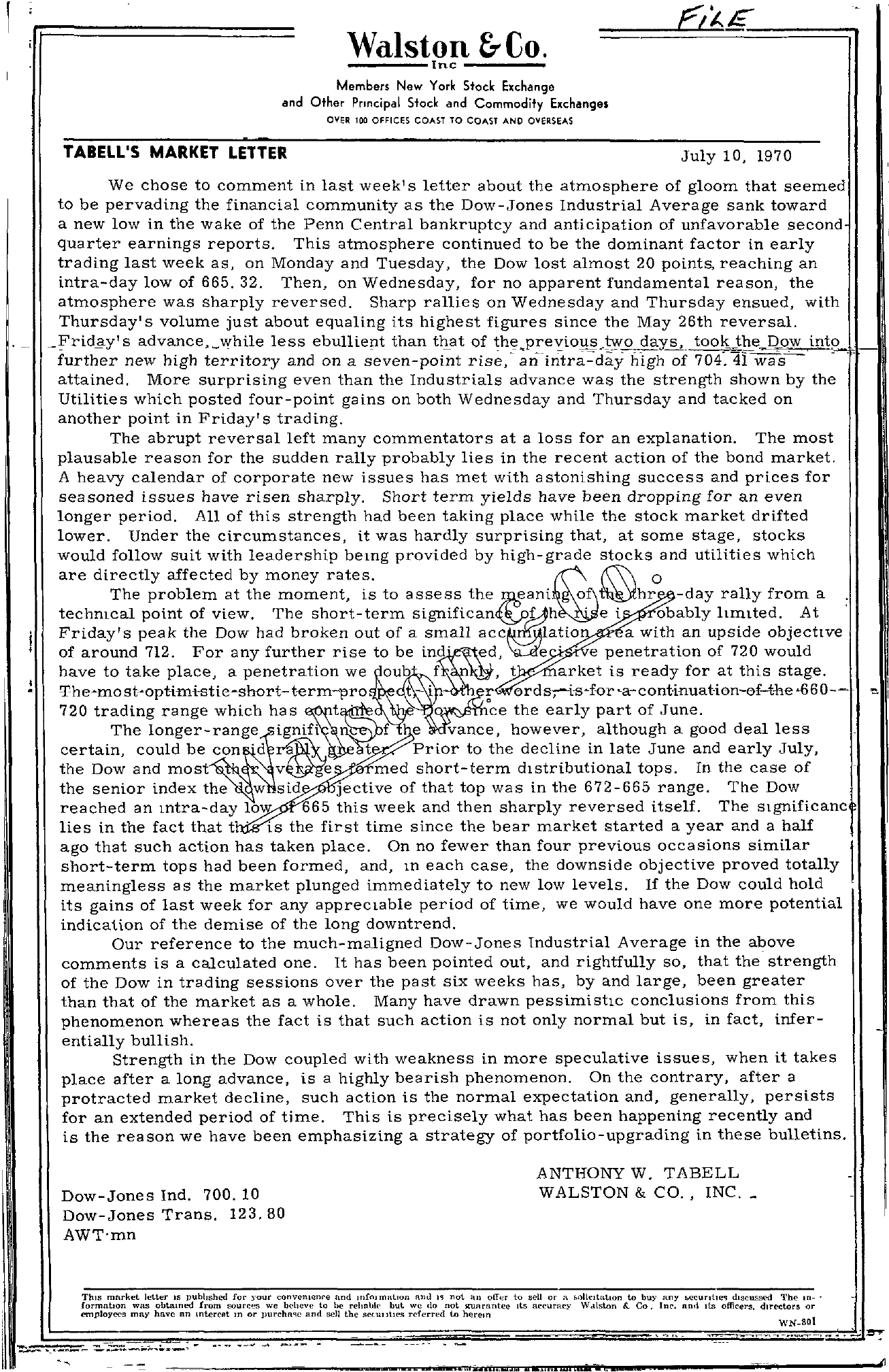 Wdlston &Co. —–Inc —– Members New York Stock Exchange and Other Principal Stock and Commodity Exchange. OVER 100 OFFICES COAST TO COAST AND OVERSEAS TABEll'S MARKET lETTER July 10, 1970 We chose to comment in last week's letter about the atmosphere of gloom that seemed to be pervading the financial community as the Dow-Jones Industrial Average sank toward a new low in the wake of the Penn Central bankruptcy and anticipation of unfavorable second quarter earnings reports. This atmosphere continued to be the dominant factor in early trading last week as, on Monday and Tuesday, the Dow lost almost 20 points, reaching an intra-day low of 665. 32. Then, on Wednesday, for no apparent fundamental reason, the atmosphere was sharply reversed. Sharp rallies on Wednesday and Thursday ensued, with Thursday's volume just about equaling its highest figures since the May 26th reversal. Fridg.y's advance,while less ebullient than that of the,previous,1vo days, took theDow into fUrther new high territory and on a seven-point rise,' an-intra.day high of 704-.41 wa's- . -,. attained. More surprising even than the Industrials advance was the strength shown by the Utilities which posted four-point gains on both Wednesday and Thursday and tacked on another point in Friday's trading. The abrupt reversal left many commentators at a loss for an explanation. The most plausable reason for the sudden rally probably lies in the recent action of the bond market. A heavy calendar of corporate new issues has met with astonishing success and prices for seasoned issues have risen sharply. Short term yields have been dropping for an even longer period. All of this strength had been taking place while the stock market drifted lower. Under the circumstances, it was hardly surprising that, at some stage, stocks would follow suit with leadership bemg provided by high-grade stocks and utilities which are directly affected by money rates. The problem at the moment, is to assess the JPt,eani of 0 -day rally from a techmcal point of view. The short-term . e i obably hmlted. At Friday's peak the Dow had broken out of a small a with an upside objecttve of around 712. For any further rise to be ed, \Ld'e' e penetration of 720 would ., have to take place, a penetration t arket is ready for at this stage. r't – i ords;–isfor ca-cont-inuat-ion-of-the c660– ' 1 720 trading range which has The longer-range ignifl ce the early part of June. f e vance, however, although a good deal less certain, could be con 'd t Prior to the decline in late June and early July, the Dow and most med short-term dlstributional tops. In the case of the senior index the w sid jective of that top was in the 672-665 range. The Dow reached an mtra-day low 665 this week and then sharply reversed itself. The slgnificanc lies in the fact that t' is the first time since the bear market started a year and a half ago that such action has taken place. On no fewer than four previous occasions similar 1 short-term tops had been formed, and, m each case, the downSide objective proved totally meaningless as the market plunged immediately to new low levels. If the Dow could hold . its gains of last week for any appreclable period of time, we would have one more potential indication of the demise of the long downtrend. Our reference to the much-maligned DOW-Jones Industrial Average in the above comments is a calculated one. It has been pointed out, and rightfully so, that the strength of the Dow in trading sessions over the past six weeks has, by and large, been greater than that of the market as a whole. Many have drawn pessimishc conclusions from this phenomenon whereas the fact is that such action is not only normal but is, in fact, infer- entially bullish. Strength in the Dow coupled with weakness in more speculative issues, when it takes place after a long advance, is a highly bearish phenomenon. On the contrary, after a protracted market decline, such action is the normal expectation and, generally, persists for an extended period of time. This is precisely what has been happening recently and is the reason we have been emphasizing a strategy of portfolio-upgrading in these bulletins. Dow-Jones Ind. 700. 10 Dow-Jones Trans. 123.80 AWT'mn ANTHONY W. TABELL WALSTON & CO., INC. ThIS mnrket letter IS puhlJshcd for your convc-nlenre and mfolmHllOll Rnd not ofTer to sell or a hollcltutLOIl to buy any dIscussed The 11l- – formatIon was obtained from sources we behe-ve to be reilnlJlr but we do not iO).J.rantee Its Walston IJ. Co. In(', and Its officers. directors or employE!s may have an mtercet In or purchR'IC and sell the SC(Ullties referred to herem WNsol … -..,; ;ilinliinraiJM ml,ilI1DiCaiu a-a