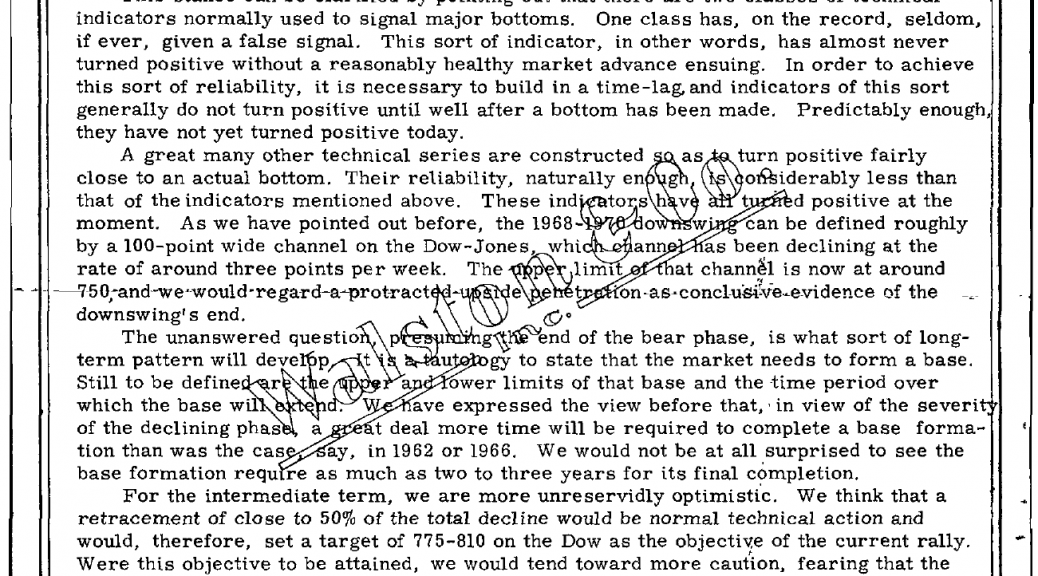 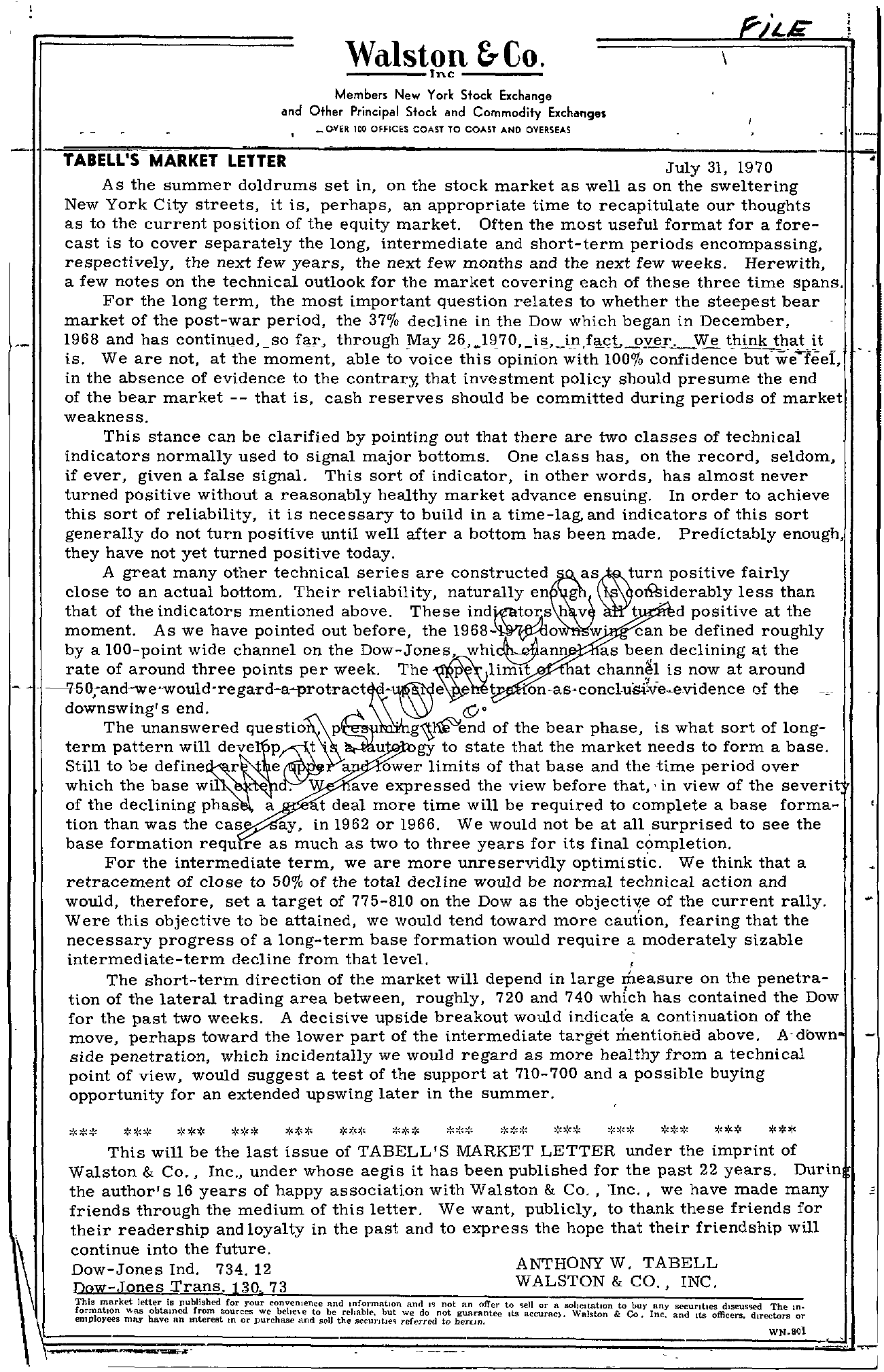 Walston 5- Co. Inc Members New York Stock Exchange and Other Principal Stock and Commodity Exchange. OVER 100 OffiCES COAST TO COAST AND OVERSe….S \ TABELL'S MARKET LETTER July 31, 1970 As the summer doldrums set in, on the stock market as well as on the sweltering New York City streets, it is, perhaps, an appropriate time to recapitulate our thoughts as to the current position of the equity market. Often the most useful format for a fore- cast is to cover separately the long, intermediate and short-term periods encompassing, respectively, the next few years, the next few months and the next few weeks. Herewith, a few notes on the technical outlook for the market covering each of these three time spans. For the long term, the most important question relates to whether the steepest bear market of the post-war period, the 370/0 decline in the Dow which began in December, 1968 and has continued,so far, through May thinUhatit is. We are not, at the moment, able to voice this opinion with 1000/0 confidence in the absence of evidence to the contrary, that investment policy should presume the end of the bear market — that is, cash reserves should be committed during periods of market weakness. This stance can be clarified by pointing out that there are two classes of technical indicators normally used to signal major bottoms. One class has, on the record, seldom, if ever, given a false signal. This sort of indicator, in other words, has almost never turned positive without a reasonably healthy market advance ensuing. In order to achieve this sort of reliability, it is necessary to build in a time-lag, and indicators of this sort generally do not turn positive until well after a bottom has been made. Predictably enough they have not yet turned positive today. A great many other technical series are close to an actual bottom. Their reliability, naturally en g positive fairly less than that of the indicators mentioned above. These hv positive at the moment. As we have pOinted out before, the w' can be defined roughly by a 100-point wide channel on the Dow-Jones, whiyann as declining at the rate of around three pOints per week. The — Sidownswing's end. W The unanswered . at channel is now at around . of the — yo of the bear phase, is what sort of long- term pattern will Still to be define which the base wi! u gy to state that the market needs to form a base. a ower limits of that base and the -time period over . ave expressed the view before that,' in view of the severit of the declining t deal more time will be required to complete a base forma- tion than was the cas ay, in 1962 or 1966. We would not be at all surprised to see the base formation requ re as much as two to three years for its final completion. For the intermediate term, we are more unreservidly optimistic. We think that a retracement of close to 500/0 of the total decline would be normal technical action and would, therefore, set a target of 775-810 on the Dow as the objecth(e of the current rally. Were this objective to be attained, we would tend toward more caution, fearing that the necessary progress of a long-term base formation would require a moderately sizable intermediate-term decline from that level. , The short-term direction of the market will depend in large m, easure on the penetra- tion of the lateral trading area between, roughly, 720 and 740 which has contained the Dow for the past two weeks. A decisive upside breakout would indicate a continuation of the move, perhaps toward the lower part of the intermediate target mentioned above. A-dbwno side penetration, which inCidentally we would regard as more healthy from a technical point of view, would suggest a test of the support at 710-700 and a possible buying opportunity for an extended upswing later in the summer. This will be the last issue of TABELL'S MARKET LETTER under the imprint of Walston & Co., Inc., under whose aegis it has been published for the past 22 years. Durin the author's 16 years of happy association with Walston & Co. , Inc., we have made many friends through the medium of this letter. We want, publicly, to thank these friends for their readership and loyalty in the past and to express the hope that their friendship will continue into the future. Dow-Jones Ind. 734.12 Dow-Jones Trans. 130- 73 ANTHONY W. TABELL WALSTON & CO., INC. This market letter is Jlublished for your convemence Il.nd InformatIOn and l'l not an oller to ;ell or a soliCitatIOn to buy lIny secuntles dlscus;ed The In. formation v.as obtamed from !;ources we hebe,,!.' to be reliable-. but we do not gUarante-e Its aeeurac. Walston & Co. Inc. and Its officers. directors or employees mllY have an mterest In or lJurchase find sell the to benln. …. ;r-