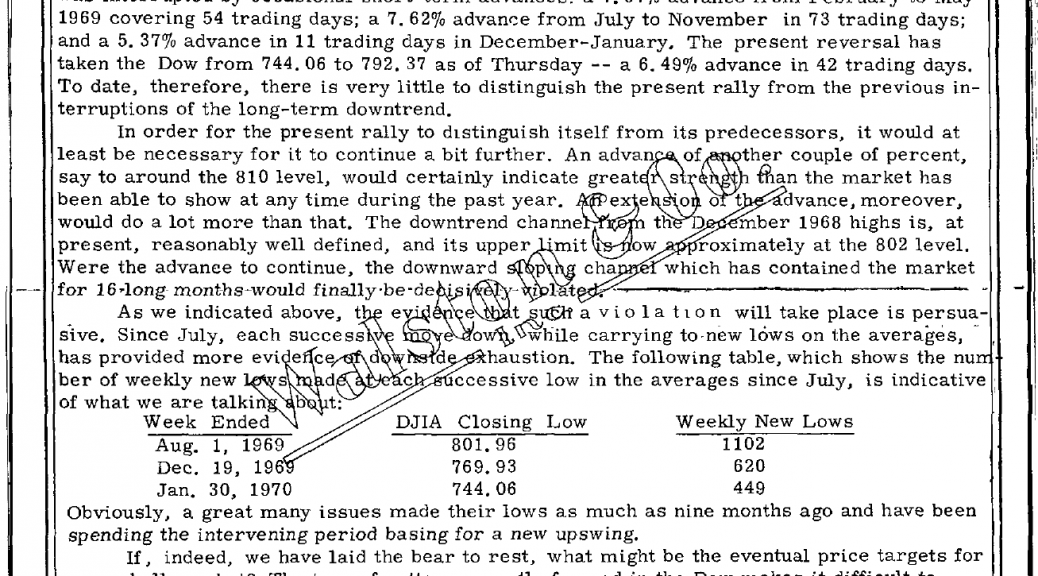 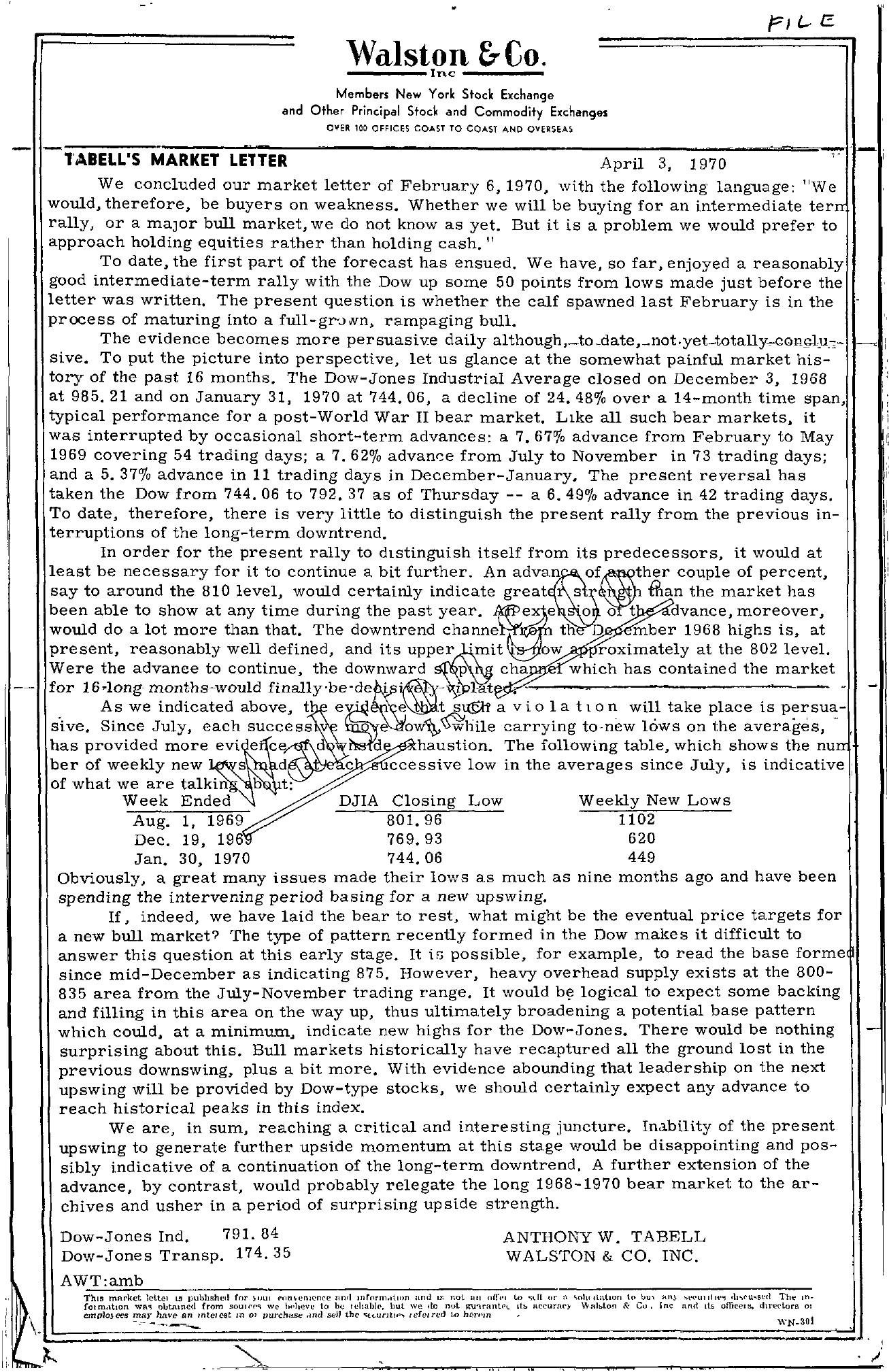 Walston &Co. —–lnc —– Members New York Stock Exchange and Other Principal Stock and Commodity Exchange. OVER 100 OFFICES COAST TO COAST AND l'ABELL'S MARKET LEtTER April 3, 1970 We concluded our market letter of February 6,1970, with the following language We would, therefore, be buyers on weakness. Whether we will be buying for an intermediate ter rally, or a major bull market, we do not know as yet. But it is a problem we would prefer to approach holding equities rather than holding cash. To date, the first part of the forecast has ensued. We have, so far, enjoyed a reasonably good intermediate-term rally with the Dow up some 50 points from lows made just before the letter was written. The present question is whether the calf spawned last February is in the process of maturing into a full-gr'J.vn, rampaging bull. The evidence becomes more persuasive daily sive. To put the picture into perspective, let us glance at the somewhat painful market his- tory of the past 16 months. The Dow-Jones Industrial Average closed on December 3, 1968 at 985.21 and on January 31, 1970 at 744.06, a decline of 24.480/0 over a 14-month time span, typical performance for a post-World War II bear market. Llke all such bear markets, it was interrupted by occasional short-term advances a 7.670/0 advance from February to May 1969 covering 54 trading days; a 7. 620/0 from July to November in 73 trading days; and a 5. 370/0 advance in 11 trading days in December-January. The present reversal has taken the Dow from 744.06 to 792. 37 as of Thursday — a 6.490/0 advance in 42 trading days. To date, therefore, there is very little to distinguish the present rally from the previous in- terruptions of the long-term downtrend. In order for the present rally to dlstinguish itself from its predecessors, it would at least be necessary for it to continue a bit further. An say to around the 810 level, would certainly indicate great s couple of percent, than the market has been able to show at any time during the past year. l/(fPae '0 0 t dvance, moreover, would do a lot more than that. The downtrend t1i mber 1968 highs is, at present, reasonably well defined, and its Were the advance to continue, the downward , — for 16long 'mit ow roximately at the 802 level. p cha which has contained the market I It; , – — As we indicated evS e\..hJ;t s'ive. Since July, each success e a vi 0 1 a t 1 0 n will take place is carrying to-new lows on the averages, – , has provided more evi e ce CI haustion. The following table, which shows the nu ber of weekly new s d c ccessive low in the averages since July, is indicative of what we are talkin ll t Week Ended DJIA Closing Low Weekly New Lows Aug. 1, 1969 801. 96 1102 Dec. 19, 196 769.93 620 Jan. 30, 1970 744.06 449 Obviously, a great many issues made their lows as much as nine months ago and have been spending the intervening period basing for a new upswing. If, indeed, we have laid the bear to rest, what might be the eventual price targets for a new bull market The type of pattern recently formed in the Dow makes it difficult to answer this question at this early stage. It is possible, for example, to read the base forme since mid-December as indicating 875. However, heavy overhead supply exists at the 800- 835 area from the July-November trading range. It would logical to expect some backing and filling in this area on the way up, thus ultima.tely broadening a potential base pattern which could, at a minimum, indicate new highs for the Dow-Jones. There would be nothing surprising about this. Bull markets historically have recaptured all the ground lost in the previous downswing, plus a bit more. With evidEonce abounding that leadership on the next upswing will be provided by Dow-type stocks, we should certainly expect any advance to reach historical peaks in this index. We are, in sum, reaching a critical and interesting juncture. Inability of the present upswing to generate further upside momentum at this stage would be disappointing and pos- sibly indicative of a continuation of the long-term downtrend. A further extension of the advance, by contrast, would probably relegate the long 1968-1970 bear market to the ar- chives and usher in a period of surprising upside strength. Dow-Jones Ind. 791. 84 Dow-Jones Transp. 174.35 ANTHONY W. TABELL WALSTON & CO. INC. AWTamb ThIS mnrket Jette! L9 Jlubhshc,l for IJUI nn, Infnrm.,tlOJl lind 1.'1 not 1111 If, I… (01' II ,nhtatlOn to UU\ fOlm,ltLon wao; obtmned from souu'; we \,h'!Vl' to he IchabI', but we ,10 nut gu,\ranlp,- Lh. aecurm') \\tllh,ton & Cu, Inc and Its emploet's mn)' hlwe 1m mtelcst m OJ In!rchusl;' ,md sell the wfe/red to hT'm ,h ..ru-.sed The Lndlredors 01 WN301 I' 11 I' I! .