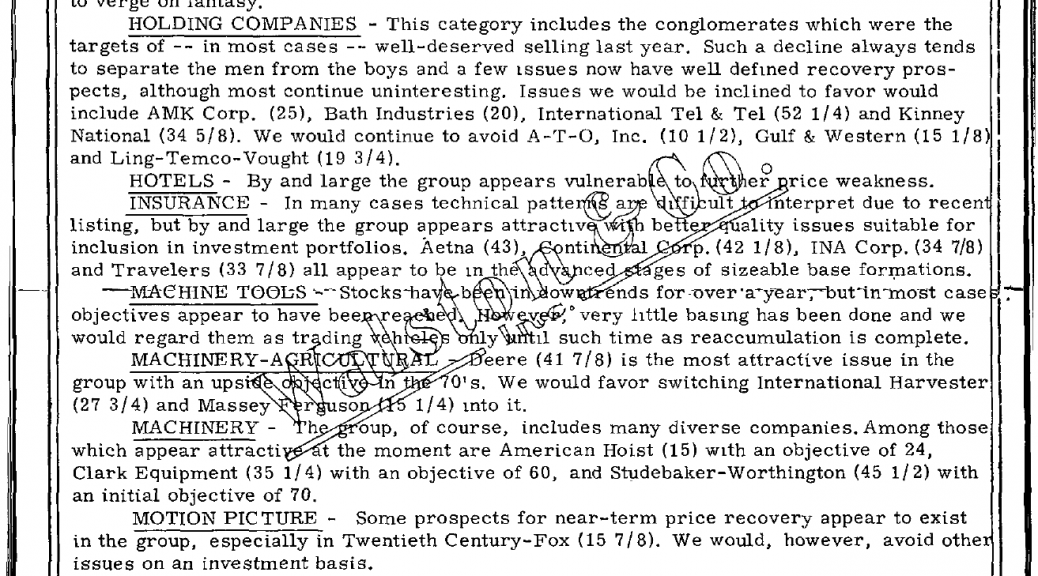 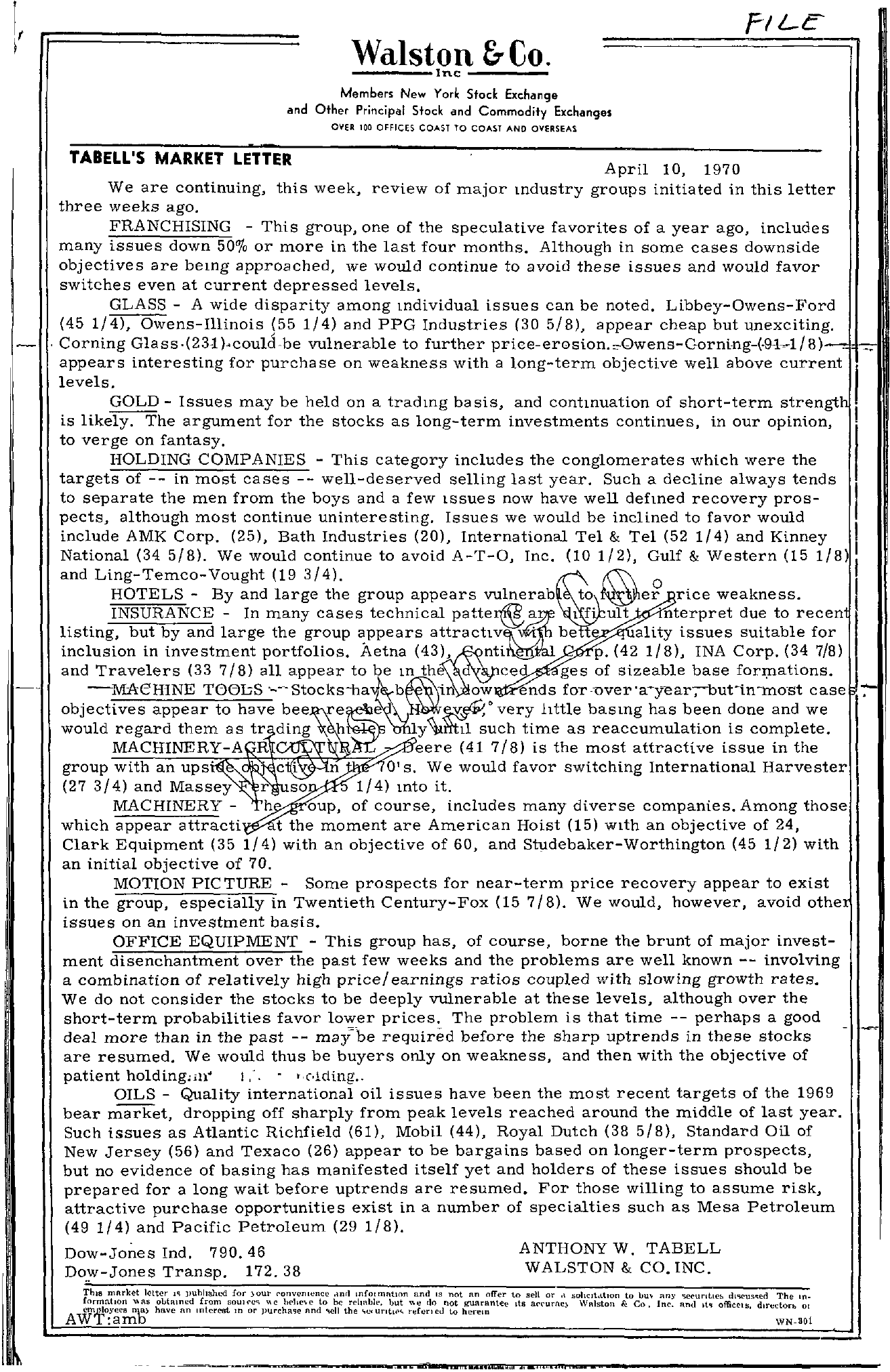 1, FILe Walston & Co. —-Inc —– Members New York Stock Exchange and Other Principal Stock and Commodity Exchange. OYER 100 OFFICES COAST TO COAST AND OVERSEAS TABEll'S MARKET lETTER April 10, 1970 We are continuing, this week, review of major mdustry groups initiated in this letter three weeks ago. FRANCHISING – This group, one of the speculative favorites of a year ago, includes many issues down 50 or more in the last four months. Although in some cases downside objectives are bemg approached, we would continue to avoid these issues and would favor switches even at current depressed levels. GLASS – A wide disparity among mdividual issues can be noted. Libbey-Owens-Ford (45 1/4), Owens-Illinois (55 1/4) and PPG Industries (30 5/8), appear cheap but unexciting. . Corning Glass .(231 ).coul(Lbe vulnerable to further / 8) appears interesting for purchase on weakness with a long-term objective well above current levels. GOLD – Issues may be held on a tradmg basis, and contmuation of short-term strengt is likely. The argument for the stocks as long-term investments continues, in our opinion, to verge on fantasy. HOLDING COMPANIES – This category includes the conglomerates which were the targets of — in most cases — well-deserved selling last year. Such a decline always tends to separate the men from the boys and a few lssues now have well defmed recovery pros- pects, although most continue uninteresting. Issues we would be inclined to favor would !include AMK Corp. (25), Bath Industries (20), International Tel & Tel (52 1/ 4) and Kinney INational (34 5/8). We would continue to avoid A-T-O, Inc. (101/2), Gulf & Western (15 1/8) and Ling-Temco-Vought (19 3/4). HOTELS – By and large the group appears vulnerab to INSURANCE – In many cases technical 1 f ult 0 rice weakness. I 'nterpret due to recen I listing, but by and large the group appears attrachv . be e ality issues suitable for inclusion in investment portfolios. Aetna nti 1 p. (42 1/8), INA Corp. (34 7/S) and Travelers (33 7/S) all appear to be m the ce ges of sizeable base forJ7lations. -MAeHINE T00GS – ow ends fOT-uver'a-year-;-buttn-mo-st case – objectives appear to have bee very httle basmg has been done and we would regard them as tr ding h y\tlt'j'i such time as reaccumulation is complete. MACHlNERY-A R eere (41 7/8) is the most attractive issue in the group with an ups' 0' s. We would favor switching International Harvester (273/4) and Massey 1/4) mto it. MACHIl\TERY – oup, of course, includes many diverse companies. Among those which appear attracti t the moment are American Hoist (15) wlth an objective of 24, Clark Equipment (35 1/4) with an objective of 60, and Studebaker-Worthington (45 1/2) with an initial objective of 70. MOTION PIC TURE – Some prospects for near-term price recovery appear to exist in the group, especially in Twentieth Century-Fox (15 7/S). We WOuld, however, avoid othe issues on an investment basis. OFFICE EQUIPMENT – This group has, of course, borne the brunt of major invest- ment disenchantment over the past few weeks and the problems are well known — involving a combination of relatively high price/ earnings ratios coupled with slowing growth rates. We do not consider the stocks to be deeply vulnerable at these levels, although over the short-term probabilities favor lower prices. The problem is that time — perhaps a good deal more than in the past — maybe required before the sharp uptrends in these stocks are resumed. We would thus be buyers only on weakness, and then with the objective of patient holding,m' I.' ',elding.. OILS – Quality international oil issues have been the most recent targets of the 1969 bear market, dropping off sharply from peak levels reached around the middle of last year. Such issues as Atlantic Richfield (61), Mobil (44), Royal Dutch (3S 5/S), Standard Oil of New Jersey (56) and Texaco (26) appear to be bargains based on longer-term prospects, but no evidence of basing has manifested itself yet and holders of these issues should be prepared for a long wait before uptrends are resumed. For those willing to assume risk, attractive purchase opportunities exist in a number of specialties such as Mesa Petroleum (49 1/4) and Pacific Petroleum (29 l/S). Dow-Jones Ind. 790.46 Dow-Jones Transp. 172. 38 ANTHONY W. TABELL WALSTON & CO. INC. ThiS mnrket letter 1'1 mhhshcd for )our C'onventence ,mrl mfolml\tlon and IS not an offer to sell or ,\ soliclt,ltlOn to an)' ')C'unLte! ,jL'lcuso;cd The In- (ormnhon '\\1\8 obtluncd from SOUlI'C'l \\C 1.(l\c\c to bc rellahle. but 'H! do not guarllntee Its WRiston & Co. Inc. l,nd offieNs, dlrccf.Qrb 01 L'fn.JZ!0YCl'S n,a) have nn mterest In or nnd 'lei I the untll'' refcrl ed f.Q herem AWTamO WN-30! . ,'.1 …..m..n,a ),1 i i ….