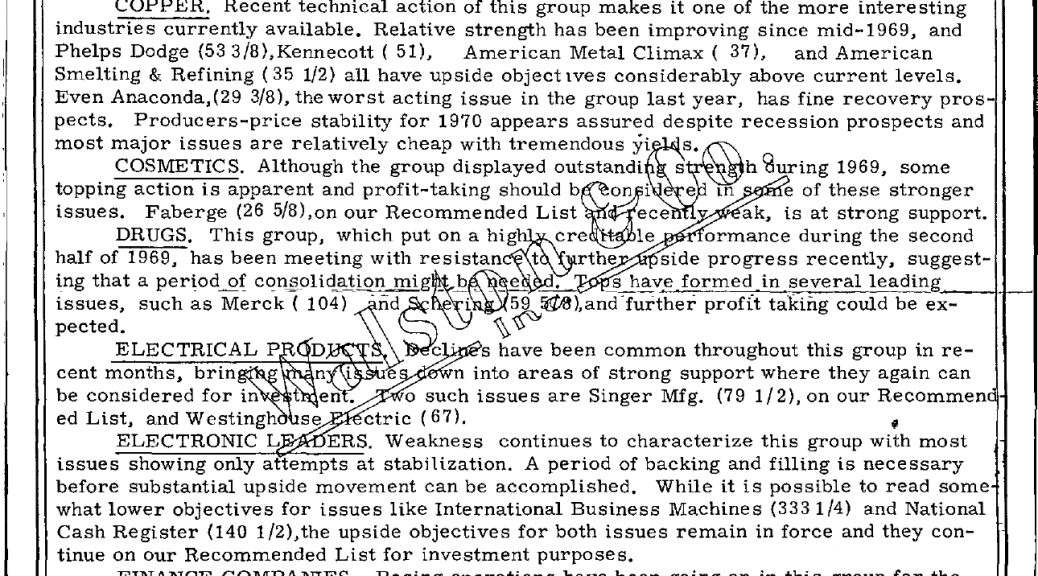 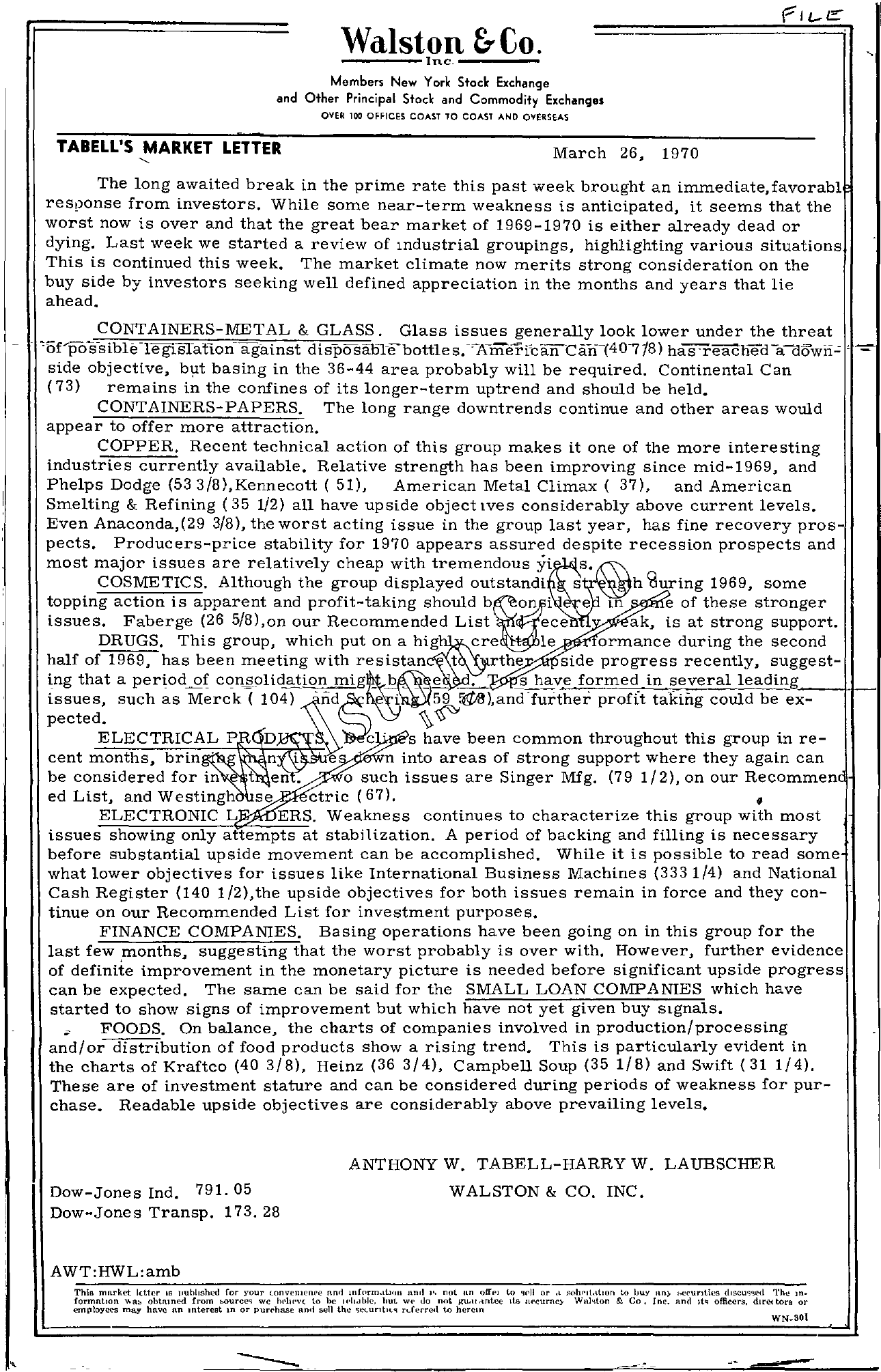 Walston &Co. Inc. Members New York Stock Exchange and Other Principal Stock and Commodity Exchanges O …. ER 100 OFFICES COAST TO COAST AND OVERSEAS TABELL'S MARKET LETTER '- March 26, 1970 The long awaited break in the prime rate this past week brought an immediate,favorabl res)onse from investors. While some near-term weakness is anticipated, it seems that the worst now is over and that the great bear market of 1969-1970 is either already dead or dying. Last week we started a review of mdustrial groupings, highlighting various situations This is continued this week. The market climate now merits strong consideration on the buy side by investors seeking well defined appreciation in the months and years that lie ahead. CONTAINERS-l\IIETAL & GLASS. Glass issues generally look lower under the threat . '5f/pOEfsible-legiSlatlon- against CiinI40-71S) has-reaclieira-down'- side objective, b\lt basing in the 36-44 area probably will be required. Continental Can (73) remains in the confines of its longer-term uptrend and should be held. CONTAINERS-PAPERS. The long range downtrends continue and other areas would appear to offer more attraction. COPPER. Recent technical action of this group makes it one of the more interesting industries currently available. Relative strength has been improving since mid-1969, and Phelps Dodge (53 3/S),Kennecott (51), American Metal Climax (37), and American Smelting & Refining (35 1/2) all have upside object ives considerably above current levels. Even Anaconda,(29 3/S), the worst acting issue in the group last year, has fine recovery pros- pects. Producers-price stability for 1970 appears assured despite recession prospects and most major issues are relatively cheap with tremendous yi COSl\IIETICS. Although the group displayed outstandi s h guring 1969, some topping action is apparent and profit-taking should bani e m e of these stronger issues. Faberge (26 5/S),on our Recommended List ece ak, is at strong support. DRUGS. This group, which put on a Ie ormance during the second half of 1969, has been meeting with resistan t rthe side progress recently, suggest- ing that a period…Qf con.olidation .. Jl.-!Jave formed in several leading issues, such as Merck ( 104) pected. m),andfurther proflt taking could be ex- ;, ELECTRICAL P D c s have been common throughout this group in re- cent months, brin . ie n into areas of strong support where they again can be considered for in 0 such issues are Singer Mfg. (79 1/2), on our Recommen ed List, and Westingh se ctric (67). f ELECTRONIC L ERS. Weakness continues to characterize this group with most issues showing only attempts at stabilization. A period of backing and filling is necessary before substantial upside movement can be accomplished. While it is possible to read some what lower objectives for issues like International Business Machines (3331/4) and National Cash Register (140 1/2),the upside objectives for both issues remain in force and they con- tinue on our Recommended List for investment purposes. FINANCE COMPANIES. Basing operations have been going on in this group for the last few months, suggesting that the worst probably is over with. However, further evidence of definite improvement in the monetary picture is needed before significant upside progress can be expected. The same can be said for the SMALL LOAN COMPANIES which have started to show signs of improvement but which have not yet given buy Signals. ., FOODS. On balance, the charts of companies involved in production/processing and/or distribution of food products show a rising trend. This is particularly evident in the charts of Kraftco (40 3/S), Heinz (36 3/4), Campbell Soup (35 l/S) and Swift (31 1/4). These are of investment stature and can be considered during periods of weakness for pur- chase. Readable upside objectives are considerably above prevailing levels. DOW-Jones Ind. 791. 05 Dow-Jones Transp. 173. 2S ANTHONY W. TABELL-HARRY W. LAUBSCHER WALSTON & CO. INC. AWTHWLamb This mnrkct kttcr IS iJuhllsh …d (or your lonvcmenrc nnri Inform.lt)(JII uwl not all otri'l to or ,\ ROliILltzon to buy 1111) l'Ccuntics The m- formatIOn ohtluned from we Iwill'\'( to he ijll.Jhle, hut W(' do not JnMItntee Its lll'eUn'lC) Wnhton & Co, Inc. and It'! officers, dlrC(tors or employees may hnvc nn mtereot In or pun-hase Im,j the o;c.untl.1 r.ferrei to herem WN.sOI