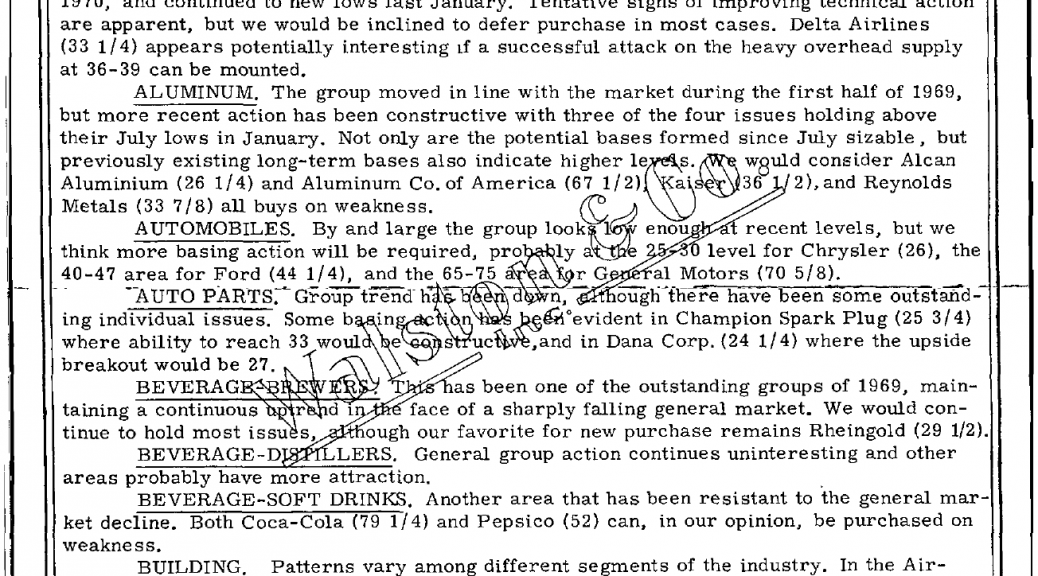 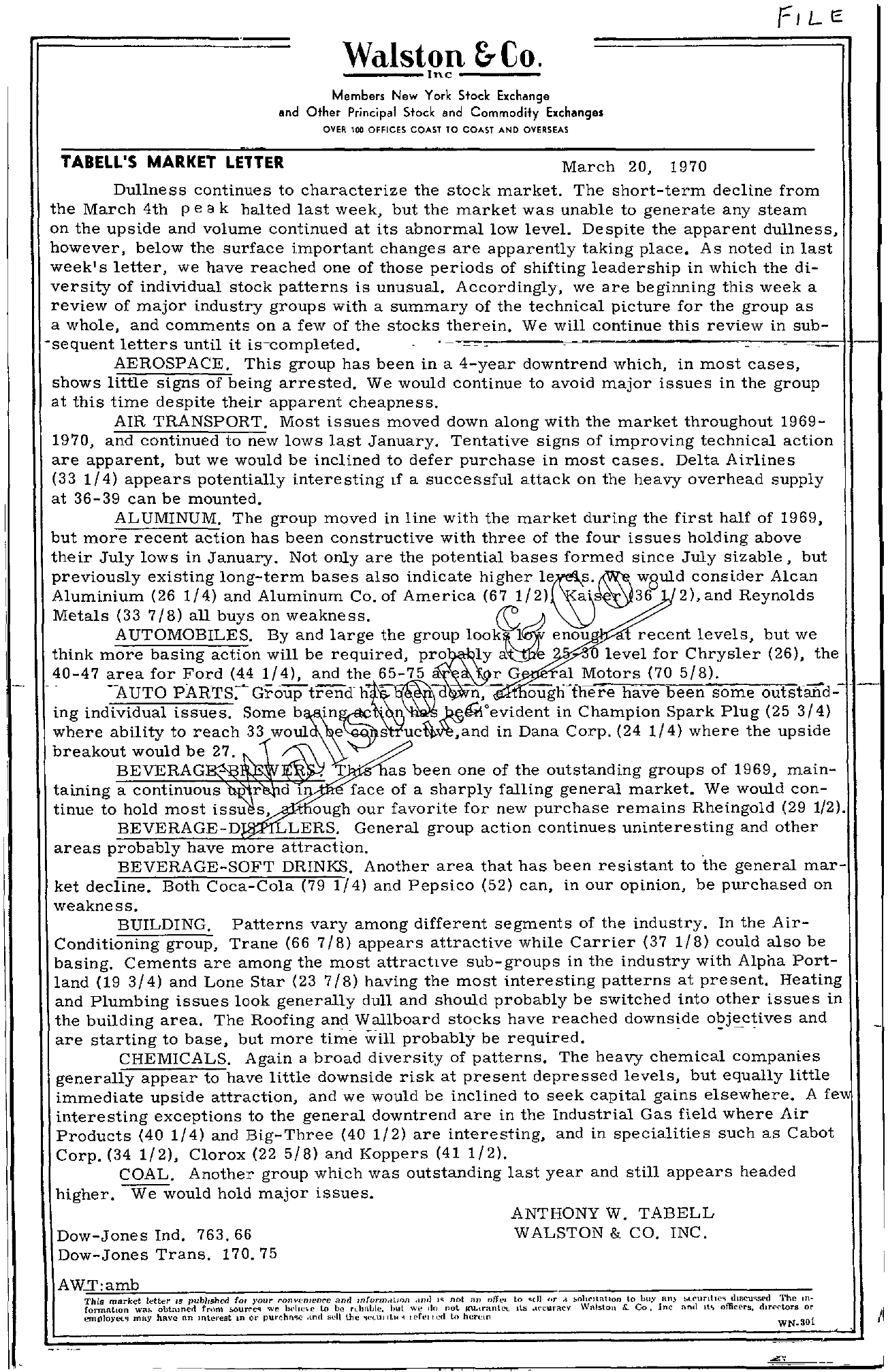 Walston &- Co. Inc Members New York Stock Exchange and Other Principal Stock and Commodity Exchange. OVER 100 OFFICES COAST TO COAST AND OVERSEAS TABELL'S MARKET LETTER March 20, 1970 Dullness continues to characterize the stock market. The short-term decline from the March 4th pea k halted last week, but the market was unable to generate any steam on the upside and volume continued at its abnormal low level. Despite the apparent dullness, however, below the surface important changes are apparently taking place. As noted in last week's letter, we have reached one of those periods of shifting leadership in which the di- versity of individual stock patterns is unusual. Accordingly, we are beginning this week a review of major industry groups with a summary of the technical picture for the group as a whole, and comments on a few of the stocks therein. We will continue this review in sub- -sequent letters until it is-completed. . AEROSPACE. This group has been in a 4-year downtrend which, in most cases, shows little signs of being arrested. We would continue to avoid major issues in the group at this time despite their apparent cheapness. AIR TRANSPORT. Most issues moved down along with the market throughout 19691970, and continued to new lows last January. Tentative signs of improving technical action are apparent, but we would be inclined to defer purchase in most cases. Delta Airlines (33 1/4) appears potentially interesting if a successful attack on the heavy overhead supply at 36-39 can be mounted. ALUMINUM. The group moved in line with the market during the first half of 1969, but more recent action has been constructive with three of the four issues holding above their July lows in January. Not only are the potential bases formed since July sizable, but previously existing long-term bases also indicate higher f!lA w8uld consider Alcan Aluminium (261/4) and Aluminum Co. of America (67 1/2) 2),and Reynolds Metals (33 7/8) all buys on weakness. AUTOMOBILES. By and large the group look l enou recent levels, but we think more basing action will be required, 40-47 area for Ford (44 1/4), and the 65-75 a .. -AUTO ae level for Chrysler (26), the r G al Motors (705/8). OiigJ1-fl1ere have been some outsfafid ing individual issues. Some where ability to reach 33 woul e s in Champion Spark Plug (253/4) in Dana Corp. (24 1/ 4) where the upside breakout would be 27. BEVERAG – . ' as been one of the outstanding groups of 1969, main- taining a continuous r d 1 face of a sharply falling general market. We would con- tinue to hold most issu s, ough our favorite for new purchase remains Rheingold (29 1/2). BEVERAGE-D LERS. General group action continues uninteresting and other areas probably have more attraction. BEVERAGE-SOFT DRINKS. Another area that has been resistant to the general mar- ket decline. Both Coca-Cola (79 1/4) and Pepsico (52) can, in our opinion, be purchased on weakness. BUILDING. Patterns vary among different segments of the industry. In the Air- Conditioning group, Trane (66 7/8) appears attractive while Carrier (37 1/8) could also be basing. Cements are among the most attractive sub-groups in the industry with Alpha Port- land (19 3/4) and Lone Star (23 7/8) having the most interesting patterns at present. Heating and Plumbing issues look generally dull and should probably be switched into other issues in willthe building area. The Roofing and Wallboard stocks have reached downside are starting to base, but more time probably be required. – — and CHEMICALS. Again a broad diversity of patterns. The heavy chemical companies generally appear to have little downside risk at present depressed levels, but equally little immediate upside attraction, and we would be inclined to seek capital gains elsewhere. A fe interesting exceptions to the general downtrend are in the Industrial Gas field where Air Products (40 1/4) and Big-Three (40 1/2) are interesting, and in specialities such as Cabot Corp. (34 1/2), Clorox (225/8) and Koppers (41 1/2). COAL. Another group which was outstanding last year and still appears headed higher. We would hold major issues. Dow-Jones Ind. 763.66 Dow-Jones Trans. 170.75 ANTHONY W. TABELL WALSTON & CO. INC. AWTamb This market letter IS published fO/ )'Qur f'OnVelHNllC .and mformUf)D ,mIl ); not Jln ITt tv ell or …. .oht'llatlon to buy Jill) dlscu;5'd The in formatIOn obtaIned fr,)m &ourt't.1 we to be hut we ,10 not gu rantC't. Its .Ircuracv Wl\lston s… Co. Inc lntl It., officers. dlr(''wrs or entOloye'l mny have An Interest In or purehn'lc ,mil sL'll the Itl I eft'J t .(1 t6 hCrCltl — II