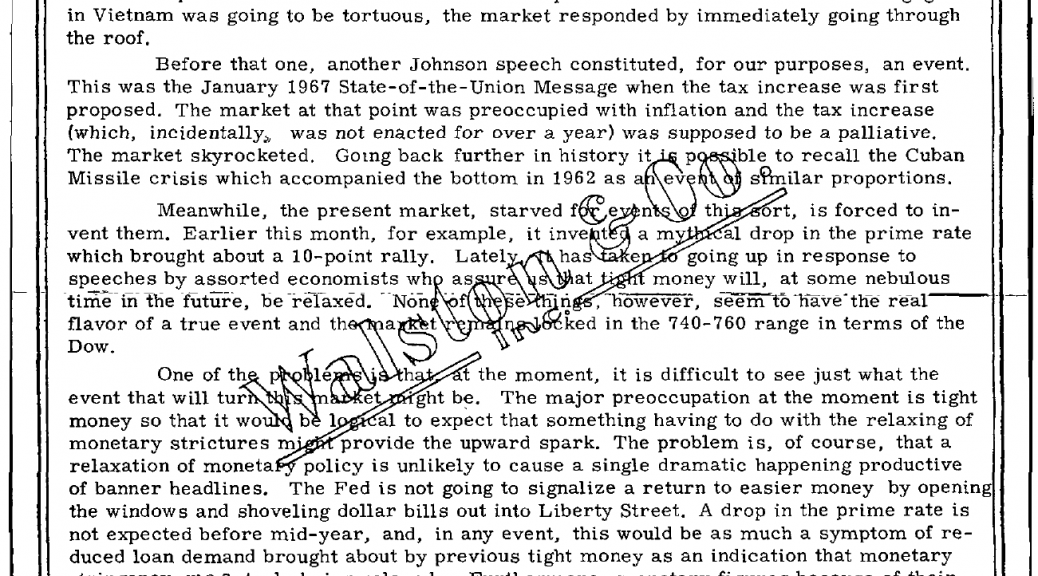 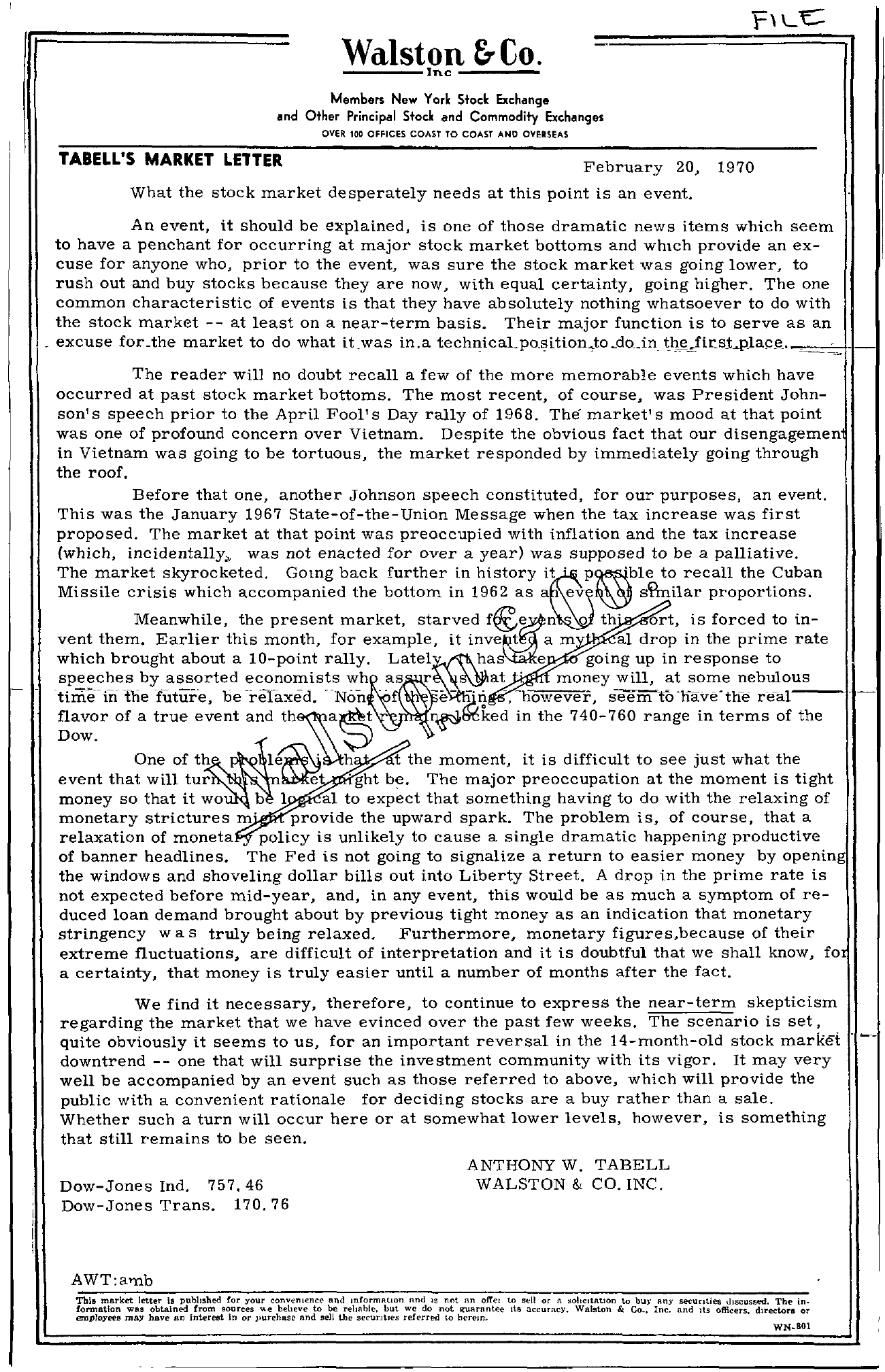 Walston &Co. —–Inc —– Members New York Stock Exchange and Other Principal Stock and Commodity Exchange. OVER 100 OFFICES COAST TO COAST AND O't'ERSEAS TABEll'S MARKET lETTER February 20, What the stock market desperately needs at this point is an event. 1970 An event, it should be explained, is one of those dramatic news items which seem to have a penchant for occurring at major stock market bottoms and WhiCh provide an ex- cuse for anyone who, prior to the event, was sure the stock market was going lower, to rush out and buy stocks because they are now, with equal certainty, going higher. The one common characteristic of events is that they have absolutely nothing whatsoever to do with the stock market — at least on a near-term basis. Their major function is to serve as an excuse for.the market to do what it was in.a the-firsLplace ……– The reader will no doubt recall a few of the more memorable events which have occurred at past stock market bottoms. The most recent, of course, was President John- son's speech prior to the April Fool's Day rally of 1968. The market's mood at that point was one of profound concern over Vietnam. Despite the obvious fact that our disengagemen in Vietnam was going to be tortuous, the market responded by immediately going through the roof. Before that one, another Johnson speech constituted, for our purposes, an event. This was the January 1967 State-of-the-Union Message when the tax increase was first proposed. The market at that point was preoccupied with inflation and the tax increase (which, incidentally was not enacted for over a year) was supposed to be a palliative. The market skyrocketed. Gomg back further in history Missile crisis which accompanied the bottom in 1962 as ev to recall the Cuban sltnilar proportions. Meanwhile, the present market, starved 0 thO ort, is forced to in- vent them. Earlier this month, for example, it a m al drop in the prime rate which brought about a 10-point rally. Latel has\taite going up in response to speeches by assorted economists wh as r at' money will, at some nebulous –1 Dow. One of th h t the moment, it is difficult to see just what the event that will tur ght be. The major preoccupation at the moment is tight money so that it wo b 1 al to expect that somethmg havmg to do with the relaxmg of monetary strictures m' provide the upward spark. The problem is, of course, that a relaxation of moneta policy is unlikely to cause a single dramatic happening productive of banner headlines. The Fed is not going to signalize a return to easier money by opening the windows and shoveling dollar bills out into Liberty Street. A drop in the prime rate is not expected before mid-year, and, in any event, this would be as much a symptom of re- duced loan demand brought about by previous tight money as an indication that monetary stringency was truly being relaxed. Furthermore, monetary figures,because of their extreme fluctuations, are difficult of interpretation and it is doubtful that we shall know, fo a certainty, that money is truly easier until a number of months after the fact. We find it necessary, therefore, to continue to express the near-term skepticism regarding the market that we have evinced over the past few weeks. The scenario is set, quite obviously it seems to us, for an important reversal in the 14-month-old stock market downtrend — one that will surprise the investment community with its vigor. It may very well be accompanied by an event such as those referred to above, which will provide the public with a convenient rationale for deciding stocks are a buy rather than a sale. Whether such a turn will occur here or at somewhat lower levels, however, is something that still remains to be seen. Dow-Jones Ind. 757.46 Dow-Jones Trans. 170.76 ANTHONY W. TABELL WALSTON & CO. INC. AWTa'Ub This market letter Is published for your convenience and mfOMnntLOJ'l Rnd IS not an offel to SI.'U or R soliCitatIOn to buy Rny secunllefl uiscussed. The In. formation was obtained from sources …. e hf.'heve to be rehable, but we do not KURrnntee Its nccumcy. Walston & Co., Inc. and Its officers. directors or employees may have an Interest in or J)urchase and sell the SC!.'Ufllus to herein,