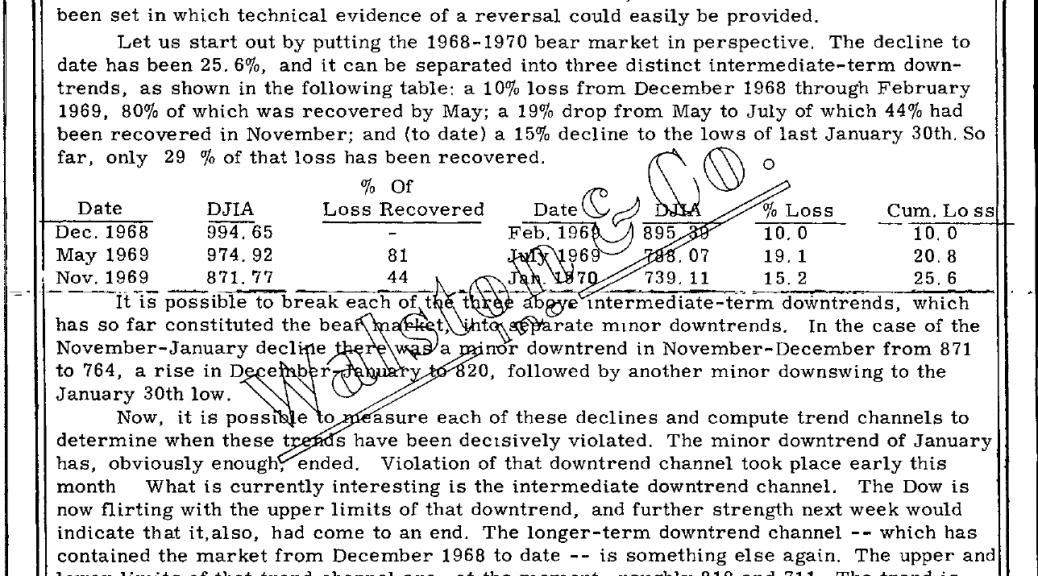 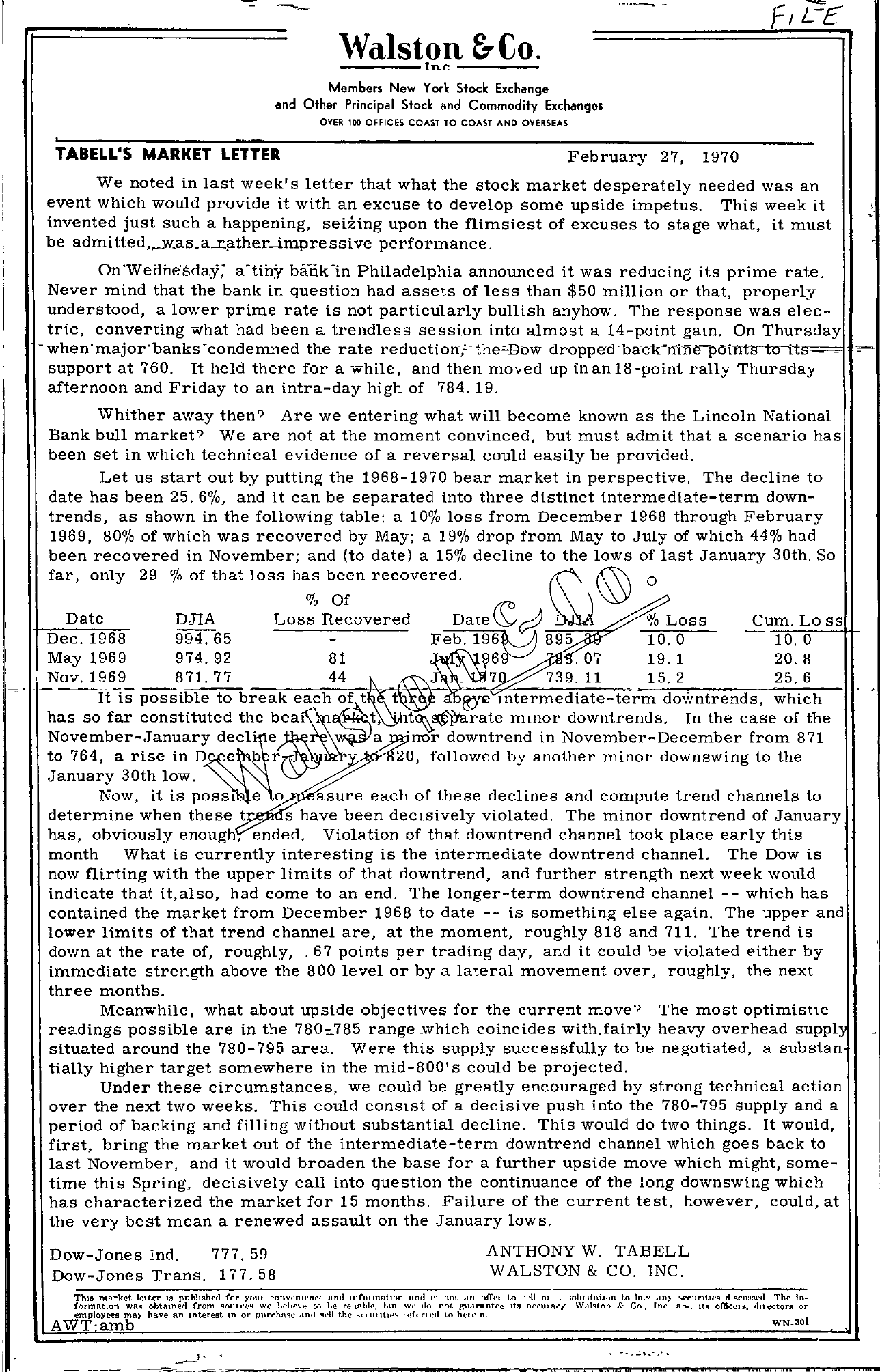 Walston &- Co. —–Inc —– Members New York Stock Exchange and Other Principal Stock and Commodity Exchanges OVER IDD OFFICES COAST TO COAST AND OVERSEAS TABELL'S MARKET LETTER February 27, 1970 We noted in last week's letter that what the stock market desperately needed was an event which would provide it with an excuse to develop some upside impetus. This week it invented just such a happening, seiZing upon the flimsiest of excuses to stage what, it must be admi ve performance. '. On'Wetlne'sday; a-tiny bajik-in Philadelphia announced it was reducing its prime rate. Never mind that the bank in question had assets of less than 50 million or that, properly understood, a lower prime rate is not particularly bullish anyhow. The response was electric, converting what had been a trendless session into almost a 14-point gam. On Thursday – when' major .banks -condemned the rate reduction,' the-'-Dow droppe-d support at 760. It held there for a while, and then moved up inanl8-point rally Thursday afternoon and Friday to an intra-day high of 784.19. – Whither away then Are we entering what will become known as the Lincoln National Bank bull market We are not at the moment convinced, but must admit that a scenario has been set in which technical evidence of a reversal could easily be provided. Let us start out by putting the 1968-1970 bear market in perspective. The decline to date has been 25. 60/0, and it can be separated into three distinct intermediate-term down- trends, as shown in the following table a 100/0 loss from December 1968 through February 1969, 800/0 of which was recovered by May; a 190/0 drop from May to July of which 440/0 had been recovered in November; and (to date) a 150/0 decline to the lows of last January 30th. So far, only 29 of that loss has been recovered. Date DJIA 0/0 Of Loss Recovered Date d 0 W Loss Cum. Lo ss Dec. 1968 994.65 – Feb. 10.0 – 10.0 May 1969 974.92 81 07 19.1 20.8 is, Nov. 1969 871. 77 44 – – –It possible to break each of t .7 739. 11 15.2 25.6 tp'e'l.ntermediate-term downtrends, which has so far constituted the mmor downtrends. In the case of the e 'nor downtrend in November-December from 871 to 764, a rise in Deb r 20, followed by another minor downswing to the January 30th low. Now, it is POSSl e 0 asure each of these declines and compute trend channels to determine when these t s have been declsively violated. The minor downtrend of January has, obviously enough, ended. Violation of that downtrend channel took place early this month What is currently interesting is the intermediate downtrend channel. The Dow is now flirting with the upper limits of that downtrend, and further strength next week would indicate that it, also, had come to an end. The longer-term downtrend channel — which has contained the market from December 1968 to date — is something else again. The upper and lower limits of that trend channel are, at the moment, roughly 818 and 711. The trend is down at the rate of, roughly, .67 points per trading day, and it could be violated either by immediate strength above the 800 level or by a lateral movement over, roughly, the next three months. Meanwhile, what about upside objectives for the current move The most optimistic readings possible are in the 780.785 range which coincides with.fairly heavy overhead supply situated around the 780-795 area. Were this supply successfully to be negotiated, a substan tially higher target somewhere in the mid-800's could be projected. Under these circumstances, we could be greatly encouraged by strong technical action over the next two weeks. This could conslst of a decisive push into the 780-795 supply and a period of backing and filling without substantial decline. This would do two things. It would, first, bring the market out of the intermediate-term downtrend channel which goes back to last November, and it would broaden the base for a further upside move which might, some- time this Spring, decisively call into question the continuance of the long downswing which has characterized the market for 15 months. Failure of the current test, however, could, at the very best mean a renewed assault on the January lows. Dow-Jones Ind. 777. 59 Dow-Jones Trans. 177.58 ANTHONY W. TABELL WALSTON & CO. INC. ThIS mllTket letter 113 publisher! for YOUI an.1 IllfolrnntlOn lind 1'1 not .In offt't to 01 It '10Iultllt(On to I,uy ,til) -.ccuntJes The in- formation WR'I obuuned from we hd,c\l' to be rehnil\l', but we ,In not gll,lfantee Its u'rUI!l('Y W,I\ston & Co. fnl' and It'I officels, 111It.CtorR or A W T ' a m bemployee9 have an Interest In or !JUr('hn-,c ,wd 011 the ..,. I Ullll' 1..,(. rI ell lo helelll. WN30l . ., . ..- … ,, , Hi ili …..