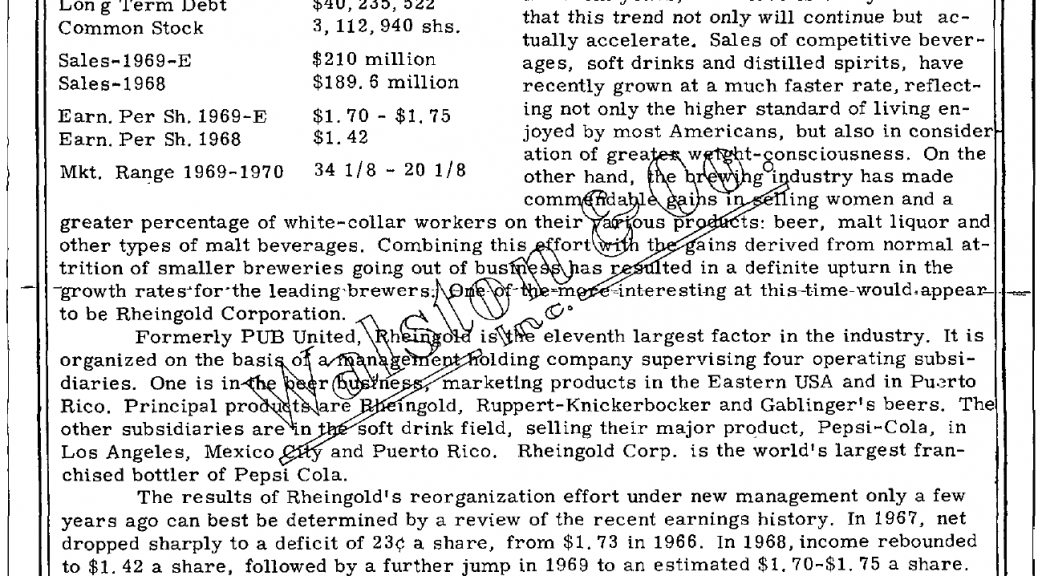 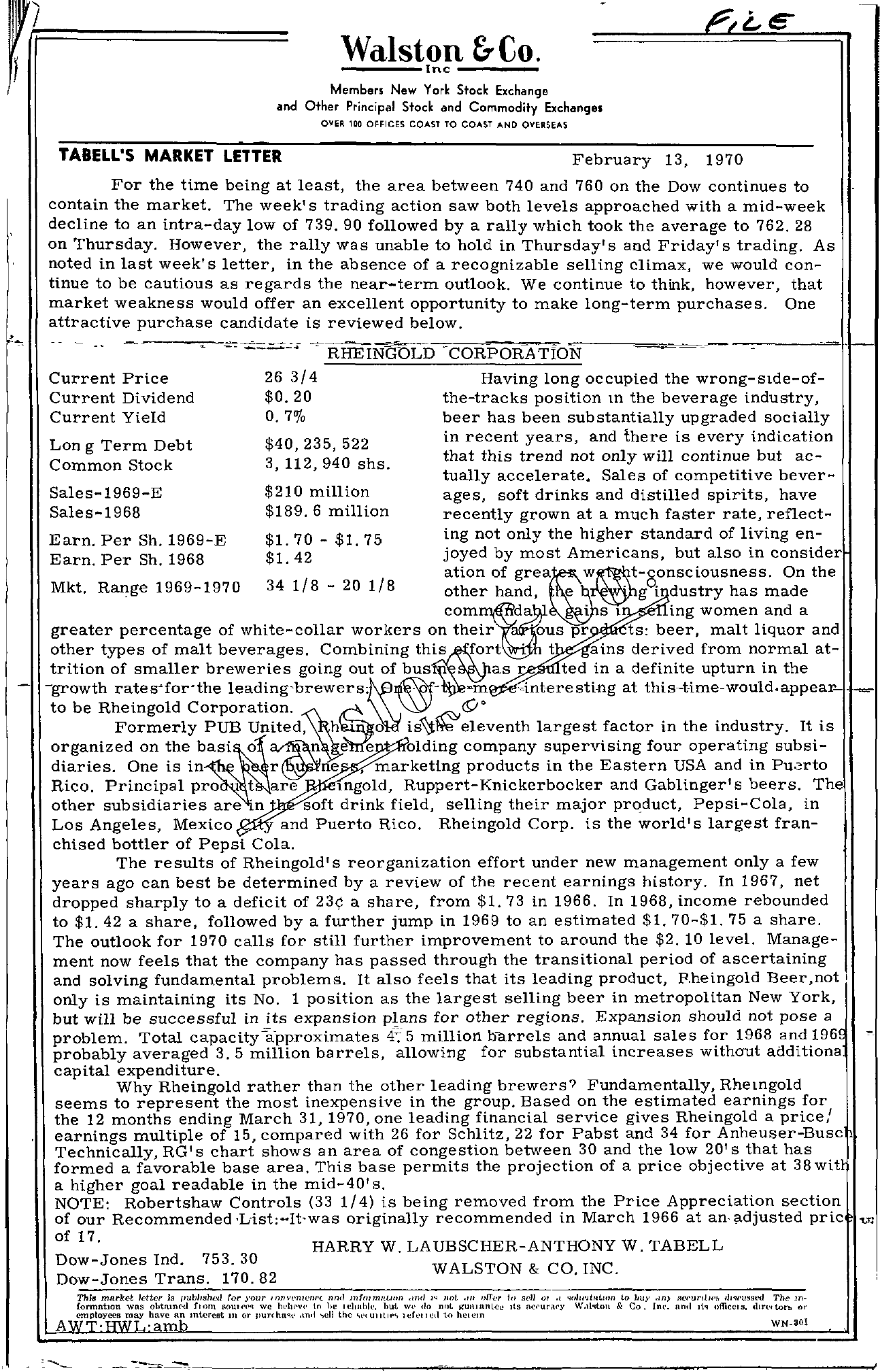 I W—-a–l-s-tIonnc–&–C–o–. Members New York Stock Exchange and Other Principal Stock and Commodity Exchange. OVER 100 OFFICES COAST TO COAST AND OVERSEAS TABELL'S MARKET LETTER February 13, 1970 For the time being at least, the area between 740 and 760 on the Dow continues to contain the market. The week's trading action saw both levels approached with a mid-week decline to an intra-day low of 739.90 followed by a rally which took the average to 762.28 on Thursday. However, the rally was unable to hold in Thursday's and Friday's trading. As noted in last week's letter, in the absence of a recognizable selling climax, we would con- tinue to be cautious as regards the near-term outlook. We continue to think, however, that market weakness would offer an excellent opportunity to make long-term purchases. One attractive purchase candidate is reviewed below. — – -'.. 'CORPORATioN Current Price Current Dividend Current Yield Lon g Term Debt Common Stock Sales-1969-E Sales-1968 Earn. Per Sh. 1969-E Earn. Per Sh. 1968 Mkt. Range 1969-1970 26 3/4 0. 20 O. 7/0 40,235,522 3,112,940 shs. 210 million 189.6 million 1. 70 – 1.75 1. 42 34 1/8 – 20 1/8 Having long occupied the wrong-slde-ofthe-tracks position m the beverage industry, beer has been substantially upgraded socially in recent years, and there is every indication that this trend not only will continue but ac- tually accelerate. Sales of competitive beverages, soft drinks and distilled spirits, have recently grown at a much faster rate, reflect- ing not only the higher standard of living enjoyed by most Americans, but also in consider ation of other hand, e On the dustry has made greater percentage of white-collar workers on their i sling women and a 'ous pr ts beer, malt liquor and other types of malt beverages. Combining fort . t ains derived from normal at- trition of smaller breweries going out of bus as r ted in a definite upturn in the -growth rates'for'the to be Rheingold Corporation. Formerly PUB United, h W 0 at this-time-would.appear- – y' eleventh largest factor in the industry. It is organized on the 0 e e olding company supervising four operating subsi- diaries. One is in marketing products in the Eastern USA and in Rico. Principal pro tare mgold, Ruppert-Knickerbocker and Gablinger's beers. The other subsidiaries are 'n soft drink field, selling their major product, Pepsi-Cola, in Los Angeles, Mexico and Puerto Rico. Rheingold Corp. is the world's largest fran- chised bottler of Pepsi Cola. The results of Rheingold's reorganization effort under new management only a few years ago can best be determined by a review of the recent earnings history. In 1967, net dropped sharply to a deficit of a share, from 1. 73 in 1966. In 1968, income rebounded to 1. 42 a share, followed by a further jump in 1969 to an estimated 1. 70-1. 75 a share. The outlook for 1970 calls for still further improvement to around the 2.10 level. Manage- ment now feels that the company has passed through the transitional period of ascertaining and solving fundamental problems. It also feels that its leading product, P,heingold Beer,not I only is maintaining its No. 1 position as the largest selling beer in metropolitan New York, 4but will be successful in its expansion plans for other regions. Expansion should not pose a problem. Total capacityapproximates 5 million oarrels and annual sales for 1968 and 196 probably averaged 3.5 million barrels, allowing for substantial increases without additiona capital expenditure. Why Rheingold rather than the other leading brewers Fundamentally, Rhemgold seems to represent the most inexpensive in the group. Based on the estimated earnings for the 12 months ending March 31,1970, one leading financial service gives Rheingold a price,' earnings multiple of 15, compared with 26 for Schlitz, 22 for Pabst and 34 for Anheuser-Busc Technically, RG' s chart shows an area of congestion between 30 and the low 20' s that has formed a favorable base area. This base permits the projection of a price objective at 38wit a higher goal readable in the mid-40's. NOTE Robertshaw Controls (33 1/4) is being removed from the Price Appreciation section of our Recommended L-ist-It-was originally recommended in March 1966 at an- adjusted pric LT of 17. Dow-Jones Ind. 753.30 Dow-Jones Trans. 170.82 HARRY W. LAUBSCHER-ANTHONY W. TABELL WALSTON & CO. INC. Thill mRrket letter is ,'I(or )'our .nnv('menf'(. IlIl1J mlmm/li''' .1m! lwt .tll ,,(ft. j sell QI ., ..IU'It/lll/m to ,uy .'In) .'wl'unll.'1. dl'wusstod The 1/1- (ormation WRS olotlunNI ftoln MUlCt'! we ill'hl'VI' tn l)e rdlllhil'. hut Wl' do not gtJlIlltnce Its … ur,\('y & Co, jn', find offtcers, drrl'Itorb nr bemployees may have an mi.ercBt III or PUTfhll'l' ,md '(!II the to herem WN301