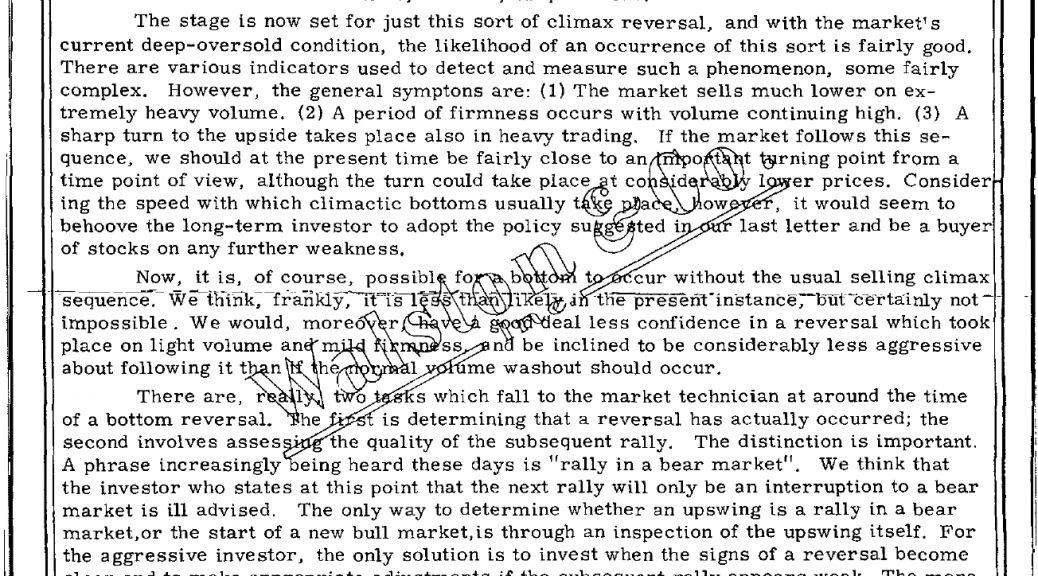 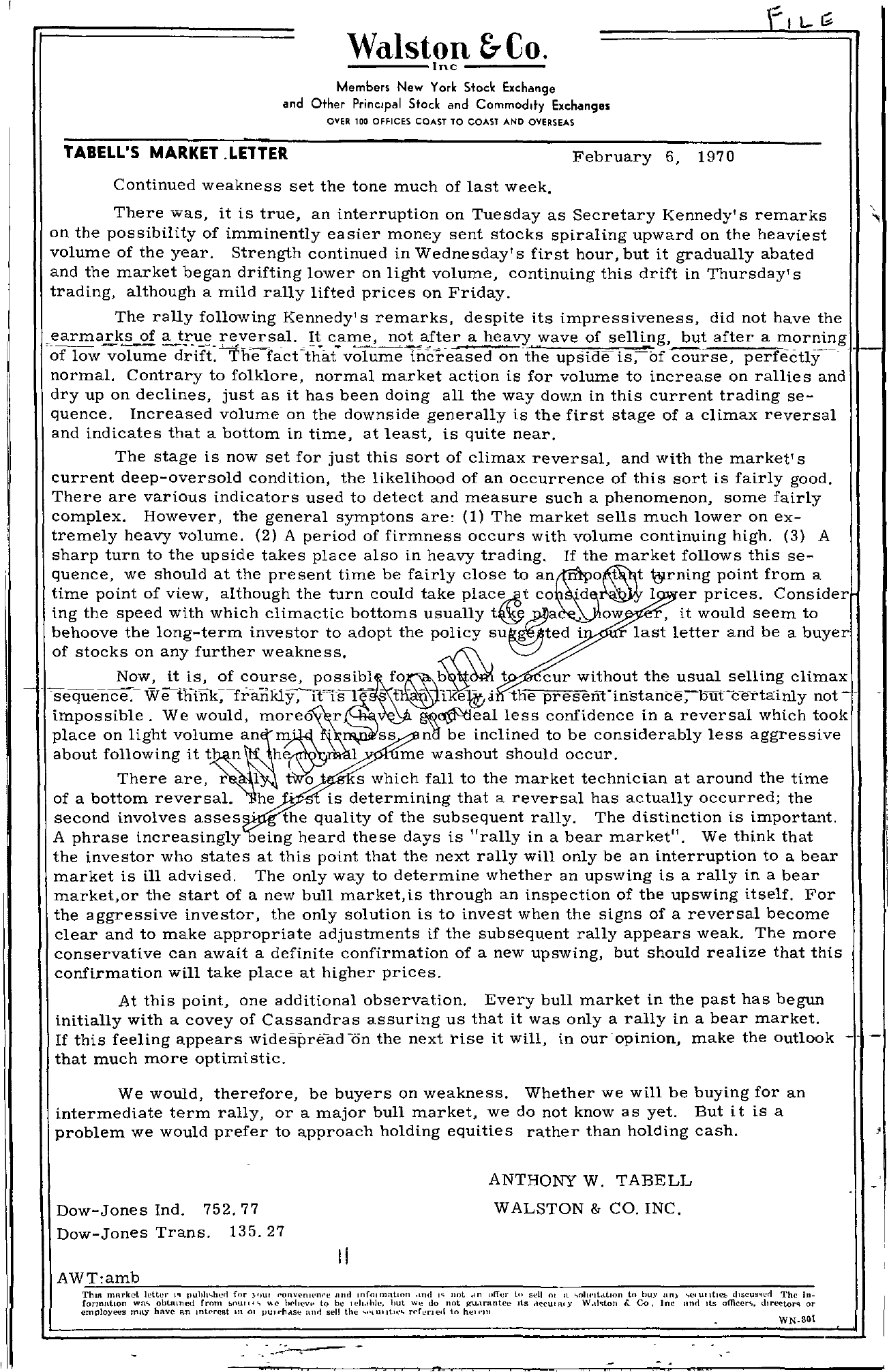 Walston &- Co. Inc Members New York Stock Exchange and Other Princ'pal Stock and Commod,ty Exchange. OVER 100 OFFICES COAST TO COAST AND OVERSEAS TABELL'S MARKET .LETTER February 6, 1970 Continued weakness set the tone much of last week. There was, it is true, an interruption on Tuesday as Secretary Kennedy's remarks on the possibility of imminently easier money sent stocks spiraling upward on the heaviest volume of the year. Strength continued in Wednesday's first hour, but it gradually abated and the market began drifting lower on light volume, continuing this drift in Thursday's trading, although a mild rally lifted prices on Friday. The rally following Kennedy's remarks, despite its impressiveness, did not have the e.versaL It a,fter a heavy. ;vave of selling, but after a morning of low volume drift.The-facnhat volume increased on the upsiae is, of course, perfectly– .. – normal. Contrary to folklore, normal market action is for volume to increase on rallies and dry up on declines, just as it has been doing all the way dow,n in this current trading se- quence. Increased volume on the downside generally is the first stage of a climax reversal and indicates that a bottom in time, at least, is quite near. The stage is now set for just this sort of climax reversal, and with the market's current deep-oversold condition, the likelihood of an occurrence of this sort is fairly good. There are various indicators used to detect and measure such a phenomenon, some fairly complex. However, the general symptons are (1) The market sells much lower on ex- tremely heavy volume. (2) A period of firmness occurs with volume continuing high. (3) A sharp turn to the upside takes place also in heavy trading. If the market follows this se- quence, we shOuld at the present time be fairly close to point from a time point of view, although the turn could take co id 1 er prices. Consider ing the speed with which climactic bottoms usually Y!la ow ,it would seem to behoove the long-term investor to adopt the policy sugg'eAted i last letter and be a buyer of stocks on any further weakness. '\/ Now, it is, of course, -sequence.- t cur without the usual selling climax -e'ThJatlie presentinstance;-l5ut-certainly not– impossible. We would, place on light about following it t n m' he r less confidence in a reversal which took . ss nil' be inclined to be considerably less aggressive I me washout should occur. There are, r I o s which fall to the market technician at around the time of a bottom reversaL he' is determining that a reversal has actually occurred; the second involves asses the quality of the subsequent rally. The distinction is important, A phrase increasingly eing heard these days is rally in a bear market. We think that the investor who states at this point that the next rally will only be an interruption to a bear market is ill advised, The only way to determine whether an upswing is a rally in a bear market,or the start of a new bull market, is through an inspection of the upswing itself. For the aggressive investor, the only solution is to invest when the signs of a reversal become clear and to make appropriate adjustments if the subsequent rally appears weak. The more conservative can await a definite confirmation of a new upswing, but should realize that this confirmation will take place at higher prices. At this point, one additional observation. Every bull market in the past has begun initially with a covey of Cassandras assuring us that it was only a rally in a bear market. If this feeling appears widespread -on the next rise it will, in our opinion, make the outlook that much more optimistic. We would, therefore, be buyers on weakness. Whether we will be buying for an intermediate term rally, or a major bull market, we do not know a s yet. But it is a problem we would prefer to approach holding equities rather than holding cash. j ANTHONY W. TABELL Dow-Jones Ind. 752.77 WALSTON & CO. INC. Dow-Jones Trans. 135.27 II AWTamb Thlf; ml\rkct letter lq Jluhh …herl for f'onVl'nl'n'c llIul rnf(lrmatlOll ,Ind I Ilfl .. n ITer tn sdl 01 It OIlI'lt.1.tIOIl to buy an (hs,usql'rl The In- rormllllOn woo, obtmned from …. \\(' hf'll('v,' to he 11.'11.11111.'. hut We do 1I0t gu.lrantee Its ,I('('UI!\'Y W,II;ton l\. Go, Inc nml Its officer,, ,hrl.'('toTq OT employees mny have an Intf'rest III 01 anri sell the … .. T('rL'rle.1 to hellll WN.SOI