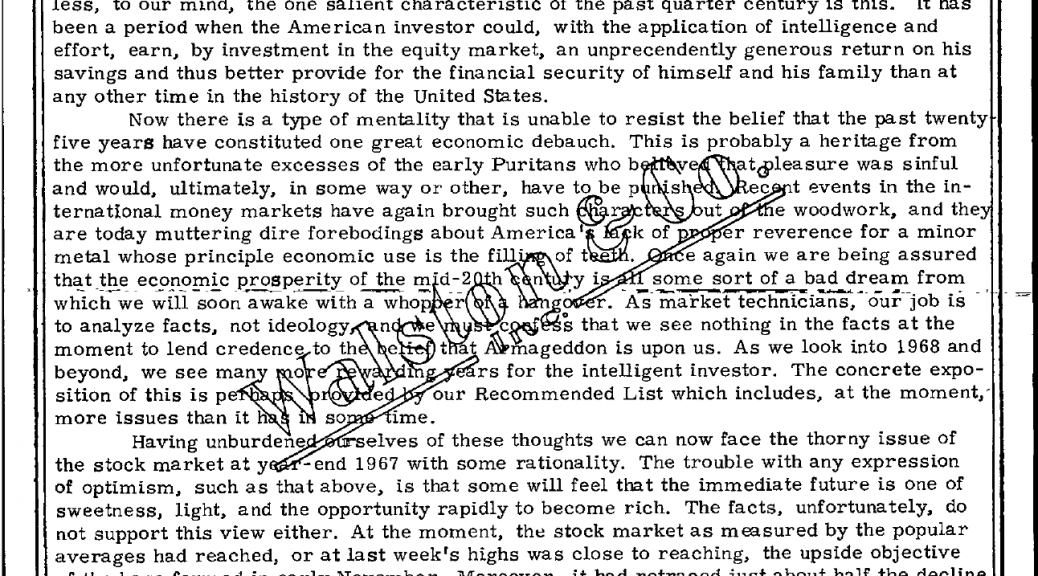 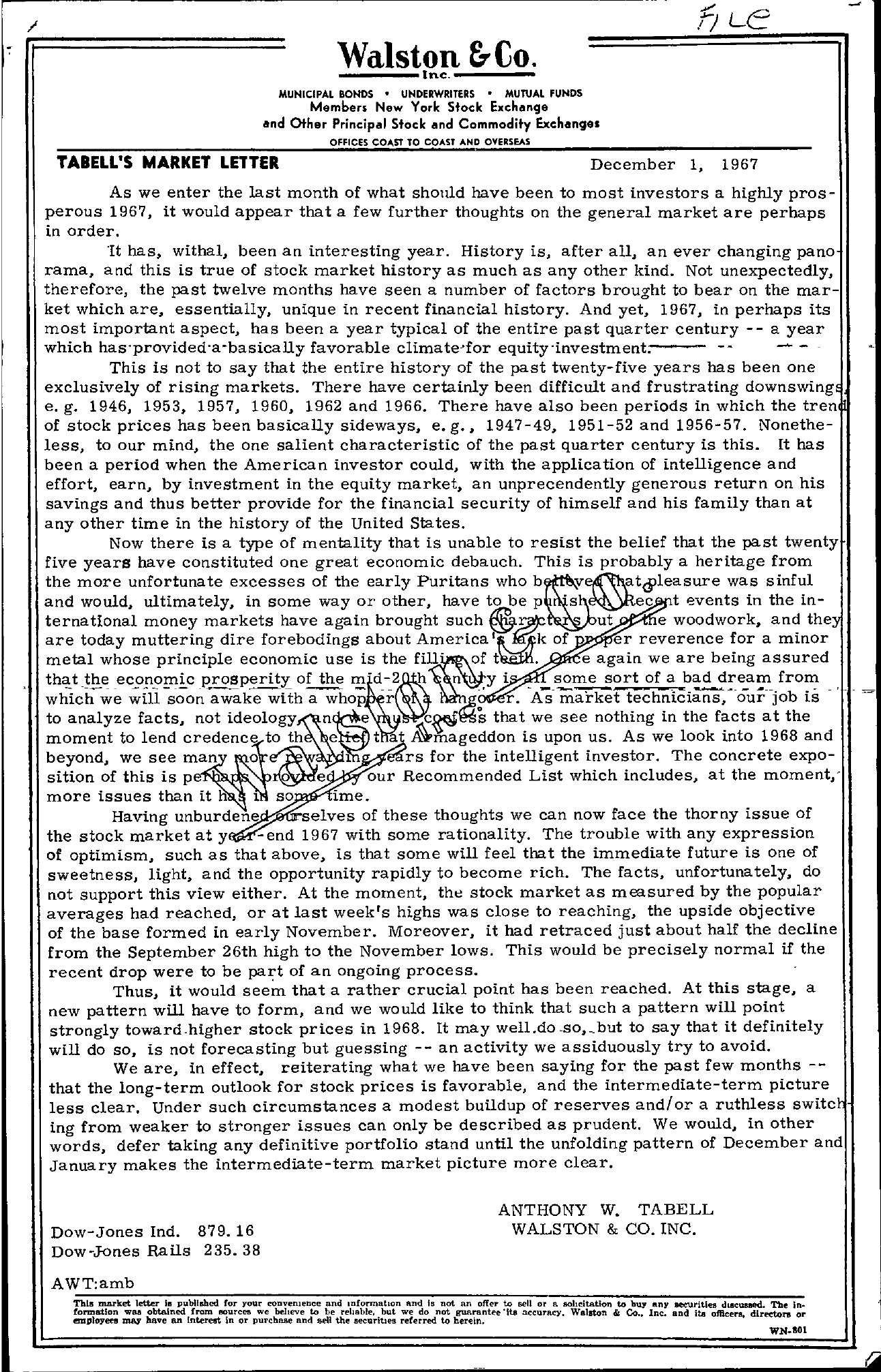 r————————————————————————— / Walston &Co. —-Inc. MUNICIPAL BONDS UNDERWRITERS MUTUAL FUNDS Members New York Stock Exchange and Other Principal Stock and Commodity Exchanges TAIELL'S MARKET LETTER OFFICES COAST TO COAST AND OVERSEAS December 1, 1967 As we enter the last month of what should have been to most investors a highly pros- perous 1967, it would appear that a few further thoughts on the general market are perhaps in order. It has, withal, been an interesting year. History is, after all, an ever changing pano rama, and this is true of stock market history as much as any other kind. Not unexpectedly, therefore, the past twelve months have seen a number of factors brought to bear on the mar- ket which are, essentially, unique in recent financial history. And yet, 1967, in perhaps its most important aspect, has been a year typical of the entire past quarter century – – a year which haS'provided'a-basically favorable climatefor equityinvestment. This is not to say that the entire history of the past twenty-five years has been one exclusively of rising markets. There have certainly been difficult and frustrating downswing e. g. 1946, 1953, 1957, 1960, 1962 and 1966. There have also been periods in which the tren of stock prices has been basically sideways, e. g., 1947-49, 1951-52 and 1956-57. Nonethe- less, to our mind, the one salient characteristic of the past quarter century is this. It has been a period when the American investor could, with the application of intelligence and effort, earn, by investment in the equity market, an unprecendently generous return on his savings and thus better provide for the financial security of himself and his family than at any other time in the history of the United States. Now there is a type of mentality that is unable to resist the belief that the past twenty five years have constituted one great economic debauch. This is probably a heritage from the more unfortunate excesses of the early Puritans who was sinful and would, ultimately, in some way or other, have to be p 's t events in the in- ternational money markets have again brought such are today muttering dire forebodings about America 'f\. ut e woodwork, and the of er reverence for a minor metal whose principle economic use is the of e again we are being assured thatthe economic prosperity of the m'd-m n y i which'we with a whop.r some sort of a bad dream from technlcians,-Q'ur-job is – to analyze facts, not ideology n e that we see nothing in the facts at the beyond, we see man 1 rs for the intelligent investor. The concrete expo- sition of this is p our Recommended List which includes, at the moment,' more issues than it 11 1 so ime. Having unburdene selves of these thoughts we can now face the thorny issue of the stock market at y -end 1967 with some rationality. The trouble with any expression of optimism, such as that above, is that some will feel that the immediate future is one of sweetness, light, and the opportunity rapidly to become rich. The facts, unfortunately, do not support this view either. At the moment, the stock market as measured by the popular averages had reached, or at last week's highs was close to reaching, the upside objective of the base formed in early November. Moreover, it had retraced just about half the decline from the September 26th high to the November lows. This would be precisely normal if the recent drop were to be part of an ongOing process. Thus, it would that a rather crucial point has been reached. At this stage, a new pattern will have to form, and we would like to think that such a pattern will point strongly toward-higher stock prices in 1968. It may well.do.so,.but to say that it definitely will do so, is not forecasting but guessing — an activity we assiduously try to avoid. We are, in effect, reiterating what we have been saying for the past few months — that the long-term outlook for stock prices is favorable, and the intermediate-term picture less clear. Under such circumstances a modest buildup of reserves and! or a ruthless switc ing from weaker to stronger issues can only be described as prudent. We would, in other words, defer taking any definitive portfolio stand until the unfolding pattern of December and January makes the intermediate-term market picture more clear. Dow-Jones Ind. 879. 16 Dow-Jones Rails 235.38 ANTHONY W. TABELL WALSTON & CO. INC. AWTamb This market letter III published for yOUt' convemence and Information I\nd Is not an offer to sell or a solicitation to buy any aeeurltles dIBCUSBed. The in formation euDloyeee mwaa.vs obtained from BOurces we beheve to- be reliable. but have an Interest in or pUFchase Bnd sell the securities rweefedrroedntoot guarantee herein. 'Ita .accuracy. Walston &. Co., Inc. and ita offteers. direetors or