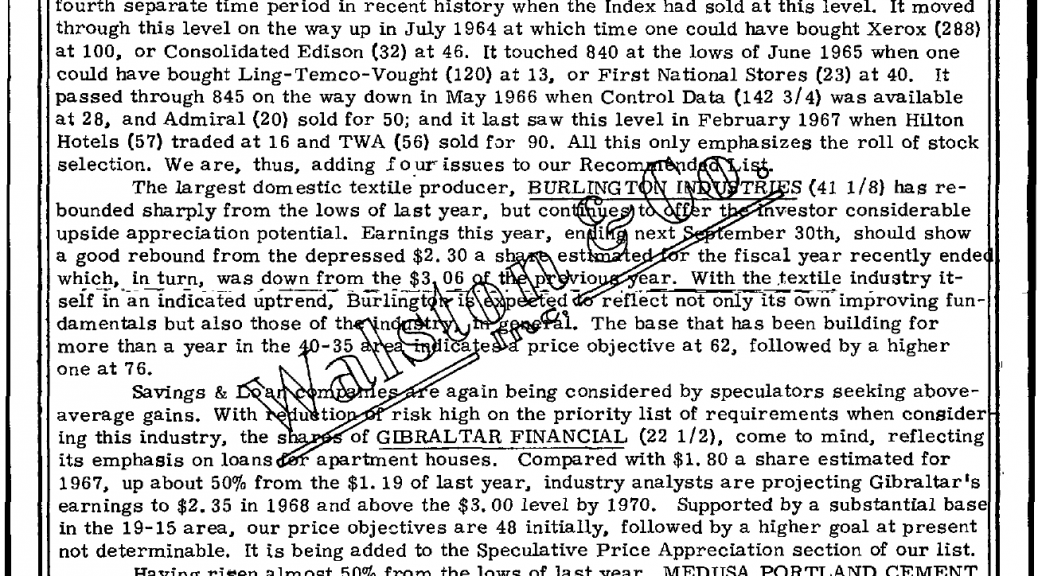 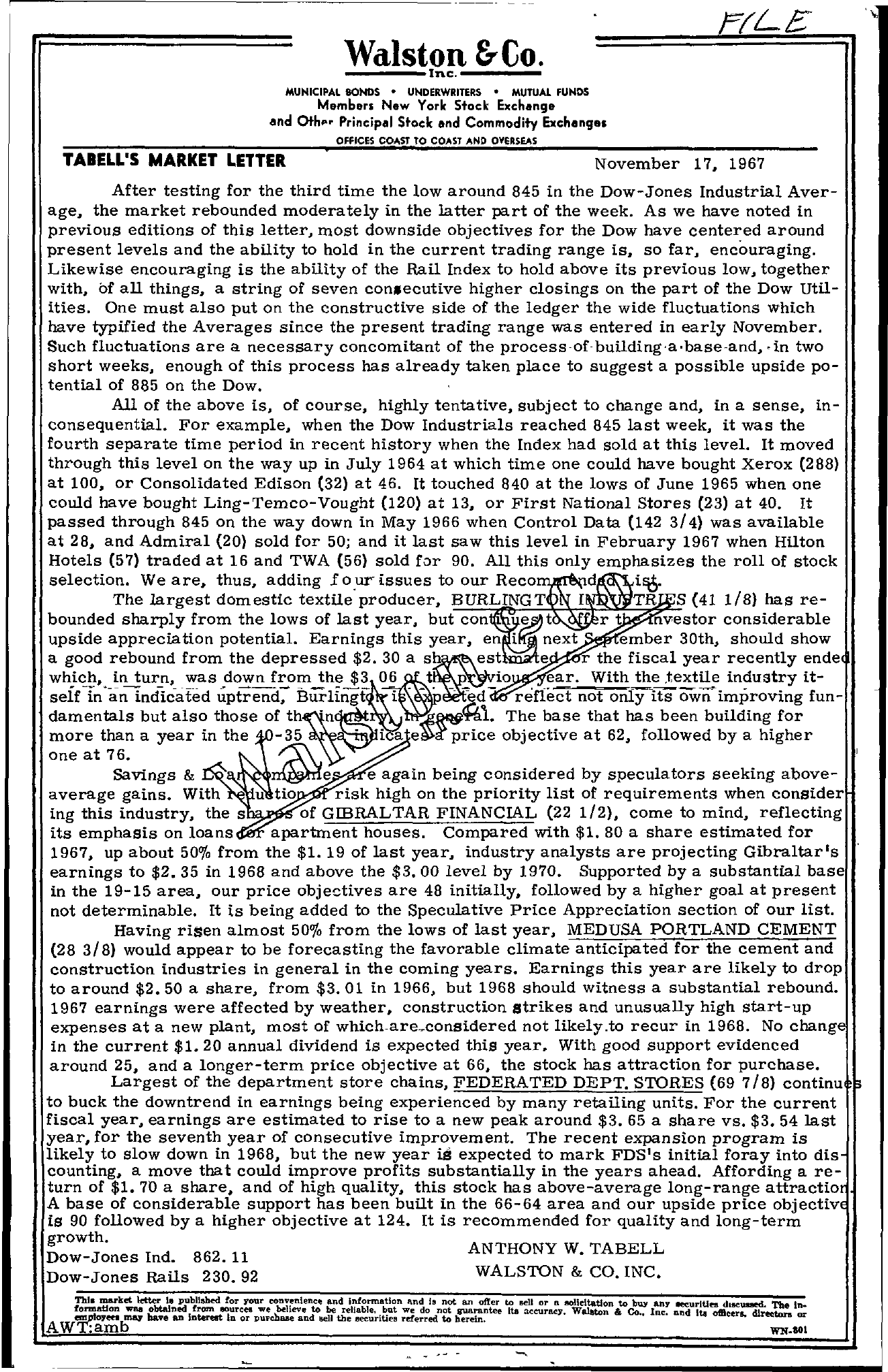 – W—a-l-sItnonc.&-C–o-. MUNICIPAL BONDS UNDERWRITERS MUTUAL FUNDS Members New York Stock Exchange and Othp, Principal Stock and Commodity Exchanges TABELL'S MARKET LETTER OFfiCES COAST TO COAST AND OVERSEAS November FILe 17, 1967 After testing for the third time the low around 845 in the Dow-Jones Industrial Aver- age, the market rebounded moderately in the latter part of the week. As we have noted in previous editions of this letter, most downside objectives for the Dow have centered around present levels and the ability to hold in the current trading range is, so far, encouraging. Likewise encouraging is the ability of the Rail Index to hold above its previous low, together with, bf all things, a string of seven con.ecutive higher closings on the part of the Dow Util- ities. One must also put on the constructive side of the ledger the wide fluctuations which have typified the Averages since the present trading range was entered in early November. Such fluctuations are a necessary concomitant of the processofbuildingabase-and, -in two short weeks, enough of this process has already taken place to suggest a possible upside po- tential of 885 on the Dow. All of the above is, of course, highly tentative, subject to change and, in a sense, in- consequential. For example, when the Dow Industrials reached 845 last week, it was the fourth separate time period in recent history when the Index had sold at this level. It moved through this level on the way up in July 1964 at which time one could have bought Xerox (288) at 100, or Consolidated Edison (32) at 46. It touched 840 at the lows of June 1965 when one could have bought Ling-Temco-Vought (120) at 13, or First National Stores (23) at 40. It passed through 845 on the way down in May 1966 when Control Data (142 3/4) was available at 28, and Admiral (20) sold for 50; and it last saw this level in February 1967 when Hilton Hotels (57) traded at 16 and TWA (56) sold r0r 90. All this only emphasizes the roll of stock selection. We are, thus, adding i 0.111 issues to our Reco d The largest dom estic textile producer, BURLING T TR S (41 1/8) has re- bounded sharply from the lows of last year, but con r upside appreciation potential. Earnings this year, en next ember 30th, should show a good rebound from the depressed 2. 30 a s m s t e r the fiscal year recently ende which, in turn, was down from the 3 io ear. With the .textile industry it- fun- more than a year in the -35 0\one at 76. . price objective at 62, followed by a higher Savings & e again being considered by speculators seeking above- average gains. With u tio risk high on the priority list of requirements when consider ing this industry, the s of GIBRALTAR FINANCIAL (22 1/2). come to mind, reflecting its emphaSis on loans apartment houses. Compared with 1. 80 a share estimated for 1967, up about 500/0 from the 1. 19 of last year, industry analysts are projecting Gibraltar's earnings to 2.35 in 1968 and above the 3.00 level by 1970. Supported by a substantial base in the 19-15 area, our price objectives are 48 initially, followed by a higher goal at present not determinable. It is being added to the Speculative Price Appreciation section of our list. Having risen almost 500/0 from the lows of last year, MEDUSA PORTLAND CEMENT (28 3/8) would appear to be forecasting the favorable climate anticipated for the cement and construction industries in general in the coming years. Earnings this year are likely to drop to around 2.50 a share, from 3.01 in 1966, but 1968 should witness a substantial rebound. 1967 earnings were affected by weather, construction strikes and unusually high start-up expenses at a new plant, most of which-are..considered not likely.to recur in 1968. No chang in the current 1. 20 annual dividend is expected this year. With good support evidenced around 25, and a longer-term price objective at 66, the stock has attraction for purchase. Largest of the department store chains, FEDERATED DEPT. STORES (69 7/8) continu to buck the downtrend in earnings being experienced by many retailing units. For the current fiscal year, earnings are estimated to rise to a new peak around 3. 65 a share vs. 3. 54 last year, for the seventh year of consecutive improvement. The recent expansion program is likely to slow down in 1968, but the new year is expected to mark FDS's initial foray into dis counting, a move that could improve profits substantially in the years ahead. Affording a re- turn of 1. 70 a share, and of high quality, this stock has above-average long-range attractio A base of considerable support has been built in the 66-64 area and our upside price objectiv is 90 followed by a higher objective at 124. It is recommended for quality and long-term growth. Dow-Jones Ind. 862. 11 Dow-Jones Rails 230.92 ANTHONY W. TABELL WALSTON & CO. INC. AWTambfTohrml. amtioarnkewt alsettoebrtaIienepdubflrioshmedl5f0ourreyeaouwr e believe tnaI have an interest In or pUFchase an dto6ebla1entdhreeilnieatebotlM!eu,rnlaUteioenrweaefnedrdroe19dntnooot thgeaurnaerinaon.ffteere to aell or a aolleltatlon to buy Ita aceurRCY. Walaton & Co., any Inc. aInltedUirtiUa eoafBdelesrcllu adedlr.eTdhoen In. or WH. . . I