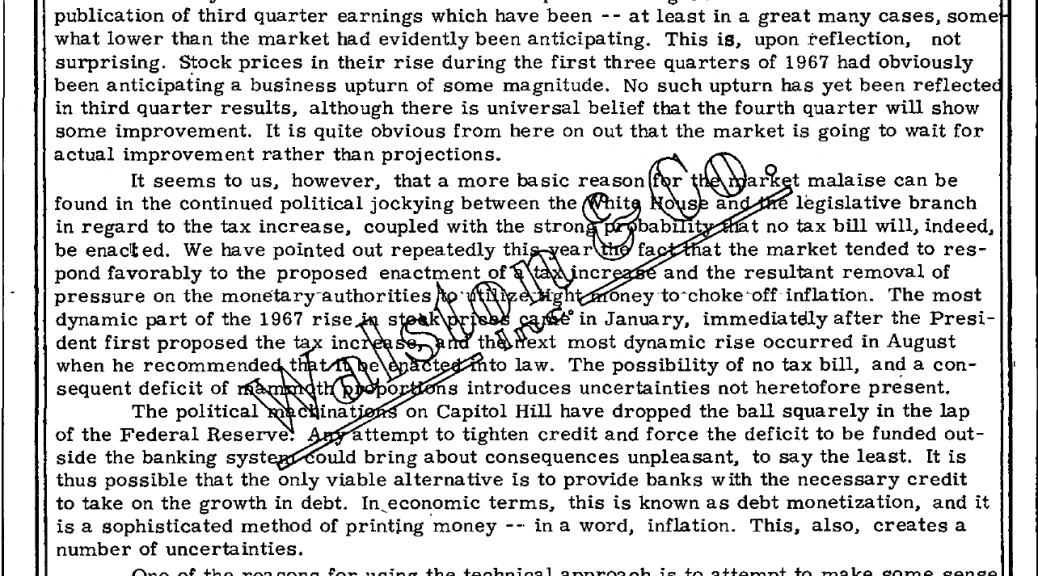 ————————————————————, Walston &Co. – Inc. —….;.- MUNICIPAL BONDS UNDERWRITERS MUTUAL FUNDS Members New York Stock Exchonge and Other Principal Stock and Commodity Exchanges TABELL'S MARKET LETTER OFFICES COAST TO COAST AND OVERSEAS October 20, 1967 Equity markets, for the most part, continued reactionary during the past week. The week commenced with an almost-10-point slide on the Dow-Jones Industrial Average, which was followed by further weakness on Tuesday and Wednesday. The publication of the short interest sparked a strong upswing on Thursday mo'ning, but gains were almost entirely wiped out by the close,and most stocks actually declined on the day. Following this disappoin ing performance, the slide continued on Friday. The week's intra-day low was 891. 35. The continuation of the drop through Friday's trading made the current downswing the longest in point of time in 1967, and the most severe in percentage drop, with the exceptionof the steeper decline around the time of theIsraeli crisis-inlVIayi\ii1eThe market climate quite obviously, has changed somewhat from tl).at which prevailed during the Spring and Summer, and it is worthwhile attempting to pinpoint a few reasons for the rather desultory actio of a great many stocks during the past month. Probably the most direct effect on stock prices during October has been due to the publication of third quarter earnings which have been – – at least in a great many cases, some what lower than the market had evidently been anticipating. This is, upon reflection, not surprising. Stock prices in their rise during the first three quarters of 1967 had obviously been anticipating a business upturn of some magnitude. No such upturn has yet been reflecte in third quarter results, although there is universal belief that the fourth quarter will show some improvement. It is quite obvious from here on out that the market is going to wait for actual improvement rather than projections. It seems to us, however, that a more basic reason r t malaise can be found in the continued political jockying between the a t 0 s an legislative branch in regard to the tax increase, coupled with the stron ab It t no tax bill will, indeed, be enac1ted. We have pointed out repeatedly pond favorably to the proposed enactment of ear fa t the market tended to res- ncr and the resultant removal of pressure on the The most dynamic part of the 1967 in January, immediatEily after the Presi- dent first ta inc when he recommende t ext most dynamic rise occurred in August t to law. The possibility of no tax bill, and a con- sequent deficit of s introduces uncertainties not heretofore present. The political inat on Capitol Hill have dropped the ball squarely in the lap of the Federal Reserve. attempt to tighten credit and force the deficit to be funded out- side the banking syst ould bring about consequences unpleasant, to say the least. It is thus possible that the only viable alternative is to provide banks with the necessary credit to take on the growth in debt. In,economic terms, this is known as debt monetization, and it is a sophisticated method of printing 'money -. in a word, inflation. This, also, creates a number of uncertainties. One of the reasons for using the technical approach is to attempt to make some sense out of an uncertain climate such as the present. We mentioned in last week's letter the possibility of a 870-865 downside target on the Dow-Jones Industrials, and the probability of a continued drop to this level now becomes fairly gOOd. The likelihood is further increase by the proposed changes in margin requirements' requested by the Federal Reserve Board after the close on Friday. On the otherhand, thecRail Average reached its downside target at this week's intra-day low and may well prove somewhat more resistant to decline than has been the case in the past. Meanwhile, we would expect a goodly number of stocks to remain relatively resistant to the decline, with some even advanCing in the face of a poor general market climate. All of this does not change the long-term picture which, to our mind, remains generally favorable for common stocks. It is possible, of course, that out of the present weakness some signs of longer term deterioration will develop. At the moment, at least, we see little cause for undue concern and believe short-to-intermediate-term weakness should be utilized for purchases in selected issues. Dow-Jones Ind. 896. 73 Dow-Jones Rails 247.50 ANTHONY W. TABELL WALSTON & CO. INC.