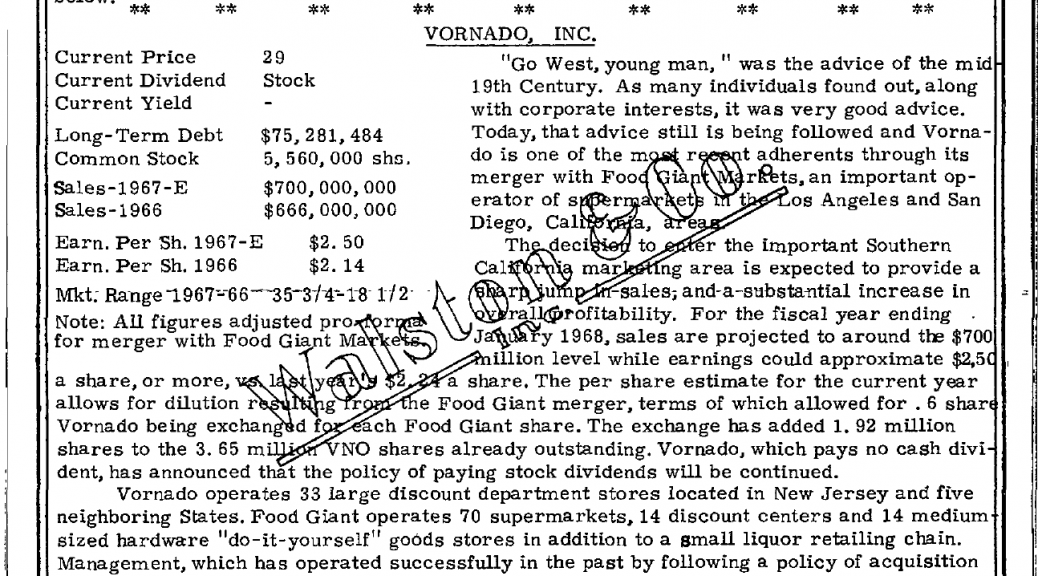 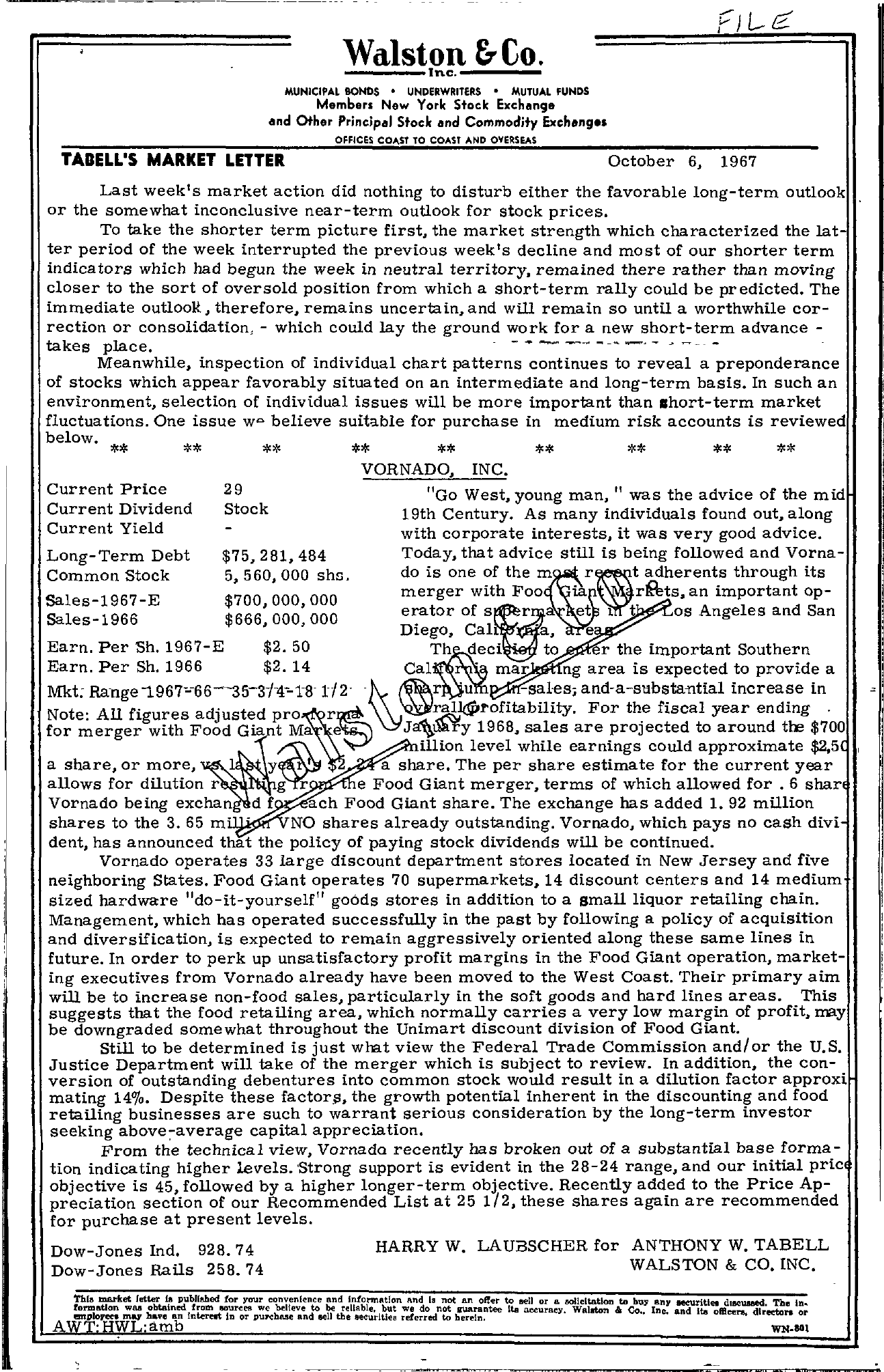 – – – —— —— W—a-lsItnocn.&–C-o-. MUNICIPAL BONOS UNDERWRITERS MUTUAL FUNDS Members New York Stock Exchange and Other Principal Stock and Commodity Ex.heng OFFICES COAST TO COAST AND OVERSEAS TADELL'S MARKET LETTER October 6, 1967 Last week's market action did nothing to disturb either the favorable long-term outlook or the somewhat inconclusive near-term outlook for stock prices. To take the shorter term picture first, the market strength which characterized the lat- ter period of the week interrupted the previous week's decline and most of our shorter term indicators which had begun the week in neutral territory, remained there rather than moving closer to the sort of oversold position from which a short-term rally could be predicted. The immediate outlooR, therefore, remains uncertain, and will remain so until a worthwhile cor- rection or consolidation, – which could lay the ground work for a new short-term advance – takes place. – – – – — — -. – Meanwhile, inspection of individual chart patterns continues to reveal a preponderance of stocks which appear favorably situated on an intermediate and long-term basis. In such an environment, selection of individual issues will be more important than ahort-term market fluctuations. One issue W Q believe suitable for purchase in medium risk accounts is reviewed below. VORNADO, INC. Current Price Current Dividend Current Yield 29 Stock Go West, young man, was the advice of the mid 19th Century. As many individuals found out, along with corporate interests, it was very good advice. Long-Term Debt Common Stock Sales-1967-E Sales-1966 75,281,484 5,560, 000 shs. 700,000,000 666 000 000 Today, that advice still is being followed and Vorna- do is one of the merger with Foo ia adherents through its rats, an important op- erator of s e et 1 Diego, Cal -a, e os Angeles and San Earn. Per Sh. 1967-E Earn. Per Sh. 1966 2. 50 2.14 – to er the important Southern Cal – mar ng area is expected to provide a Mkt. Range 1967'-66-35-3-t-4'-18 1/2 in Note All figures adjusted pro r For th.e flscal year endmg . illion level while earnings could approximate 2,5 a share, or more, y a share. The per share estimate for the current year allows for dilution r g r e Food Giant merger, terms of which allowed for. 6 shar Vornado being exchan d f ach Food Giant share. The exchange has added 1. 92 million shares to the 3.65 m – – NO shares already outstanding. Vornado, which pays no cash divi dent, has announced that the policy of paying stock dividends will be continued. Vornado operates 33 large discount department stores located in New Jersey and five neighboring States. Food Giant operates 70 supermarkets, 14 discount centers and 14 medium sized hardware dO-it-yourself goods stores in addition to a small liquor retailing chain. Management, which has operated successfully in the past by following a policy of acquisition and diversification, is expected to remain aggressively oriented along these same lines in future. In order to perk up unsatisfactory profit margins in the Food Giant operation, market- ing executives from Vornado already have been moved to the West Coast. Their primary aim will be to increase non-food sales, particularly in the soft goods and hard lines areas. This suggests that the food retailing area, which normally carries a very low margin of profit, may be downgraded somewhat throughout the Unimart discount division of Food Giant. Still to be determined is just what view the Federal Trade Commission and/or the U.S. Justice Department will take of the merger which is subject to review. In addition, the conversion of outstanding debentures into common stock would result in a dilution factor approxi mating 14. Despite these factor;, the growth potential inherent in the discounting and food retailing businesses are such to warrant serious consideration by the long-term investor seeking capital appreciation. From the technical view, Vornado recently has broken out of a substantial base forma- tion indicating higher levels. Strong support is evident in the 28-24 range, and our initial pric objective is 45, followed by a higher longer-term objective. Recently added to the Price Ap- preciation section of our Recommended List at 25 1/2, these shares again are recommended for purchase at present levels. Dow-Jones Ind. 928.74 Dow-Jones Rails 258.74 HARRY W. LAUaSCHER for ANTHONY W. TABELL WALSTON & CO. INC. Thrll market Jetter f8 publl8hed for your convenience and fnfotmatlon Rnd Is not an oft'er to sell or a solicitation to buy any aeeuritiel dlseuastd The In A . WLambfIIO!IlD'lDPiaotyleoens mwaays hoabvteainaend IfnrtoemrNtl!Oinuroeers pwurechbaeslieevaendtoseblle threeHsaebcleu,ritbieust rweeferdroedntoot hpeareriann. tee Ita aeeuraey, Walaton &; Co.. Inc. and ita ofBeen. dlr'ed.on 0; WNIOI