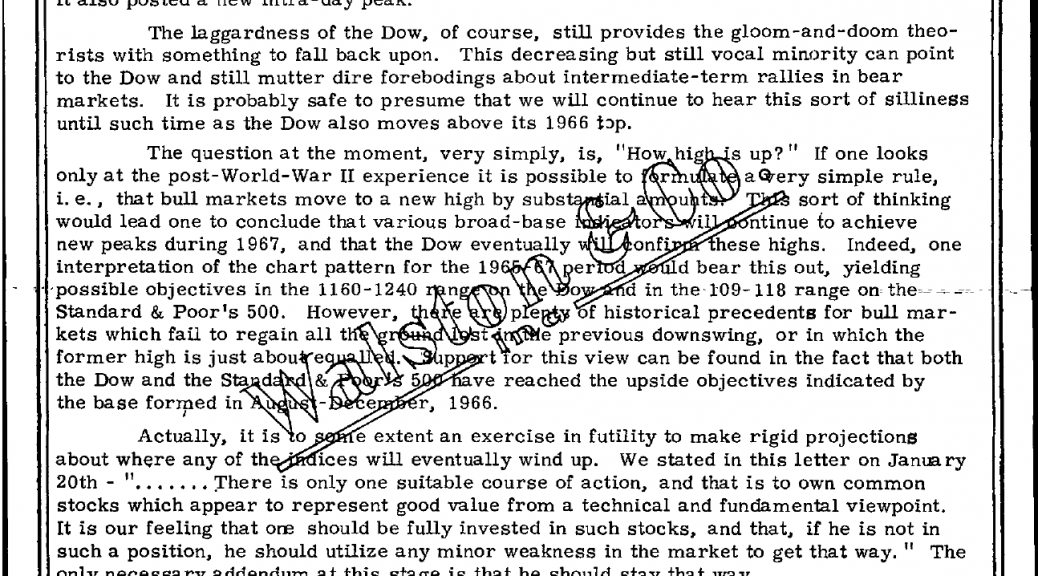 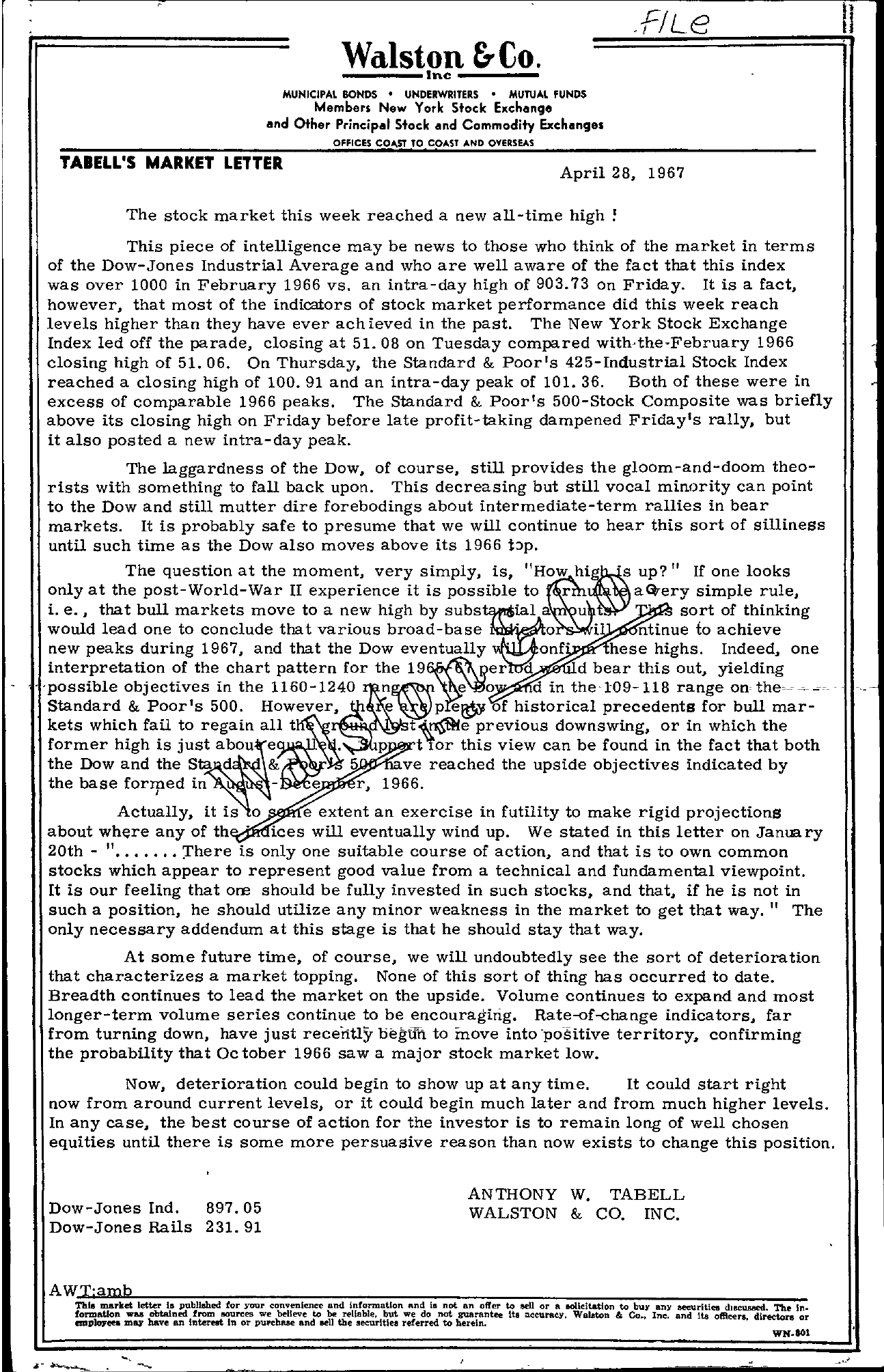 Walston &Co. —-Inc ;….;……;..- -fiLe MUNICIPAL BONDS UNDERWRITERS MUTUAL fUNDS Members New York Stock Exchange and Other Principal Stock and Commodity Exchanges OFFICES COA.ST TO COAST AND OVERSEAS TABELL'S MARKET LETTER April 28, 1967 II The stock market this week reached a newall-time high! This piece of intelligence may be news to those who think of the market in terms of the Dow-Jones Industrial Average and who are well aware of the fact that this index was over 1000 in February 1966 vs. an intra-day high of 903.73 on Friday. It is a fact, however, that most of the indicators of stock market performance did this week reach levels higher than they have ever ach ieved in the past. The New York Stock Exchange Index led off the parade, closing at 51. 08 on Tuesday compared 1966 closing high of 51. 06. On Thursday, the Standard & Poor's 425-Industrial Stock Index reached a closing high of 100.91 and an intra-day peak of 101. 36. Both of these were in excess of comparable 1966 peaks. The Standard & Poor's 500-Stock Composite was briefly above its closing high on Friday before late profit-taking dampened Friday's rally, but it also posted a new intra-day peak. The laggardness of the Dow, of course, still provides the gloom-and-doom theorists with something to fall back upon. This decreasing but still vocal min.ority can point to the Dow and still mutter dire forebodings about intermediate-term rallies in bear markets. It is probably safe to presume that we will continue to hear this sort of silliness until such time as the Dow also moves above its 1966 tp. The question at the moment, very simply, is, How up II If one looks only at the post-World-War II experience it is possible to simple rule, i. e., that bull markets move to a new high by I a u t . sort of thinking would lead one to conclude that various broad-base 0 i ntinue to achieve new peaks during 1967, and that the Dow eventually onf hese highs. Indeed, one interpretation of the chart pattern for the a d bear this out, yielding -possible objectives in the ll60-1240 e0 din the-109-ll8 range Standard & Poor's 500. However, e of historical precedents for bull mar- kets which fail to regain all t t previous downswing, or in which the the Dow and the Sta d the base forrped in & 5 ve reached the upside objectives indicated by – e r, 1966. Actually, it is 0 e extent an exercise in futility to make rigid prOjections about where any of th ices will eventually wind up. We stated in this letter on January 20th – ……. rhere is only one suitable course of action, and that is to own common stocks which appear to represent good value from a technical and fundamental viewpoint. It is our feeling that ore should be fully invested in such stocks, and that, if he is not in such a pOSition, he should utilize any minor weakness in the market to get that way. The only necessary addendum at this stage is that he should stay that way. At some future time, of course, we will undoubtedly see the sort of deterioration that characterizes a market topping. None of this sort of thing has occurred to date. Breadth continues to lead the market on the upside. Volume continues to expand and most longer-term volume series continue to be encouragirig. Rate-of-change indicators, far from turning down, have just recently begun to move into -po'sitive territory, confirming the probability that Oc tober 1966 saw a major stock market low. Now, deterioration could begin to show up at any time. It could start right now from around current levels, or it could begin much later and from much higher levels. In any case, the best course of action for the investor is to remain long of well chosen equities until there is some more persuasive reason than now exists to change this position. Dow-Jones Ind. 897.05 Dow-Jones Rails 231. 91 ANTHONY W. TABELL WALSTON & CO. INC. AWT;amb Thl, market letter Is Ptlbllahed for your convenience and Information And Is not an offer to seU or a aoIidtation to buy any IJeeUrities dlscWll!ed. The in- formation was obtfI.lned trom IIOUrees we believe to be reliable. but employeH mB,J have aD Interest In or pupebaae and sell the l!Ieeurltiea we do not guarantee referred to herein. Ita aecuraey. WBlaton & Co., Ine. and its officers. directors or