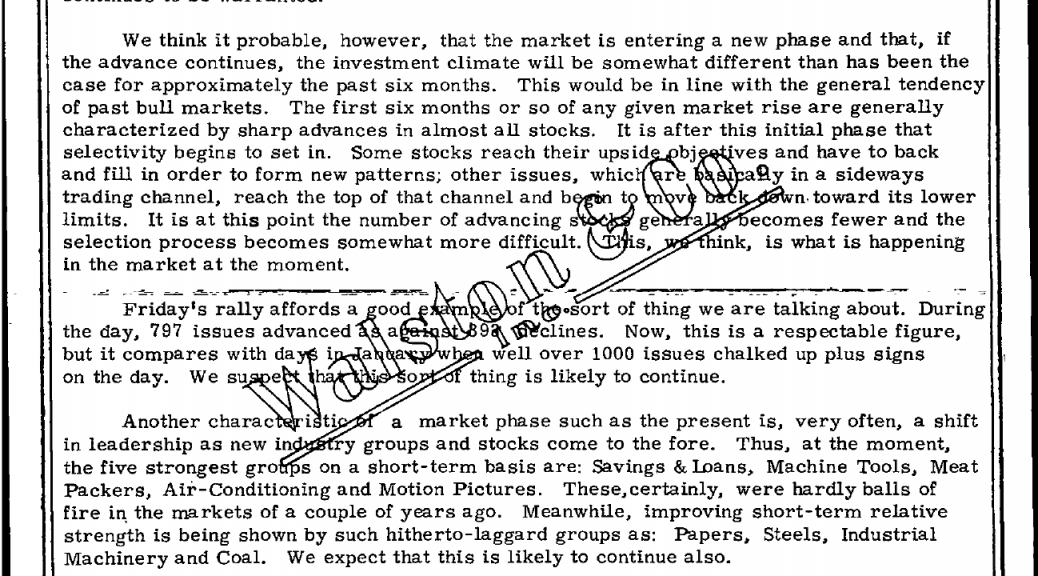 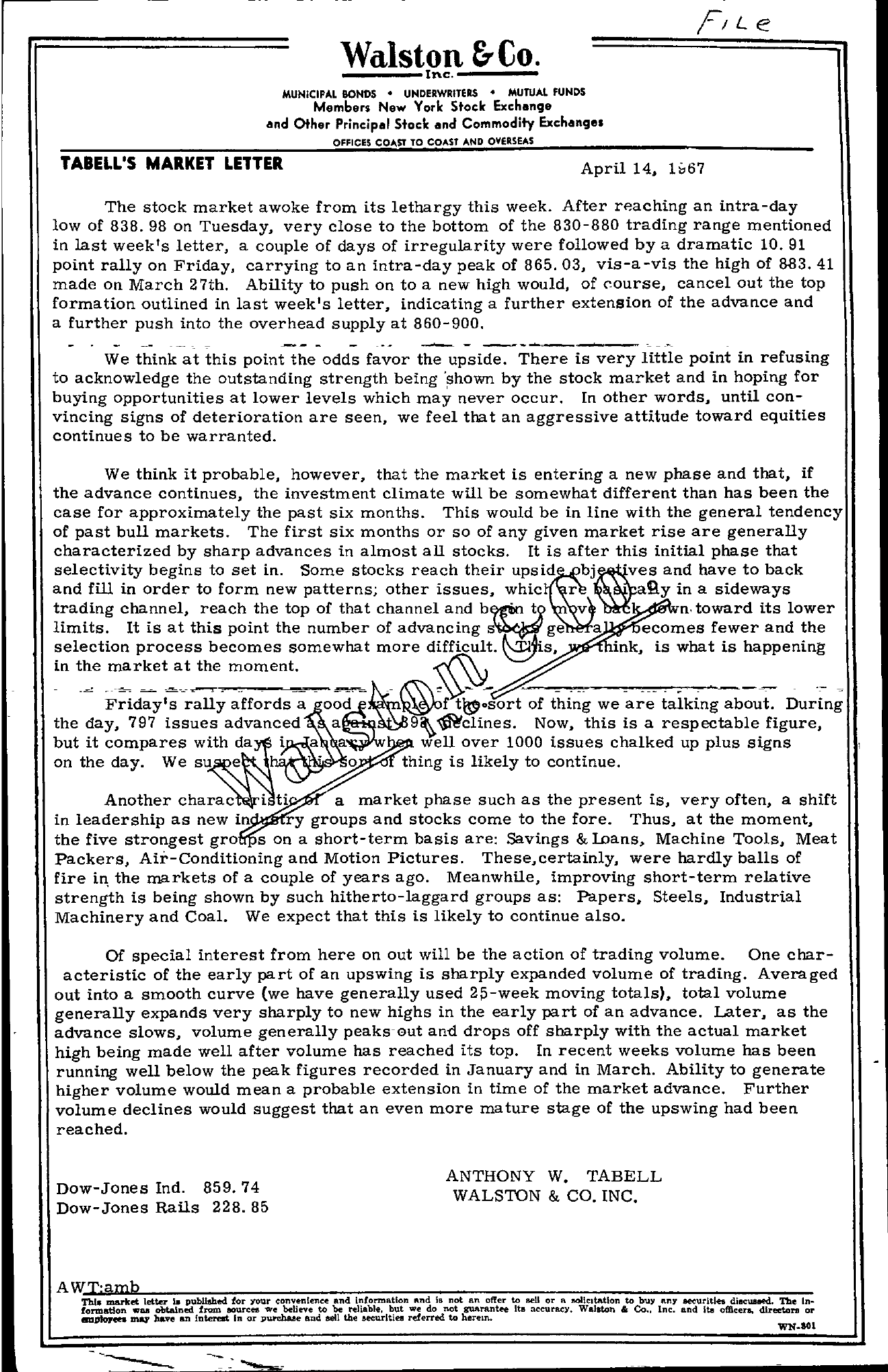 Walston &Co.;.;……;…; Inc. TABELL'S MARKET MUNICIPAL BONDS UNDERWRITERS MUTUAL fUNDS Membe.. New York Stock Exchange and Other Principal Stock and Commodity Exchanges OFFICES COA.ST TO COAST AND OVeRSEAS LETTER April 14, 1167 The stock market awoke from its lethargy this week. After reaching an intra-day low of 838.98 on Tuesday, very close to the bottom of the 830-880 trading range mentioned in last week's letter, a couple of days of irregularity were followed by a dramatic 10.91 point rally on Friday, carrying to an intra-day peak of 865.03, vis-a-vis the high of 833.41 made on March 27th. Ability to push on to a new high would, of course, cancel out the top formation outlined in last week's letter, indicating a further extension of the advance and – – – – – – -a further push into the overhead supply at 860-900. We think at this pOint the odds favor the upside. There is very little point in refusing to acknowledge the outstanding strength being by the stock market and in hoping for buying opportunities at lower levels which may never occur. In other words, until con- Vincing signs of deterioration are seen, we feel that an aggressive attitude toward equities continues to be warranted. We think it probable, however, that the market is entering a new phase and that, if the advance continues, the investment climate will be somewhat different than has been the case for approximately the past six months. This would be in line with the general tendency of past bull markets. The first six months or so of any given market rise are generally characterized by sharp advances in almost all stocks. It is after this initial phase that selectivity begins to set in. Some stocks reach their and have to back and fill in order to form new patterns; other issues, whic r Ry in a sideways trading channel, reach the top of that channel and v n, toward its lower limits. It is at this point the number of advancing ge a ecomes fewer and the selection process becomes somewhat more difficult. ink, is what is happening in moment. .. . . . . . . Friday's rally affords a the day, 797 issues advanced but it compares da i a on the day. We su e a a t\!;l0sort of thing we are talking about. During Now, this is a respectable figure, well over 1000 issues chalked up plus signs thing is likely to continue. Another charac i ti a market phase such as the present is, very often, a shift in leadership as new in ry groups and stocks come to the fore. Thus, at the moment, the five strongest gro s on a short-term basis are Savings & loans, Machine Tools, Meat Packers, Air-Conditioning and Motion Pictures. These, certainly, were hardly balls of fire il\ the markets of a couple of years ago. Meanwhile, improving short-term relative strength is being shown by such hitherto-laggard groups as Papers, Steels, Industrial Machinery and Coal. We expect that this is likely to continue also. Of special interest from here on out will be the action of trading volume. One char- acteristic of the early part of an upswing is sharply expanded volume of trading. Averaged out into a smooth curve (we have generally used moving totals), total volume generally expands very sharply to new highs in the early part of an advance. Later, as the advance slows, volume generally peaks-out anj drops off sharply with the actual market high being made well after volume has reached its top. In recent weeks volume has been running well below the peak figures recorded in January and in March. Ability to generate higher volume would mean a probable extension in time of the market advance. Further volume declines would suggest that an even more rna ture stage of the upswing had been reached. Dow-Jones Ind. 859.74 Dow-Jones Rails 228.85 ANTHONY W. TABELL WALSTON & CO. INC. AWTamb Tbt. market letter t. published for your convenience and Inlormation nd i8 not an offer to sell or 8 to buy any &eeurltlea dillcuaeed. The In- formation waa obtained from aources we believe to be reliable. hut we do not guarantee Ita aceuracy. Walston Co., Inc. and Ita ofBcer.. direetora or DUQ have an interest In or puPChaae and sell the &eeurltletl referred to herein.