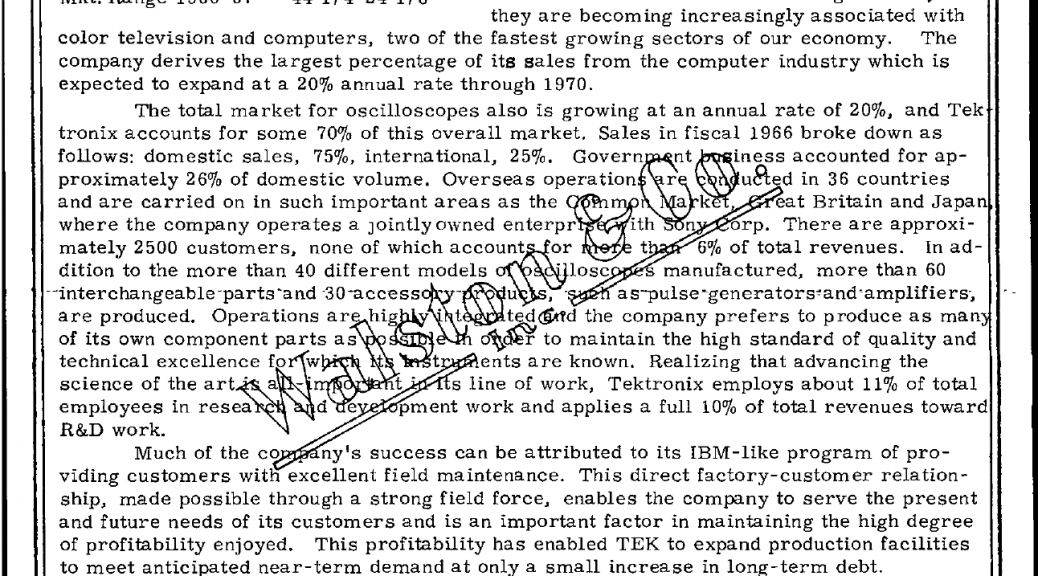 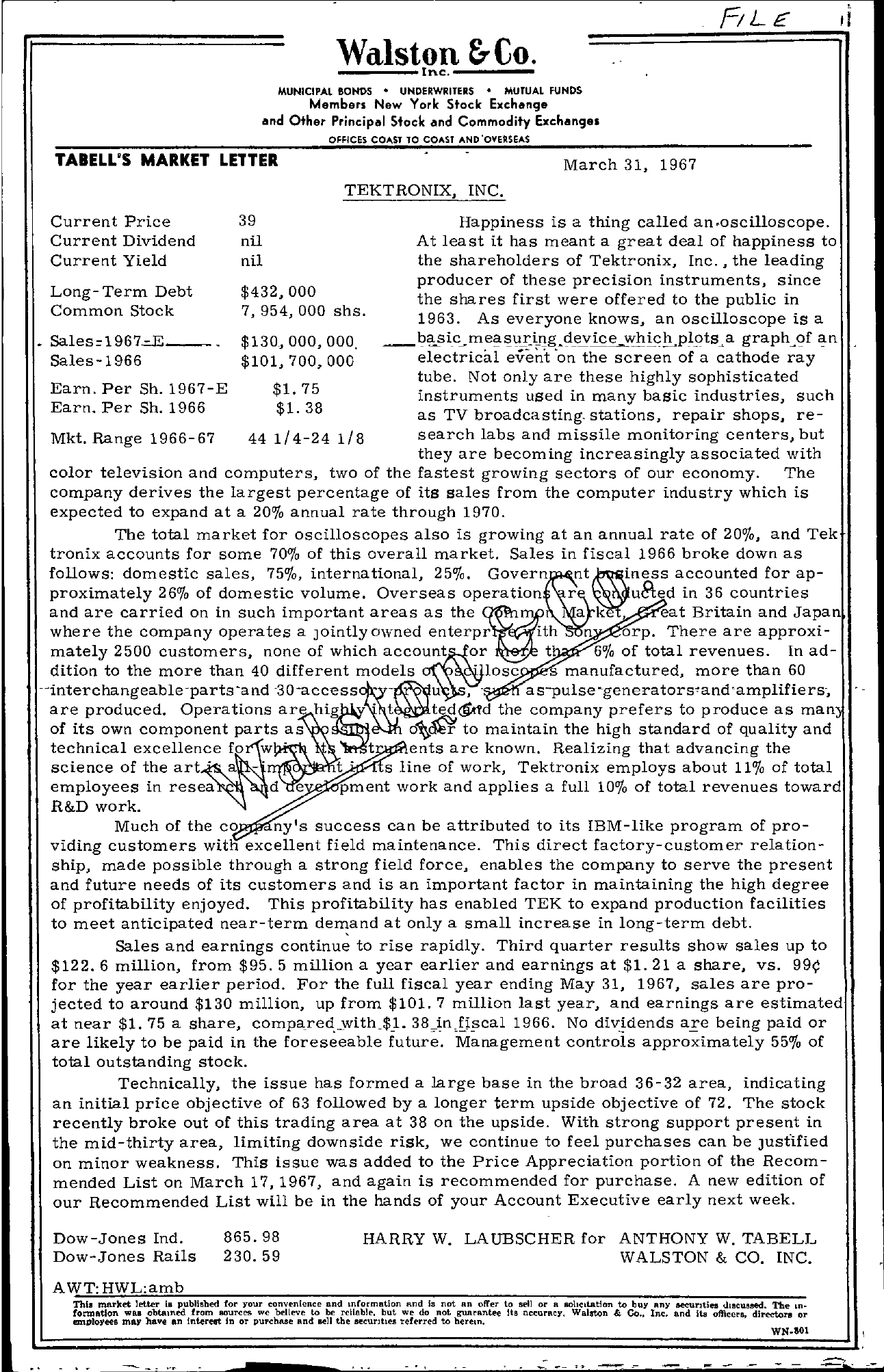 W—a-lIsntocn.-&-C–o-. MUNICIPAL BONOS UNDERWRITERS MUTUAL FUNDS Membe New York Stock Exchange and Other Principal Stock and Commodity Exchange. OFFICES Co..,ST TO COAST AND 'OVERSEAS TABELL'S MARKET LETTER March 31, 1967 TEKTRONIX, INC. Current Price 39 Happiness is a thing called an.oscilloscope. Current Dividend nil At least it has meant a great deal of happiness to Current Yield nil the shareholders of Tektronix, Inc., the leading Long- Term Debt Common Stock 432,000 7, 954, 000 shs. producer of these precision instruments, since the shares first were offered to the public in 1963. As everyone knows, an oscilloscope is a Sales1967–E Sales-1966 130,000,000. 101,700,000 Earn. Per Sh. 1967-E Earn. Per Sh. 1966 1. 75 1. 38 graphof electrical eve;'t 'on the screen of a cathode ray tube. Not only are these highly sophisticated instruments used in many basic industries, such as TV broadcasting. stations, repair shops, re- Mkt. Range 1966-67 441/4-241/8 search labs and missile monitoring centers, but they are becoming increasingly associated with color television and computers, two of the fastest growing sectors of our economy. The company derives the largest percentage of its sales from the computer industry which is expected to expand at a 200/0 annual rate through 1970. The total market for oscilloscopes also is growing at an annual rate of 200/0, and Tek tronix accounts for some 700/0 of this overall market. Sales in fiscal 1966 broke down as follows domestic sales, 750/0, international, 250/0. proximately 260/0 of domestic volume. Overseas operation r accounted for apu8ed in 36 countries and are carried on in such important areas as the a ke eat Britain and Japan where the company operates a Jointlyowned enterpr ith n orp. There are approxi- mately 2500 customers, none of which or t 60/0 of total revenues. In ad- dition to the more than 40 different models . lose manufactured, more than 60 ,- as-pulse'generators'and'-amplifiers-, are produced. Operations of its own component parts as the company prefers to produce as man to maintain the high standard of quality and technical fo science of the art a -' tents are known. Realizing that advanCing the t . s line of work, Tektronix employs about 110/0 of total employees in resea d e pment work and applies a full 100/0 of total revenues toward R&D work. Much of the co ny's success can be attributed to its IBM-like program of pro- viding customers witli excellent field maintenance. This direct factory-customer relation- ship, made possible through a strong field force, enables the company to serve the present and future needs of its customers and is an important factor in maintaining the high degree of profitability enjoyed. This profitability has enabled TEK to expand production facilities to meet anticipated near-term den;and at only a small increase in long-term debt. Sales and earnings continue to rise rapidly. Third quarter results show sales up to 122.6 million, from 95.5 million a year earlier and earnings at 1. 21 a share, vs. 99 for the year earlier period. For the full fiscal year ending May 31, 1967, sales are pro- jected to around 130 million, up from 101. 7 million last year, and earnings are estimated at near 1. 75 a share, compared.withJ. 38)nJJ!3cal 1966. No being paid or are likely to be paid in the foreseeable future. Management controls approximately 550/0 of total outstanding stock. Technically, the issue has formed a large base in the broad 36-32 area, indicating an initial price objective of 63 followed by a longer term upside objective of 72. The stock recently broke out of this trading area at 38 on the upside. With strong support present in the mid-thirty area, limiting downside risk, we continue to feel purchases can be Jusfified on minor weakness. This issue was added to the Price Appreciation portion of the Recom- mended List on March 17,1967, and again is recommended for purchase. A new edition of our Recommended List will be in the hands of your Account Executive early next week. Dow-Jones Ind. 865.98 Dow-Jones Rails 230.59 HARRY W. LAUBSCHER for ANTHONY W. TABELL WALSTON & CO. INC. A WT HWLamb Thil market letter is published for your convenience and mformation and Is not an offer to sell or a soilCIt.a.tion to huy any &eC!unties dillcussed. The Information was obtained from 80urces we believe to be reliable. but we do not guarantee Its nccufacy, Walston & Co., Inc. and Its officers, dlreetorll or emploYeeB may bave an Interest in or purchase and sell the seeurltles referred to herelll.