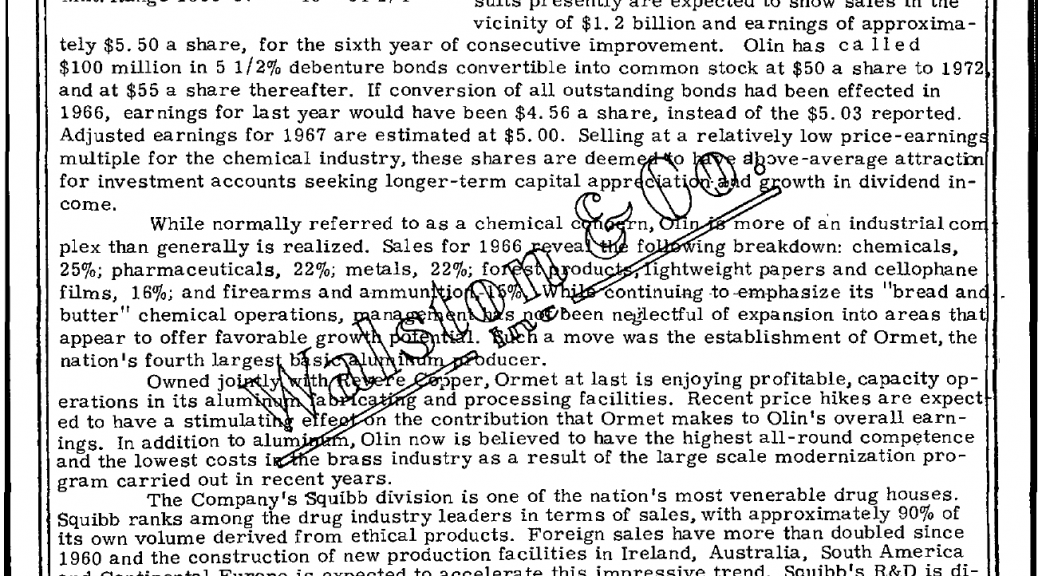 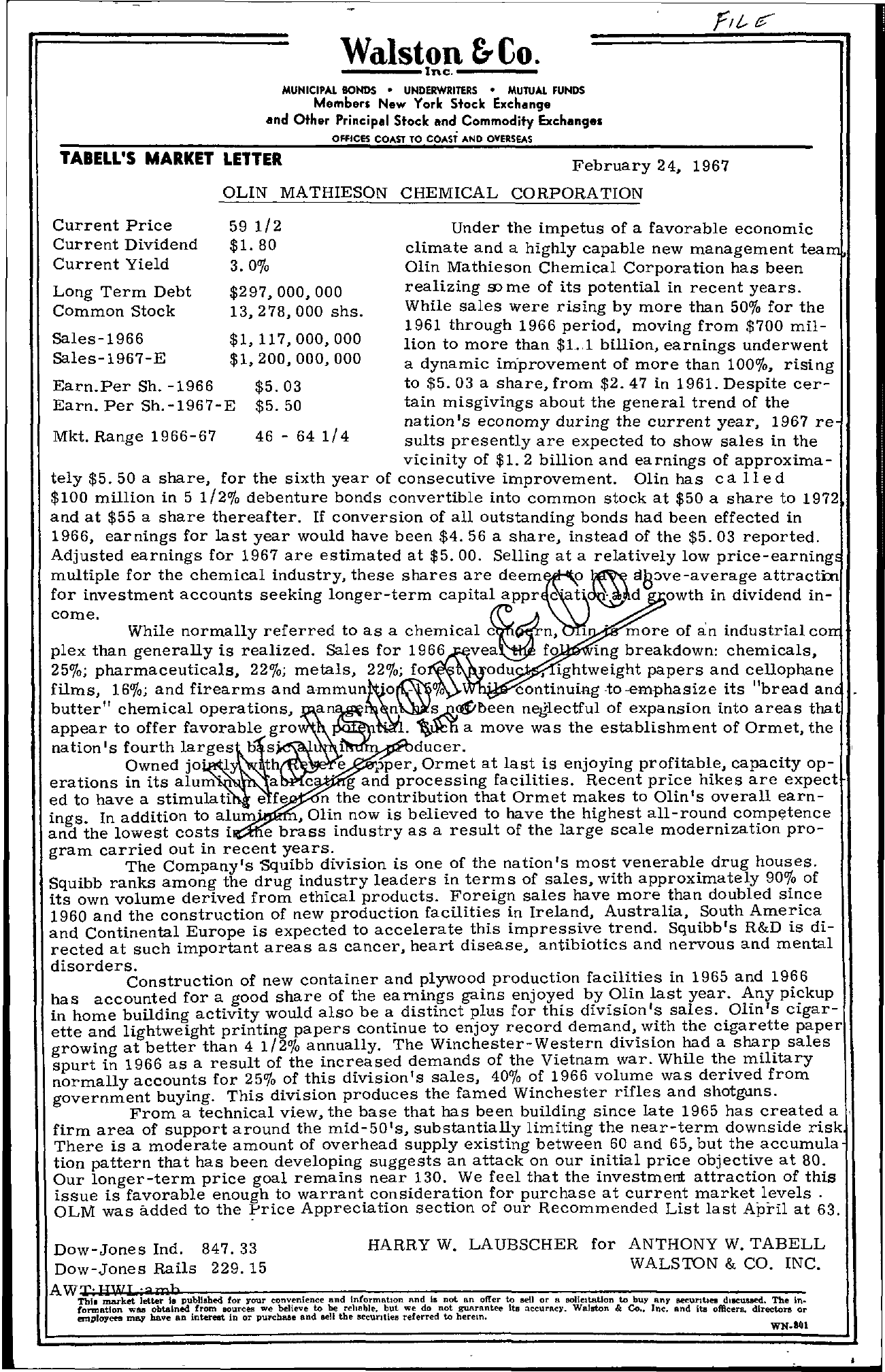 Walston &- Co. Inc. ;….-….;……;..; MUNICIPAL BONDS UNDERWRITERS MUTUAL FUNDS Members New York Stock Exchange and Other Principal Stock and. Commodity Exchange. TABELL'S MARKET LETTER OFFICES COAST TO COAST AND OVERSEAS February 24, 1967 OLIN MATHIESON CHEMICAL CORPORATION Current Price Current Dividend Current Yield 59 1/2 1. 80 3. 0 Under the impetus of a favorable economic climate and a highly capable new management tea Olin Mathieson Chemical Corporation has been Long Term Debt Common Stock Sales-1966 Sales-1967-E 297,000,000 13, 278, 000 shs. 1,117,000,000 1,200,000,000 realizing s me of its potential in recent years. While sales were rising by more than 50 for the 1961 through 1966 period, moving from 700 million to more than 1..1 billion, earnings underwent a dynamic improvement of more than 100, rising Earn.Per Sh. -1966 Earn. Per Sh.-1967-E Mkt. Range 1966-67 5.03 5. 50 46 – 64 1/ 4 to 5.03 a share, from 2.47 in 1961. Despite certain misgivings about the general trend of the nation's economy during the current year, 1967 re sults presently are expected to show sales in the vicinity of 1. 2 billion and earnings of approxima- tely 5. 50 a share, for the sixth year of consecutive improvement. Olin has call e d 100 million in 5 1/2 debenture bonds convertible into common stock at 50 a share to 1972 and at 55 a share thereafter. If conversion of all outstanding bonds had been effected in 1966, earnings for last year would have been 4. 56 a share, instead of the 5.03 reported. Adjusted earnings for 1967 are estimated at 5.00. Selling at a relatively low price-earning multiple for the chemical industry, these shares are aalVe-average attractin accounts seeking longer-term c owth in dividend in- While normally referred to as a chemical c n, 1 . more of an industrial co plex than generally is realized. Sales for 1966 vea fo ing breakdown chemicals, 25; pharmaceuticals, 22; metals, 22; fo odu, ightweight papers and cellophane films, 16; and firearms and . continuing to-emphasize its bread an butter chemical an neglectful of expansion into areas tha appear to offer favorable gro . . a move was the establishment of Ormet, the nation's fourth larges Jj s 1 ducer. Owned jo 1 th e ,1per, Ormet at last is enjoying profitable, capacity op- erations in its alum a c . g and processing facilities. Recent price hikes are expect ed to have a stimulati e fe n the contribution that Ormet makes to Olin's overall earn- ings. In addition to alum ,Olin now is believed to have the highest all-round competence and the lowest costs i e brass industry as a result of the large scale modernization pro- gram carried out in recent years. The Company's Squibb division is one of the nation's most venerable drug houses. Squibb ranks among the drug industry leaders in terms of sales, with approximately 90 of its own volume derived from ethical products. Foreign sales have more than doubled since 1960 and the construction of new production facilities in Ireland, Australia, South America and Continental Europe is expected to accelerate this impressive trend. Squibb's R&D is directed at such important areas as cancer, heart disease, antibiotics and nervous and mental disordersC. onstruction of new container and plywood production facilities in 1965 and 1966 has accounted for a good share of the earnings gains enjoyed by Olin last year. Any pickup in home building activity would also be a distinct jJlus for this sales..Olin's cigar- ette and lightweight printing papers continue to enJoy record demand, wlth the clgarette paper growing at better than 4 1/2 annually. The division ad a sha.rp sales spurt in 1966 as a result of the increased demands of the Vletnam war. Whlle mll1tary normally accounts for 25 of this division's sales, 40 of 1966 volume was denved from government buying. This division produces the famed Winchester rifles and shotguns. From a technical view, the base that has been building since late 1965 has created a firm area of support around the mid-50's, substantially limiting the near-term downside risk There is a moderate amount of overhead supply existing between 60 and 65, but the accumula tion pattern that has been developing suggests an attack on our initial price objective at 80. Our longer-term price goal remains near 130. We feel that the investment attraction of this issue is favorable enough to warrant consideration for purchase at current market levels. OLM was added to the Price Appreciation section of our Recommended List last April at 63. Dow-Jones Ind. 847.33 Dow-Jones Rails 229.15 HARRY W. LAUBSCHER for ANTHONY W. TAB ELL WALSTON & CO. INC. AWT' HH'L mbTbl. market -le3tter III published for your convenience llnd inlormatlon And Is not an offer to sell or a IIOlicltation to buy any 8e(!UflUea dlacuued. The Information was obtained from 8ouree!! we believe to be rellahle. but we do not gutl.rRntee Its accuracy. Walston & Co.. Inc. and its officers, dlrecton or employees may have an interest in or pU1'cbaee and sell the 8eCUrities referred to herein.