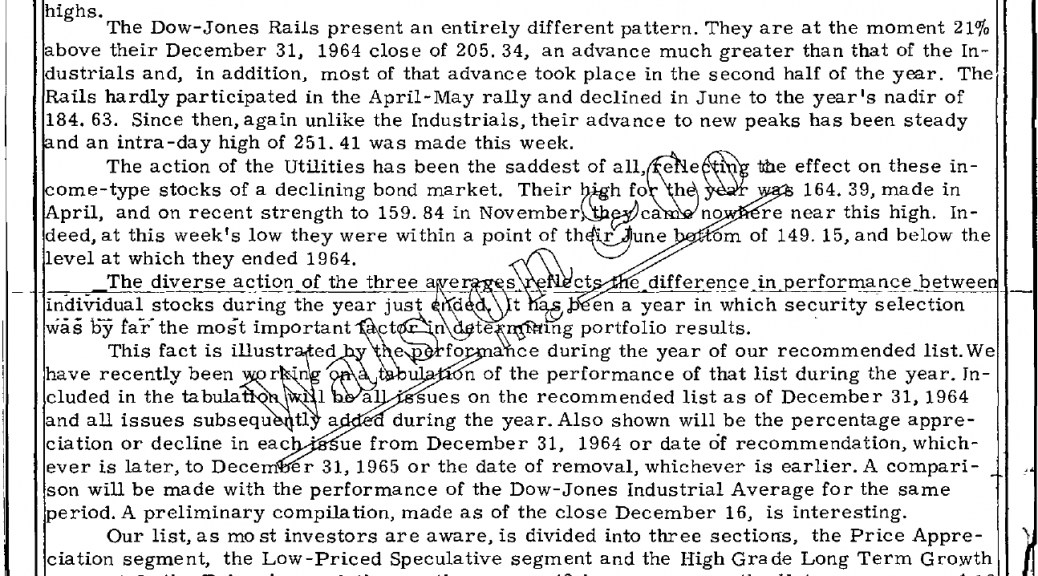 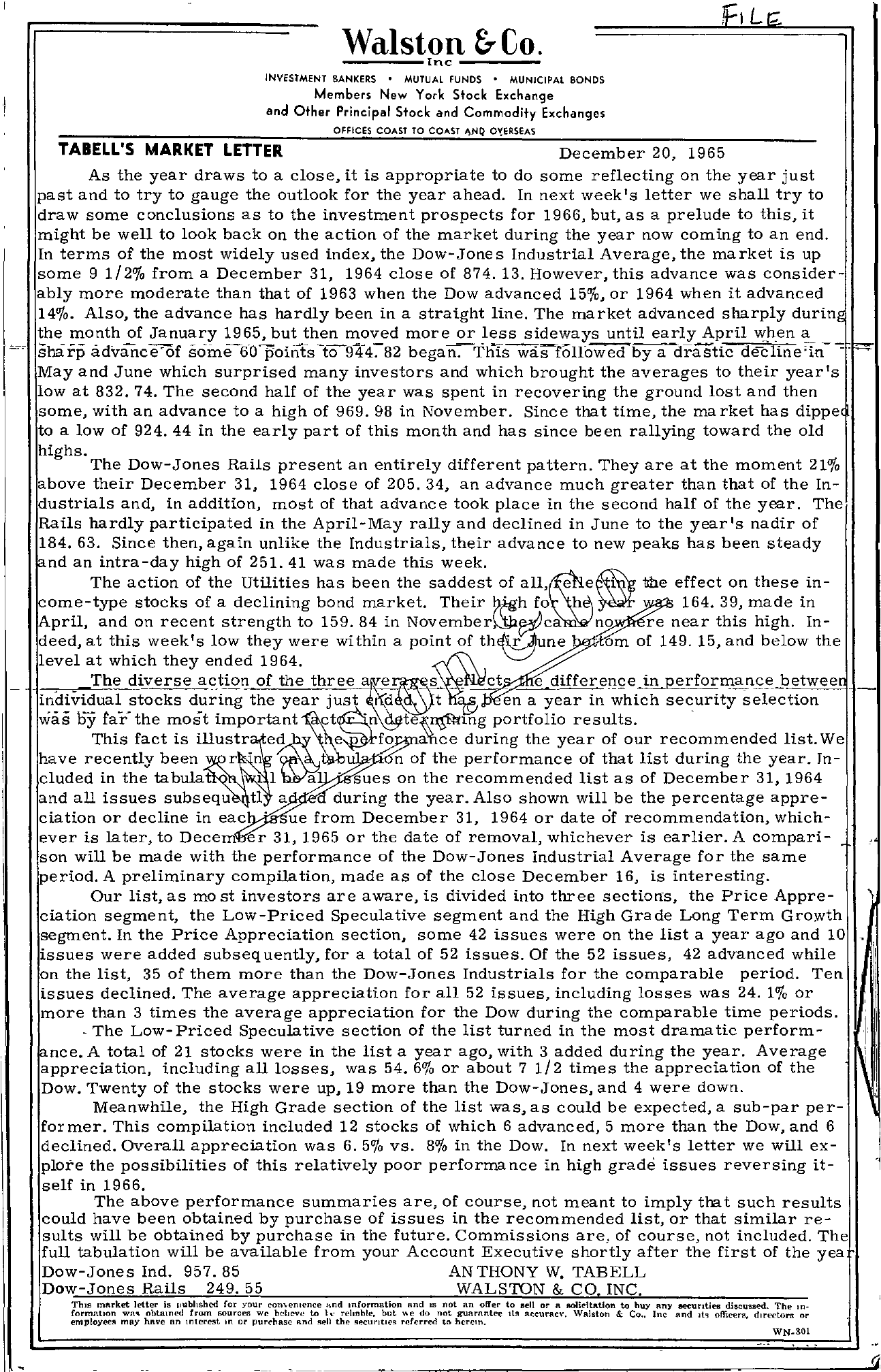 Walston &- Co. —–lnc —– INVESTMENT BANKERS MUTUAL FUNDS MUNICIPAL BONDS Members New York Stock Exchange and Other Principal Stock and Commodity Exchanges OFFICES COAST TO COAST O,ERSEAS TABEll'S MARKET lETTER December 20, 1965 As the year draws to a close, it is appropriate to do some reflecting on the year just past and to try to gauge the outlook for the year ahead. In next week's letter we shall try to draw some conclusions as to the investment prospects for 1966, but, as a prelude to this, it might be well to look back on the action of the market during the year now coming to an end. In terms of the most widely used index, the Dow-Jones Industrial Average, the market is up some 9 1/2 from a December 31, 1964 close of 874. 13. However, this advance was consider- ably more moderate than that of 1963 when the Dow advanced 15, or 1964 when it advanced 14. Also, the advance has hardly been in a straight line. The market advanced sharply durin the month of January 1965, but then moved more or less sideways until early April w)ten a — shirj) advanceoof someoO poinfs-to944-82 wasfollowectbya drastic decline1n— May and June which surprised many investors and which brought the averages to their year's low at 832.74. The second half of the year was spent in recovering the ground lost and then some, with an advance to a high of 969. 98 in November. Since that time, the market has dippe to a low of 924.44 in the early part of this month and has since been rallying toward the old highs. The Dow-Jones Rails present an entirely different pattern. They are at the moment 21 above their December 31, 1964 close of 205. 34, an advance much greater than that of the In- dustrials and, in addition, most of that advance took place in the second half of the year. The Rails hardly participated in the April-May rally and declined in June to the year's nadir of 184. 63. Since then, again unlike the Industrials, their advance to new peaks has been steady nd an intra-day high of 251. 41 was made this week. The action of the Utilities has been the saddest of the effect on these in- come-type stocks of a declining bond market. Their 9,igh fo h 164. 39, made in pril, and on recent strength to 159.84 in no re near this high. In- deed, at this week's low they were within a point of om of 149.15, and below the level at which they ended 1964. The diverse actJon of the three ct the year just en a year in which security selection was liy tar the most portfolio results. This fact is illustr have recently been r -n a\fice during the year of our recommended list. We n of the performance of that list during the year. In- cluded in the tabula 1 I a – sues on the recommended list as of December 31,1964 tl a during the year. Also shown will be the percentage appre- ciation or decline in eac ue from December 31, 1964 or date of recommendation, which- ever is later, to Dece er 31, 1965 or the date of removal, whichever is earlier. A compari- son will be made with the performance of the Dow-Jones Industrial Average for the same period. A preliminary compilation, made as of the close December 16, is interesting. Our list, as mo st investors are aware, is divided into three sections, the Price Appre- \ ciation segment, the Low-Priced Speculative segment and the High Grade Long Term Growth segment. In the Price Appreciation section, some 42 issues were on the list a year ago and 10 issues were added subseq uently, for a total of 52 issues. Of the 52 issues, 42 advanced while II IOn the list, 35 of them more than the Dow-Jones Industrials for the comparable period. Ten I' issues declined. The average appreciation for all 52 issues, including losses was 24. 1 or I more than 3 times the average appreciation for the Dow during the comparable time periods. – The Low-Priced Speculative section of the list turned in the most dramatic perform- nce. A total of 21 stocks were in the list a year ago, with 3 added during the year. Average appreciation, including all losses, was 54. 6 or about 7 1/2 times the appreciation of the Dow. Twenty of the stocks were up, 19 more than the Dow-Jones, and 4 were down. Meanwhile, the High Grade section of the list was, as could be expected, a sub-par per- former. This compilation included 12 stocks of which 6 advanced, 5 more than the Dow, and 6 declined. Overall appreciation was 6.5 vs. 8 in the Dow. In next week's letter we will ex- plore the possibilities of this relatively poor perforrna nce in high grade issues reverSing it- self in 1966. The above performance summaries are, of course, not meant to imply that such results could have been obtained by purchase of issues in the recommended list, or that similar results will be obtained by purchase in the future. Commissions are, of course, not included. The full tabulation will be available from your Account Executive shortly after the first of the yea Dow-Jones Ind. 957.85 Dow-Jones Rails 249. 55 ANTHONY W. TAB ELL WALSTON & CO. INC. ThIs rnl'lrket letter is IJuhhshcd for )'our eon'l.cnlcnce nd Information Rnd IS not an offel to lIel! or R 8oli('ltAtion to buy Rny IleCUrltietl discussed. Tht' informatIOn wa … obtained from sources we believe to 1… reliable. but …. e do not guarantee Its necurRC\ Walston & Co.. Inc and officers, directors or may have an Interest. In or pUr('hnse and sell the secUrities rderred to herein.