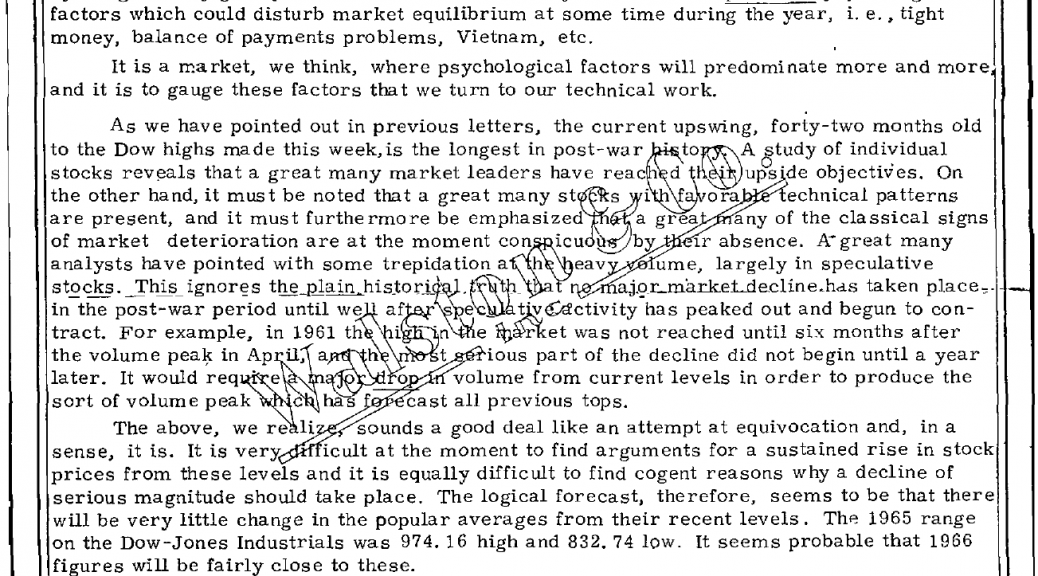 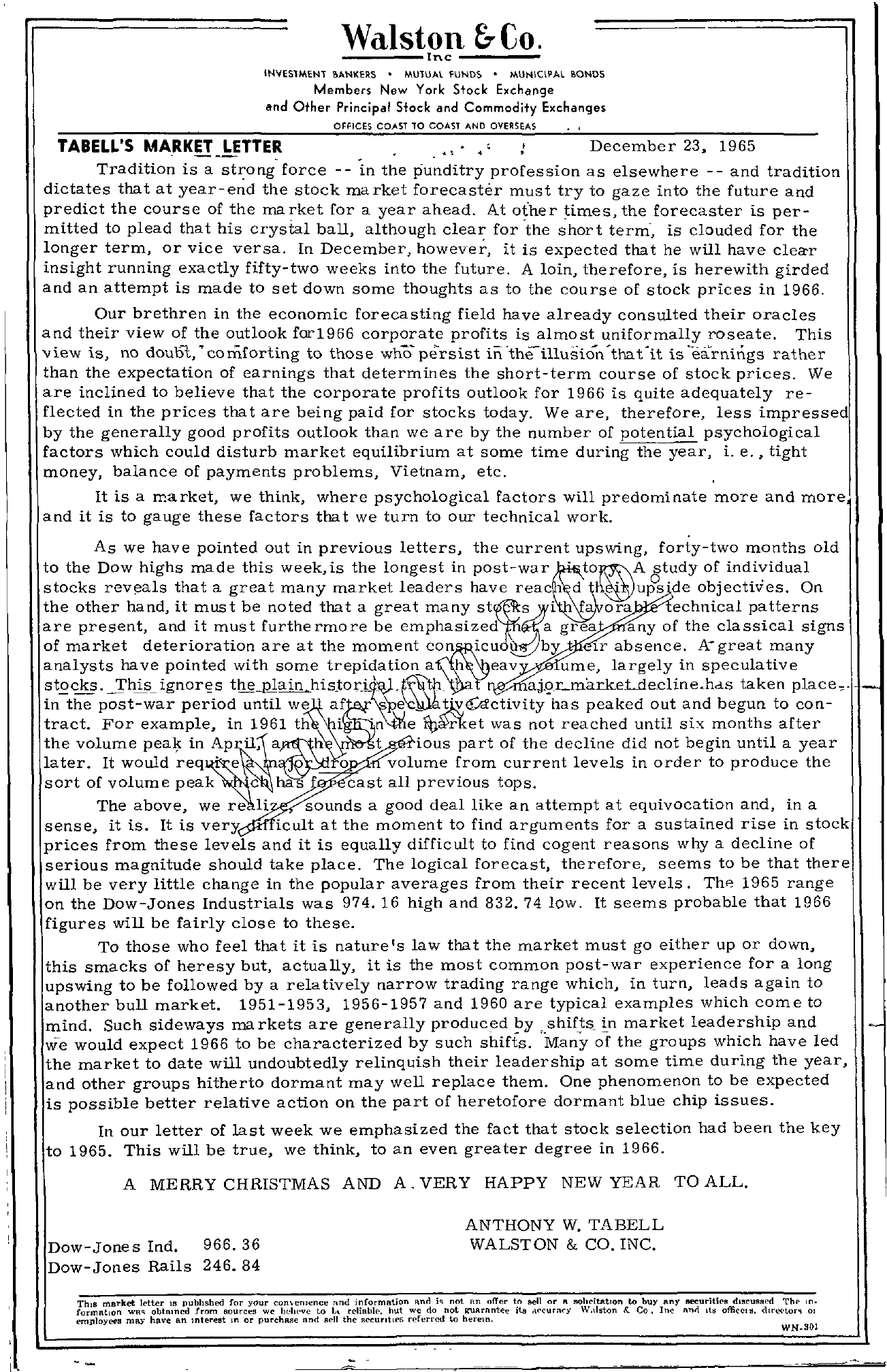 Walston &Co. Inc INVESlMENl BANKHS MUlUAl fUNDS MUNICIPAL SONOS Members New York Stock Exchange and Other Principal Stock and Commodity Exchanges TABELL'S MARKET LETTER c OFfiCES COAST TO COAST AND OVERSEAS ., December 23, 1965 Tradition is a strong force – – in the punditry profession as elsewhere – – and tradition dictates that at year-end the stock ma rket forecaster must try to gaze into the future and predict the course of the rna rket for a year ahead. At other times, the forecaster is per- mitted to plead that his crystal ball, although clear for 'the short term, is clouded for the longer term, or vice versa, In December, however, it is expected that he will have clea-r insight running exactly fifty-two weeks into the future, A lOin, therefore, is herewith girded and an attempt is made to set down some thoughts as to the course of stock prices in 1966, Our brethren in the economic forecasting field have already consulted their oracles and their view of the outlook for1966 corporate profits is almost uniformally roseate. This view is, no dount, – comforting to those who' persist in 'theillusion'that'it is earnings rather than the expectation of earnings that determines the short-term course of stock prices, We are inclined to believe that the corporate profits outlook for 1966 is quite adequately reflected in the prices that are being paid for stocks today. We are, therefore, less impressed by the generally good profits outlook than we are by the number of potential psychological factors which could disturb market equilibrium at some time during the year, i. e., tight money, balance of payments problems, Vietnam, etc. It is a market, we think, where psychological factors will predominate more and more and it is to gauge these factors tha t we turn to our technical work. As we have pointed out in previous letters, the current upswing, forty-two months old to the Dow highs made this week, is the longest in study of individual stocks reveals that a great many market leaders have reac d hwus'de objectives. On the other hand, it must be noted that a great many are present, and it must furthermore be emphasized of market deterioration are at the moment icu u analysts have pointed with some trepidation a h eav fa ora echnical patterns a grea any of the classical signs by lr absence. A- great many ume, largely in speculative stQcks. –,!,his theRlain taken place,- in the post-war period until has peaked out and begun to con- tract. For example, in 1961 th i 'n e lta–rket was not reached until six months after the volume il, later. It would req . e sort of volume peak c M t ious part of the decline did not begin until a year 0 volume from current levels in order to produce the cast all previous tops. The above, we re Ii sounds a good deal like an attempt at equivocation and, in a sense, it is. It is very; icult a t the moment to find arguments for a sustained rise in stock prices from these levels and it is equally difficult to find cogent reasons why a decline of serious magnitude should take place. The logical forecast, therefore, seems to be that there will be very little change in the popular averages from their recent levels. Th 1965 range on the Dow-Jones Industrials was 974.16 high and 832.74 low, It seems probable that 1966 figures will be fairly close to these. To those who feel that it is nature's law that the market must go either up or down, this smacks of heresy but, actually, it is the most common post-war experience for a long upswing to be followed by a relatively narrow trading range which, in turn, leads again to another bull market. 1951-1953, 1956-1957 and 1960 are typical examples which come to mind. Such sideways rna rkets are generally produced y in market leadership and we would expect 1966 to be characterized by such shifts. Many of the groups which have led the market to date will undoubtedly relinquish their leadership at some time during the year, and other groups hitherto dormant may well replace them. One phenomenon to be expected is possible better relative action on the part of heretofore dormant blue chip issues. In our letter of last week we emphasized the fact that stock selection had been the key to 1965. This will be true, we think, to an even greater degree in 1966. A MERRY CHRISTMAS AND A. VERY HAPPY NEW YEAR TO ALL. Dow-Jone sInd. 966. 36 Dow-Jones Rails 246. 84 ANTHONY W. TABELL WALSTON & CO. INC. ThIS market letter 18 pubhshed for your concmence rind information Rnn i; not an offer tl'l sell or R soIU'tIltlon to buy any Beeuritle1l diSCUS9ed Thp In formntlOn WI\'I obtained from sourc\!s we bel)('ve to L\ reliable, hut w(! do not guarantee its ,\('('urney W,llston 8.. Co, Ine nnn Its offi('ci s, dlrL''Wr'l 01 emJlioyees rna)' hnve an mterest In or purchase Rnd sell the secuntu's referred to herem. WN301