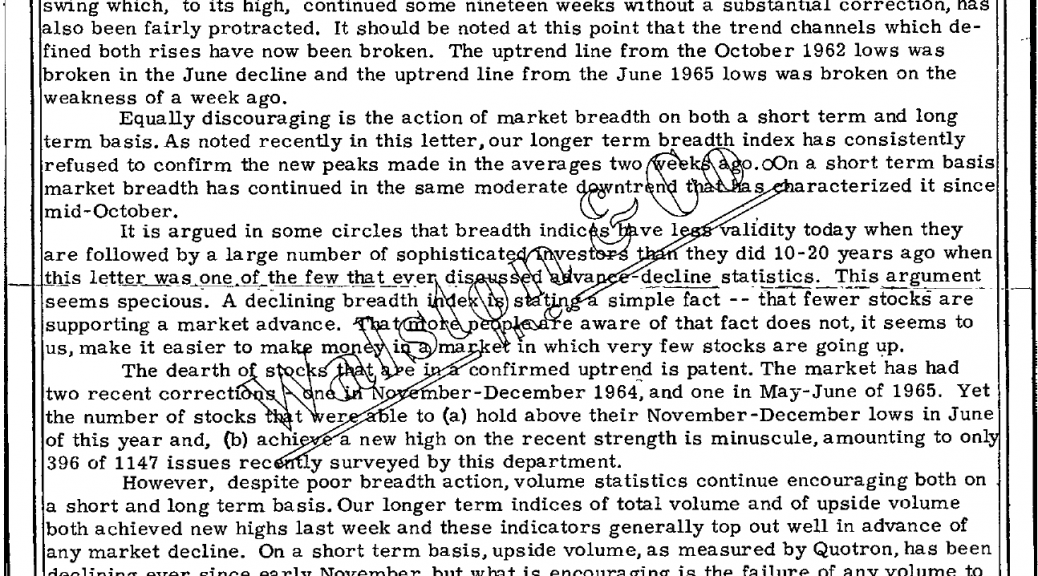 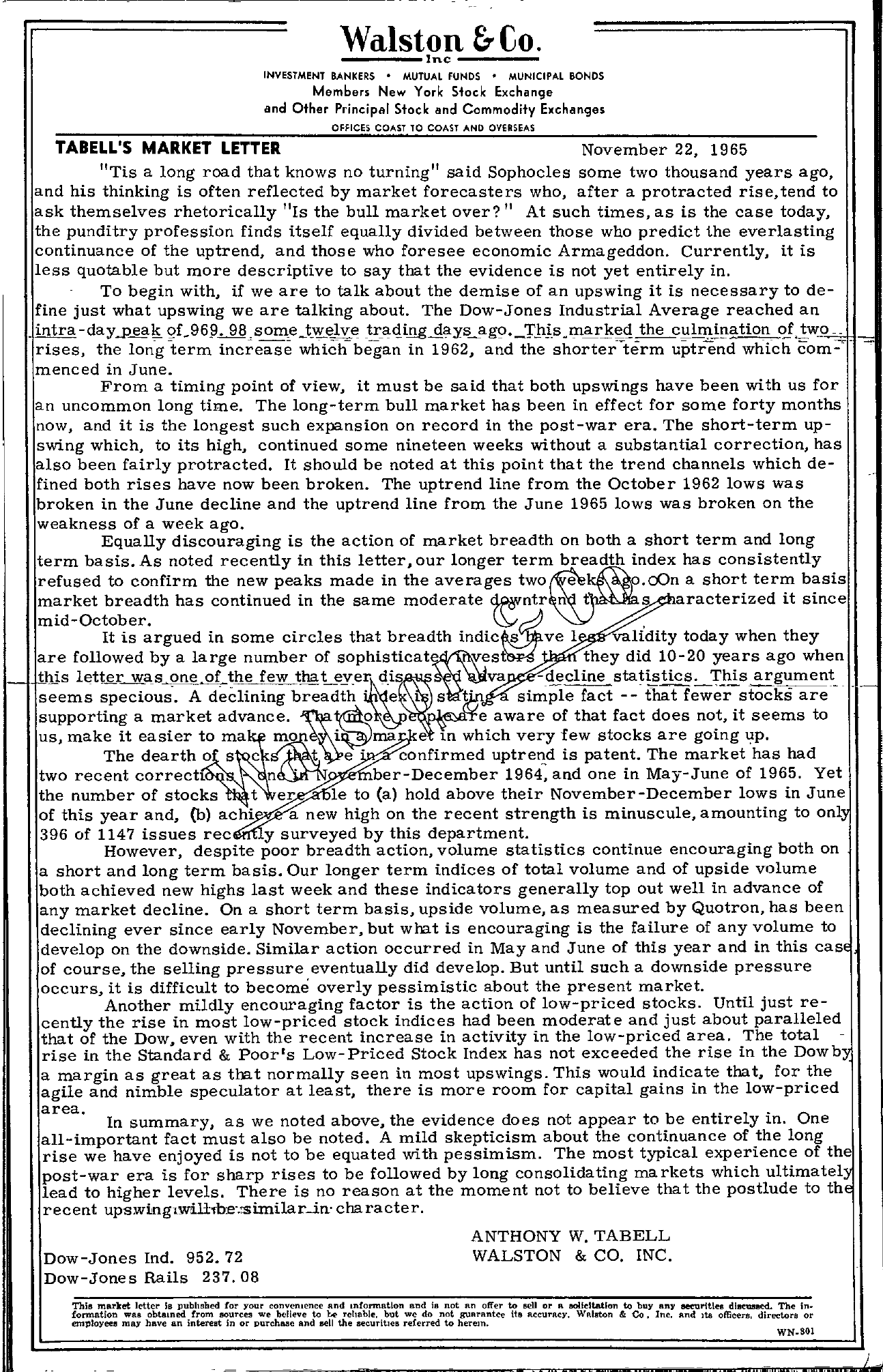 ,——— ————– Walston &- Co. —–Inc INVESTMENT BANKERS MUTUAL FUNDS MUNICIPAL BONOS Members New York Stock Exchange and Other Principal Stock and Commodity Exchanges OFFICES COAST TO COAST AND OVERSEAS TABELL'S MARKET LETTER November 22, 1965 Tis a long road that knows no turning said Sophocles some two thousand years ago, and his thinking is often reflected by market forecasters who, after a protracted rise, tend to ask themselves rhetorically Is the bull market over At such times, as is the case tOday, the punditry profession finds itself equally divided between those who predict the everlasting continuance of the uptrend, and those who foresee economic Armageddon. Currently, it is less quotable but more descriptive to say that the evidence is not yet entirely in. To begin with, if we are to talk about the demise of an upswing it is necessary to define just what upswing we are talking about. The Dow-Jones Industrial Average reached an intra -day-pea!s. 2C96fl. 98 the culmination of.!\\7p-, rises, the long term increase which began in 1962, and the shorter–term uptrend which com- menced in June. From a timing point of view, it must be said that both upswings have been with us for an uncommon long time. The long-term bull market has been in effect for some forty months now, and it is the longest such expansion on record in the post-war era. The short-term up- swing which, to its high, continued some nineteen weeks without a substantial correction, has also been fairly protracted. It should be noted at this point that the trend channels which defined both rises have now been broken. The uptrend line from the October 1962 lows was broken in the June decline and the uptrend line from the June 1965 lows was broken on the weakness of a week ago. Equally discouraging is the action of market breadth on both a short term and long term basis. As noted recently in this letter, our longer term breadth index has consistently refused to confirm the new peaks made in the averages market breadth has continued in the same moderate cWovntr n t o.cOn a short term basis s aracterized it since mid-October. It is argued in some circles that breadth indic s ve I validity today when they are followed by a large number of they did 10-20 years ago when ibis letter of the few va -decline argument seems specious. A declining breadth – e 1 s t- simple fact — that fewer stocks are supporting a market advance. e aware of that fact does not, it seems to us, make it easier to ma e In which very few stocks are going I1P. The dearth 0 s c e – confirmed uptrend is patent. The market has had two recent correch n- ber-December 196 and one in May-June of 1965. Yet the number of stocks er Ie to (a) hold above their November-December lows in June of this year and, (b) achi a new high on the recent strength is minuscule, amounting to on1 396 of 1147 issues rec y surveyed by this department. However, despite poor breadth action, volume statistics continue encouraging both on a short and long term basis. Our longer term indices of total volume and of upside volume both achieved new highs last week and these indicators generally top out well in advance of any market decline. On a short term basis, upside volume, as measured by Quotron, has been declining ever since early November, but what is encouraging is the failure of any volume to develop on the downside. Similar action occurred in May and June of this year and in this cas of course, the selling pressure eventually did develop. But until such a downside pressure occurs, it is difficult to become overly pessimistic about the present market. Another mildly encouraging factor is the action of low-priced stocks Until just re- cently the rise in most low-priced stock indices had been moderate and just about paralleled that of the Dow, even with the recent increase in activity in the low-priced area. The total rise in the Standard & Poor's Low-Priced Stock Index has not exceeded the rise in the Dowb a margin as great as that normally seen in most upswings This would indicate that, for the agile and nimble speculator at least, there is more room for capital gains in the low-priced area. In summary, as we noted above, the evidence does not appear to be entirely in. One all-important fact must also be noted. A mild skepticism about the continuance of the long rise we have enjoyed is not to be equated with pessimism. The most typical experience of the post-war era is for sharp rises to be followed by long consolidating markets which ultimate1 lead to higher levels. There is no reason at the moment not to believe that the postlude to th recent upswinglwilh-be-,similar..in character. Dow-Jones Ind. 952.72 Dow-Jones Rails 237.08 ANTHONY W. TABELL WALSTON & CO. INC. This market letter is published for your convenience And anformatlon and Is not an offer to sell or … solieltatlon to buy Rny eeeurities dlscWl8ed. The information was obtamed.from 80urces we bdieve to bE- rehable, but we do not guRrantee its accuracy. WRiston & Co, Inc, and lts offieers, directors or emJ'loyeel!l may have an mtereat in or purchase and sell the securltles referred to herem. WNSOI — – –