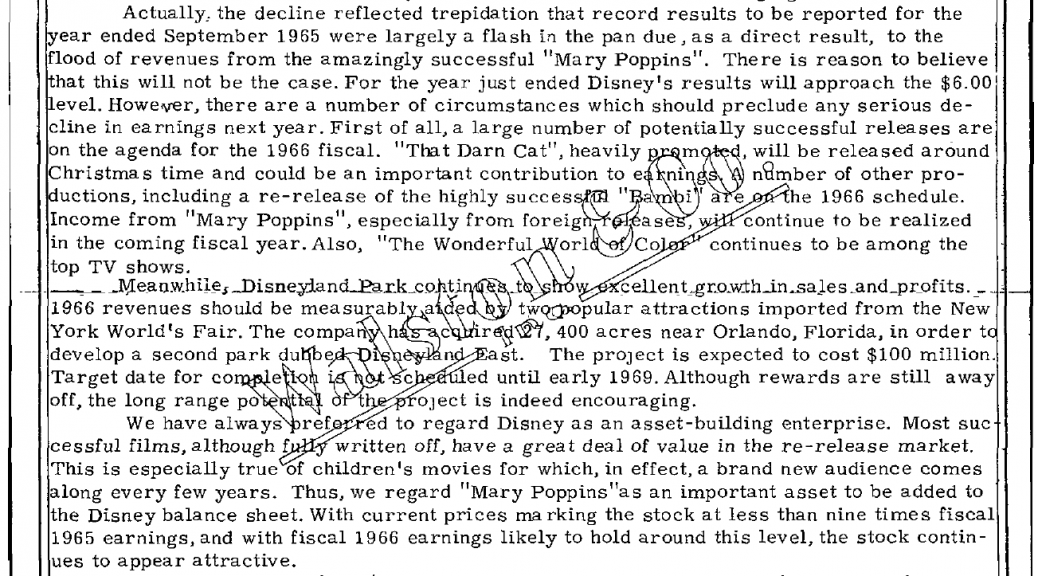 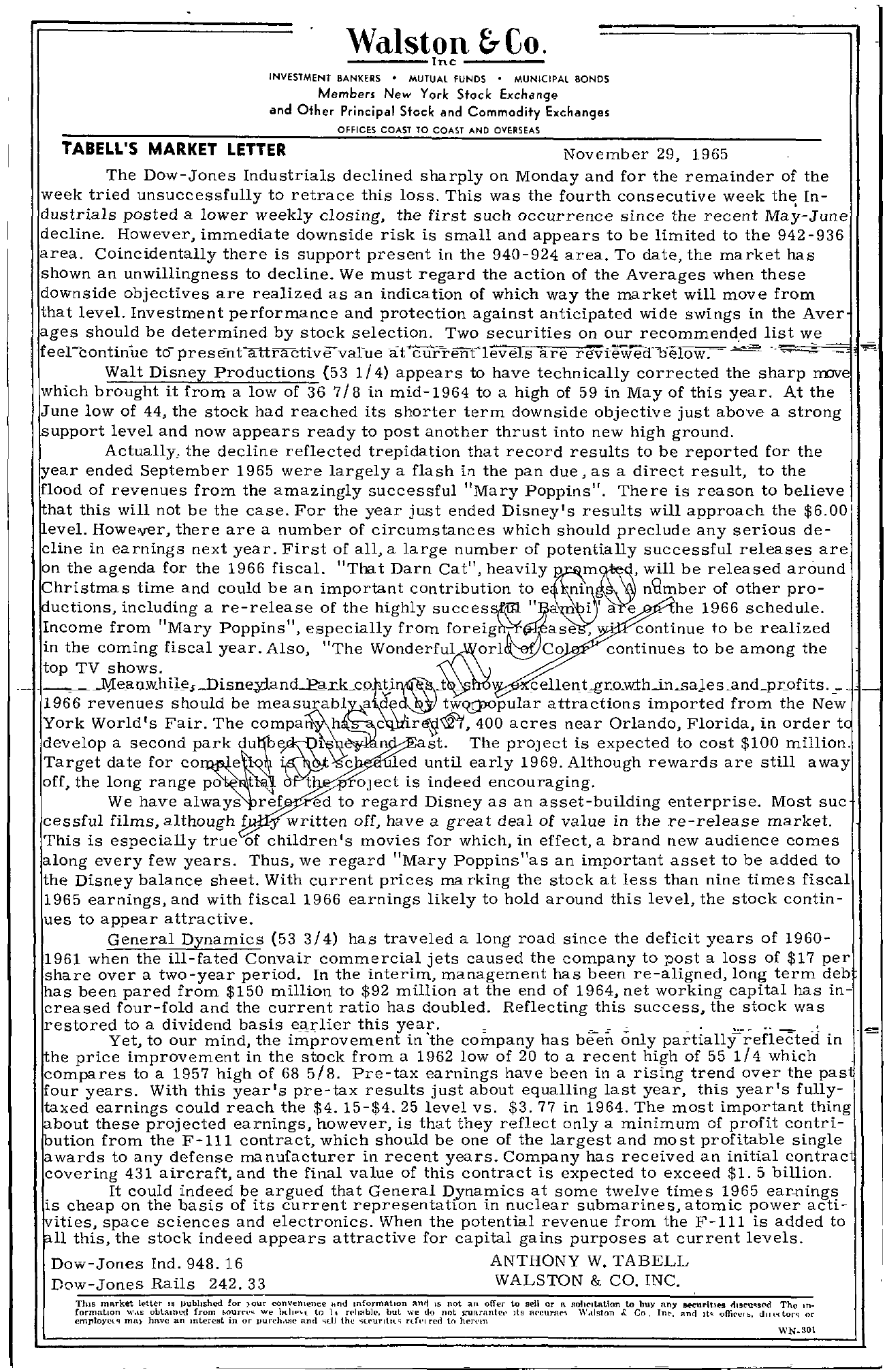 Walston &- Co. Inc INVESTMENT BANKERS MUTUAL fUNDS MUNiCIPAL 80NOS Members New York Stock Exchange and Other Principal Stock and Commodity Exchanges OFFICES COAST TO COAST AND OVERSEAS TABELL'S MARKET LETTER November 29, 1965 The Dow-Jones Industrials declined sharply on Monday and for the remainder of the week tried unsuccessfully to retrace this loss. This was the fourth consecutive week the In- dustrials posted a lower weekly closing, the first such occurrence since the recent May-June decline. However, immediate downside risk is small and appears to be limited to the 942 -936 area. Coincidentally there is support present in the 940-924 area. To date, the market has shown an unwillingness to decline. We must regard the action of the Averages when these downside objectives are realized as an indication of which way the market will move from that level. Investment performance and protection against anticipated wide swings in the Aver ages should be determined by stock selection. Two securities on our recommended list we 'feel-continue to- pres entattra ctivevarue afcurrenrleveIs are revteweirbelow. .. . .,. Walt Disney Productions (53 1/4) appears to have technically corrected the sharp mJV'e which brought it from a low of 36 7/8 in mid-1964 to a high of 59 in May of this year. At the June low of 44, the stock had reached its shorter term downside objective just above a strong support level and now appears ready to post another thrust into new high ground. Actually, the decline reflected trepidation that record results to be reported for the ear ended September 1965 were largely a flash i'1 the pan due, as a direct result, to the flood of revenues from the amazingly successful Mary Poppins. There is reason to believe that this will not be the case. For the year just ended Disney's results will approach the 6.00 evel. HoweV r, there are a number of circumstances which should preclude any serious de- cline in earnings next year. First of all, a large number of potentially successful releases are on the agenda for the 1966 fiscal. That Darn Cat, Christma s time and could be an important contribution to e ni will be released around nt/mber of other pro- uctions, including a re-release of the highly a i ' a e he 1966 schedule. Income from Mary Poppins, especially from foreig ase,' continue to be realized in the coming fiscal year. Also, The orl Co continues to be among the top TV shows. . .. . . cellen .and.pLofits .. 1966 revenues should be attractions imported from the New York World's Fair. The 400 acres near Orlando, Florida, in order t develop a second park du n ast. The proJect is expected to cost 100 million. Target date for co e . c ed until early 1969. Although rewards are still away off, the long range po t oJ ect is indeed encouraging. We have always ref ed to regard Disney as an asset-building enterprise. Most suc cessful films, although f written off, have a grea t deal of value in the re-release market. This is especially true of children's movies for which, in effect, a brand new audience comes along every few years. Thus, we regard Mary Poppinsas an important asset to be added to the Disney balance sheet. With current prices ma rking the stock at less than nine times fiscal 1965 earnings, and with fiscal 1966 earnings likely to hold around this level, the stock contin- ues to appear attractive. General Dynamics (53 3/4) has traveled a long road since the deficit years of 1960- 1961 when the ill-fated Convair commercial jets caused the company to post a loss of 17 per share over a two-year period. In the interim, management has been re-aligned, long term deb has been pared from 150 million to 92 million at the end of 1964, net working capital has in- creased four-fold and the current ratio has doubled. Reflecting this success, the stock was restored to a dividend basis eqrlier this year. . , ., Yet, to our mind, the improvement in 'the company has been only partially reflected in he price improvement in the stock from a 1962 low of 20 to a recent high of 55 1/4 which compares to a 1957 high of 685/8. Pre-tax earnings have been in a rising trend over the pas four years. With this year's pre-tax results just about equalling last year, this year's fully- taxed earnings could reach the 4.15-4.25 level vs. 3.77 in 1964. The most important thing bout these projected earnings, however, is that they reflect only a minimum of profit contri- ution from the F-111 contract, which should be one of the largest and most profitable single awards to any defense manufacturer in recent years. Company has received an initial contrac covering 431 aircraft, and the final value of this contract is expected to exceed 1. 5 billion. It could indeed be argued that General Dynamics at some twelve times 1965 ear-nings is cheap on the basis of its current representation in nuclear submarines, atomic power acti- ities, space sciences and electronics. When the potential revenue from the F-111 is added to 11 this, the stock indeed appears attractive for capital gains purposes at current levels. Dow-Jones Ind. 948. 16 Dow-Jones Rails 242.33 ANTHONY W. TABELL WALSTON & CO. INC. WNSOI