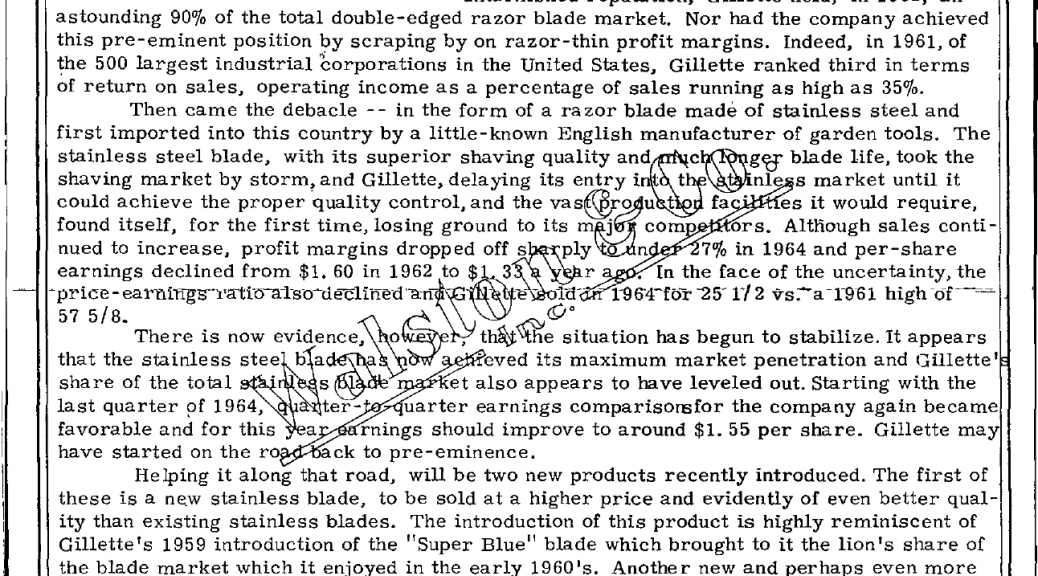 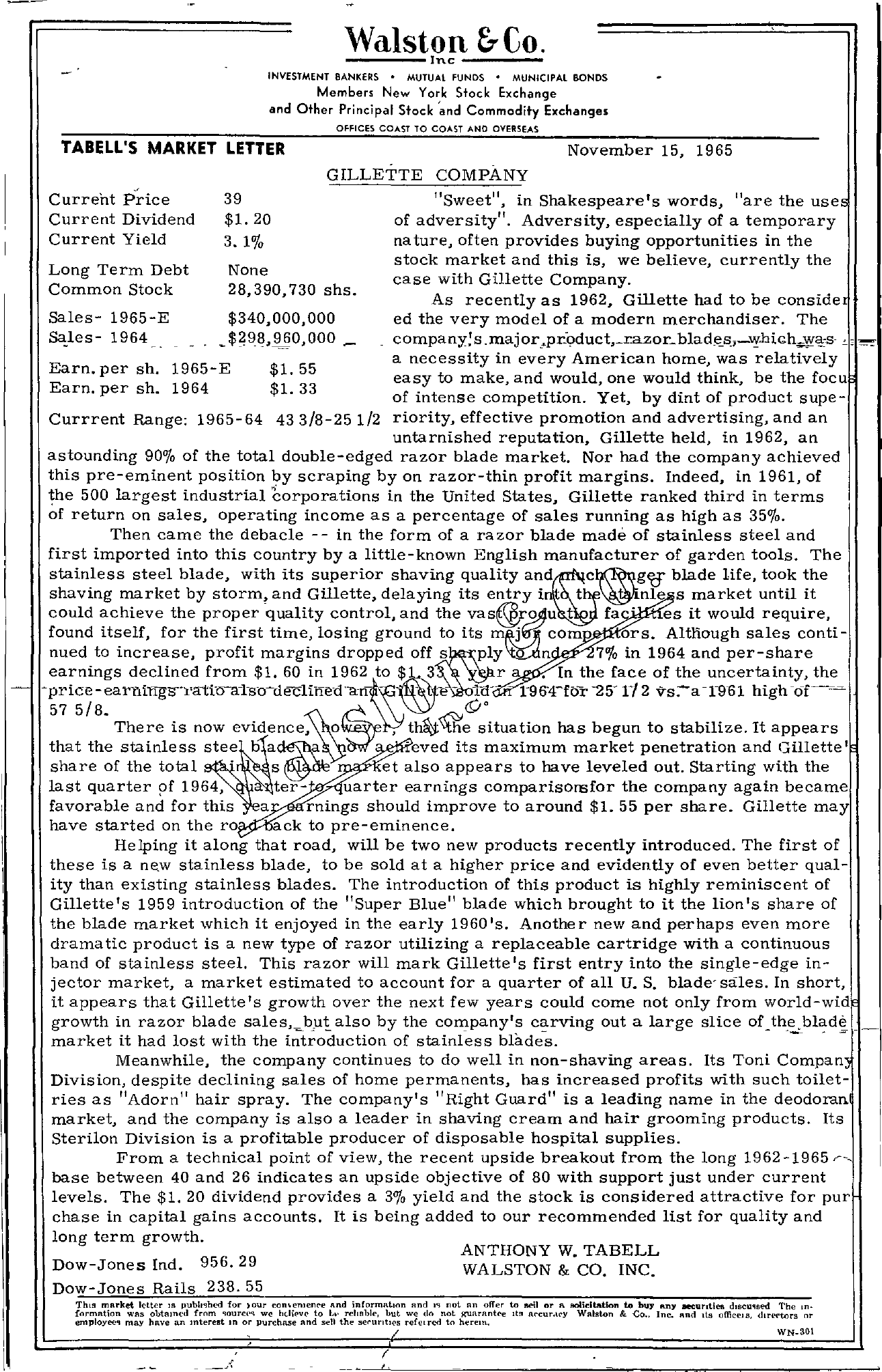 TABELL'S Walston &- Co. Inc INVESTMENT BANKERS MUTUAL FUNDS MUNICIPAL SONDS Members New York Stock Exchange and Other Principal Stock 'and Commodity Exchanges OFFICES COAST TO COAST ANO OVERSEAS MARKET LETTER November 15, 1965 GILLETTE COMPANY Curreht Price Current Dividend Current Yield Long Term Debt Common Stock Sales- 1965-E Sales- 1964 39 1. 20 3. 10/0 None 28,390,730 shs. 340,000,000 P98,960,000 Sweet, in Shakespeare's words, are the use of adversity. Adversity, especially of a temporary na ture, often provides buying opportunities in the stock market and this is, we believe, currently the case with Gillette Company. As recently as 1962, Gillette had to be conside ed the very model of a modern merchandiser. The s, Earn. per sh. 1965-E Earn. per sh. 1964 1. 55 1. 33 a necessity in every American home, was relatively easy to make, and would, one would think, be the focu of intense competition. Yet, by dint of product supe- Currrent Range 1965-64 433/8-251/2 riority, effective promotion and advertising, and an untarnished reputation, Gillette held, in 1962, an astounding 900/0 of the total double-edged razor blade market. Nor had the company achieved this pre-eminent position by scraping by on razor-thin profit margins. Indeed, in 1961, of the 500 largest industrial corporations in the United States, Gillette ranked third in terms of return on sales, operating income as a percentage of sales running as high as 350/0. Then came the debacle – – in the form of a razor blade made of stainless steel and first imported into this country by a little-known English manufacturer of garden tools. The stainless steel blade, with its superior shaving quality shaving market by storm, and Gillette, delaying its entry i t could achieve the proper quality control, and the vasr01u t fa' blade life, took the s market until it es it would require, found itself, for the first time, losing ground to its nwj6)j' com ors. AltYiough sales conti- nued to increase, profit margins dropped 70/0 in 1964 and per-share earnings declined from 1. 60 in 1962 to r a . In the face of the uncertainty, the 1964-fo1 '25- r/2 vs-a -r961 high e;There is now evidence, 0 situation has begun to stabilize. It appears that the stainless stee b 'eved its maximum market penetration and Gillette' share of the total . s et also appears to have leveled out. Starting with the last quarter 1964, ter- uarter earnings comparisomfor the company again became favorable and for this have started on the ro rnings should improve to around 1. 55 per share. Gillette may ck to pre-eminence. Helping it along that road, will be two new products recently introduced. The first of these is a ne.w stainless blade, to be sold at a higher price and evidently of even better qual- ity than existing stainless blades. The introduction of this product is highly reminiscent of Gillette's 1959 introduction of the Super Blue blade which brought to it the lion's share of the blade market which it enjoyed in the early 1960's. Another new and perhaps even more dramatic product is a new type of razor utilizing a replaceable cartridge with a continuous band of stainless steel. This razor will mark Gillette's first entry into the single-edge injector market, a market estimated to account for a quarter of all U. S. blade' sales. In short, it appears that Gillette's growth over the next few years could come not only from world-wid growth in razor blade also by the company's carving out a large slice ofJhe.blade market it had lost with the introduction of stainless – Meanwhile, the company continues to do well in non-shaving areas. Its Toni Compan Division, despite declining sales of home permanents, has increased profits with such toilet- ries as Adorn hair spray. The company's Right Guard is a leading name in the deodoran market, and the company is also a leader in shaving cream and hair grooming products. Its Sterilon Division is a profitable producer of disposable hospital supplies. From a technical point of view, the recent upside breakout from the long 1962 -1965, base between 40 and 26 indicates an upside objective of 80 with support just under current levels. The 1. 20 dividend provides a 30/0 yield and the stock is considered attractive for pur chase in capital gains accounts. It is being added to our recommended list for quality and long term growth. Dow-Jones Ind. 956.29 ANTHONY W. TABELL WALSTON & CO. INC. Dow-Jones Rails 238. 55 ThIS market letter lS Ilubh'lhed for )our And informatIon find 1'1 rIOt nn offer to sell or ft 8OI.iclWion to buy Rny aecurltlCfl dU!Cll'lSed The In. formation WfiS ObtfllRCti from we hdi('v(' to I, rehahlt', hut we do not Its RlCur.IlY Walston & Co., Ine. nnd lls officcls, hrt''tors or employcc'! may have an mlerest In or purchase and sell the selUrltl('5 refctrcd to herem. WN.301 ,( ,