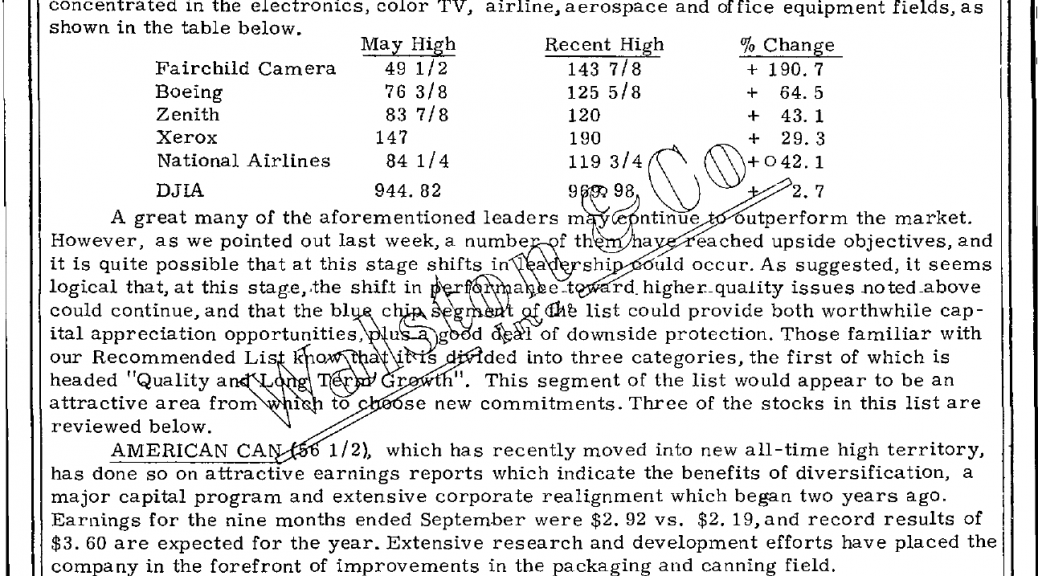 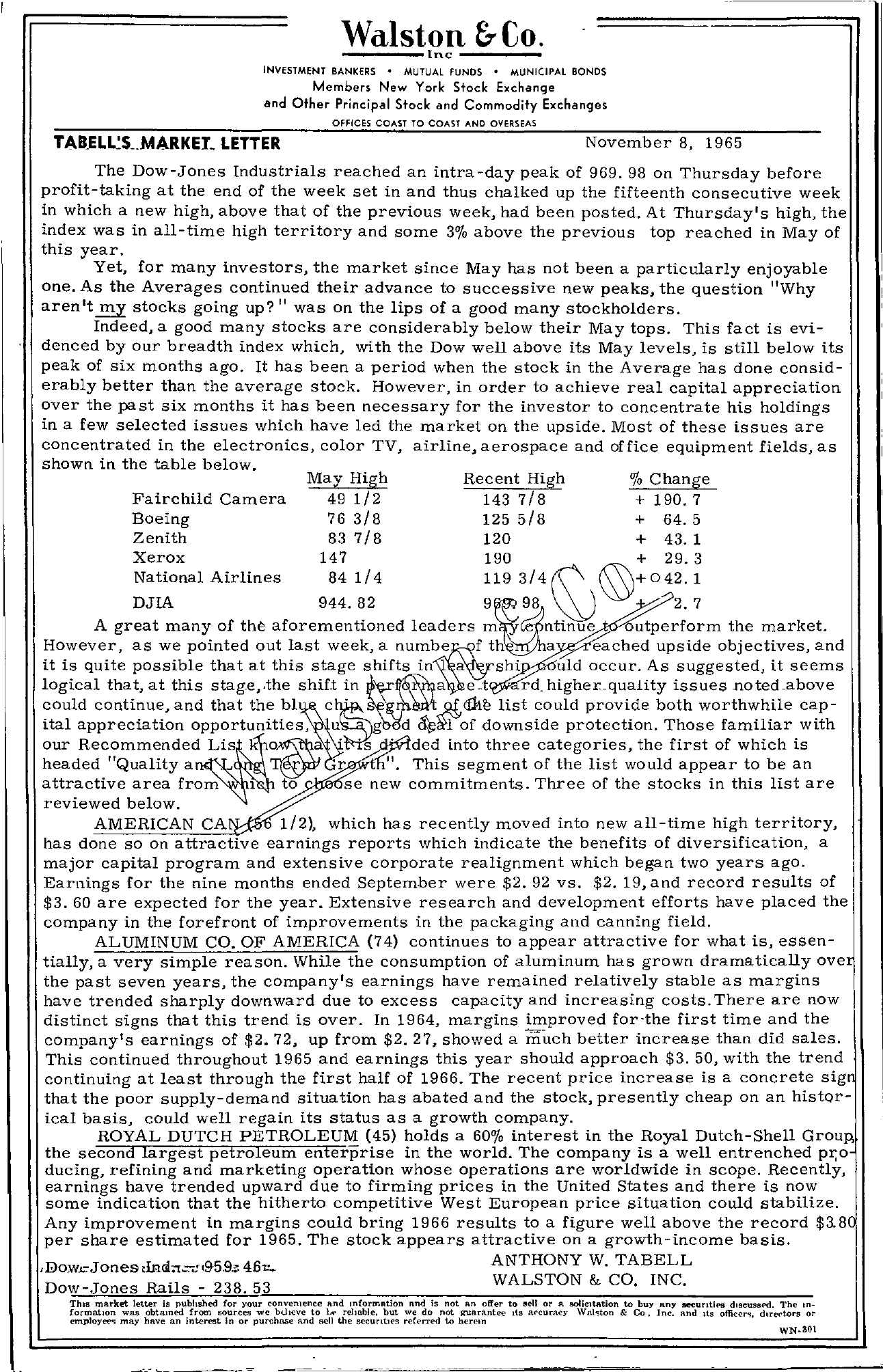 Walston &Co. Inc INVESTMENT BANKERS MUTUAL FUNDS MUNICIPAL BONDS Members New York Stock Exchange and Other Principal Stock and Commodity Exchanges OFFICES COAST TO COAST AND OVERSEAS MARKEr LETTER November 8, 1965 The Dow-Jones Industrials reached an intra-day peak of 969.98 on Thursday before profit-taking at the end of the week set in and thus chalked up the fifteenth consecutive week in which a new high, above that of the previous week, had been posted. At Thursday's high, the index was in all-time high territory and some 30/0 above the previous top reached in May of this year. Yet, for many investors, the market since May has not been a particularly enjoyable one. As the Averages continued their advance to successive new peaks, the question Why stocks going up was on the lips of a good many stockholders. Indeed, a good many stocks are considerably below their May tops. This fact is evi- denced by our breadth index which, with the Dow well above its May levels, is still below its peak of six months ago. It has been a period when the stock in the Average has done consid- erably better than the average stock. However, in order to achieve real capital appreciation over the past six months it has been necessary for the investor to concentrate his holdings in a few selected issues which have led the market on the upside. Most of these issues are concentrated in the electronics, color TV, airline, aerospace and office equipment fields, as shown in the table below. May High Recent High Change Fairchild Camera 49 1/2 143 7/8 190.7 Boeing 763/8 1255/8 64.5 Zenith 837/8 120 43.1 Xerox 147 190 29.3 National Airlines DJIA 841/4 944. 82 119 3/4(\' , 9 aB \2J 2. 7 A great many of the aforementioned leaders m ntinue outperform the market. However, as we pointed out last week, a th a eached upside objectives, and it is quite possible that at this stage shifts in a shi uld occur. As suggested, it seems logical that, at this stage,.the shift in e.t rd higher-quality issuesnoted.above could continue, and that the ital appreciation opportunities, u \ gd list could provide both worthwhile capdownside protection. Those familiar with our k . 's . ded into three categories, the first of which is headed Quality a r . This segment of the list would appear to be an attractive area from 1 to se new commitments. Three of the stocks in this list are reviewed below. AMERICAN CA 1/2), which has recently moved into newall-time high territory, has done so on attractive earnings reports which indicate the benefits of diversification, a major capital program and extensive corporate realignment which began two years ago. Earnings for the nine months ended September were 2.92 vs. 2. 19, and record results of 3.60 are expected for the year. Extensive research and development efforts have placed the company in the forefront of improvements in the packaging and canning field. ALUMINUM CO. OF AMERICA (74) continues to appear attractive for what is, essen- tially, a very simple reason. While the consumption of aluminum has grown dramatically ove the past seven years, the company's earnings have remained relatively stable as margins have trended sharply downward due to excess capacity and increasing costs. There are now distinct signs that this trend is over. In 1964, margins improved for-the first time and the company's earnings of 2.72, up from 2. 27, showed a much better increase than did sales. This continued throughout 1965 and earnings this year should approach 3.50, with the trend continuing at least through the first half of 1966. The recent price increase is a concrete sig that the poor supply-demand situation has abated and the stock, presently cheap on an histor- ical basis, could well regain its status as a growth company. ROYAL DUTCH PETROLEUM (45) holds a 600/0 interest in the Royal Dutch-Shell Group, the second largest petroleum enterprise in the world. The company is a well entrenched pr;o dueing, refining and marketing operation whose operations are worldwide in scope. Recently, earnings have trended upward due to firming prices in the United States and there is now some indication that the hitherto competitive West European price situation could stabilize. Any improvement in margins could bring 1966 results to a figure well above the record 3.8 per share estimated for 1965. The stock appears attractive on a growth-income basis. ,EOWrJones dnCil..,.-. ,9,5.9., 46,,Dow-Jones Rails – 238. 53 ANTHONY W. TABELL WALSTON & CO. INC. ThiS market letter is pubhshed for your convenience hnd Information Rnd is not an offer to !leU or II. 3OIicltfttion to buy Rny 5eC!UTltlPS dlfleuss-M. The tn- formabon was obtamed from sources we bUlCve to IN relmble. but we do not guarantee Its arcuracy \Va!;ton & Co, Inc. and Its officN'! dlT('rtors or employee,; may have an interest In or purchase and sell the secuntif'S referred to herein . WN801