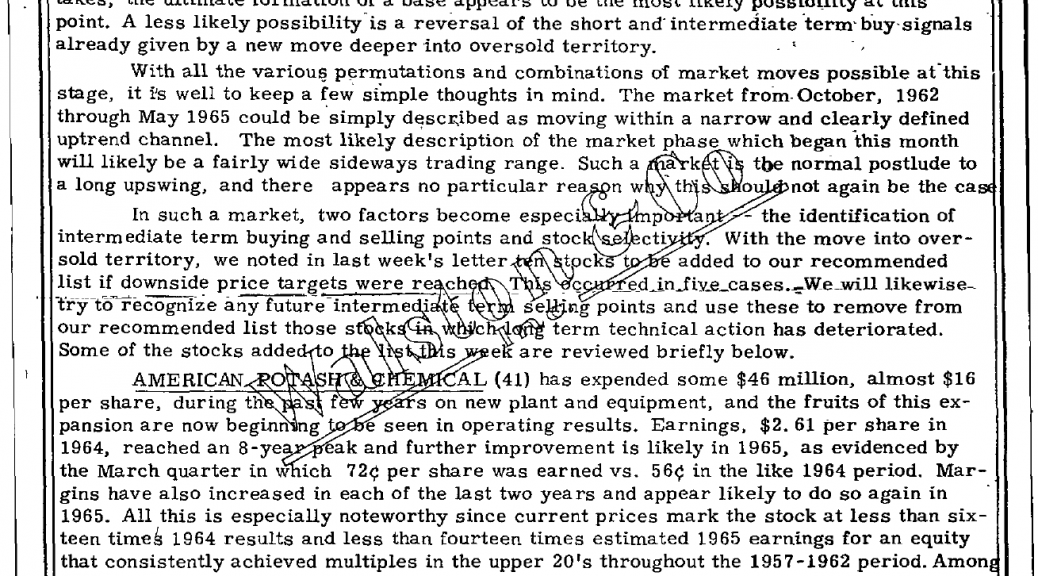 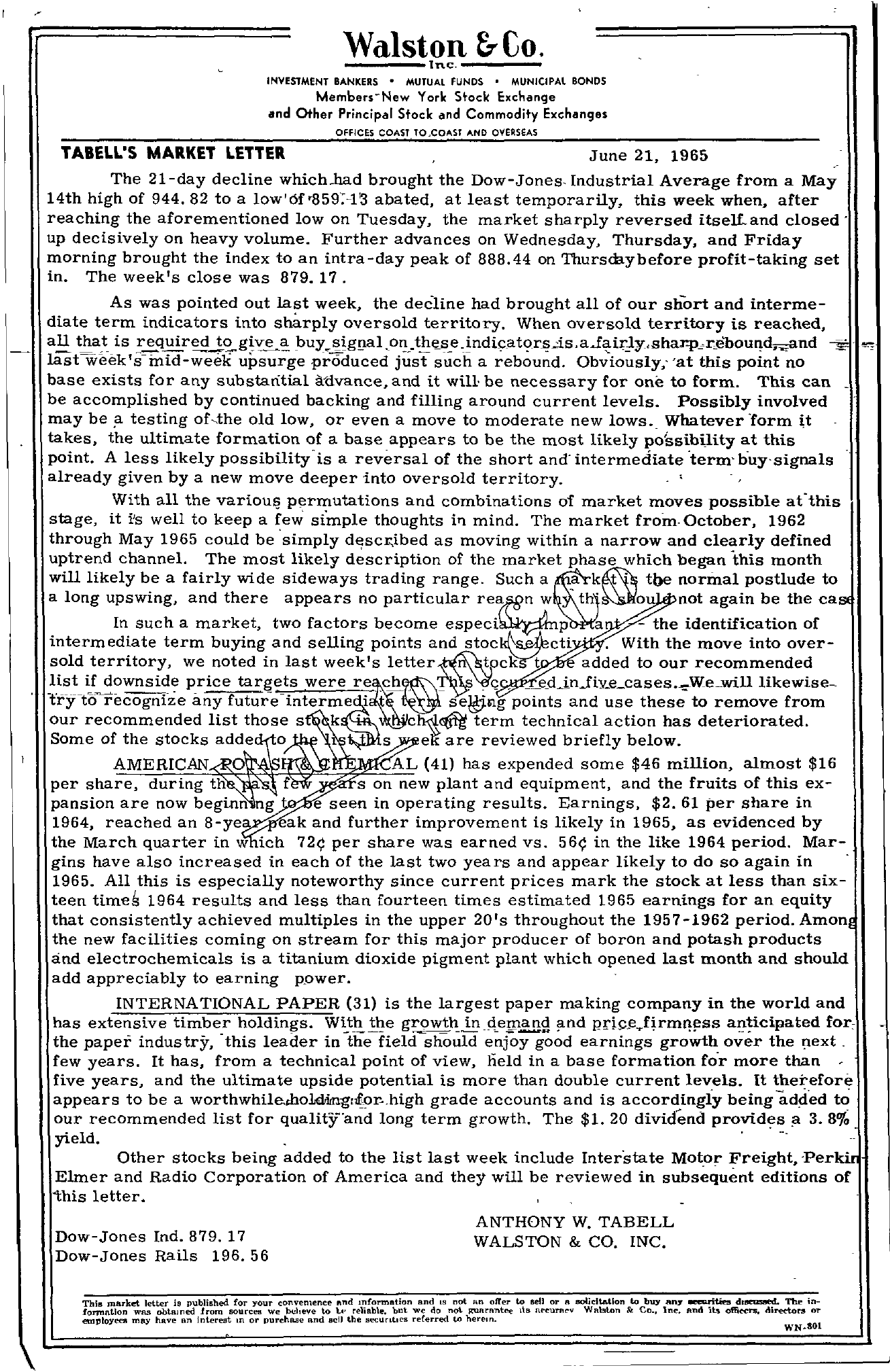 Walston- Inc, &Co. INVESTMENT BANKERS MUTUAL FUNDS MUNICIPAL BONDS MembersNew Stock and Other Principal Stock and Commodity Exchanges OFFICES COAST TO .COAST AND OVERSEAS TABELL'S MARKET LETTER June 21, 1965 The 21-day decline which.had brought the Dow-Jones- Industrial Average from a May 14th high of 944.82 to a low'of'859-1'! abated, at least temporarily, this week when, after reaching the aforementioned low on Tuesday, the market sharply reversed itself,and closed' up decisively on heavy volume. Further advances on Wednesday, Thursday, and Friday morning brought the index to an intra-day peak of 888.44 on Thursdaybefore profit-taking set in. The week's close was 879. 17 . As was pointed out last week, the decline had brought all of our short and intermediate term indicators into sharply oversold territory. When oversold territory is reached, -. .aE. that is lastweek's-mid-weeI upsurge produced just such a rebound. Obviously; 'at this point no base exists for any substantial advance, and it wiU be necessary for one to form. This can be accomplished by continued backing and filling around current levels. Possibly involved may be .a testing oLthe old low, or even a move to moderate new lows .. Whatever 'form it takes, the ultimate formation of a base appears to be the most likely po\'sibility at this point. A less likely possibility'is a reversal of the short and' intermediate 'term- bUY'Signals already given by a new move deeper into oversold territory. With all the variou!i permutations and combinations of market moves possible at'this stage, it 1S well to keep a few simple thoughts i'1 mind. The market froin,October, 1962 through May 1965 could be simply as moving within a narrow and clearly defined uptrend channel. The most likely description of the market phase which began this month will likely be a fairly wide sideways trading range. Such a iSa tbe normal postlude to a long upswing, and there appears no particular not again be the ca In such a market, two factors become a – the identification of intermediate term buying and selling points and . With the move into over- sold territory, we noted in last week's t added to our recommended list if downside price targets were lry-torecognize any future intermiit seging points and use these to remove from our recommended list those s k' term technical action has deteriorated. Some of the stocks adde 0 s !eff are reviewed briefly below. AMERICAN 0 AL (41) has expended some 46 million, almost 16 per share, during tn s on new plant and equipment, and the fruits of this ex- pansion are now beginn ng e seen in operating results. Earnings, 2. 61 per share in 1964, reached an 8-yea eak and further improvement is likely in 1965, as evidenced by the March quarter in w ich 72 per share was earned vs. 56 in the like 1964 period. Mar- gins have also increased in each of the last two years and appear likely to do so again in ' 1965. All this is especially noteworthy since current prices mark the stock at less than six- teen 1964 results and less than fourteen times estimated 1965 earnings for an equity that consistently achieved multiples in the upper 20's throughout the 1957-1962 period. Amon the new facilities coming on stream for this major producer of boron and potash products and electrochemicals is a titanium dioxide pigment plant which opened last month and should add appreciably to earning p.ower. INTERNATIONAL PAPER (31) is the largest paper making company in the world and has extensive timber holdings. lnd for, the paper industry, 'this leader in the field should enjoy good earnings growth over the tlext , few years. It has, from a technical point of view, field in a base formation fo'r more than five years, and the ultimate upside potential is more than double current levels. It therefore appears to be a worthwhile.,ho1d.itnglll'cor-.high grade accounts and is accordingly being add'ed to our recommended list for qualityan.d long term growth. The 1. 20 dividend provides a 3. yield. Other stocks being added to the list last week include Interstate Motor Freight, 'Perki Elmer and Radio Corporation of America and they will be reviewed in subsequent editions of 1his letter. Dow-Jones Ind. 879. 17 Dow-Jones Rails 196.56 ANTHONY W. TAB ELL WALSTON & CO. INC. This market letter Is published for your con,,-emence And mformation and IS not fln olter to Bell or A. soIidtatlon to buy An,. -.rities The in- formation was obtained from sources we believe to t.' reliable. but we do not JNnIRl'Itee Its n((urhCV Wahlon & Co., Inc. I\nd its oftircrs. direrton! qr emJ'JIOyeeB may have an Interest U\ or purdlfl..se and Bell the seUntH's referred t.o herein.