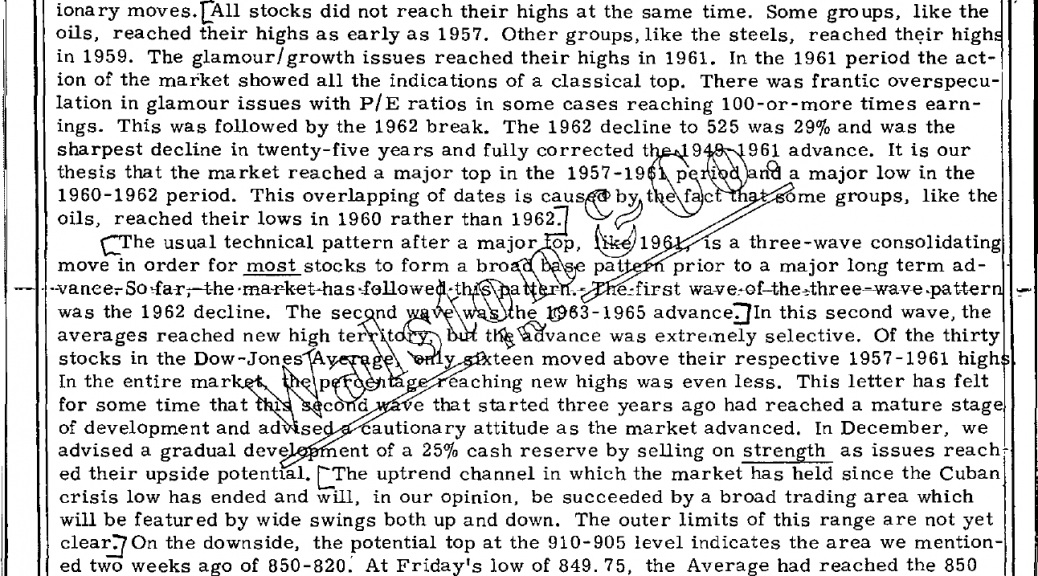 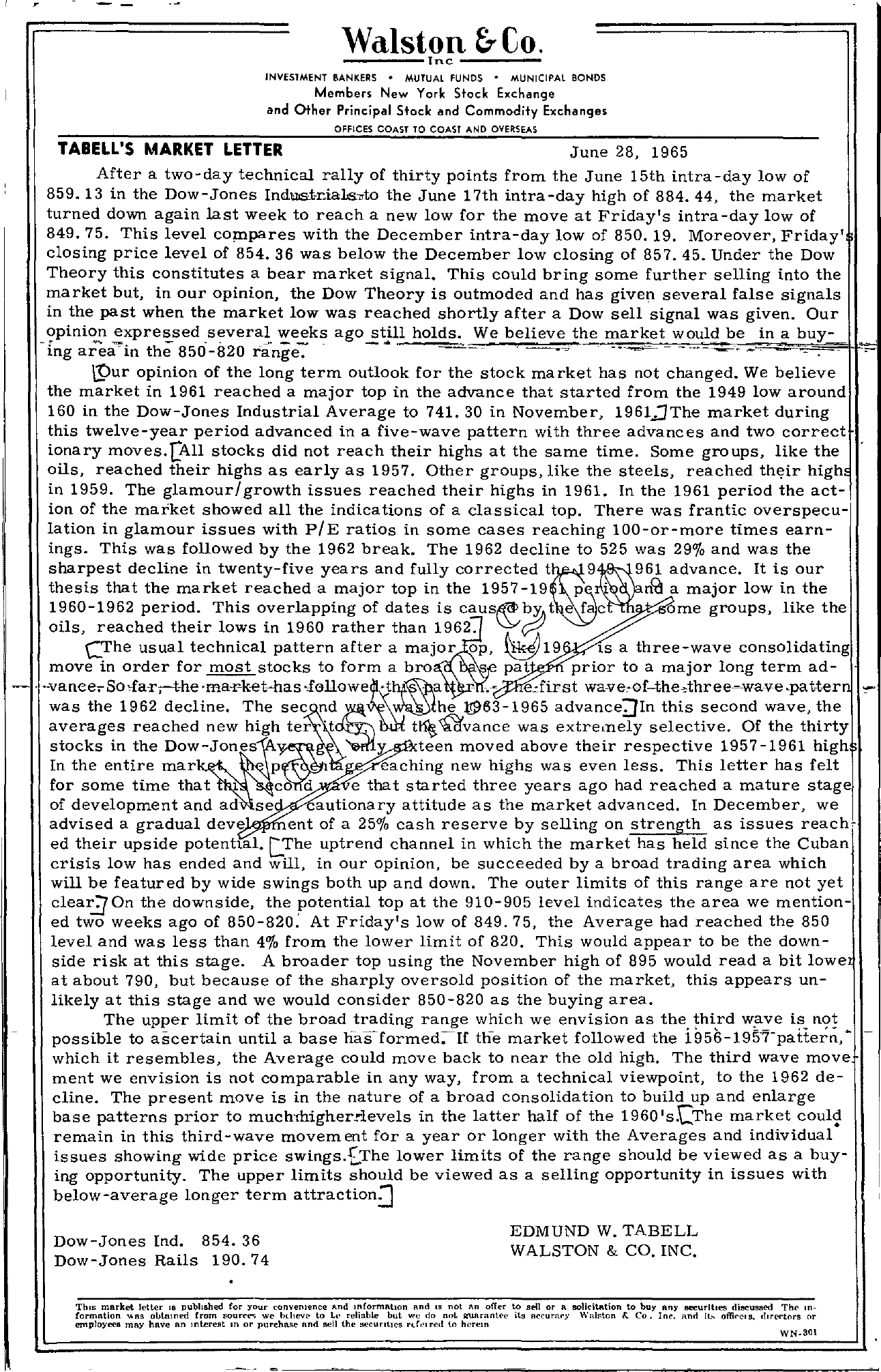 , — Walston &- Co. Inc INVESTMENT BANKERS MUTUAL fUNDS MUNICIPAL BONOS Members New York Stock Exchange and Other Principal Stock and Commodity Exchanges TABEll'S MARKET lETTER OFFICES COAST TO COAST AND OVERSEAS June 28, 1965 After a two-day technical rally of thirty points from the June 15th intra-day low of 859.13 in the Dow-Jones Ind\lJSctr.ia1srto the June 17th intra-day high of 884. 44, the market turned down again last week to reach a new low for the move at Friday's intra-day low of 849.75. This level compares with the December intra-day low of 850. 19. Moreover, Friday' closing price level of 854.36 was below the December low closing of 857.45. Under the Dow Theory this constitutes a bear market signal. This could bring some further selling into the market but, in our opinion, the Dow Theory is outmoded and has give\l several false signals in the past when the market low was reached shortly after a Dow sell signal was given. Our opinion expressed several weeks ago still holds. We believe the market would be in a buy- mg area In…….. '!. the 850- -8- 20 ra-ng- e.-… – – .. , . – – – – JZ – \9ur opinion of the long term outlook for the stock market has not changed. We believe the market in 1961 reached a major top in the advance that started from the 1949 low around 160 in the Dow-Jones Industrial Average to 741. 30 in November, 1961..JThe market during this twelve-year period advanced in a five-wave pattern with three advances and two correct ionary moves. CAll stocks did not reach their highs at the same time. Some groups, like the oils, reached their highs as early as 1957. Other groups, like the steels, reached high in 1959. The glamour/ growth issues reached their highs in 1961. In the 1961 period the act- ion of the market showed all the indications of a classical top. There was frantic overspecu- lation in glamour issues with pIE ratios in some cases reaching 100-or-more times earn- ings. This was followed by the 1962 break. The 1962 decline to 525 was 29 and was the sharpest decline in twenty-five years and fully corrected advance. It is our thesis that the market reached a major top in the 1957-19 p – nd a major low in the 1960-1962 period. This overlapping of dates is ef c orne groups, like the oils, reached their lows in 1960 rather than 1962. \YV CI'he usual technical pattern after a major op, IS a three-wave consolidating move in order for most stocks to form a bro pat prior to a major long term ad- – – – -.- efirst was the 1962 decline. The ,WWthe ll)63-1965 advanceJIn this second wave, the averages reached new high ter 't was extremely selective. Of the thirty stocks in the Dow-Jones teen moved above their respective 1957-1961 high In the entire mar p eaching new highs was even less. This letter has felt for some time that 1 CO d e that started three years ago had reached a mature stage of development and ad autionary attitude as the market advanced. In December, we advised a gradual deve ent of a 25 cash reserve by selling on strength as issues ed their upside potential. C.The uptrend channel in which the market has held since the Cuban crisis low has ended and will, in our opinion, be succeeded by a broad trading area which will be featured by wide swings both up and down. The outer limits of this range are not yet clearJOn the downside, the potential top at the 910-905 level indicates the area we mention- ed two weeks ago of 850-820. At Friday's low of 849.75, the Average had reached the 850 level and was less than 4 from the lower limit of 820. This would appear to be the down- side risk at this stage. A broader top using the November high of 895 would read a bit lowe at about 790, but because of the sharply oversold position of the market, this appears un- likely at this stage and we would consider 850-820 as the buying area. The upper limit of the broad trading range which we envision as the. n,! possible to ascertain until a base nasformed–If toe market followed the 1956-195'Tpattern,- – which it resembles, the Average could move back to near the old high. The third wave move ment we envision is not comparable in any way, from a technical viewpoint, to the 1962 de- cline. The present move is in the nature of a broad consolidation to build up and enlarge base patterns prior to muchThigherdevels in the latter half of the 1960 's(The market cou11 remain in this third-wave movement for a year or longer with the Averages and individual issues showing wide price swings.The lower limits of the range should be viewed as a buy- ing opportunity. The upper limits should be viewed as a selling opportunity in issues with below-average longer term attraction Dow-Jones Ind. 854. 36 Dow-Jones Rails 190.74 EDMUND W. TABELL WALSTON & CO. INC. ThiS market letter IS pubhshed ror your convenience p.nd InformatIOn Rnn IS not Rn ofter to seU or R solidt.ation to buy fmy aeeurltaes Th(' In- formntlon \l,RS obtamed from sour('t') we h,-heve to Lt' reliable but we cio not R'Unrant('e its Ilccurl\ry v..'nlRton Co. Int'. Rnd t,.. offirclS. dlrertors or employees may have an mterest In or purchllSe and sell the rdt'lred to herein WN301